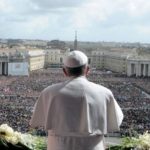 The modern Roman Catholic Church [RCC] is the church that Constantine built [1]. In the early 300s A.D. Emperor Constantine gave the church wealth, political power and combined the worship of the son-god Mithra, the official religion of the Roman Empire, with Christianity [2]. It was during this time that the early church – poor, persecuted and pure […]