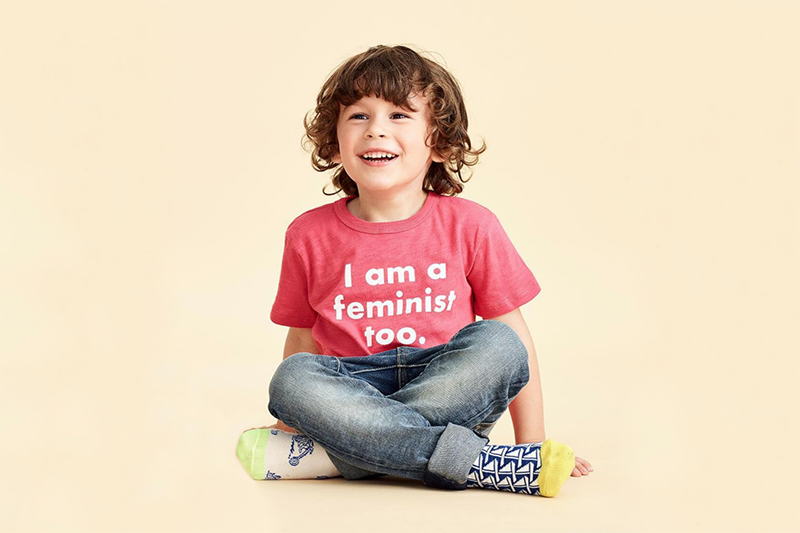 Feminists for decades have been trying to destroy the image of the father, the husband, masculinity, womanhood, family and marriage. They want to empower women to become the “man” in every way, and they want to turn men into girly, feminine, gender neutral humans. The latest example is the mocking of boys and young men through a marketing campaign by the fashion brand J. Crew. It features a long-haired boy wearing a pink t-shirt with the words “I’m a feminist too.” This is creating a lot of controversy and debate on social media.

This is part of a plan to reverse the gender roles given to us by God. They want to diminish the masculinity in boys and the femininity in girls. The radical feminist movement that is sweeping society believes that masculinity is toxic in men but necessary in women. The feminization of men and boys and the masculinization of women and girls is a social experiment designed to bring confusion and destroy western civilization. This agenda is doing a great harm to children as they are being brain-washed.

Feminists are tearing down the order that God has established. In their effort to be free and liberated they are actually sinking into a moral decay that is helping to perpetuate the breakdown of society. They are telling women to abandon the marriage institution established by God because they believe that traditional marriage is a curse to all women. The loving relationship between one man and one women which has been ordained by God is under attack from all sides. The 2 minute video below highlights the feminist’s attitude towards men and marriage.

Hatred of men, contempt for married women, the elimination of gender identity and the so-called “empowerment” of women to a place which God has not approved is the basis of the modern feminist movement.

This liberal agenda is affecting the churches as women believe they should be identical to men in ever role. Feminism is NOT about equality and protecting women’s rights. It’s about changing the order and roles established by God for all of mankind. It robs women of the dignity and honor of womanhood and and robs men of the honor and masculinity of manhood.