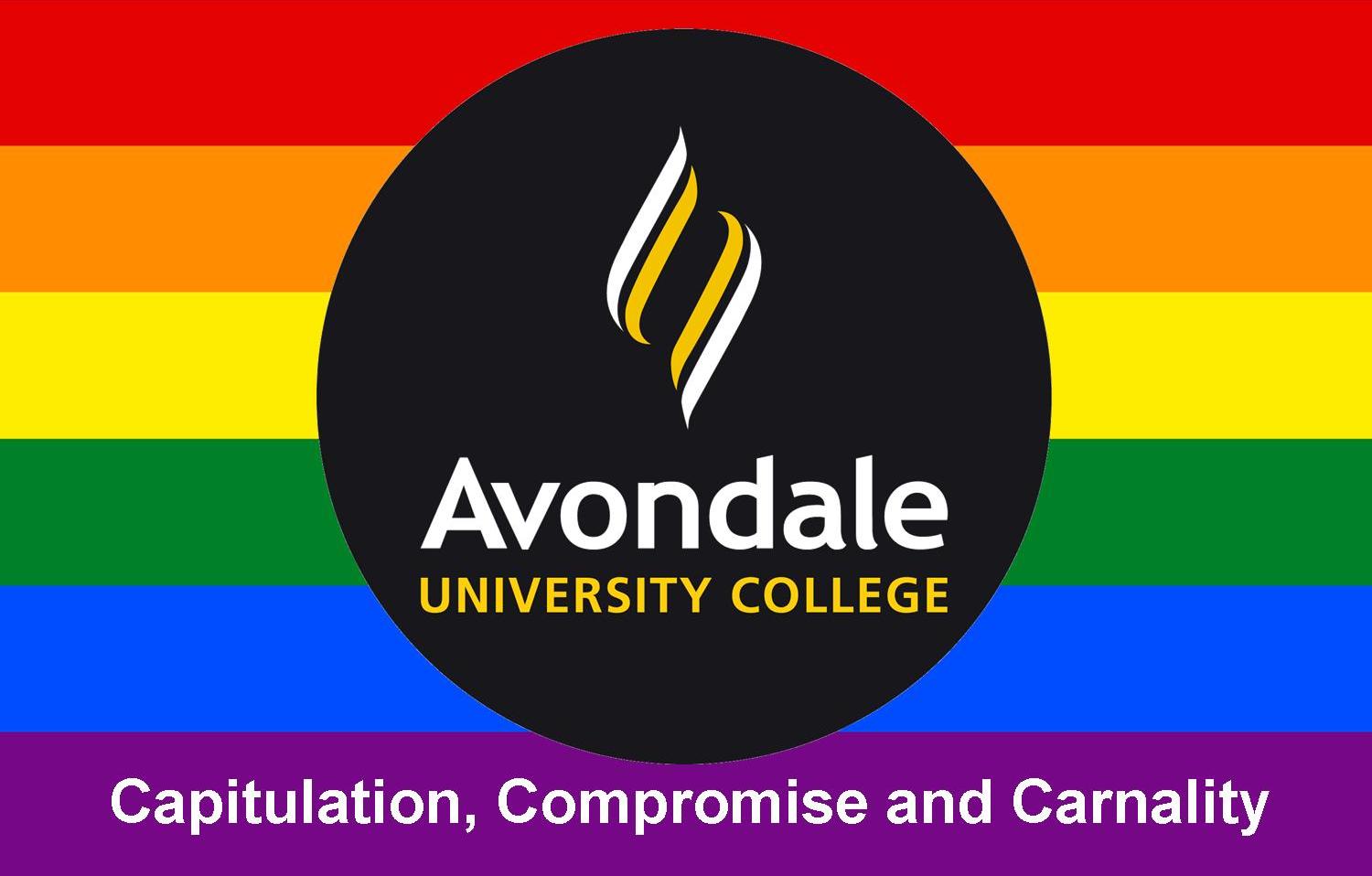 Maybe Avondale University College should adopt this as their new flag and motto: “Capitulation, Compromise and Carnality.”

The debate over homosexuality will soon tear Seventh-day Adventists apart. It will force our people to declare where we stand on issues of sexuality and biblical interpretation. One by one, institutions, churches and church leaders are rejecting biblical truth and embracing the world’s agenda. The notion that we can somehow embrace the Bible and be an affirming, inclusive and diverse church when it comes to sodomy is a fatal delusion that is dragging many down.

Fulcrum7.com has documented the most recent case involving Avondale University College in three different articles referenced below. This once great Seventh-day Adventist institution is collapsing and burning as some of their leaders are tolerating, embracing and promoting grave theological errors. Avondale has completely gone over to the dark side on the LGBT+ issue.

Additionally, an Avondale-sponsored podcast hosted by two Seventh-day Adventist ministers is allowing some of their guests to recommend pro-LGBT+ affirmation resources to those “confused” about their sexuality. [2] This Avondale-sponsored podcast does not articulate biblical truth, but rather a liberal agenda that accommodates homosexuality. It is obvious that our central biblical message on sexuality is no longer being defended or believed.

If that weren’t enough, Glenn Townend, president of the South Pacific Division of Seventh-day Adventists and chairman of the Avondale University College Council, came out to downplay the new sexual revisionism that is taking place in Avondale. Like the typical politician, he first claims that Avondale defends the historic Seventh-day Adventist position on same-sex marriage, while simultaneously saying that we must be compassionate and welcome sodomy. President Glenn Townend stated:

“Jesus affirmed the dignity of all human beings and reached out compassionately to persons … I personally wish that the Seventh-day Adventist Church was known for its compassion for those who are from the LGBTQI+ community, thus really showing the love of God to them … Avondale, as a tertiary institution, upholds the Bible as the only rule of faith and affirms the fundamental beliefs of the church … The mention of pederasty (man-child sexual relationships) was a passing comment and not the main intent of the message … The podcast guest may sometimes give different viewpoints to that of the church and the presenters, but the presenters are church pastors who support the doctrines of the church.” [3]

This is a perfect example on how to cave to the culture while trying to save face with the conservatives in the church. Rather than standing firm on core Christian values and REQUIRING THAT ALL STUDENTS AND STAFF ADHERE TO THEM, a division president has taken the easy way out and made a full retreat. President Glenn Townend used the “dignity of all human beings” argument. In other words, “We are all made in the image of God.” Of course we are, but why is the leadership allowing Avondale’s vulnerable and impressionable youth to be so damaged by the radical sexual agenda of the LGBT+ anarchists?

Why doesn’t Glenn Townend stand up and seek to protect our youth, rather than throw them to the wolves of social engineering? Don’t they care about their duty to protect our young people? Have we forgotten what Jesus said about defending our youngest and most vulnerable members and His solution to those who cause them to sin or err?

“But whoso shall offend one of these little ones which believe in me, it were better for him that a millstone were hanged about his neck, and that he were drowned in the depth of the sea.” Matthew 18:6.

The true Adventist message has been drowned out by leaders who don’t want to talk about sin; no, they prefer to talk about social justice, diversity, inclusion and human dignity. Talking about sin means identifying homosexuality as bad behavior, and the leadership in Australia does not want to sound critical and be rejected by our culture.

What good is having an Adventist school if we cannot expect the staff to express the biblical position on sex and marriage? We might as well have a pagan school. We are just another secular institution pushing the same worldly agenda. Biblical witness and Christian morality no longer mean anything, and claiming to be an Adventist institution serves no purpose other than simply to get the enrollment fees from unsuspecting Seventh-day Adventist families.

To contact President Glenn Townend, you can email him here: GlennTownend@adventist.org.au