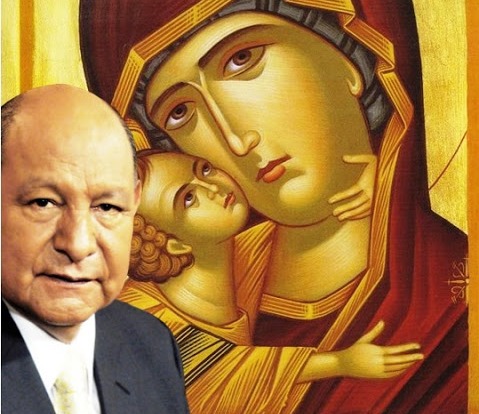 Pastor Alejandro Bullón Páucar is a prominent Seventh-day Adventist from South America. He is known for hosting the “It Is Written” television program in Brazil (Portuguese), for being on 200 different radio programs throughout Latin America (Portuguese and Spanish), for his evangelistic campaigns and for preaching all over the world. [1]

The Seventh-day Adventist Church has published more than 20 million copies of a book he authored called La Unica Esperaza (The Only Hope) which has been distributed by missionaries throughout Brazil, Uruguay, Argentina, Paraguay, Chile, Bolivia, Perú and Ecuador. [1] Many of Pastor Bullón’s sermons can be found on Youtube [2] or on different websites in written form. [3]

A Roman Catholic website in Brazil called www.icatolica.com is claiming that Pastor Bullón, one of “the most respected pastors among Seventh-day Adventists,” is extolling the “holiness and virginity of Mary.” The Roman Catholic website was more than happy to published part of Pastor Bullón’s televised sermon from an It Is Written broadcast entitled “Enchei as Vasilhas” (Fill the Canisters) in which he praises the virtues of the “Holy Virgin Mary.” [4]

We are republishing Pastor Bullón’s statement on the Virgin Mary in its entirety as published on www.icatolica.com. The Catholics obtained the text to Pastor Bullón sermon from a website that contains his sermons in printed form [5] Pastor Bullón said:

I will now deal with a very delicate matter: the Holy Virgin Mary. As we all know, the enemy is very cunning. He does not want balanced Christians. He wants to lead us into fanaticism or liberalism. This is true of any subject in the Bible.

You see, the enemy leads many Christians who have the Bible in their hands, to say the following: “The Virgin Mary is not important. She was a woman like any other. We do not have to revere her; we do not have to talk much about it, because that is idolatry.”

Today, the figure of the virgin Mary stands as an example of life, surrender and communion with God. That is why she deserves all our respect and our reverence. It deserves that we love this and that we teach more of the wonderful life that she lived. But as I said, the enemy does not want balanced people. Some Christians come to the point of being disrespectful to others, deceiving some, and leading them to different extremes.

These people act in this way with all sincerity. In desperation, they seek the help of the Holy Virgin Mary. And then there are Christians on the other hand who look at them with accusing eyes and say, “You are idolaters. They love a human being.”

They ignore the sincerity with which these people are seeking to reach God.

At the wedding of Canaan in Galilee, people had Jesus present, but instead of going to Him, they went to the Virgin Mary, and she, with all affection, said to them:

“Children, I can not solve this problem, but I know the only person who can do this for you.” And she took them to Jesus. If she were alive today, she would surely do the same.

All right, you might be telling me, “Pastor, I do not have her as my savior. She is only my intercessor, my intermediary, my mediator.”

“For there is one God, and one Mediator between God and men, the man Christ Jesus.” (I Timothy 2: 5) That’s what the Bible says. It’s Jesus Christ and no one else. That is why when the men at the wedding of Canaan came to Mary asking for help, she, with the greatest affection, took them to Jesus. Jesus was the only one who could solve problems.

If the Holy Virgin Mary, whom I love and respect very much, because when God chose a woman to raise His Son in this world He chose this pious woman – if she was alive and today could speak – when a person would come to her for help, she would hug them and perhaps give them a kiss of love and affectionately would say: “Son, I thank you for the sincerity of heart with which you come to me, but I can not do what you ask of me.”

Let us now return to the marriage of Canaan in Galilee and let us see what Mary said to the men: “Do you want the wine problem solved? So do whatever He tells you to do.”

This is the most beautiful statement that the Holy Virgin Mary left us. If He commands you to go to the right, go to the right; if He says to go left, go left. Please do not try to change what He told you to do. Observe what He has commanded.

We humans do not have the humility to go to the Bible and do what He tells us to do. We are always trying to correct God and tend to interpret and put our opinions. If what we believe matches with what is written, that is fine. But when it does not fit with our way of being and living, then we try to make some modifications that are convenient for us.

But the Virgin Mary says: “Do not do it. If you do not want to create problems for yourself, do everything He has commanded.”

Do you know why the Virgin Mary gave this advice? Because often the things that God asks of us seem crazy.

At Canaan in Galilee men were willing to obey Jesus. And you know what happened? Jesus said to them, “Fill those water bowls!”

The men looked at Jesus and said, “Lord, You are not understanding our problem. Our problem is not lack of water, but wine!

Pastor Bullón’s is trying to bridge the Biblical Mary with the Roman Catholic Mary. That’s impossible. The reality is that Roman Catholic devotion to Mary is in essence worship. In fact, they reverence Mary more than they worship the true and living God. The title Queen of Heaven and powers of Co-redemtrix attributed to Mary are total fabrications. Even the so-called perpetual “virginity” of Mary is not Biblical. Notice what New American Bible, the Roman Catholic-approved translation, says:

“When Joseph woke from sleep, he did as the angel of the Lord commanded him: he took his wife but knew her not until she had given birth to a son. And he called his name Jesus.” Matthew 1:24, 25.

Even the Catholic Bible says that he, Joseph, did not have sexual relations with her, Mary, UNTIL after she bore a son, Jesus. Joseph and Mary did have sexual relations after Jesus was born (see Matthew 13:55, 56).  The perpetual virginity of Mary is based on an unbiblical understanding of sex. Sex in marriage is not sinful but “holy and undefiled” (Hebrews 13:4). Mary didn’t defile herself by having sex with her husband Joseph.

Mary wasn’t always a virgin. She doesn’t help Jesus (John 2:4) She is no more blessed than all those who obey God (Luke 11:27, 28). And no, Pastor Bullón, we don’t reverence and venerate anyone but God alone (Revelation 22:8, 9). The following video is idolatry in the clearest form.