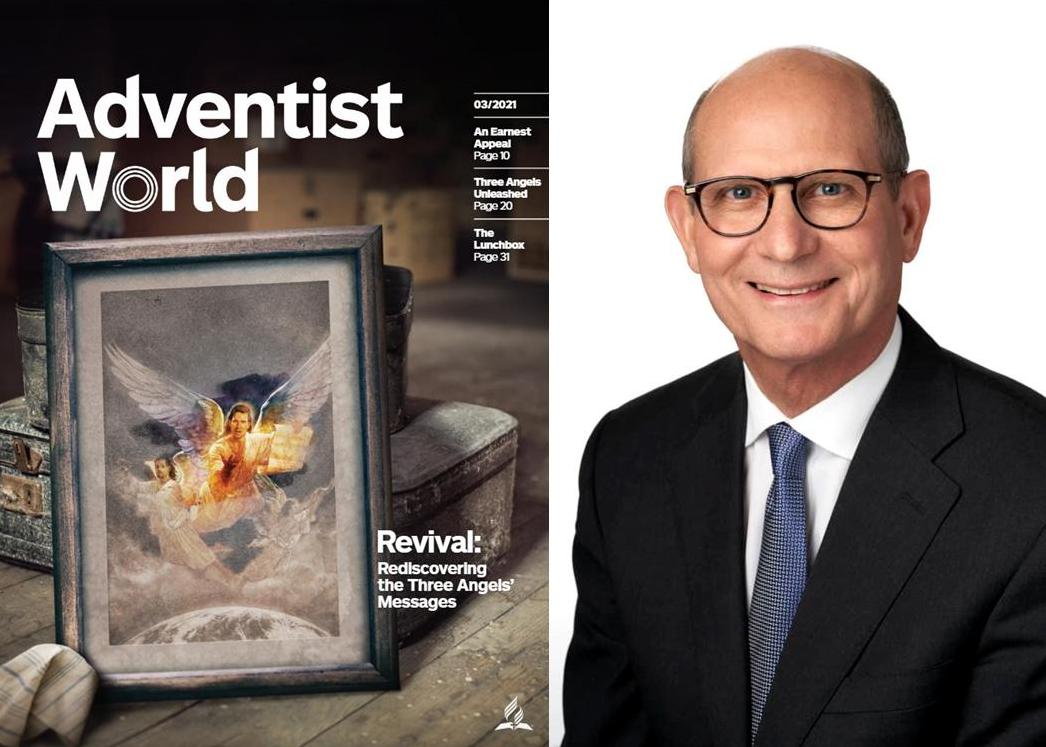 The March 2021 edition of Adventist World p. 21, published by the General Conference of Seventh-day Adventists, has just announced a new Three Angels’ Message “project” for “church members.” This announcement was made during an interview with President Ted Wilson. Ted Wilson explained the new project and shared his views about the mark of the beast. Ted Wilson said:

“All of this is closely tied into the three angels’ messages, helping people know that God is the Creator, that we need to turn away from false religious practices that constitute Babylon in mixing truth with error, and that we are to avoid the mark of the beast – false worship on a day other than the seventh-day Sabbath.” [1]

No. This is not true. A day “other than the seventh-day Sabbath” can be Monday or Tuesday. The hierarchy of the Seventh-day Adventist Church has given up on its work of correcting erroneous perceptions about our message. The mark of the beast is not false worship on “a day other than” God’s true Sabbath; the mark of the beast is false worship on Sunday when it is imposed by law:

“But when Sunday observance shall be enforced by law, and the world shall be enlightened concerning the obligation of the true Sabbath, then whoever shall transgress the command of God, to obey a precept which has no higher authority than that of Rome, will thereby honor popery above God. He is paying homage to Rome, and to the power which enforces the institution ordained by Rome. He is worshiping the beast and his image. As men then reject the institution which God has declared to be the sign of his authority, and honor in its stead that which Rome has chosen as the token of her supremacy, they will thereby accept the sign of allegiance to Rome—“the mark of the beast.” And it is not until the issue is thus plainly set before the people, and they are brought to choose between the commandments of God and the commandments of men, that those who continue in transgression will receive “the mark of the beast.” (Great Controversy, p. 449).

This is no coincidence. This is part of the contemporary church attempting to remake the movement founded by our pioneers. We are witnessing a scenario in which everything remotely resembling historic Adventism is being eliminated, turned upside down or corrupted. There is a crisis of faith in Adventism, and this is leading us straight into Rome’s universal and ecumenical fraternity.

“God gave to His servants a testimony that presented the truth as it is in Jesus, which is the third angel’s message, in clear, distinct lines” (Evangelism, p. 191).

The third angel’s message is the mark of the beast message. God gave it to us in “clear, distinct lines” and thanks to 60 years of ecumenism, we have turned it into strange, fuzzy gibberish. Let us never forget that, as Seventh-day Adventists, we have a great responsibility to convey God’s message in the way He intended it to be, and not with our modifications. Notice God’s command:

Saying that the mark of the beast is “any day” rather than Sunday is a significant change in our approach to the third angel’s message. God does not describe it that way. Are we now going to try to change the word of God like Rome did (Daniel 7:25)? We’ve already done this to the Great Controversy by producing a watered-down version called the Great Hope that eliminates the issues about the mark of the beast.

The beauty of the Adventist message is being replaced by a newer version of the faith that is suited to avoid controversy. If the true Adventist message is demanding too much of you, if the cross of Christ is too heavy, if denying your will is too much, if crucifying the flesh and rendering unquestioning obedience to God’s word is not your thing – you now have a choice. There is a version of Adventism in which all the unpopular truths of the faith are being removed. It’s an Adventism that’s ecumenical, not biblical.

By changing the message to make it more acceptable and less offensive, we are actually denying people the final invitation of mercy that God wants the world to hear. The Three Angels’ Message is not a seeker-sensitive or culturally friendly gospel, and any attempt to do so would corrupt the faith that God gave us. Our only safe course is to stay with the foundation that was laid long ago. This provides a much sounder basis for the future than anything else anyone can offer. The right template for the future can only be found in the Seventh-day Adventist movement’s own history.