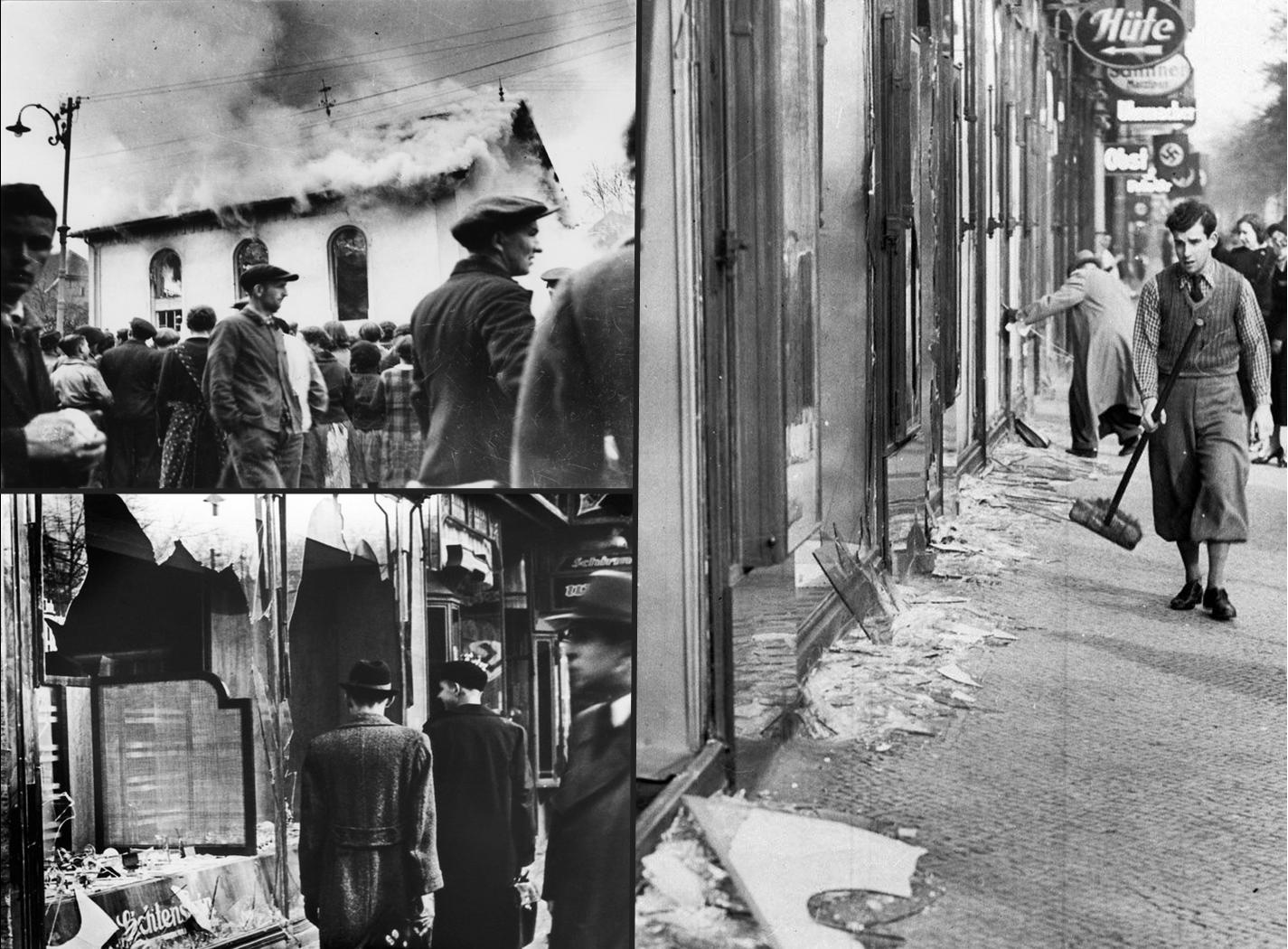 History does have a tendency to repeat itself. Kristallnacht is a German word that means “Night of Crystal” or “Night of Broken Glass” and is a reference to November 9-10, 1938, when Jewish synagogues, stores, homes and businesses were attacked and burned to the ground by rioters throughout Nazi Germany. Mobs of angry German citizens smashed windows, looted and attacked the Jews by pulling and beating them out of their homes while locked down in fear. During the entire Kristallnacht episode, German police were ordered not to intervene. They were told to do nothing while the murder and mayhem continue. [1] 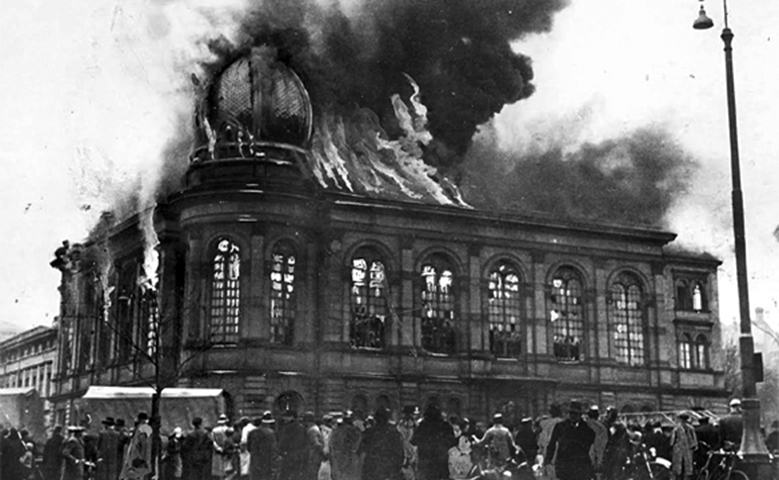 The Boemestrasse Synagogue in Frankfurt, Germany, burns on November 10, 1938. Over 1,000 Jewish synagogues were burned or were destroyed during staged civilian attacks on the Jews.

Lockdowns, riots, violence, looting, murder and police inaction? Does this sound too familiar? What we are seeing today on the streets of America is not just a coincidence. The so-called Antifa and Black Lives Matter organizations that claim to be fighting fascism and Nazism are in fact acting like the Nazis of Hitler’s Germany. Just like the current political unrest that we are witnessing in the United States started by the tragic death of George Floyd, the Kristallnacht of Germany was also started due to the murder of ONE man. 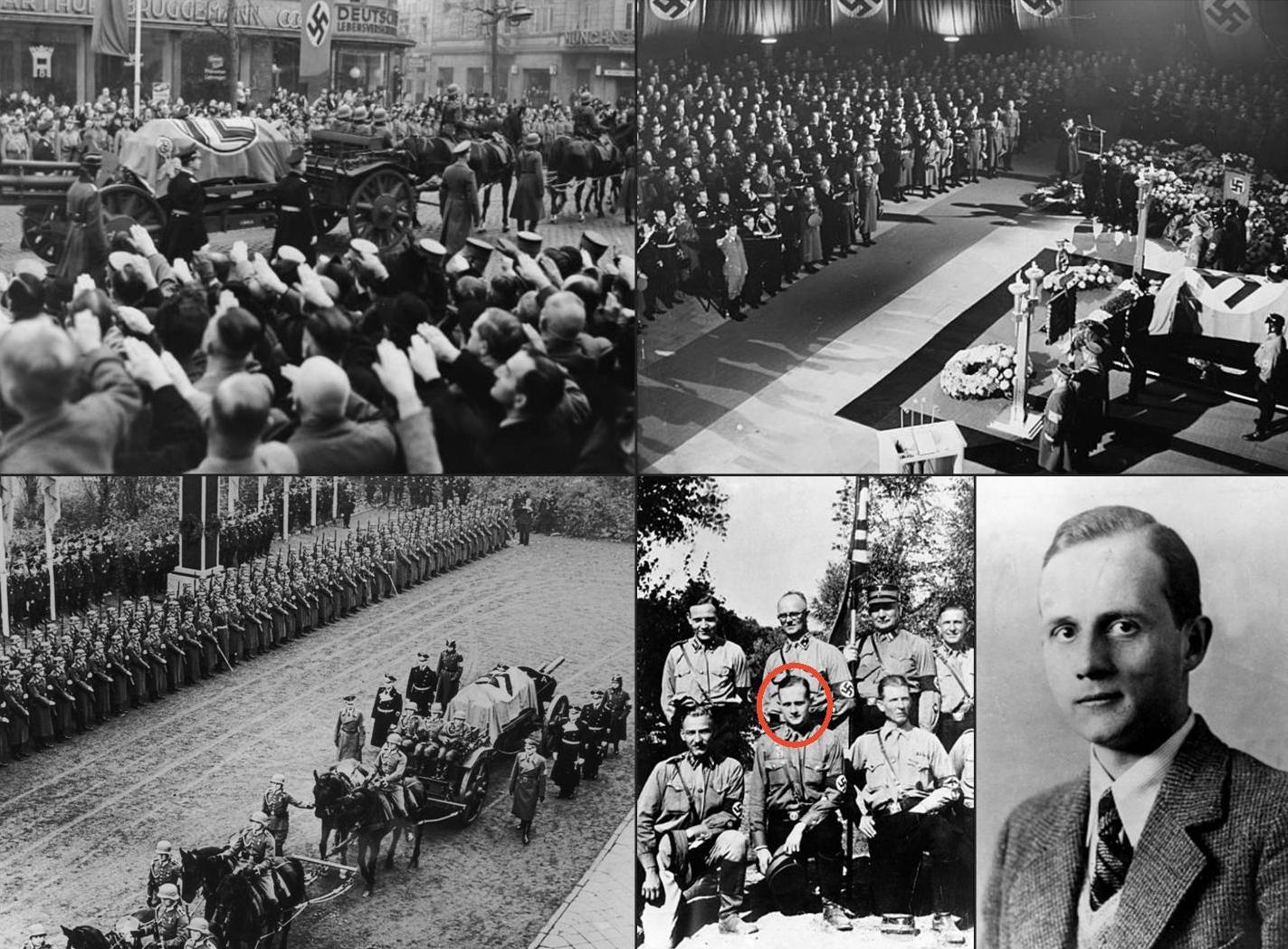 This entire episode of attacks upon the Jews began after the death of ONE man, the Nazi Ernst vom Rath. He was given a lavish, Nazi state funeral.

Germany’s Kristallnacht of 1938 began with the murder of a Nazi diplomat by a Jewish teenager. It was advertised and politicized as a racially-motivated killing inspired by hate against the German race by the Jews. Ernst vom Rath, a member of the Nazi party, was killed by Herschel Grynszpan, a Polish-Jewish student. [2] This was the pretext for the 1938 riots in Germany. The Nazis used this murder as the perfect excuse to escalate their campaign of hate against the so-called “racist, hate-filled” Jews. After the death of Ernst vom Rath, the Nazis gave him a lavish state funeral and publicized his murder worldwide in order to turn public opinion against the Jews. Sounds familiar? 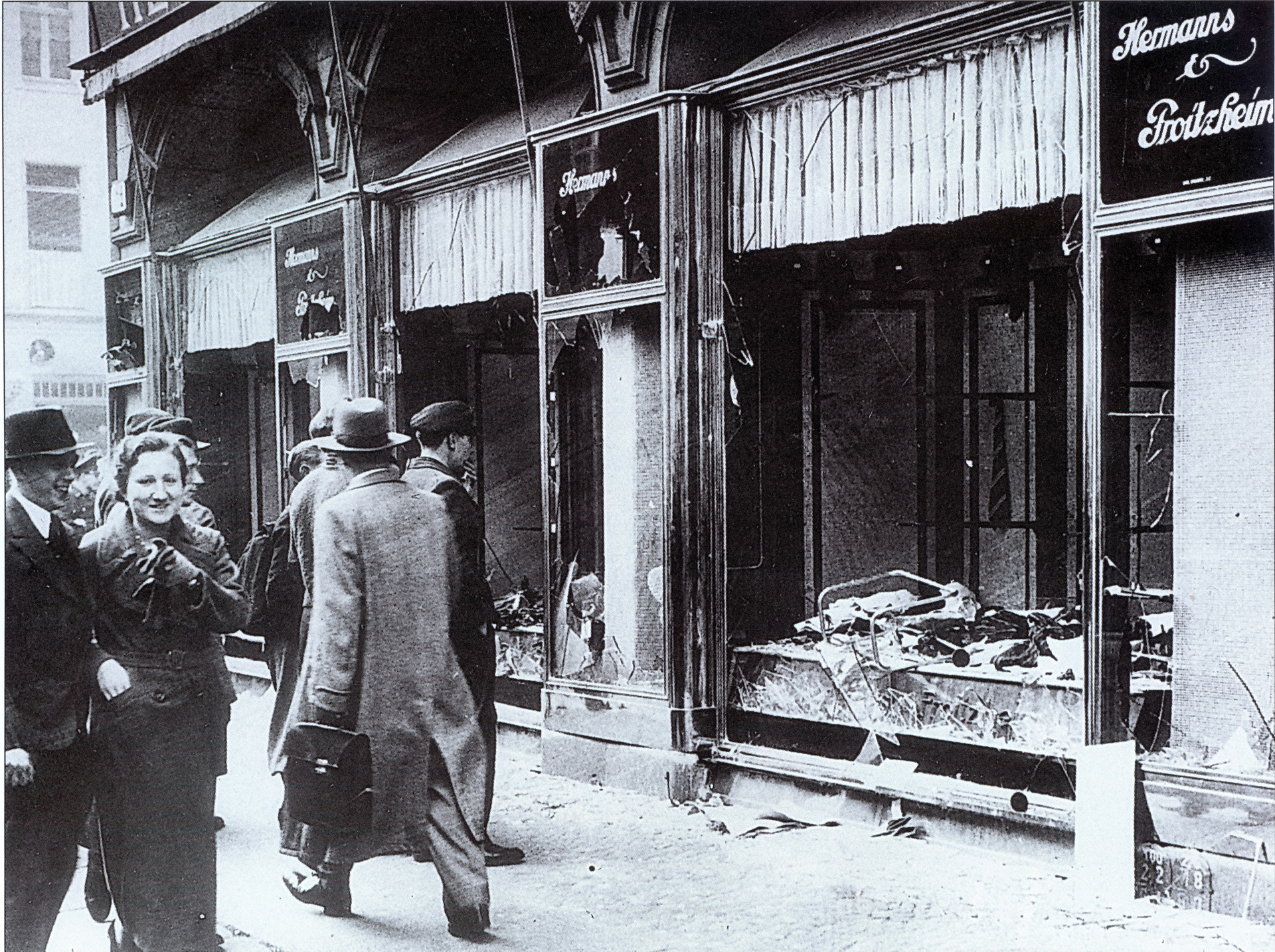 Germans smile as they walk past the broken windows of Jewish-owned shops in Berlin. Over the course of two days, 7,500 businesses were destroyed.

After the funeral, well-organized violent retaliations against all Jews in Germany were made to appear as “spontaneous demonstrations.” [2] The Nazi Party sent messages to the local police informing them not to interfere with the coming destruction or purging. Instead, police were told to arrest the victims of the riots – the Jews. Even fire departments were told not to put out fires. [2] This all sounds too familiar when we consider what is happening today. Governors, mayors and police and fire departments are doing little to nothing to stop the fires and riots that are taking place on our streets across America. 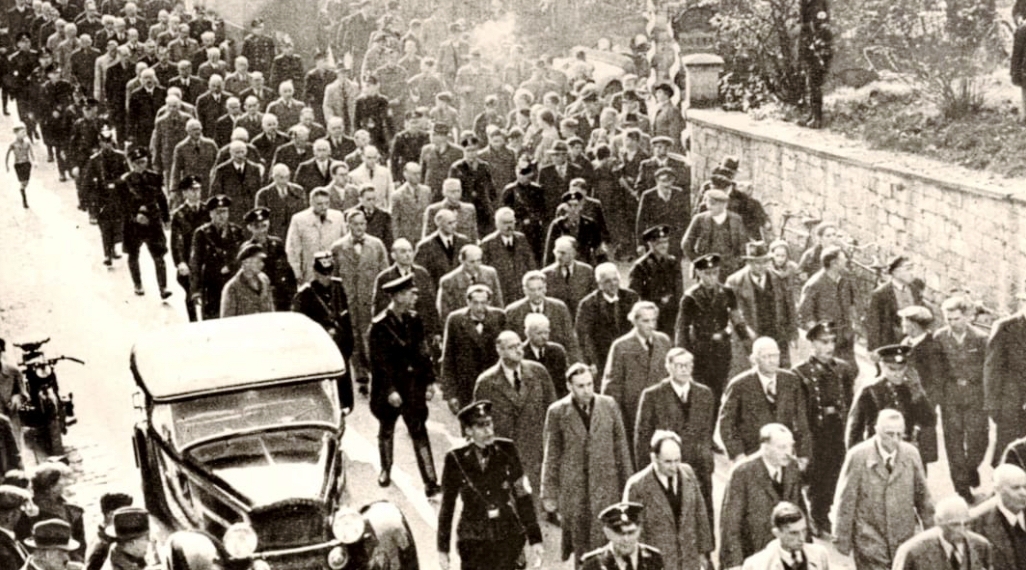 Jewish men are rounded up in Baden-Baden, Germany, for deportation to the Dachau concentration camp in the aftermath of Kristallnacht.

In two days and nights in 1938, German citizens burned down and damaged more than 1,000 synagogues. More than 7,500 Jewish businesses were looted and destroyed and private homes were also ransacked or demolished. Jews were killed and beaten without mercy. Many were pulled out of their homes and terrorized while 30,000 men aged 16 to 60 were arrested and taken to concentration camps. Germany’s Kristallnacht was the start Nazi’s final solution for the Jews problem. 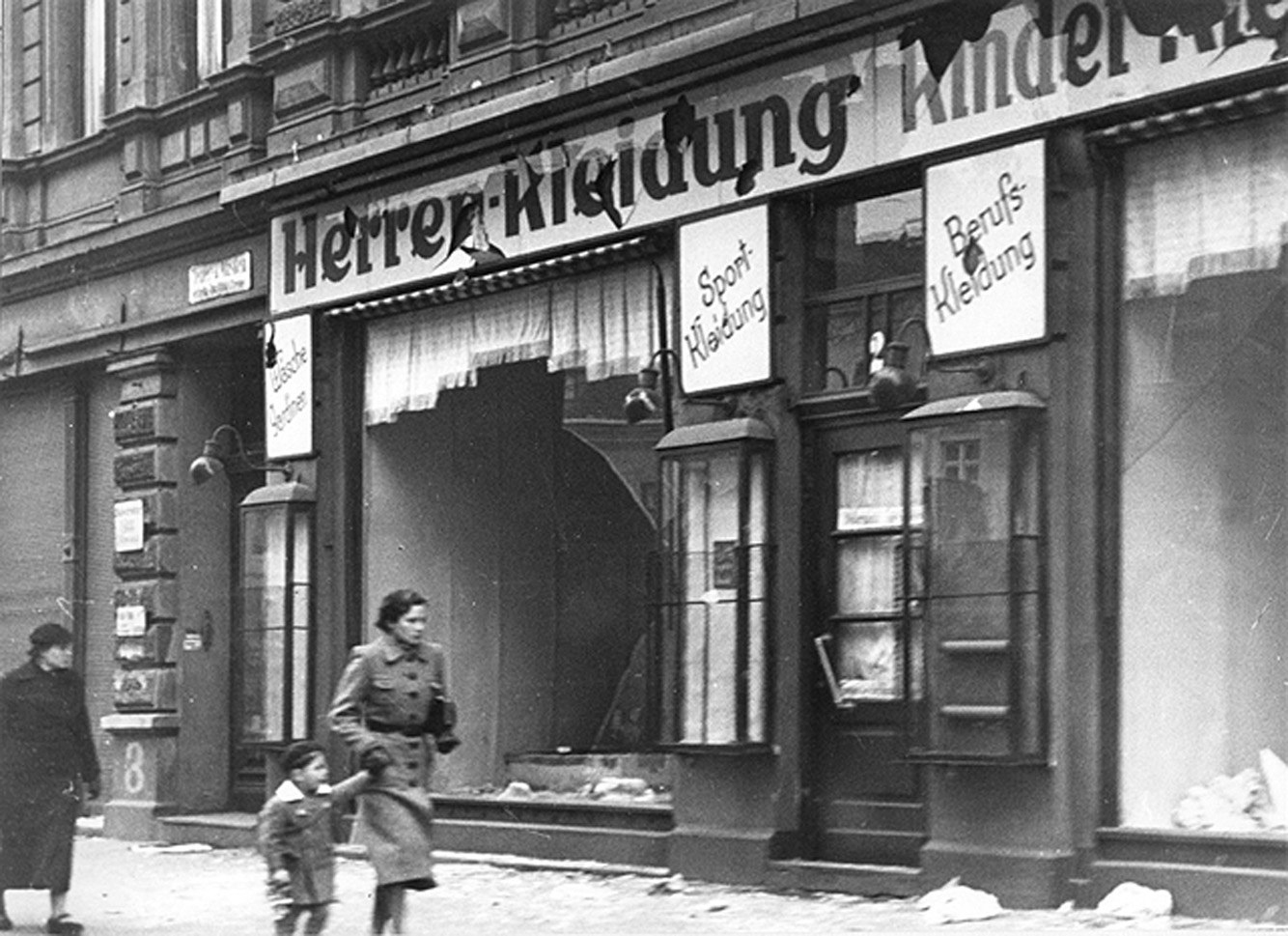 German women pass by the broken windows and looted stores of the Jews.

Kristallnacht culminated in new anti-Jewish policies designed to let the world know that Jews were about to suffer one of the greatest genocides of history. What followed Kristallnacht was the expulsion of the Jews from public life. Jewish children were expelled from public schools and all remaining Jewish organization and institutions were dissolved. All of this came, apparently, because of the death of ONE man. 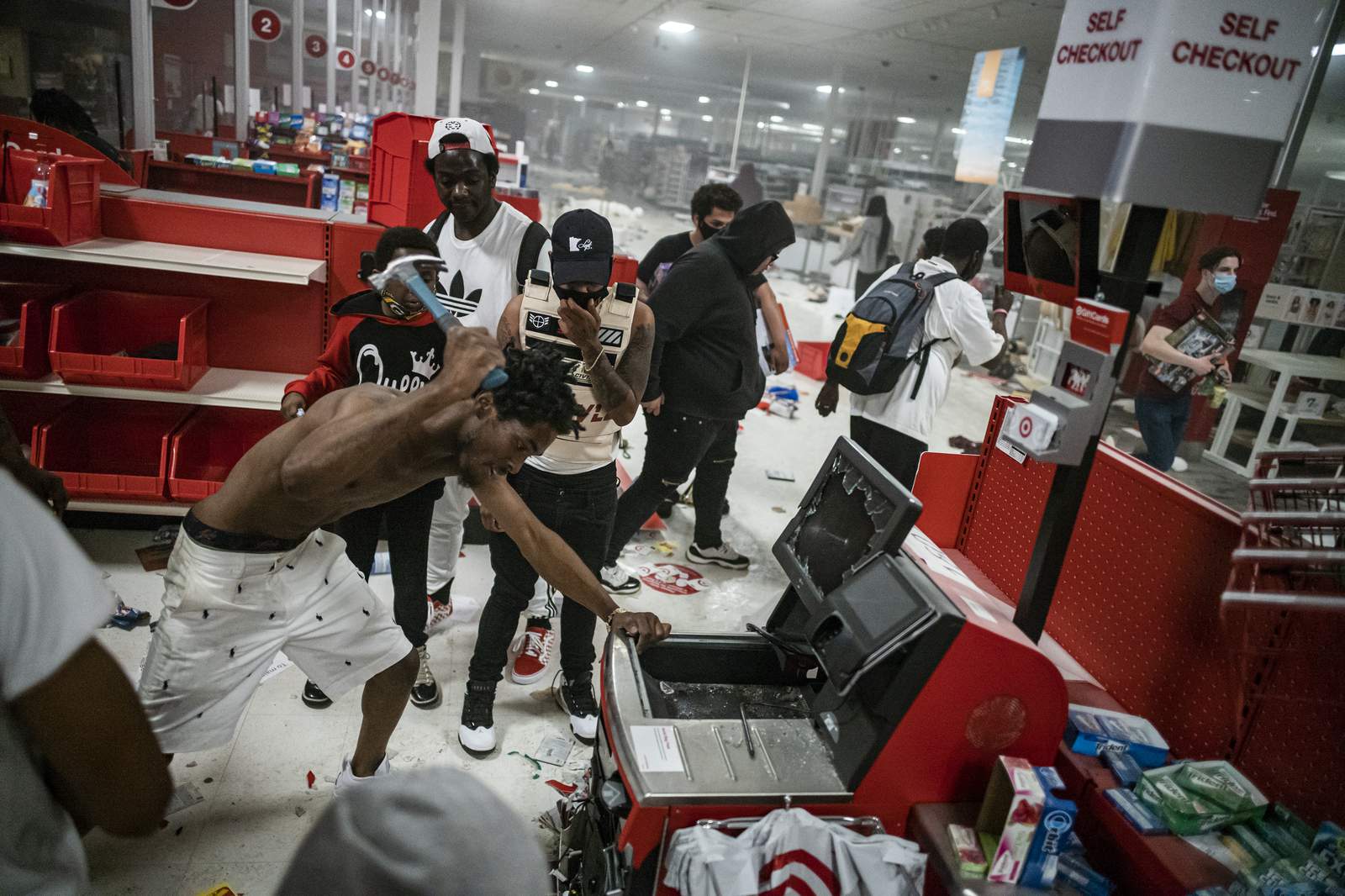 Welcome to Kristallnacht 2.0. The domestic terrorist techniques used by the Nazis in 1938 have come to America. It’s hard to imagine why so many American citizens are OK with Marxists taking over their cities, destroying historical monuments, randomly beating innocent people, terrorizing citizens, destroying businesses and re-implementing crushing Covid-19 lock-downs. The only people targeted by local police are those who speak out against this anarchy and lawlessness. If you dare say anything, you will be accused of being a hateful racist and you will be harassed, humiliated, assaulted or worse.

With all the chaos spreading across the country, it is imperative that our leaders enforce the laws of our nation. They know who the perpetrators are that are calling for the burning of buildings, the toppling of statues and the destruction of religious symbols. This is domestic terrorism and it is the most pressing danger currently facing our country.

“Hawk Newsome, president of the Greater New York Black Lives Matter, reiterated that if the movement doesn’t get what it wants, it will “burn down this system.” [3]

Threatening to burn down our system is domestic terrorism. Why are there no consequences for those who make these threats? Why are they allowed to freely sow seeds of anarchy? These are not protesters or civil rights activists. These are home-grown, radicalized terrorists. They are making void both divine law and human law. It is time for those in civil leadership to wake up and defend law and order. Government leaders have a God-given responsibility that they are not fulfilling.

“For rulers are not a terror to good works, but to the evil. Wilt thou then not be afraid of the power? Do that which is good, and thou shalt have praise of the same: For he is the minister of God to thee for good. But if thou do that which is evil, be afraid; for he beareth not the sword in vain: for he is the minister of God, a revenger to execute wrath upon him that doeth evil.” Romans 13:3, 4.

Instead of punishing evil, our civil leaders are protecting the anarchists and punishing the innocent who watch with horror America’s subversion. The reason government leaders are failing to fulfill their obligations in enforcing our laws is because their moral compass is broken. How did we ever get to this place? God’s word reveals the answer:

“They have rebelled against the Author of all just and righteous law. The setting aside of the divine precepts gave rise to thousands of springs of evil, discord, hatred, iniquity, until the earth became one vast field of strife, one sink of corruption” (Great Controversy, p. 655).

“Wherever the divine precepts are rejected, sin ceases to appear sinful, or righteousness desirable. Those who refuse to submit to the government of God are wholly unfitted to govern themselves. Through their pernicious teachings, the spirit of insubordination is implanted in the hearts of children and youth, who are naturally impatient of control; and a lawless, licentious state of society results” (Great Controversy, p. 584).