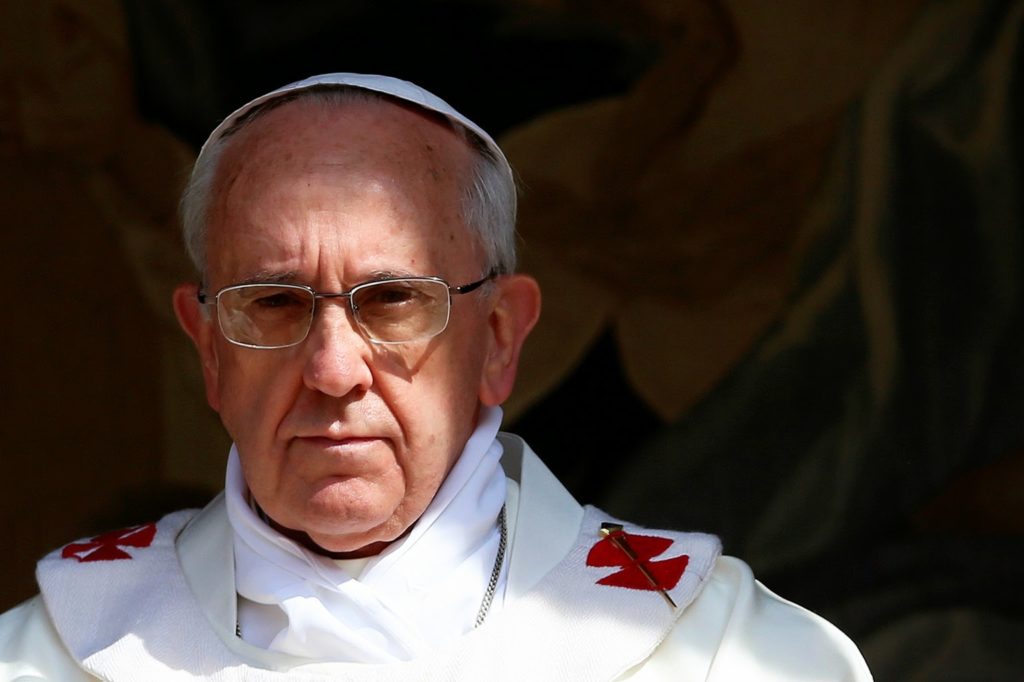 “And he shall speak great words against the most High.” Daniel 7:25.

One of the identification marks of the apostate power of the “little horn” is that it will speak blasphemy against the most High God. This act of speaking “great words against” God is more than just attributing the divine titles of “holiness” and “infallibility” to himself. The sins of the little horn is more than just exalting human tradition above divine law. This sinister power described in prophecy will also insult the holy God of Scripture – Father, Son and Holy Spirit.

Pope Francis is demonstrating utter disdain for the Biblical God found in scripture – the God he claims to represent here on earth. Even though he clothes himself with a mantle of holiness, it seems that he cannot hide his contempt for true Biblical Christianity.

Saying the Godhead is in Disunity

Pope Francis was speaking with a group of Catholic theologians regarding the complexity of unity and how to achieve union with so many disparities and disagreements. The Pope said that we must do what the Trinity does – argue behind closed doors but publicly give the appearance of unity:

“In the meeting, the pope jokingly likened this to the way the Holy Trinity functions. ‘Inside the Holy Trinity they’re all arguing behind closed doors…but on the outside they give the picture of unity.’ ”

Joking about the Crucifixion

Pope Francis related the story of how he was able to get a young Jewish student with disciplinary problems to behave. He grabbed the boy by the ear and showed him a crucifix of Christ nailed to a cross and warned him by pointing to Jesus and saying, “That was a Jew like you, if you misbehave, you will end up the same.”

Jesus did not end up on the cross for misbehaving. The cross was the most important act in the history of the cosmos. An atonement took place on a cross when Christ died so that men and women could be reconciled back into the favor of God. You cannot trivialize the death of Christ as an anecdote for misfit kids. You can offer the atoning blood of Christ to disobedient children that they may seek repentance and forgiveness, but to threaten them with the same death of Christ is to downplay and diminish to significance of the cross.

Jesus “probably” had to begged for forgiveness?

Speaking about Jesus as a child, Pope Francis said that he believes Jesus begged forgiveness of His parents:

“Instead of returning home with his family, he stayed in Jerusalem, in the Temple, causing great distress to Mary and Joseph who were unable to find him. For this little escapade, Jesus probably had to beg forgiveness of his parents. The Gospel doesn’t say this, but I believe that we can presume it.”

God Lied to the Virgin Mary?

Pope Francis also believes that the Virgin Mary felt that God was a liar for not fulfilling His promise to her. The Pope claims the Virgin said the following about God in her heart:

None Dare Call This Blasphemy

Before you dismiss the above sources as “not a big deal” please consider the Infinite, the Holiness and the Majesty of Almighty God. The Bible forbids anyone to speak of God is a careless, irreverent manner:

“Thou shalt not take the name of the LORD thy God in vain; for the LORD will not hold him guiltless that taketh his name in vain.” Exodus 20:7.

It’s blasphemous and insulting to state that the Father, Son and Holy Spirit are only pretending to be united when they actually aren’t. Pretending is lying! God is not a liar.

As stated in the Second Commandment, God will hold people accountable for taking His name in vain. Again, His wrath will be revealed against sinful, presumptuous men who speak words that impugn the holy character of God:

“My wrath is kindled against thee, and against thy two friends: for ye have not spoken of me the thing that is right.” Job 42:7.

How can the whole world follow after a man who is humiliating himself with such ridiculous statements? You cannot crack jokes about the crucifixion of our blessed Lord and Savior and joke about the holy Godhead and then expect to be taken serious. The reality is that Pope Francis is not just making jokes about God, he is actually spreading heresies that attacks God’s perfect character, His perfect harmony, His perfect will and His perfect goodness.