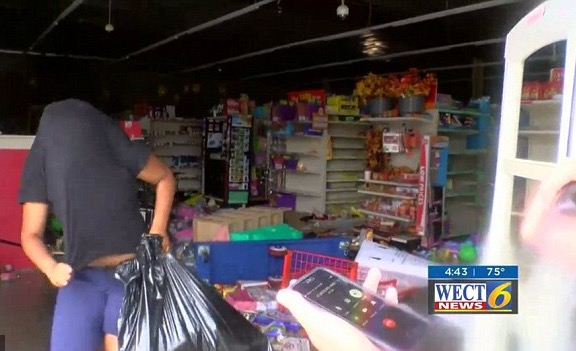 A looter covers his face during the aftermath of Hurricane Florence.

“Thefts, covetousness, wickedness, deceit, lasciviousness, an evil eye, blasphemy, pride, foolishness: All these evil things come from within, and defile the man.” Mark 7:22, 23.

Disasters never fail to bring out the very best and the very worst in people. While many go out of their way to help others in times of crisis, there will always be those who will manifest the worst side of human nature.

The torrential rains brought by Hurricane Florence have caused severe flooding to parts of North Carolina. The death-toll from this storm has jumped up to 31, but it is expected to climb higher. [1] The city of Wilmington, NC was cut off from the rest of the world as roads leading to the city were closed due to the flooding.

It is almost expected to see people looting in the streets after a disaster. North Carolina was no exception as we observe the breakdown of social norms in the aftermath of Hurricane Florence.
Looters have taken to the streets and are vandalizing and breaking into stores stealing items that have nothing to do with food or water. Thieves are taking advantage of this disaster and are looking at how they can get free stuff. [2]

It’s bad enough that people have to endure a dangerous, life-threatening natural disaster; but what a shame to have to watch out for the human disaster as gangs of dangerous thieves go out looking for someone to rob or something to steal in times of hardships. Instead of thanking God that their lives have been spared, some people adopt the “every man for himself” attitude and go around looking to steal stuff that they don’t even need. They have no care, no concern and no gratitude. It truly is disheartening.

God bless those who are out knocking on doors, checking on neighbors and helping out in the clean up efforts. This is not just a Christian obligation but also an American civil duty. It is encouraging to know that God is still in control and working in the lives of unselfish heroes who are out risking their lives to save others.

We are just one disaster away from the total collapse of civilization. If this lawlessness can happen in North Carolina it can happen anywhere. I tremble for our country. It is God who is holding back the winds of strife (Revelation 7:1-3) so that the final gospel invitation can be given to all nations.

“As I hear of the terrible calamities that from week to week are taking place, I ask myself: What do these things mean? The most awful disasters are following one another in quick succession. How frequently we hear of earthquakes and tornadoes, of destruction by fire and flood, with great loss of life and property! Apparently these calamities are capricious outbreaks of seemingly disorganized, unregulated forces, but in them God’s purpose may be read. They are one of the means by which He seeks to arouse men and women to a sense of their danger. The coming of Christ is nearer than when we first believed. The great controversy is nearing its end. The judgments of God are in the land. They speak in solemn warning, saying: ‘Be ye also ready: for in such an hour as ye think not the Son of man cometh.’ Matthew 24:44.” (Testimonies, Vol. 8, p. 252).