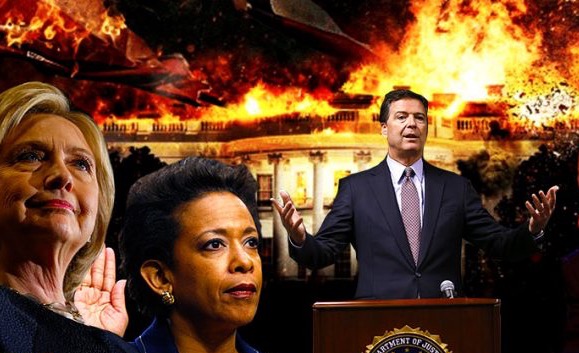 “Therefore the law is ignored and justice is never upheld. For the wicked surround the righteous; Therefore justice comes out perverted.” Habakuk 1:4

“Drunkenness and revelry, passion, envy, dishonesty of every sort, are represented among those who administer the laws” (The Great Controversy, p. 586).

Many people are deeply concerned about the growing levels of corruption in Washington D.C. Our nation is heading down the wrong path as we are rapidly losing our moral character of truth and justice.

The powerful tools of the US federal intelligence agencies, used to fight ISIS and other terrorists, are the same weapons that have been used against American citizens and political candidates. We are learning about the extensive abuse of power at the FBI and the DOJ as they conspired with the mainstream media and with certain political parties to destroy one presidential candidate and to protect another. As a result, a lot of innocent people became targets.

With every passing day there are more revelations coming out from the House Intelligence Oversight Committee, the committee in charge of overseeing the activities of the FBI and the DOJ. Of the thousands of pages that our intelligence communities have turned over to Congress, so far the documentation has revealed that top-ranking law enforcement officials at the FBI and DOJ have been involved in a massive scandal.

Members of these agencies have used their sacred positions of trust to illegally spy, investigate and work to bring down political enemies. They have been playing dirty politics by allowing their political bias to dictate their work instead of faithfully adhering to the rule of law. These abuses of power happen whenever people are free to operate year after year without any oversight or accountability.

In order to restore any kind of semblance of integrity and justice at the FBI and DOJ, major personnel changes must take place. A lot of people need to be fired. New rules must be implemented when obtaining warrants for spying. New checks and balances must be added and more oversight is needed. Term limits must be enforced. No more 10, 20 or 30 years in the same position of trust. And most importantly, there must be equal treatment under the law because intelligence officers, investigators and law enforcement officials are not above the law. This means that people need to be held accountable and some will have to go to jail.

Unless this happens, the problems will never go away. The culture of corruption will only intensify in Washington D.C. as it already has in Hollywood and in the music industry. We live in a time unlike any other in history. World events are moving rapidly in their fulfillment of prophecy. The lawless age of corruption is here:

“This know also, that in the last days perilous times shall come…But evil men and seducers shall wax worse and worse, deceiving, and being deceived.” 2 Timothy 3:13.

“And judgment is turned away backward, and justice standeth afar off: for truth is fallen in the street, and equity cannot enter.” Isaiah 59:14.