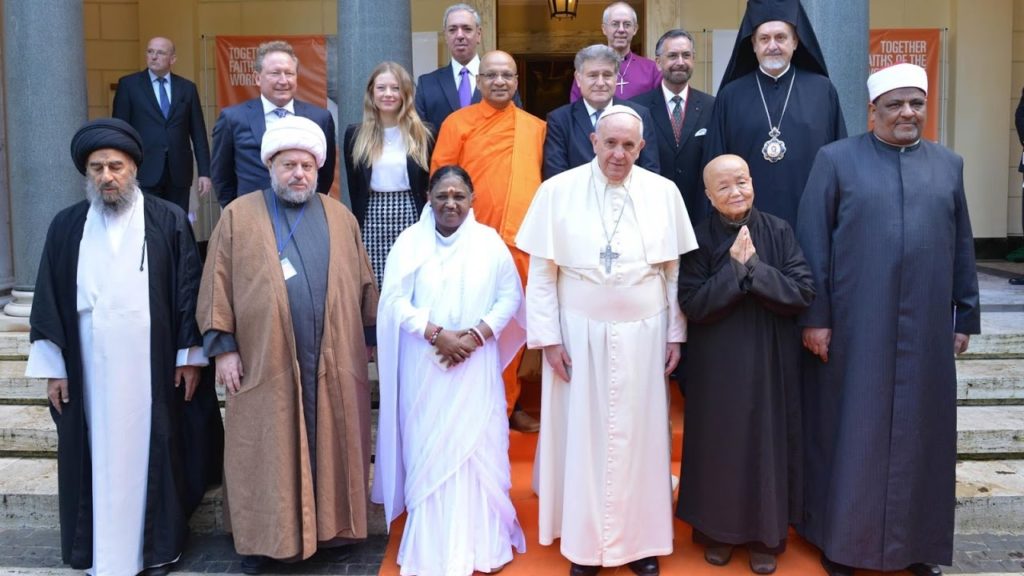 We live in a multicultural world with different beliefs systems and religious faiths. How do we relate to the various religions of the world? And more importantly, how should we interact with the 4,300 world religions and the more than 33,000 Christian denominations? With so many religious beliefs, churches, denominations, congregations, religious bodies, faith groups, tribes, cultures, and spiritual movements how do we treat all of the different philosophies and ideologies?

One of the greatest difficulties we face today is that our postmodern world compels us to embrace every faith as part of the same path that leads us to the same God. Each of the different religious faiths hold their beliefs to be true. And this multicultural age in which we live in would have you believe that there isn’t any one, true, objective, universal truth. Everything is relative, truth is just a perception and no one religious belief system can be the only one true faith.

This is what we are told by the modern ecumenical churches who are pushing for worldwide cooperation and unity among all the various faiths. Through ecumenism and interfaith cooperation the world religions, with all their conflicting worldviews, have all made claims and assumptions that they are all true faiths.

However, when we examine the Bible we are told that not all belief systems are equal. The Scriptures teach us that some religions are false. In fact Jesus himself warned against “false” prophets.

“Beware of false prophets, which come to you in sheep’s clothing, but inwardly they are ravening wolves.” Matthew 7:15.

“And many false prophets shall rise, and shall deceive many.” Matthew 24:11.

Jesus did not judge all faiths or faith leaders as equal and spoke quite strongly about false teachings and prophets. So just believing that a faith is true does not make it true. This requires that all these claims made by the different religious faiths need to be compared, assessed and judged to see how their claims stand up to reality.

Paul also warns of “false” apostles who would preach a false “gospel:”

“For such are false apostles, deceitful workers, transforming themselves into the apostles of Christ.” 2 Corinthians 11:13.

“But though we, or an angel from heaven, preach any other gospel unto you than that which we have preached unto you, let him be accursed.” Galatians 1:8.

Just because someone claims something doesn’t make it true. This fact is played out every day in our religious world. Take for example the great monotheistic faiths of Islam, Christianity and Judaism. They all claim to have the truth. All three faiths claim that their beliefs are true because their teachings came through divine revelation. But when you begin to compare them to each other what does reality show us?

Jews and Muslims believe that even though Jesus was a good person He did not rise from the dead. In their minds, Jesus’ death on the cross and resurrection from the grave was just an invention made up by His followers. On the other hand, Christians believe that Jesus died on the cross as an atonement for sin to redeem all mankind. Christians believe He rose from the dead and ascended into heaven and is now mediating between God and man.

So here we have two conflicting beliefs. Both of these statements cannot be true. One must be false. If what Christianity affirms is true then the teachings of Islam and Judaism on the life of Jesus are false, or vice versa.

Then you have Hinduism and Buddhism and all the eastern religions that say Jesus was a good person but His death played no significant role in relation to redemption. These eastern pagan religions pray and burn incense to various different idols representing different deities. On the other side you have the New Testament Christian teaching which says that idols and their deities are false teachings and counterfeit gospels. In 1 Corinthians 10:19-21 the Apostle Paul reminds the non-Christian pagans that their feasts and celebrations to their idols are actually being done to honor “devils.” Again, either the claims of Christianity are true or the claims made by the eastern religions are true. They both can’t be right because you have a conflict of beliefs.

Then you have different views even within Christianity. Many believe that evil, sin and the devil do not exist while others do. Some believe the Bible is the inerrant, authoritative word of God that can be trusted, while others believe it is full of errors. Some Christians downplay and water down the gospel to fit the modern cultural context while others affirm the Gospel and stand true to its teachings. Both positions cannot be true at the same time and in the same sense. One side has to be true while the other false.

What do we do with all the different claims in Christianity about truth? Is the Sabbath day on Sunday or Saturday? When we die, do we go to heaven, hell or the grave? What about God’s moral law; are the 10 Commandments part of God’s plan for our lives? These and other questions have resulted in an escalation of various different views of truth within Christianity. Do we ignore all these conflicting theological positions? Should we close our eyes and say that in a pluralistic society we must affirm all beliefs and teachings as valid? No. Jesus didn’t take that position nor did any of the other authors of scripture.

The declarations of truth made by the churches must be evaluated and tested because not all faiths are true simply because people believe them to be true.

How Should Adventists Respond?

Yes, there are many different views of faith that exist in our pluralist society and all are entitled to their space. All are entitled to express their views, even if they are contrary to ours. But Adventists must also espouse their views of truth in the public forum and in all these ecumenical, interfaith encounters (Read Testimonies, Vol. 9 p. 19). It is a moral failure on our part to keep silent when we should be engaging people with truth, by sharing the basis or evidence which led us to affirm these truths.

To keep silent or to leave people in the dark would be contrary to fostering a healthy debate or to critically examine our own views and those of others. But sadly too often we are silent on these very issues whenever we get together with all the churches in interfaith cooperation. Failure to share the 3 Angels’ Message will result in the loss of souls, including our own (Ezekiel 3:17, 18).

“The interests of the cause of present truth demand that those who profess to stand on the Lord’s side shall bring into exercise all their powers to vindicate the advent message, the most important message that will ever come to the world” (Manuscript 125, 1907).

Remaining silent and inactive regarding the special testing truths for this time when we have an opportunity to make a difference is not just cowardly, but sinful. Apathy, sitting on the fence and a refusal to engage are not options for the Biblical Christian. Yes we must treat all people with respect and dignity, but having a true love for all people will compel us to proclaim the truth to them as well.

“But speaking the truth in love, may grow up into him in all things, which is the head, even Christ.” Ephesians 4:18.