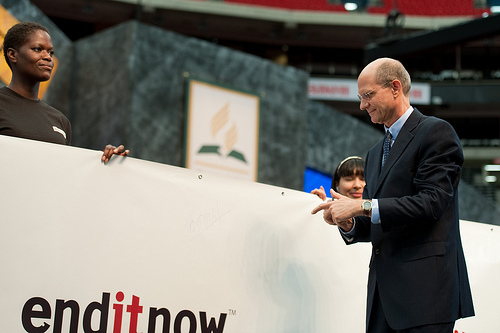 The church is taking a stand to “affirm the dignity and worth of each human being and decry all forms of physical, sexual and emotional abuse.” [2] Every 25th of August a call is made to every Seventh-day Adventist around the world and to other community groups to unite together and end violence.

Sounds very noble, but why stop there? We wonder why the church doesn’t just add “babies” and the “unborn” to the list of those whose’ dignity and worth they want to protect? It’s good to protect men, women and children, but why not babies, both born and unborn? Why the silence? Or has the issue of protecting babies become too political? 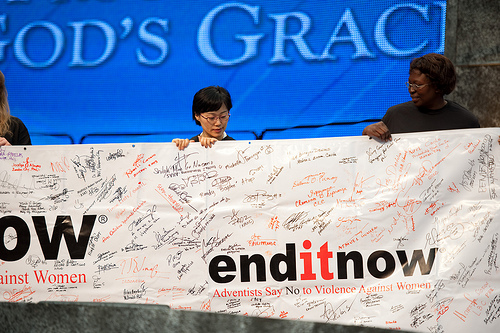 Over 1 million signatures were being collected to deliver to the United Nations.

If ‘End it Now’ is going to be a genuine, sincere campaign and not just a publicity stunt, we must affirm the dignity of EVERY human being including babies, both born and unborn. We must raise our voice and speak out for the little ones who don’t even have a voice to defend themselves.

Why don’t Seventh-day Adventists designate a day in our yearly calendar cycle to defend the smallest, the most defenseless, the most innocent and the most vulnerable? Approximately 60 million babies have met a gruesome, untimely, violent death since 1973. And this number is going up every year. Many of those babies were aborted in Seventh-day Adventist hospitals. [3]

According to the Bible, the unborn fetus is called both a baby and a child and is worthy of being protected:

I propose that Seventh-day Adventists make a motion during the 2020 General Conference Session in Indianapolis, IN, to end abortion procedures in all of our denominational hospitals. I also propose that the 2020 delegates change the name of the “End it Now” campaign to the following:

“End it Now—Violence Against Men, Women, Children, Infants and the Unborn”

By ending abortion in Adventist institutions and by making this name change to the “End it Now” campaign, we can truly and honestly raise awareness to end violence to EVERY human being; not just to some. We will be able to uphold the dignity of ALL life; not just to a few. And most importantly, in the day of judgment, we won’t be accused of being phony hypocrites and frauds. That’s a good thing.

God help us to not turn a blind eye to the barbaric atrocities being committed by the abortion industry. Let us work to stop this violence, first in our own Seventh-day Adventist institutions and then across the world.