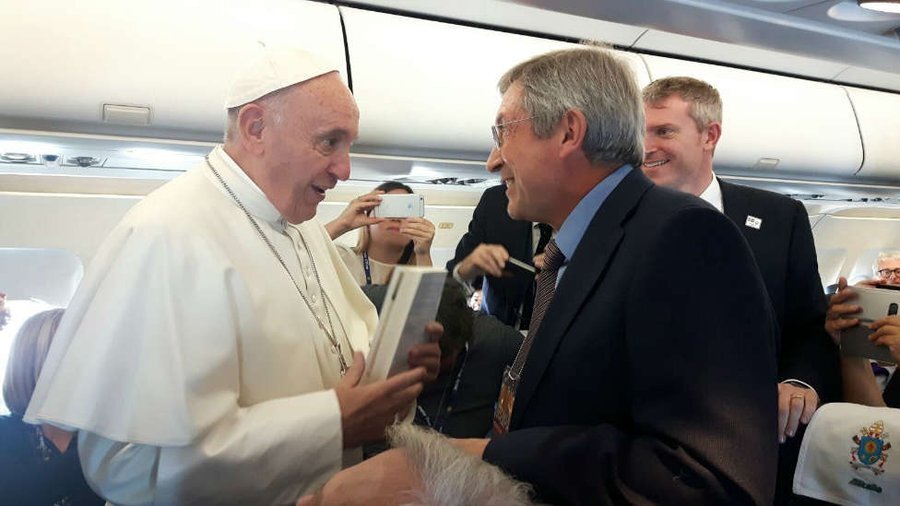 Pope Francis with Juan Vicente Boo aboard the papal airplane.

Juan Vicente Boo is a veteran news correspondent who has been following the Popes of Rome for 22 years. As a Vatican insider stationed in Vatican City, he has met with Pope John Paul II, Pope Benedict XVI and Pope Francis. Juan Vicente Boo travels with the Pope and reports on all his activities. On February 21, 2021, during an interview on COPE radio in Spain, Juan Vicente Boo affirmed that “Francis, through his dialogue with all religions, has become the Pope of all religions.” [1]

Juan Vicente Boo is absolutely correct because he is only echoing what everyone in the Vatican already knows. Ecumenism and interfaith dialogue are healing the deadly wound (Revelation 13:3) and making Francis the Pope of all religions. Why can’t Protestants understand this? Why don’t Seventh-day Adventist leaders open their eyes? Rome’s interfaith movement has unleashed a series of disastrous errors that are distorting the divinely revealed truths of God by replacing biblical revelation with human relativism.

This has led to the false affirmation that all religions are one, and that God wants there to be religious diversity, just as He has willed gender and sexual diversity. Diversity is another name for perversity, and this teaches that the followers of every religion are children of the same God. That is why under Pope Francis’ universal fraternity (Fratelli Tutti), every pagan god, every false religion and every idol known to man is embraced without hesitation.

“What say I then? that the idol is any thing, or that which is offered in sacrifice to idols is any thing? But I say, that the things which the Gentiles sacrifice, they sacrifice to devils, and not to God: and I would not that ye should have fellowship with devils.” 1 Corinthians 10:19, 20.

Thus, Francis has become the Pope of all religions. If Francis is the Pope of all religions, then he is the Antichrist because the true ministers of Jesus represent Christ; not Mother Earth, Buddha, Allah, Ganesha, Shiva, Vishnu or idols (demons). Pope Francis is uniting the Christian and Protestant world with false idols (demons), relegating the true God of heaven to the same level as false gods. This apostasy, which is leading the world to violate the First & Fourth Commandments, is being spearheaded by the Vicar of Diversity, not the Vicar of Christ.

Where is the condemnation by the Protestant world? Where are the protests by the commandment-keeping people? Whenever dangerous heresies threaten to lead people astray, God’s faithful servants have always promptly intervened by giving a warning. Any failure on our part to speak up will only allow these errors to increase more and more.

The First Century Christians and martyrs never met in prayer with the idols of their time: Jupiter, Mars, Diana and others. They believed that any collaboration with these false gods was betraying the gospel of Christ. They were right. It is this generation that has abandoned the faith. The early church in its infancy and purity did not compromise the truth, they were too busy converting men and women to Christ. Here is the command given to us by Christ:

“And he said unto them, Go ye into all the world, and preach the gospel to every creature. He that believeth and is baptized shall be saved; but he that believeth not shall be damned.” Mark 16:15, 16.

This is not an ecumenical call to unite with pagan idols. This is the true work that the followers of Christ will do. At this time, the call is to expand the preaching of the everlasting gospel. This work must be done before the return of Jesus. As Pope Francis leads “Christians” and “Protestants” to betray the gospel commission, may our Heavenly Father place in our hearts a new sense of urgency to lead us to a greater willingness to share God’s last message of mercy in all its fullness with the world.