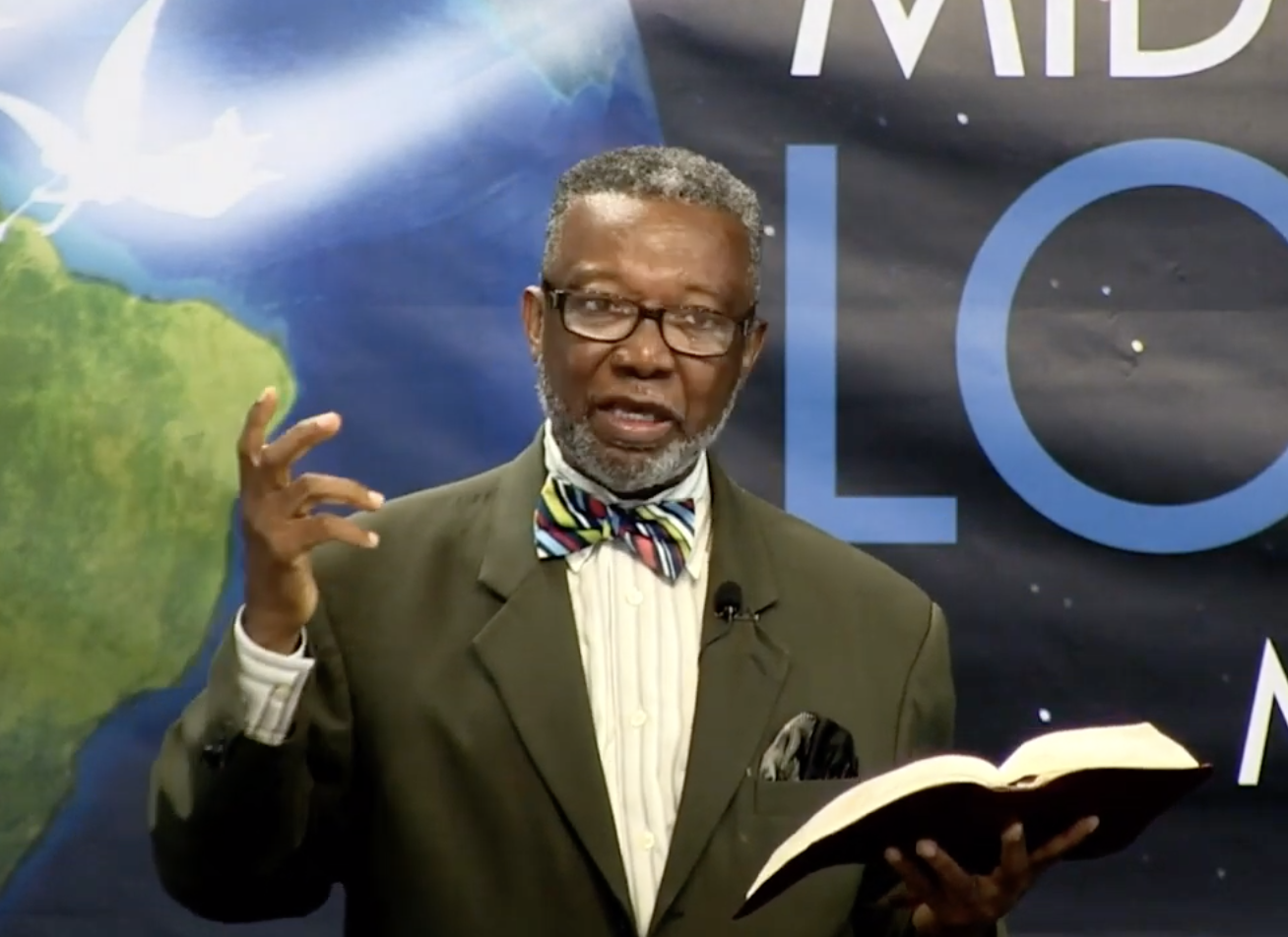 The following is a testimony of the transforming power of the everlasting gospel. We are fortunate to be able to share the following interview with Pastor Aubrey Duncan, a former 12-year crack addict who became an author, evangelist, pastor, founder/director of Advent Truth Ministries and a promoter of the true Third Angel’s Message. As a preacher, Pastor Duncan doesn’t beat around the bush when it comes to Revelation 13, 17 and 18 as you will read in the interview. We pray that it will be a blessing to all of you.

Andy Roman: Brother Aubrey Duncan, tell us a little about yourself and your ministry. What has God allowed you to do for His service?

Pastor Aubrey Duncan: I am the Lay Pastor at Forsyth New Life Mission of Seventh-day Adventists in Forsyth, GA (not to be confused with New Life Mission in Okeene, OK). My personal experience of divine deliverance from a twelve year plus addiction to crack cocaine gives me a unique perspective in sharing the grace of God and His power to transform the life. I am passionate about sharing the Gospel of Jesus Christ and helping others come into a saving relationship with Him.

In my book, God’s Sabbath Truth … a decision to make, I share that experience and show how the grace of God not only transforms but empowers the believer to keep all of His commandments, including His 7th day Sabbath commandment. I am also the author of the books, America, the Papacy and the Signs of the Times and Who is this Jesus who died for you?

I am the Founder/Director of Advent Truth Ministries, a self-supporting ministry focused on helping individuals come to a better understanding of the Bible and bringing them into a closer relationship with our Lord and Savior Jesus Christ. Advent Truth Ministries lifts up Jesus Christ as the ONLY Savior of the world. It is particularly focused on educating, motivating, and inspiring people to embrace and share God’s Sabbath Truth in opposition to the Roman Catholic Church’s call for Sunday sacredness, a tradition contrary to the Bible, which she claims as her mark of authority in religious matters. Additionally, I host the Great Controversy Book Club which meets every Friday evening via call-in conference.

Andy Roman: Our world is definitely changing. This is not the same country we grew up in. What are some of the concerns you have for our nation and do you believe we are in the last days that Jesus warned about?

Pastor Aubrey Duncan: Yes indeed, I do believe that we are living in the closing scenes of earth’s history. The world is profoundly changing. We are seeing prophecy fulfilling before our eyes. God has been very gracious to give us a proper understanding of the events that are taking place today and where they are ultimately headed. We see the papal power gaining ever more international influence in all areas of our lives: religious, political, economic, and social.

Just as the Bible prophesied in the 13th chapter of the Book of Revelation, we see the European Ecclesiastical Establishment joining forces with the United States in all the areas mentioned above. The prevailing narrative is that this union will bring unity and equity, not only to the people of America, but to the world over. The Bible, however, foretells it quite differently. The sure Word of Prophecy testifies that that universal amalgamation and concentration of religious, economic and political powers will lead to a season tyranny, oppression and despotism such as the world has never seen in the history of the planet (Daniel 12:1). It is exactly as Jesus and the ancient prophets foretold.

Andy Roman: The popular sentiment that has invaded the churches today comes from the encyclical of Pope Francis, Fratelli Tutti, which is a call for solidarity. It is a call to all religions to deepen their relationships with each other and to create a more visible unity. Do you see this as part of the prophetic fulfillment of the last days and, if so, how should God’s people respond?

Pastor Aubrey Duncan: Fratelli Tutti is the blueprint for the New World Order as envisioned by Pope Francis and his church. It is the most radical form of Marxism that can ever be imagined. One of my main concerns is that the leaders of the free world, including the United States, have failed to recognize that. How those leaders can so passionately go along with Francis’ plan is quite puzzling to me. Of course, God has already told us that one day they would discover what we have long been preaching and teaching about it. Sadly, it will be too late when their eyes are opened to true nature and purpose of the Roman power (Revelation 17:16-18).

We are told exactly how we should respond. I couldn’t put is any clearer than God’s messenger to His Remnant Church. She counsels and comforts::

“Those who place themselves under God’s control, to be led and guided by Him, will catch the steady tread of the events ordained by Him to take place. Inspired with the Spirit of Him who gave His life for the life of the world, they will no longer stand still in impotency, pointing to what they cannot do. Putting on the armor of heaven, they will go forth to the warfare, willing to do and dare for God, knowing that His omnipotence will supply their need” {Mar 161.6}

Andy Roman: What would you say to those who believe that the Third Angel’s Message is not for this time and that all we need to do is preach about Jesus?

Pastor Aubrey Duncan: They are either willingly ignorant or totally deceived and therefore do not know what they are talking about. The Three Angels’ Message is ALL about Jesus: Reflecting His character to a doomed and dying world, exposing the enemy of Christ and warning His people not to be ensnared by her.

Andy Roman: You are working on a project to reach out to our political leaders in Washington, D.C. with the Three Angels’ Messages. Tell us what your plan is.

Pastor Aubrey Duncan: I am happy to. The Lord has impressed me to share the book, the Great Controversy with the political, religious, media and other thought leaders in the Washington, D.C. area. By His grace, I have identified and am targeting the high-income zip codes where these influencers reside. Over the past few years, I have received the support of many donors allowing me to send out about 16,000 books. The goal is 20,000 and I humbly solicit the support of your readers to help complete the project.

As you known, this book vividly addresses the current religious/political climate not only in America, but around the world, particularly in Washington D.C., America’s capital. We have been admonished, rather specifically, to reach the class of people I am targeting. We are encouraged:

“For some time I have been strongly impressed that decided efforts should be put forth to proclaim the testing truths of the third angel’s message in the city of Washington, the capital of the American nation. It is a sad thing that our record stands as it does, showing so little accomplished in this city. If there is any place in the world that should have the full rays of present truth, it is Washington, the city that is the very heart of this nation. Those who act a prominent part in framing laws for the nation should understand what is written in the law of God, which lies at the foundation of all right laws”
{RH July 28, 1903, par. 1}.

With the rapid ascendancy of the papal power and as Francis seeks to solidify their world-wide power grab, my sincere prayer is that your readers would heed the inspired counsel and support this critically important project.

Andy Roman: How can someone who wants to help you with this project get in touch with you?

Pastor Aubrey Duncan: If anyone is impressed to support this effort, they can donate at my website where you can also get more information. https://www.adventtruth.org/which-way-america/

I am looking forward to the generous support of all who have come to know about this very timely and essential project at this juncture in prophetic history.

Pastor Aubrey Duncan can be reached through email as well: adventtruth@yahoo.com