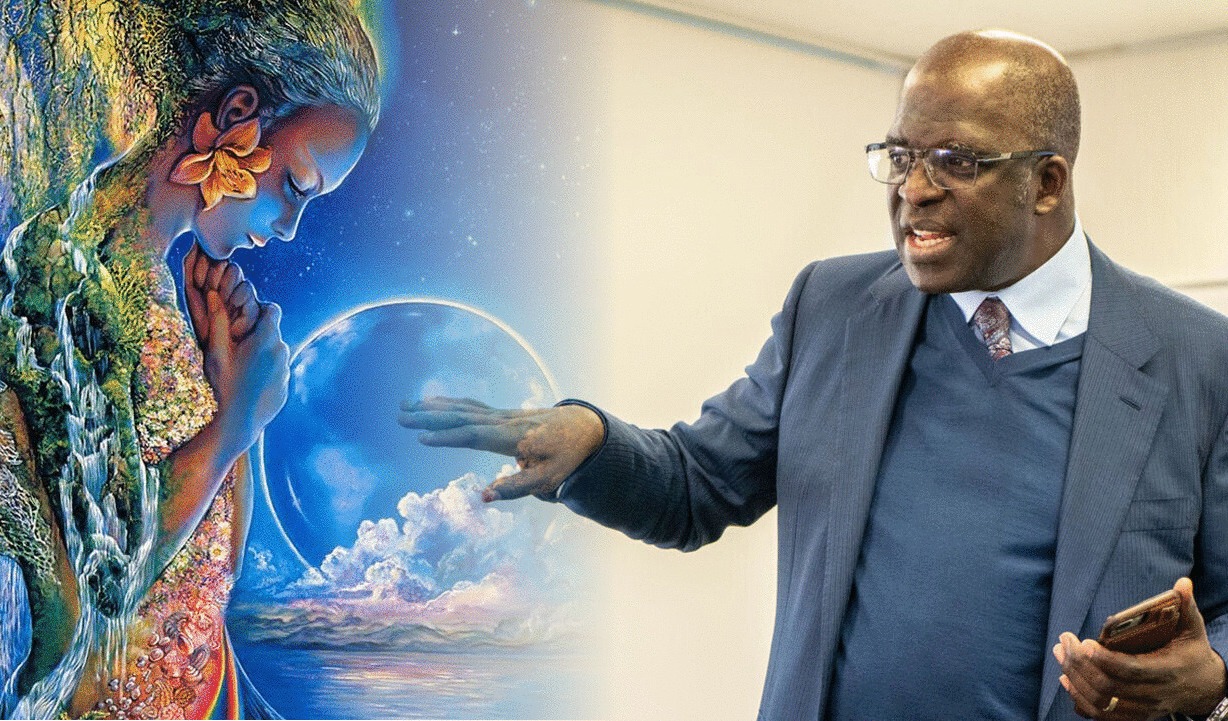 The prayer is called the Canticle of Creation (Brother Sun and Sister Moon) and was composed by Saint Francis of Assisi. This religious song was recited on September 3, 2020 during the committee meeting of the Global Christian Forum (GCF), an international ecumenical forum where Roman Catholics, Evangelicals and Seventh-day Adventists work together towards peaceful coexistence. The Pontifical Council for Promoting Christian Unity (PCPCU), the Vatican’s representative at the GCF, published the news about the Global Christian Forum’s 2020 Committee Meeting in which the pantheistic prayer of Saint Francis to Mother Earth was recited. 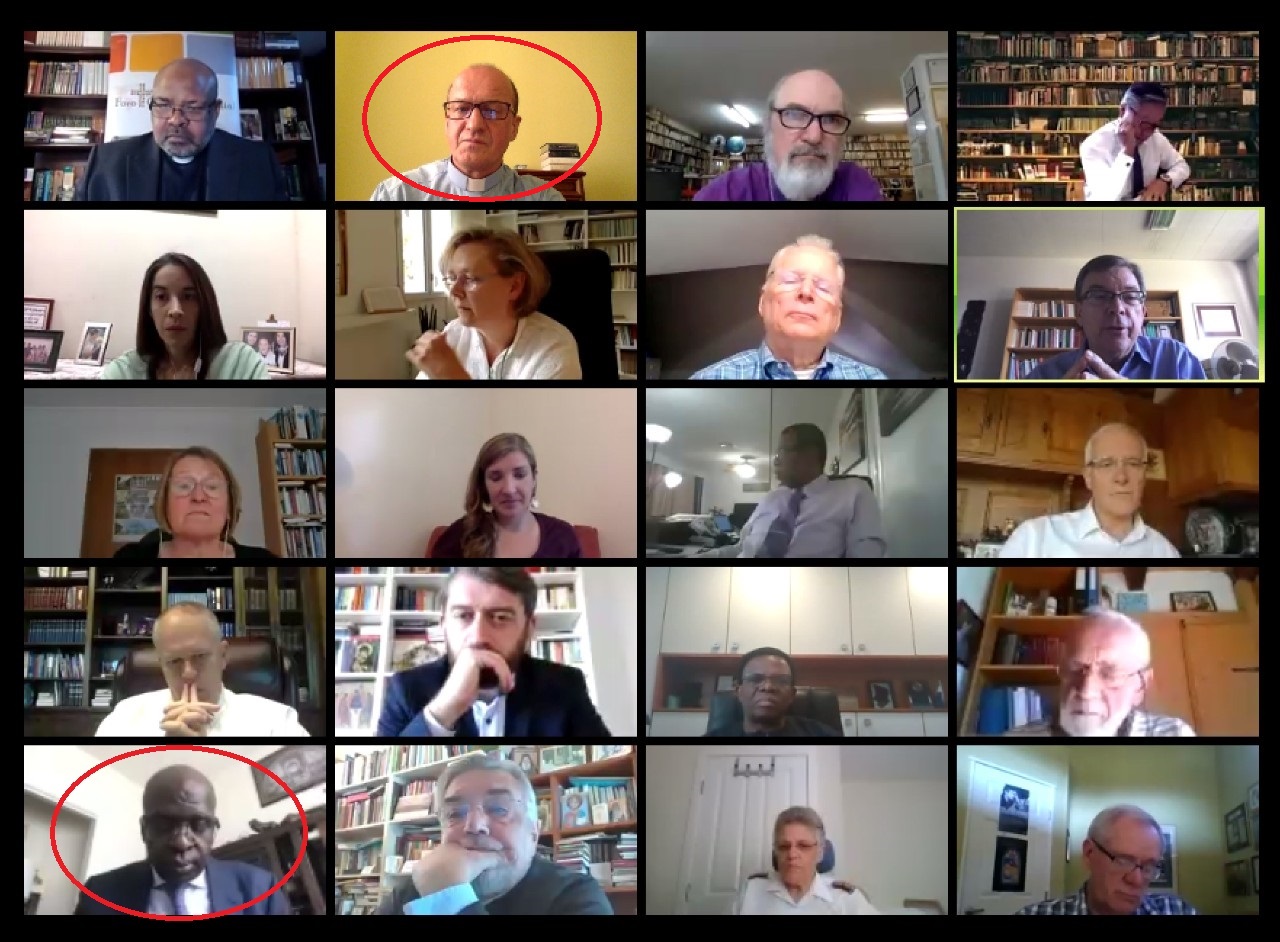 Pictured above is the Global Christian Forum’s 2020 Committee Meeting. [1] Ganoune Diop of the General Conference of Seventh-day Adventists, bottom circle, and Father Andrzej Choromanski of the Pontifical Council for Promoting Christian Unity, top circle, were present. The PCPCU reported that during the committee meeting the GCF discussed the need to foster mutual respect, address common concerns and promote Christian unity. The GCF also pledged to “intensify” its efforts to encourage “regional and national gatherings of Christian leaders.” Then the Vatican-led PCPCU published the following:

“Taking place during the time when the ecumenical family celebrates the Season of Creation, the meeting ended with the prayer of the Canticle of Creation of Saint Francis. The Committee meeting was preceded the day before by the meeting of the Facilitation Group, which is an advisory body to the Secretary composed of representatives of the four so-called pillars of the GCF, including the World Council of Churches, World Evangelical Alliance, Pentecostal World Fellowship and Pontifical Council for Promoting Christian Unity.” [1] 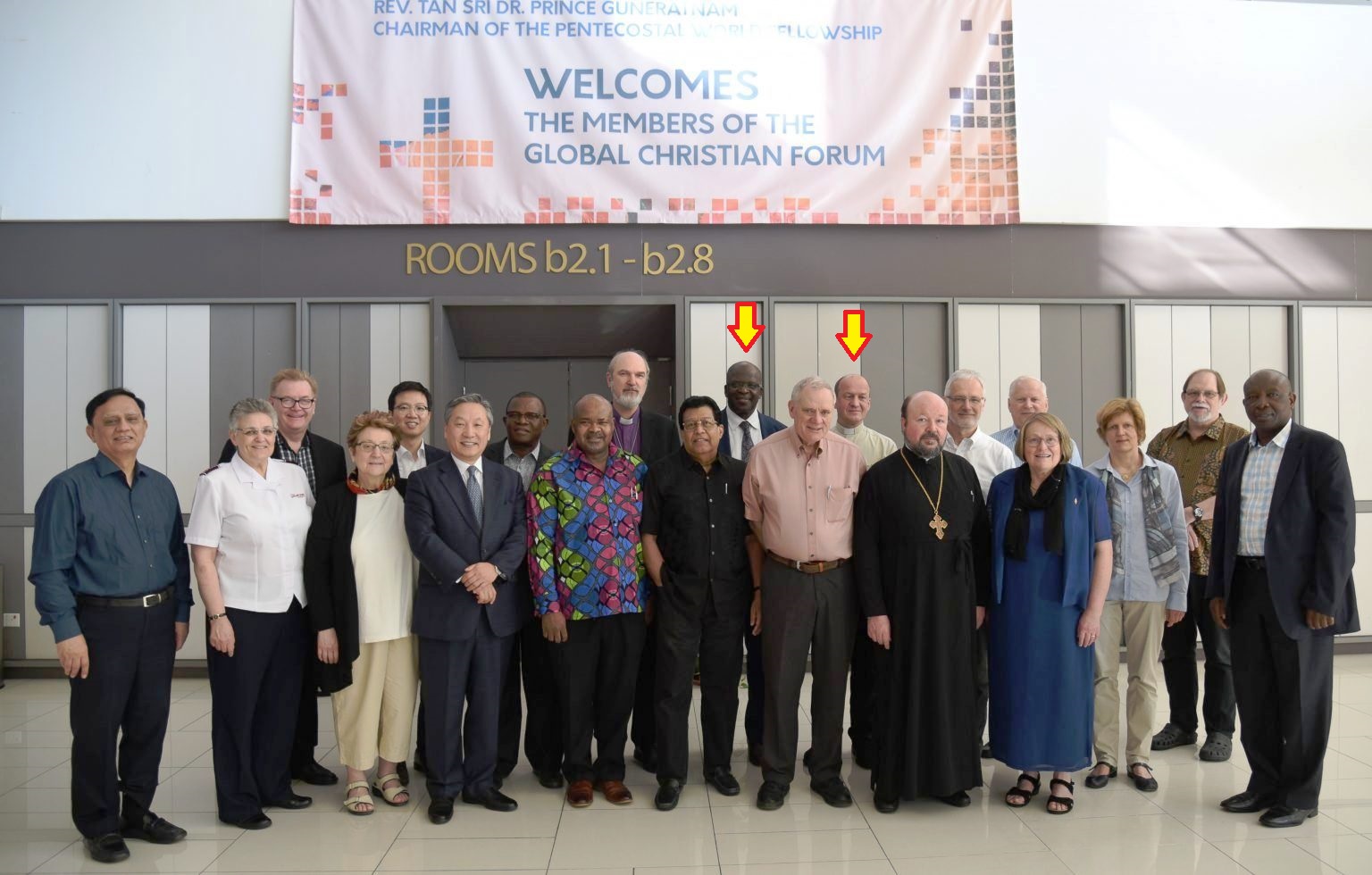 These are the current members of the Global Christian Forum Committee (2020). You can see Ganoune Diop standing next to the Vatican representative from the PCPCU, Father Andrzej Choromanski. [3]

Praised be You, my Lord, with all Your creatures, especially Sir Brother Sun.

Praised be You, my Lord, through Sister Moon and the stars.

Praised be You, my Lord, through Brothers Wind and Air.

Praised be You, my Lord, through Sister Water.

Praised be You, my Lord, through Brother Fire.

Praised be You, my Lord, through our Sister, Mother Earth, who sustains and governs us.

Praised be You, my Lord, through Sister Death. [5]

“LAUDATO SI’, mi’ Signore” – “Praise be to you, my Lord”. In the words of this beautiful canticle, Saint Francis of Assisi reminds us that our common home is like a sister with whom we share our life and a beautiful mother who opens her arms to embrace us. “Praise be to you, my Lord, through our Sister, Mother Earth, who sustains and governs us, and who produces various fruit with coloured flowers and herbs” (Laudato Si’, paragraph #1). [6]

“Everything is related, and we human beings are united as brothers and sisters on a wonderful pilgrimage, woven together by the love God has for each of his creatures and which also unites us in fond affection with brother sun, sister moon, brother river and mother earth.” (Laudato Si’, paragraph #92). [6]

How much longer? My brothers and sisters and every fellow-believer in the Three Angels’ Message – HOW MUCH LONGER? How long will the leaders at the highest levels of the church continue to waste time, resources and energy in the futile pursuit of “unity” with these religious organizations that have absolutely no intention of embracing the truth of the Three Angels’ Message; but instead, are promoting Mother Earth worship, Sunday sacredness, pagan mysticism, eco-revolution and ecumenism?

Yet these ecumenical encounters continue over and over again, with no end in sight and no prospect of real achievement; except for the concessions and compromises that Seventh-day Adventists make – becoming more and more like the world. This is what Rome is laboring to accomplish. They are replacing God with nature. Ecology is fast becoming the new gospel for Christianity and more and more people are embracing paganism and bringing nature worship to the church.

We cannot grasp the critical hour in which we live. We have leaders at the General Conference level who have no problem participating in, witnessing and listening to these pantheistic ceremonies, year after year. They have made it clear that they want to listen to pagans, rather than listen to the warnings of their fellow Seventh-day Adventist believers. In the eyes of the General Conference, those who dare question these activities are too extreme, too fanatical and too pharisaical. If this is true, then Elijah, Moses, Enoch, Jeremiah, Isaiah, Ezekiel, the apostles, Paul, the first century Christians, the Reformers and even our Seventh-day Adventist pioneers were also extreme, fanatical and pharisaical, because they too rejected the blasphemous teachings of paganism and idolatry.

If nothing changes, notice what will eventually happen:

“Many souls will come from other denominational churches, and at the eleventh hour will obey all the truth, because they have not set themselves in array against heaven’s light, but lived up to all the light they had: while those who have had great light, large privileges and opportunities, and have failed to live in the light and walk in the light, will drop out by the way. Their light will shine less and less until their lamps will go out” (1888 Materials, p. 710).

We are indeed witnessing the devil’s final assault against the faith. There is a relentless, unyielding battle between the Three Angels’ Message and the pantheistic superstitions of Babylon. Why can’t we recognize this? Instead of helping others see the everlasting gospel which would help people escape the superstitions of paganism, it seems that the world is helping us to embrace radical environmentalism and explore the mystical teachings of Mother Earth. It is heartbreaking to have to say that the Global Christian Forum is just ONE OF THREE global interfaith organizations in which the General Conference of Seventh-day Adventists and the Pontifical Council for Promoting Christian Unity are joined together. The other two are the Conference of Secretaries of Christian World Communions (CS/CWC) [7] and the G20 Interfaith Forum. [8] We are truly up the creek without a paddle.

We pray for those at the General Conference. But even though we pray for them, we must resist and reject these dangerous policies. We must denounce these pantheistic efforts and confront them. We must encourage God’s people to reject them too because this is all part of the deadly heresy that first appeared in 1903 through the pantheistic teachings found in the book, The Living Temple:

“In the book Living Temple there is presented the alpha of deadly heresies. The omega will follow, and will be received by those who are not willing to heed the warning God has given … We need not the mysticism that is in this book. Those who entertain these sophistries will soon find themselves in a position where the enemy can talk with them, and lead them away from God.” (Selected Messages, vol. 1, pp. 200, 202)

The only solution for nature worship, green Sunday laws and radical environmentalism is to proclaim the Three Angels’ Message of Revelation 14:6-12 to the entire world, in a loud voice, without fear or hesitation. This is a call to fear God, reflect His character, obey His commandments and embrace His memorial to creation – the seventh-day Sabbath. It is also a call to come out of Babylon, reject the mark of apostasy (the green Sunday law), forsake paganism and help others to do the same. We must call others to come out and keep the commandments of God and the faith of Jesus (Revelation 14:12).

“Christ is coming the second time, with power unto salvation. To prepare human beings for this event, He has sent the first, second, and third angels’ messages. These angels represent those who receive the truth, and with power open the gospel to the world” (Bible Commentary, vol. 7, p. 979).