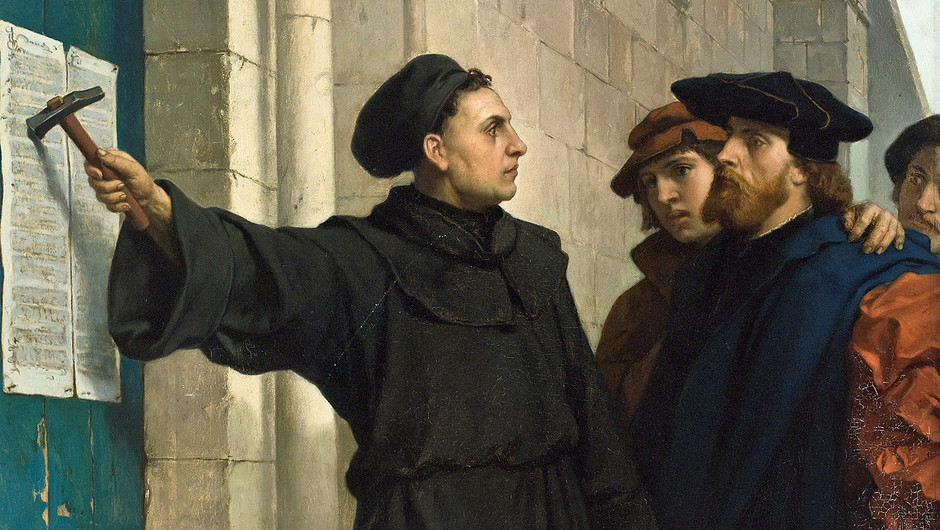 In the small town of Wittenberg, Martin’s hammer could be heard,
A love for truth was in his heart,
The Reformation was to start.

In the church he loved so dear,
1517 was the year,
October 31, was the day,
While many people came to pray.

He nailed his theses to the door,
So all could read what God abhors,
The wicked work of men corrupt,
True faith in Christ they did disrupt.

By selling grace for coins of gold,
The souls of men were bought and sold,
“When a coin makes the coffer ring,
A soul from purgatory springs.”

Luther saw Tetzel’s money cup,
His zeal for God consumed him up,
He cried against all their designs,
That paid for churches, temples, shrines.

With pen and voice he taught God’s Word,
The truth throughout the land was heard,
“God’s word alone defines the faith,
The lies of men cannot replace.”

“We’re bonded to the word of God,
All other tests will end in fraud.”
The priests and popes became enraged,
To see their rule become upstaged.

They called on Luther to appear,
To make his protest disappear,
“Recant, Recant or you will die,
The Pope’s own law you do defy.”

Luther stood with one hand held high,
And pointed to the heaven’s sky,
“How can I ever dare reject,
The word of God that I respect.”

“And if you show me from His word
The errs I teach that you have heard,
I’ll gladly burn my writings now,
And all my teachings disavow.”

“But if you can’t from God’s own word,
Show me just how the truth I blur.
And if you use the words of priests,
To try to ban all my beliefs.”

“Then all will know just where you stand,
Your house is built upon the sand,
My faith holds fast for it stands strong,
Based on God’s word which can’t go wrong.”

“It will endure the test of time,
For it reveals your sins and crimes,
So here I stand, I’ll do no less,
God’s Holy Word can none suppress.”