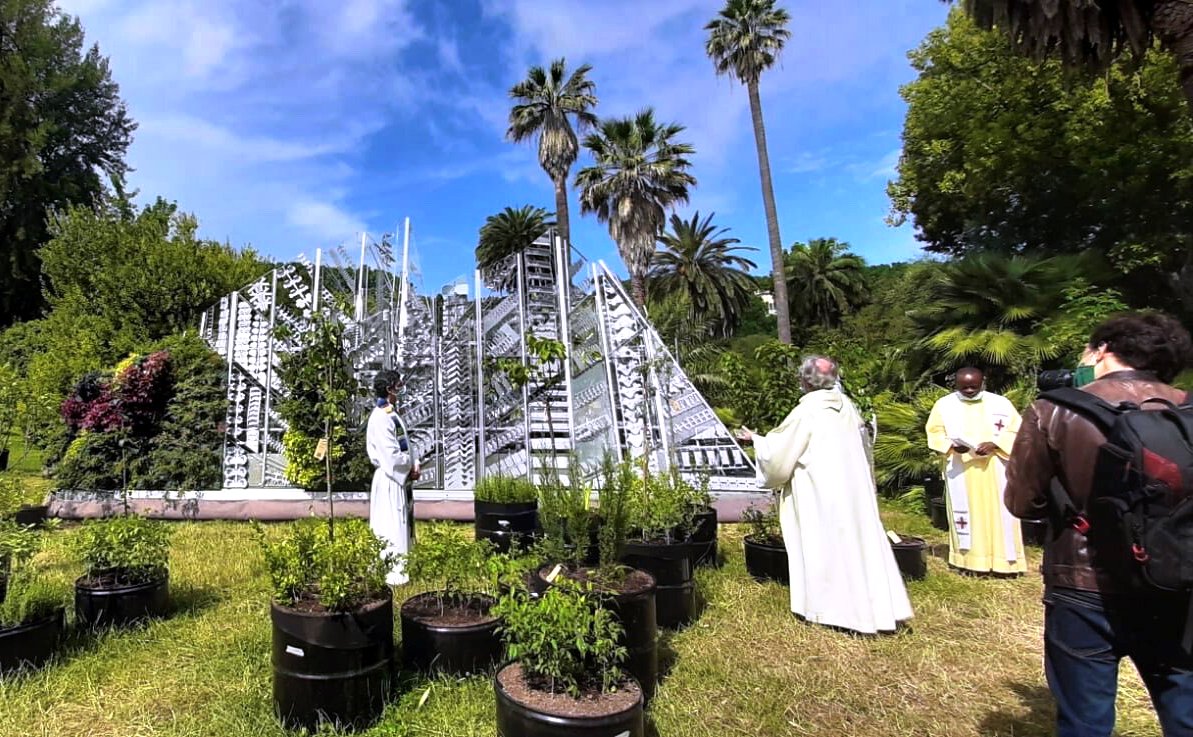 2,000 years of gospel truth is being replaced before our eyes with the new Laudato Si’ Chapels, Temples and Gardens that are being constructed all over the world. These Laudato Si’ worship centers are being spearheaded by two organizations: The Discastery for Promoting Integral Human Development, the department within the Vatican in charge of promoting Catholic social doctrine [1] and the United Nations. 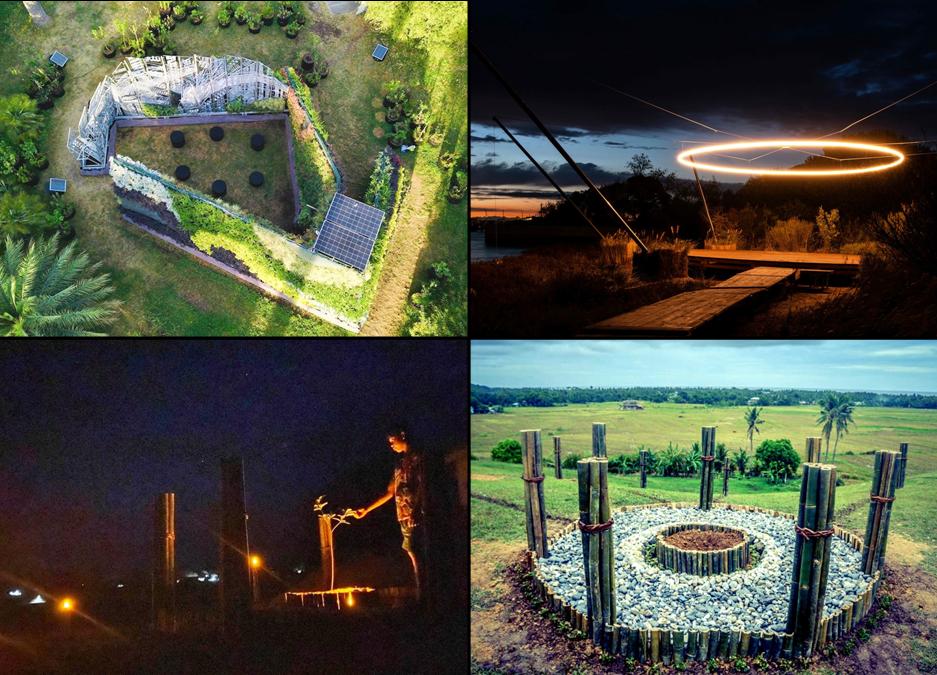 The Vatican News recently reported that these Laudato Si’ sanctuaries are a “concrete fruit of the commitment to creation proposed by Pope Francis in Laudato Si’.” [2] In other words, these “sacred” green spaces are a fulfillment of the Pope’s encyclical. Notice how the United Nations is now involved in the creation of these Ladauto Si’ shrines and spaces:

“Living Chapel is a team effort, sponsored by the Dicastery for Promoting Integral Human Development and the contributions of Canadian architect Gillean Denny, and about a hundred students from Pennsylvania State University, Rome’s La Sapienza University, the United Nation and the Global Catholic Climate Movement.” [2]

So the United Nations has become an agency to promote Laudato Si’. Secular civil leaders are working to promote the decrees of Rome. Biblical prophecy has actually predicted all of these events in Revelation 13 and 17. Notice how the UN describes the Laudato Si’ sanctuaries in their own words:

“The Living Chapel unites concepts of Nature, Art, Music and Architecture to inspire people to join together in caring for our world. A sacred space of serene harmony inspired by Saint Francis of Assisi, Pope Francis, and the UN’s Sustainable Development Goals … Furthermore, through the creation of Laudato Si’ Gardens and Living Sacred Spaces globally, the Living Chapel will encourage collaboration to protect and rehabilitate the natural environment through concrete actions.” [3]

The United Nations, a global multinational governmental organization, is now dedicated to creating Laudato Si’ sacred spaces. The Pope’s encyclical Laudato Si’ has a provision for Sunday rest. Now we see that the United Nations is not only promoting “climate change” but also the Sunday encyclical. Church and state are coming together to promote the doctrines of Rome.

Laudato Si’ Chapel and the Ring of Light (Mother Earth) 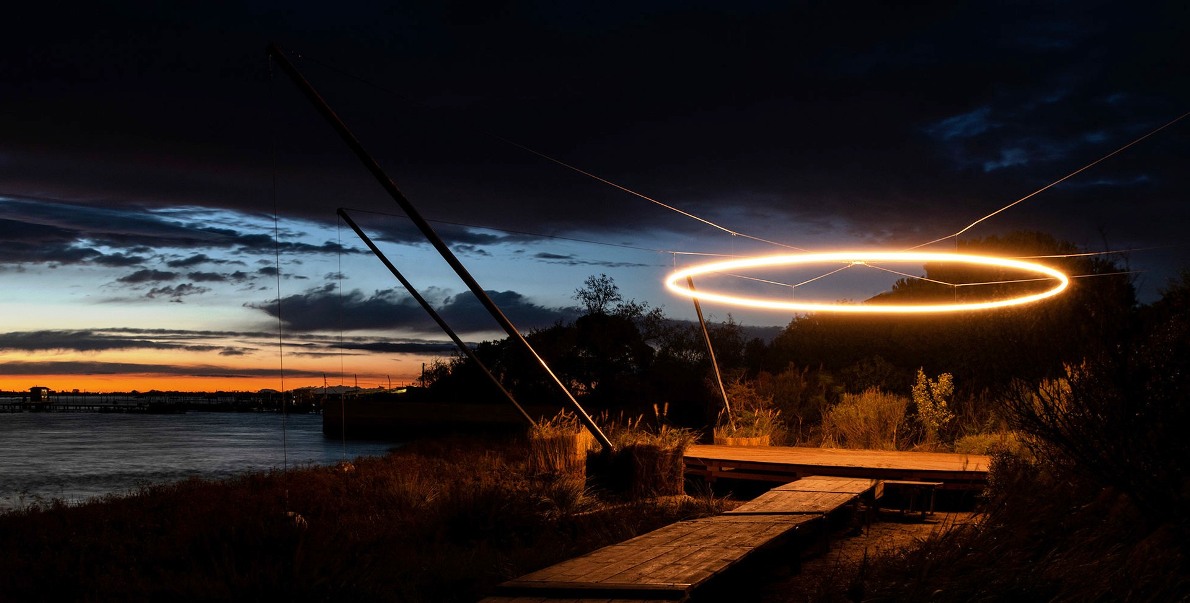 The image above is the new Laudato Si’ Living Temple and Garden situated on the Porto Caleri lagoon in the Po Delta Park in Rosalina Italy, just outside Venice. The suspended ring of light symbolizes the light of the world of “SORA MADRE TERRA”, or our Sister, Mother. [4] The sacred spaces of Laudato Si’ are teaching that Mother Earth is the light of the world. That’s what the news sources are saying.

The new light, the new gospel, the new global emphasis and the new object of our worship is not Jesus, but Mother Earth. The light of the world is now a ring of light that represents “our Sister, Mother.” This is the path that Rome and the United Nations are trying to drag the rest of the religious world into – pantheistic spiritualism. 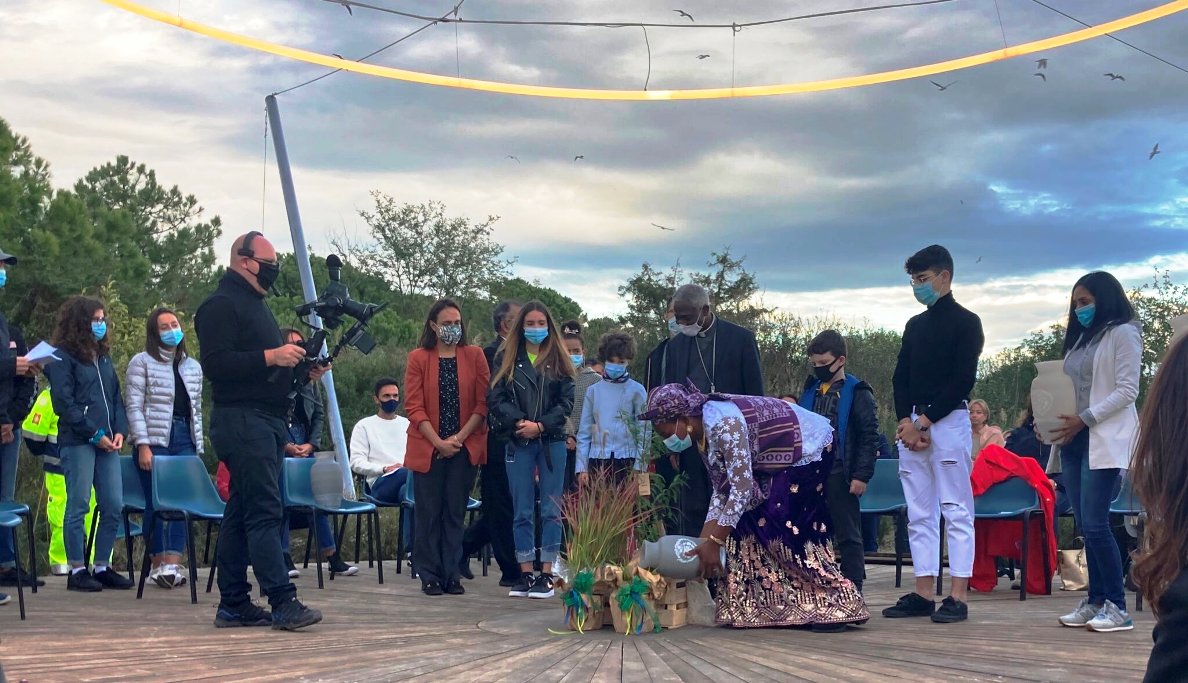 An offering under the ring of light.

Rome’s Dicastery for Promoting Integral Human Development has been coordinating the establishment of other Laudato Si’ sanctuaries around the world. In addition to the one in Rome, a second sacred space has just been dedicated in Rosolina, Italy, near Venice. During the dedication of this Laudato Si’ Garden, civic and religious leaders gathered to commemorate Pope Francis’ vision.

In the video above at minute 2:33, you will see Catholic priest Joshtrom Issac Kureethadam. He is the Coordinator of “Ecology and Creation” at the Dicastery for Promoting Integral Human Development. Catholic priest Joshtrom Issac Kureethadam explains that these Laudato Si’ spaces are for us to have, “Union with the Creator, union among us, union with the earth and all the creatures of the earth.” 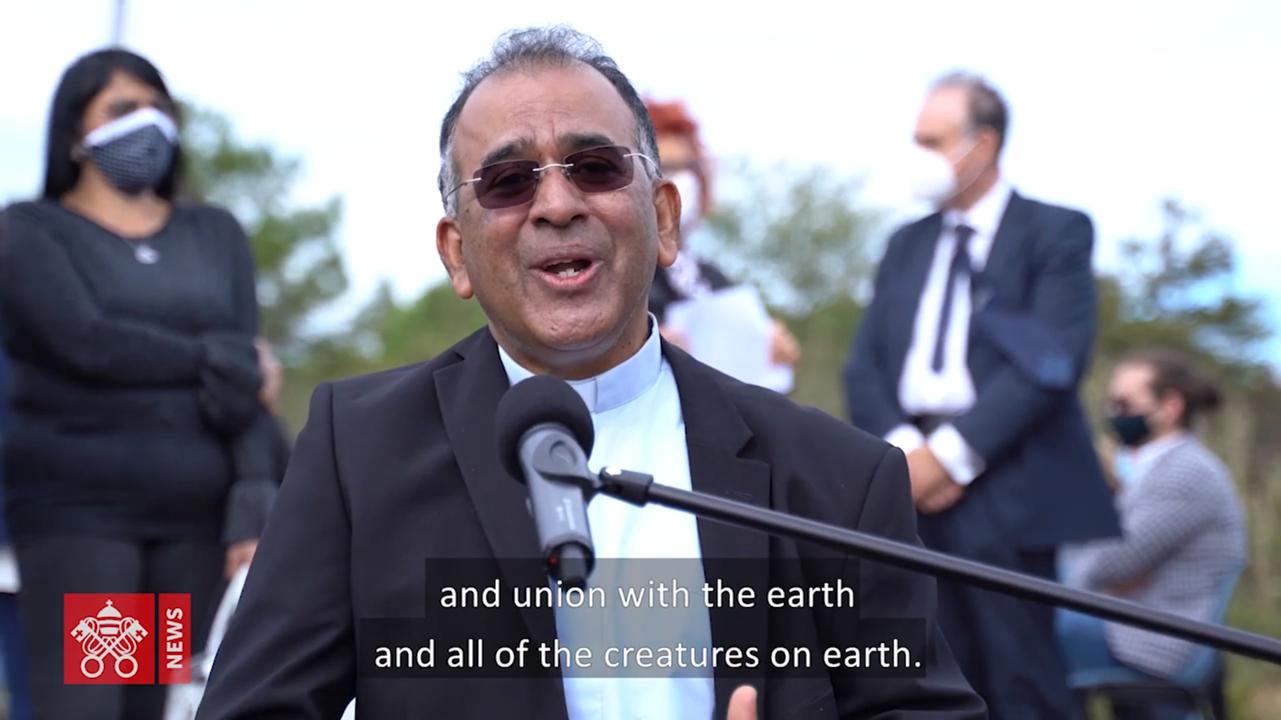 Rome’s priest/agent who said that Laudato Si’ sacred spaces are for union with the earth.

This includes everyone, including plants, rocks, fire, trees, animals, water and air. Rome’s agent on climate change is asking us to participate in pagan spiritualistic celebrations with the “earth.” Really, where does God sanction this in His word? In John 17:22 we are told to be one with Jesus and the Father, but not with the earth. This is pure pantheism.

This morning, among scents and trees shadows of the Botanical Garden, at 10 am #Monsignore Bruno M. Duffé #blessed #TheLivingChapel. Then #FatherJoshtromKureethadam celebrated the first #LaudatoSi #mass for the #Encyclical anniversary. pic.twitter.com/Wj5MQ64NAw

Here is the same Catholic Priest Joshtrom Issac Kureethadam offering plants as an offerings to Mother Earth during the first Laudato Si’ Mass at the Laudato Si’ Chapel in Rome.

The Tweet above says: “Laudato Si’ Garden at the Garden of Confucius in Rome?” This is Babylon. Apparently, at the Laudato Si’ Chapel you have to have an offering for Mother Earth. According to the new Laudato Si’ Mass, plants and flowers are the new offerings to the new gods of nature. 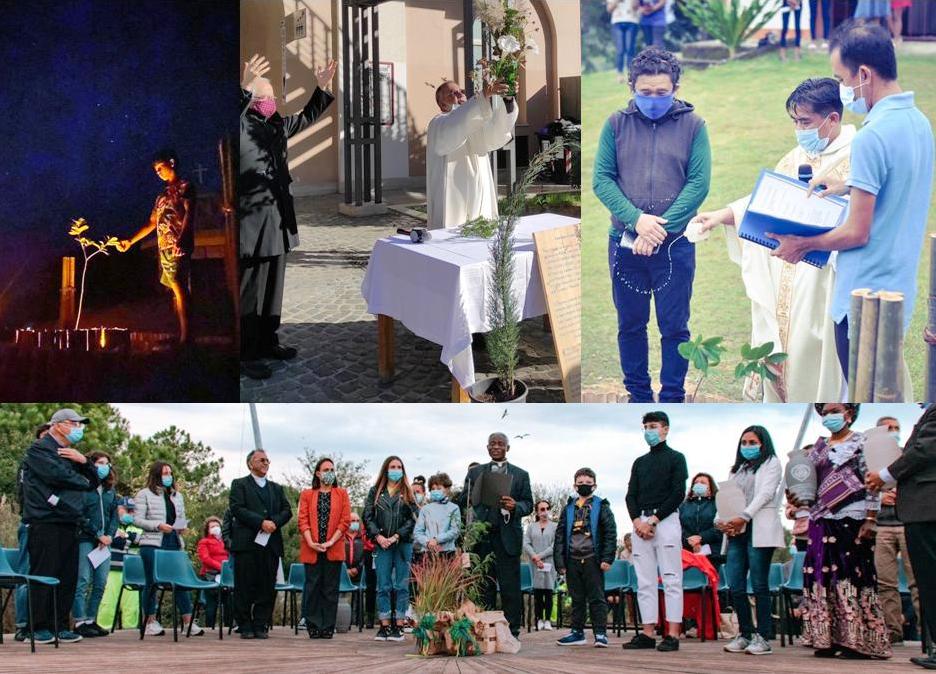 This is strange fire being offered (Leviticus 10:1-2). It’s spiritualism. This is not an offering to the Creator God of the Bible. Pagan idolatry is being advocated by the Vatican during these ceremonies dedicated to Mother Earth. Instead of preparing for the eternal and final home that God is preparing for us (John 14:1-3), the new mission is to shape and mold this present world with nature-worship, religious mysticism and radical environmentalism. 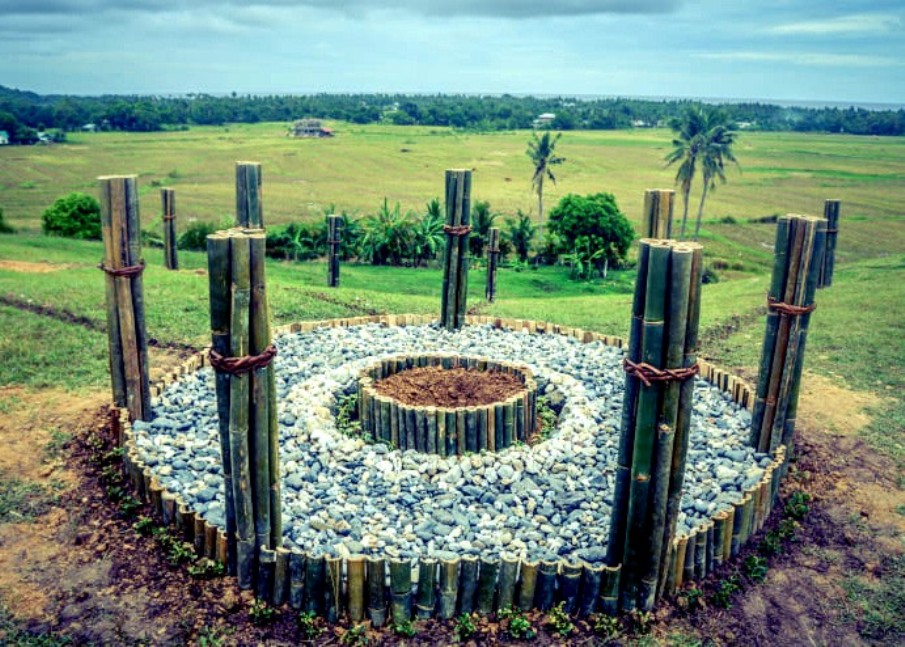 A new Laudato Si’ Chapel was also inaugurated in Romblon, Philippines on November 7, 2020. This is as an open-air chapel to promote the “integral ecology” as taught in Pope Francis’ encyclical Laudato Si’. [5] This means communion with our common home, the earth. This means respect and reverence for the planet. This means being in harmony with the new sustainable universe. 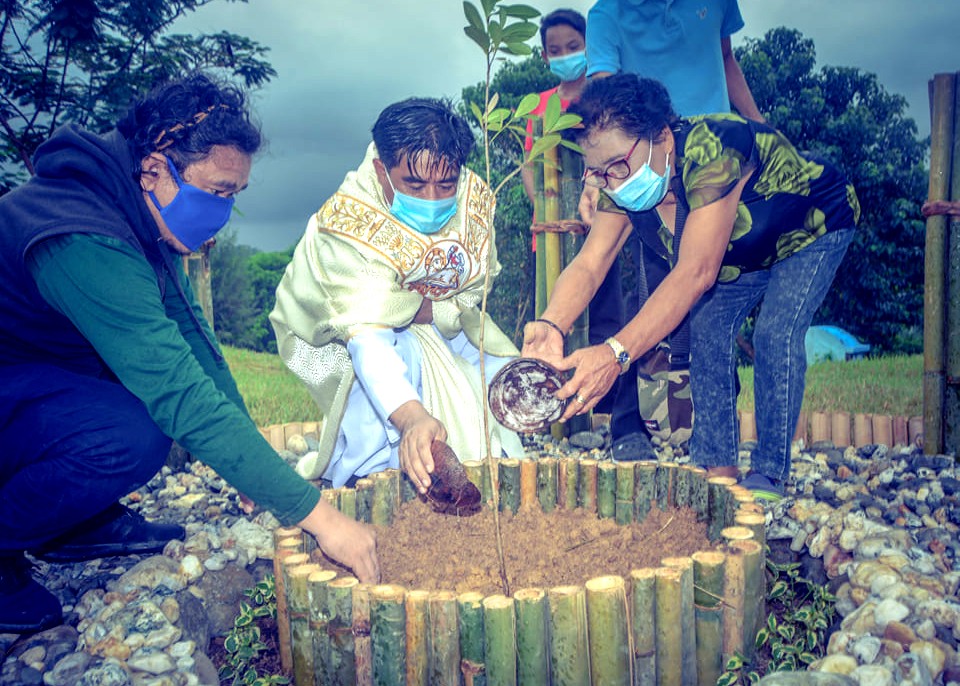 The “inspiration” for this pagan nature temple came from Pope Francis’ encyclical Laudato Si’. The news and images come from an organization called Living Laudato Si’. [5] 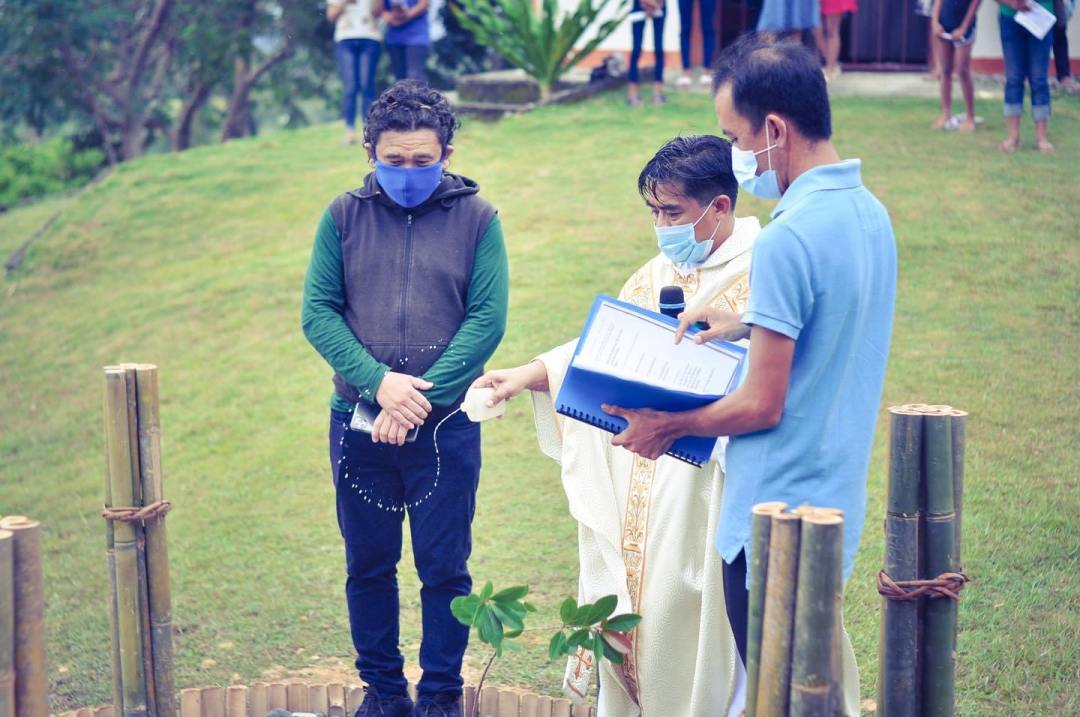 The Catholic priest is performing a water offering. This is one of the most common devotions in pagan eastern religion. This sprinkling of water on the small tree is an act of consecration. This is a “religious” ceremony being performed on behalf of nature and in an official Laudato Si’ sacred space. This is not worshipping the God of heaven. They are venerating the false pagan goddess called Gaia or Mother Earth. 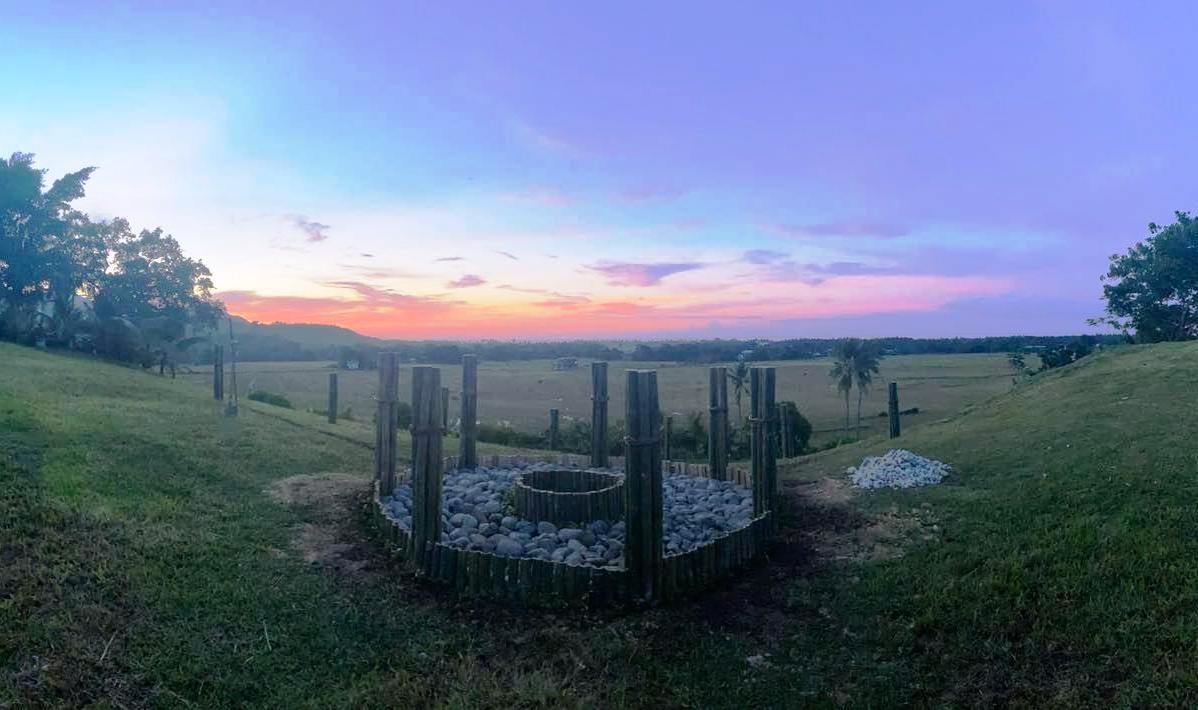 The sun is setting. So what happens next? Are Laudato Si’ sacred spaces closed at night? Is Pantheistic Spiritualism limited to just daylight hours? Not at all. 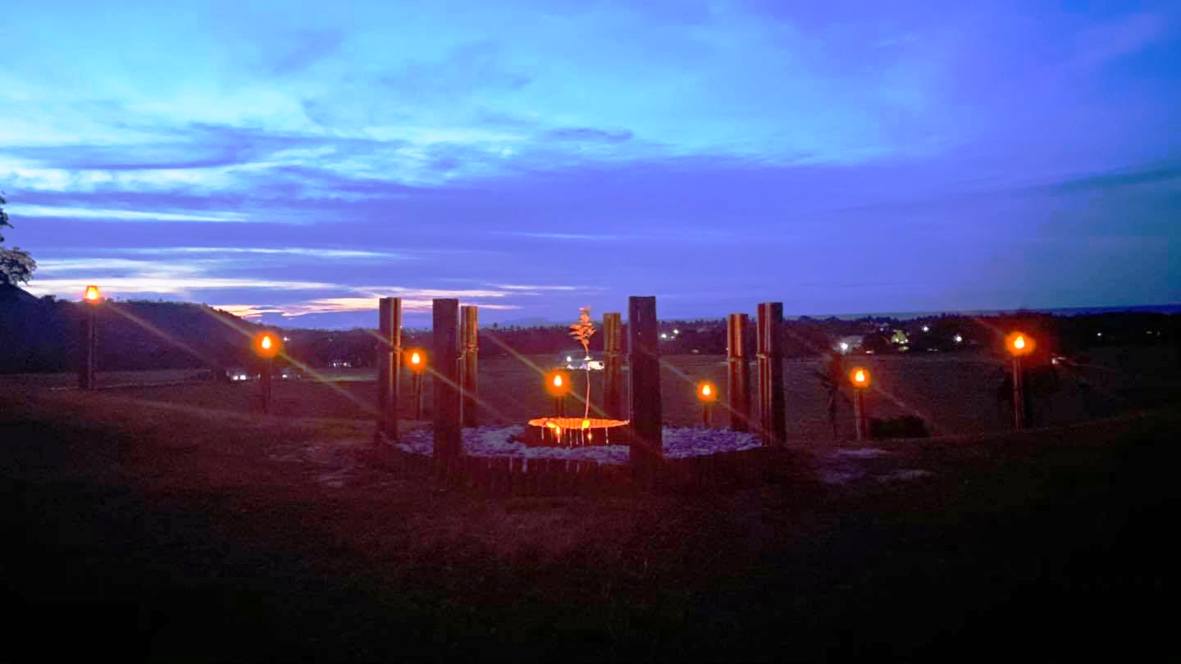 The lights come on.

Rome is on a mission to transform the churches into a more loving, a more inclusive and a more culturally diverse form of worship. They are working to unite the entire religious world into one pantheistic family. Rome, of course, will be at the head of this Green Religious New World Order. This is how Rome says that we can end the division and hostilities between different religions. 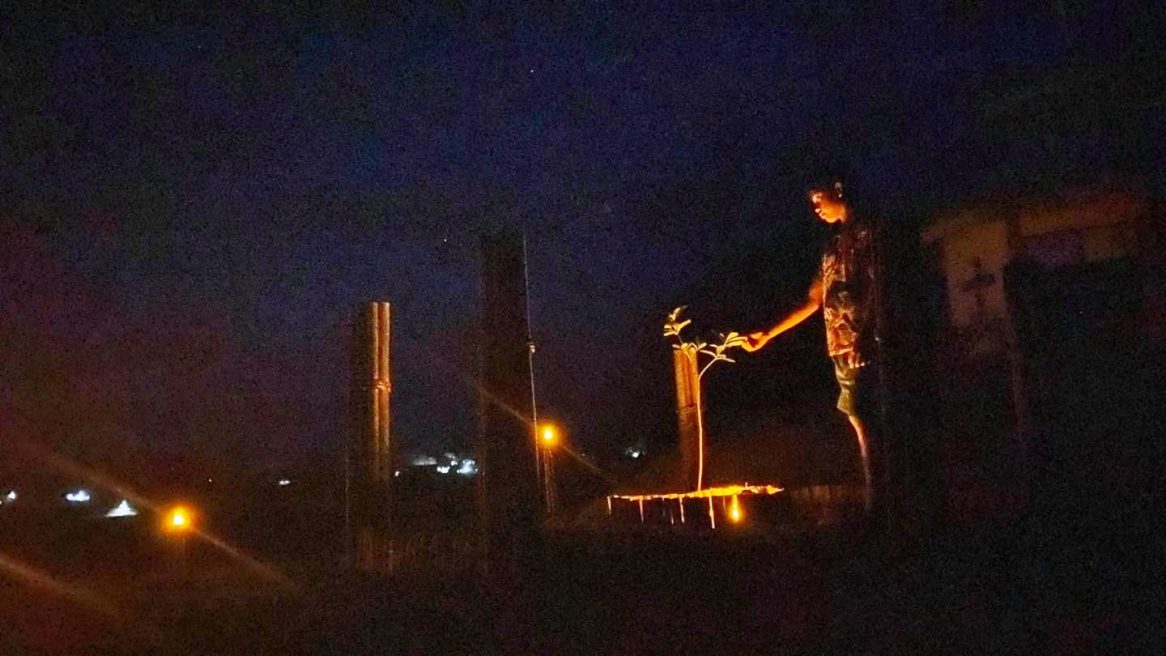 The veneration continues into the night.

The Vatican is spreading a “devotion” to paganism. This is entering the realm of the occult. Nature is being reverenced because it is sacred according to eastern pagan philosophy. This is the message Rome wants everyone to embrace. They want to involve us in pagan spiritual celebrations. 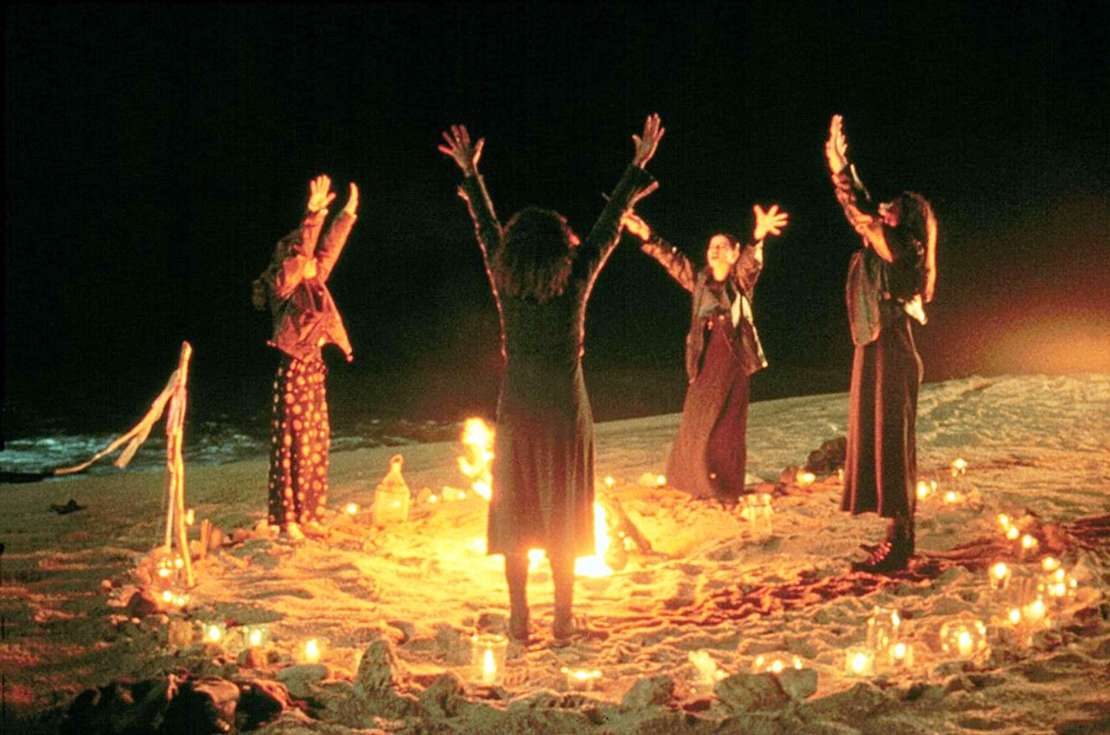 A rejection of divine revelation leads to relativism, and relativism is leading the world to pantheism and spiritualism. Biblical faith and truth are being eliminated. The word of God is no longer the way to salvation. The Bible has become nothing more than a mere illusion. What’s left? Paganism, nature worship and Sunday laws. This is always the result when biblical truth is rejected:

“Spiritualism is about to take the world captive … Superhuman power is working in a variety of ways, and few have any idea as to what will be the manifestations of spiritualism in the future … The signs and wonders of spiritualism will become more and more pronounced as the professed Christian world rejects the plainly revealed truth of the Word of God, and refuse to be guided by a plain ‘Thus saith the Lord,’ accepting instead the doctrines and the commandments of men.” (Manuscript, 92, 1894).