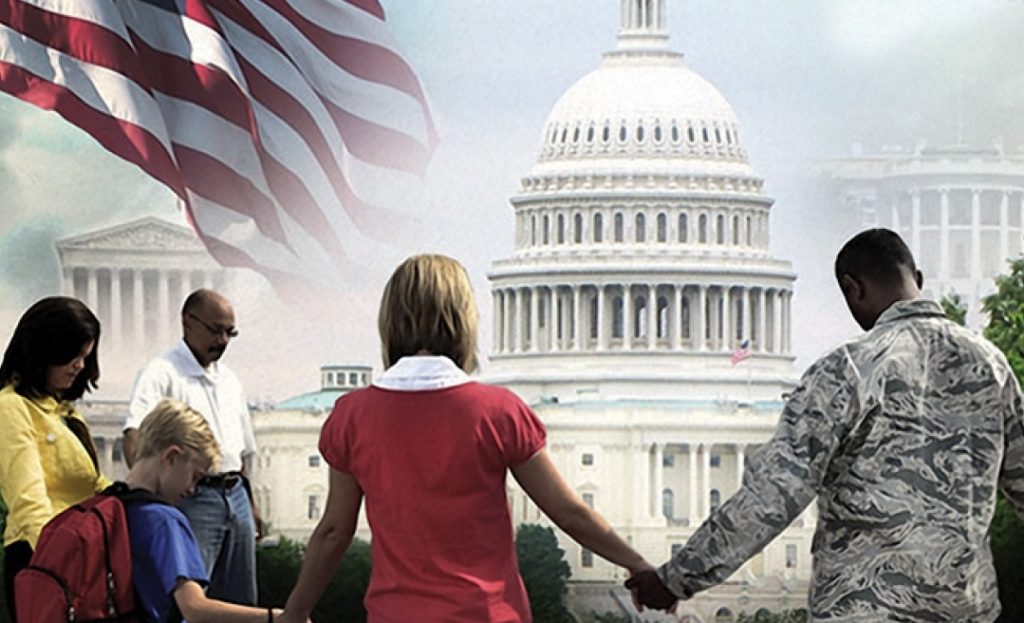 The 2018 National Day of Prayer will take place on Thursday, May 3, 2018. Millions of Americans across the country and many religious leaders will be making intersession to God calling our nation back to repentance and revival. America is in deep trouble when we consider the unresolved gun violence, immigration crisis and racial tensions that is sweeping our society.

The churches find themselves under attack by a culture that is eradicating every trace of Christianity from our nation. There is little doubt that our Judeo-Christian values are being abandoned. These values made our nation great, for we are told in the Scriptures that, “Righteousness exalteth a nation: but sin is a reproach to any people” Proverbs 14:34.

What we are seeing today is a complete rejection of the founding principles of this nation. The prevailing iniquities and evils have brought us to a boiling point. There now exists deep-seated antagonism and hostility towards the Bible and anything Christian.

We are living in a climactic period. We are watching with horror as the institutions of our nation and society at large are openly celebrating sin while the principles of Christianity are being scorned. This will have consequences that will bring a bitter harvest: “The Lord is with you, while ye be with Him; and if ye seek Him, He will be found of you; but if ye forsake Him, He will forsake you” 2 Chronicles 15:2.

The Churches Role for the Blatant Immorality

To a certain degree, the churches in this country are responsible for the complete breakdown of society and its disregard of law and order. Look at what God says:

“Hear, O earth: behold, I will bring evil upon this people, even the fruit of their thoughts, because they have not hearkened unto My words, nor to My law, but rejected it. To what purpose cometh there to Me incense from Sheba, and the sweet cane from a far country? Your burnt offerings are not acceptable, nor your sacrifices sweet unto Me. Therefore thus saith the LORD, Behold, I will lay stumbling blocks before this people, and the fathers and the sons together shall fall upon them; the neighbor and his friend shall perish” Jeremiah 6:19-21.

Will God Answer Prayers for Revival?

“We know that God heareth not sinners: but if any man be a worshiper of God, and doeth His will, him He heareth” John 9:31.

“He that turneth away his ear from hearing the law, even his prayer shall be abomination.” Proverbs 28:9.

God tells us that prayers and sacrifices and offerings are not accepted as long as His people disregard the moral principles of His law. This is the very controversy that God had with ancient Israel. In fact, God will not hear people who continue to disregard the system of values found in the Bible, namely the 10 Commandments:

“Will ye steal, murder, and commit adultery, and swear falsely, and burn incense unto Baal, and walk after other gods whom ye know not; and come and stand before Me in this house, which is called by My name, and say, We are delivered to do all these abominations? Is this house, which is called by My name, become a den of robbers in your eyes? Behold, even I have seen it, saith the LORD … Therefore pray not thou for this people, neither lift up [a] cry nor prayer for them, neither make intercession to Me: for I will not hear thee” Jeremiah 7:8-11, 16.

As long as the churches continue to teach that God’s law cannot be kept or is no longer binding —He will NOT hear them. God’s Ten Commandment moral law is an immutable standard designed to restrain men and women from indulging in lawlessness, debauchery, immorality and improper conduct. God’s law is a revelation of His divine will and a moral code that tells us right from wrong. It defines what sin is. Here is the reason why peace and happiness is being banished from our world:

“Those who teach the people to regard lightly the commandments of God sow disobedience to reap disobedience. Let the restraint imposed by the divine law be wholly cast aside, and human laws would soon be disregarded. Because God forbids dishonest practices, coveting, lying, and defrauding, men are ready to trample upon His statutes as a hindrance to their worldly prosperity; but the results of banishing these precepts would be such as they do not anticipate. If the law were not binding, why should any fear to transgress? Property would no longer be safe. Men would obtain their neighbor’s possessions by violence, and the strongest would become richest. Life itself would not be respected. The marriage vow would no longer stand as a sacred bulwark to protect the family. He who had the power, would, if he desired, take his neighbor’s wife by violence. The fifth commandment would be set aside with the fourth. Children would not shrink from taking the life of their parents if by so doing they could obtain the desire of their corrupt hearts. The civilized world would become a horde of robbers and assassins; and peace, rest, and happiness would be banished from the earth” (Great Controversy, p. 585).