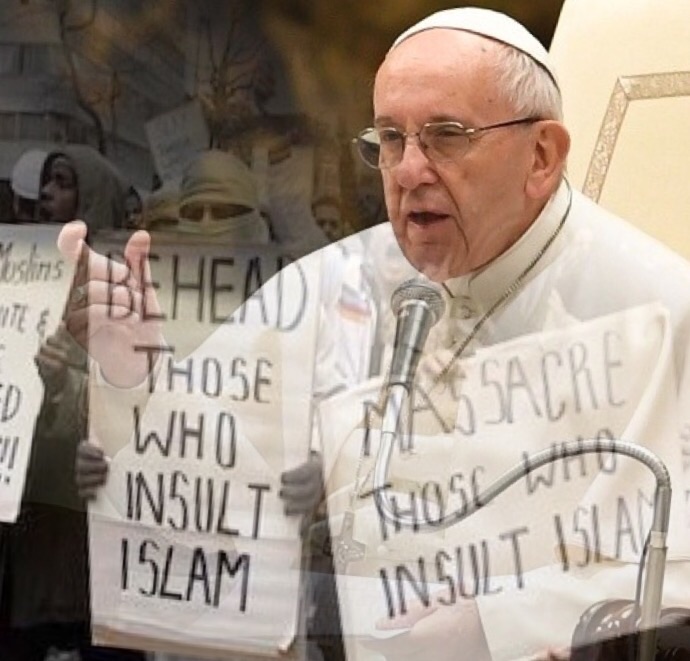 Pope Francis recently denied the existence of Islamic terrorism in a message read during a meeting on Popular Movements in Modesto, CA. These words are an extreme example of where political correctness is taking us and an attempt to shape our thinking that we are not suppose to offend anyone, particularly the Muslim community.

The statement that there is no Muslim terrorism is proof the the Pope is living in a state of denial to reality. How many Christian groups are strapping bombs on their bodies and blowing up other religious groups in acts of suicide? None. How many Jewish groups are doing this? None. How many Islamic groups are involved in these activities and others?

Several, and they are doing it in the name of Allah. Has the Pope ever heard about ISIS, Al-Qaeda, Boko Haram, Hamas, Hezbollah, Islamic Jihad, Muslim Brotherhood, Taliban and many more groups that have been recognized by governments as terrorist organizations. And this very short list represents groups that are trying to implement Sharia law. They are trying to establish a caliphate, Islamic rule, where all people are in submission to Allah. Whenever terror is used as a weapon in the name of a religion, this is the very definition of religious terrorism.

Pope Francis is trying to rewrite history. This is a threat to the very existence of Christianity. The Byzantium Empire, which was the center of Eastern Christianity for 1,000 years, was conquered by the Muslims. This conquest of the East established Rome as the last remaining centers of Christianity and catapulted the bishop of Rome into prominence. The Antioch Bishop, the Alexandrian Bishop and the Constantinople Bishop fell to the the Muslims and left the Bishop of Rome as supreme. Rome knows this and is either trying to rewrite history or he wants to be placed into prominence again.

In fact about 100,000 Christians are being killed for their faith every year by Muslims according to a Pew Research Survey

It is unbelievable that the pope would dishonor the the lives of those who were murdered by Muslim terrorists. Our society is being brained washed with political correctness and this is opening us up for Muslim invaders to come and destroy, not just Christians, but all those who do not worship and bow down to Allah.

At least the ancient Popes did understand the threats of radical Muslim terrorists, and went to war with them in the efforts of protecting the West. This Jesuit Pope would have us kneel and bow before him or before his loving-Muslim terrorist friends. We cannot accept these political correct notions espoused by the Vatican. They are dangerous and will lead to the fall of all of our rights and liberties.