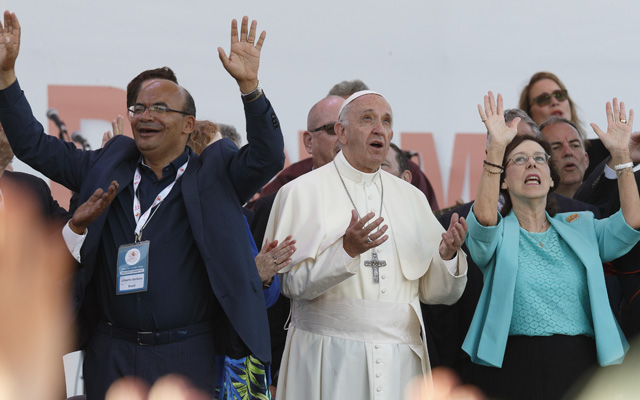 “When Protestantism shall stretch her hand across the gulf to grasp the hand of the Roman power, when she shall reach over the abyss to clasp hands with spiritualism, when, under the influence of this threefold union, our country shall repudiate every principle of its Constitution as a Protestant and republican government and shall make provision for the propagation of papal falsehoods and delusions, then we may know that the time has come for the marvelous working of Satan and that the end is near.” Testimonies, Vol. 5, p. 451.

Pope Francis is bringing these very words to pass and he is trying to unite all the Christian churches into a tongues-speaking Charismatic movement. Francis met with over 60,000 Charismatic Catholics and Protestant worshipers from 120 countries as they sang, danced and spoke in tongues in a display of unity.

Surrounded by leaders from Protestant churches Pope Francis prayed for “a new effusion of the Spirit” and called for a more closer unity among all the churches.“Christian unity is now more urgent than ever” and needs to “be accomplished in prayer” the Pope said. These are the very scenes predicted over 100 years ago from the book The Great Controversy:

“The Protestants…will be foremost in stretching their hands across the gulf to grasp the hand of spiritualism; they will reach over the abyss to clasp hands with the Roman power; and under the influence of this threefold union, this country will follow in the steps of Rome in trampling on the rights of conscience.” Great Controversy, p. 588.

The Charismatic/Pentecostal movement is not about speaking in other languages. Often found in these spiritualistic exercises is shouting, screaming, rolling on the floor, uncontrollable laughter and making ecstatic utterances that are unintelligible to the listeners. Many of these behaviors are not condoned by the Bible.

Paul tells us ” Thou know how thou should behave thyself in the house of God, which is the Church of the living God the pillar and ground of the Truth” (1 Timothy 3:15). In fact when dealing with the issue of “speaking in tongues” he expressly states that “all things be done decently and according to order” (1 Cor 14:40), which is something that Charismatics totally ignore.

In Acts 2:4, 8 the disciples began speaking in other languages (tongues) and people heard them and understood the messages in their native language. The purpose of this gift was to spread the gospel to those from other nations.

Also here is a major problem with this meeting that the Pope had with all these Charismatic worshippers:

This meeting was not about seeking the Scriptures to find out what is truth. It was not about rejecting false doctrines and coming together in the truth. No. This was all about emotionalism and feelings that is replacing the pure teachings of God’s word. Protestants, Catholics and demon-possessed spiritists were praying for a Spirit; but this was not the Holy Spirit of the Bible.

In pagan worship, voodoo, and spiritualism people who are possessed by a “spirit” (devil) make strange, unintelligent noises. They lose total control and cannot restrain themselves.

“It is true that spiritualism is now changing its form and, veiling some of its more objectionable features, is assuming a Christian form.” Great Controversy, 557.

The Holy Spirit will guide us into all truth. The Holy Spirit will exalt the word of God. He will “reprove” the world of sin (John 16:18) which means that He will not overlook all these extra-Biblical manifestations taking place in these events. And most importantly, Acts 5:32 says that the Holy Spirit is given only to those who “obey” Him – given to those obey the truth in God’s word.

Beware of the counterfeit spirit. The Bible warns us of this very thing:

God help us to discern the true Spirit from the false.

“Beloved, believe not every spirit, but try the spirits whether they are of God: because many false prophets are gone out into the world.” 1 John 4:1.