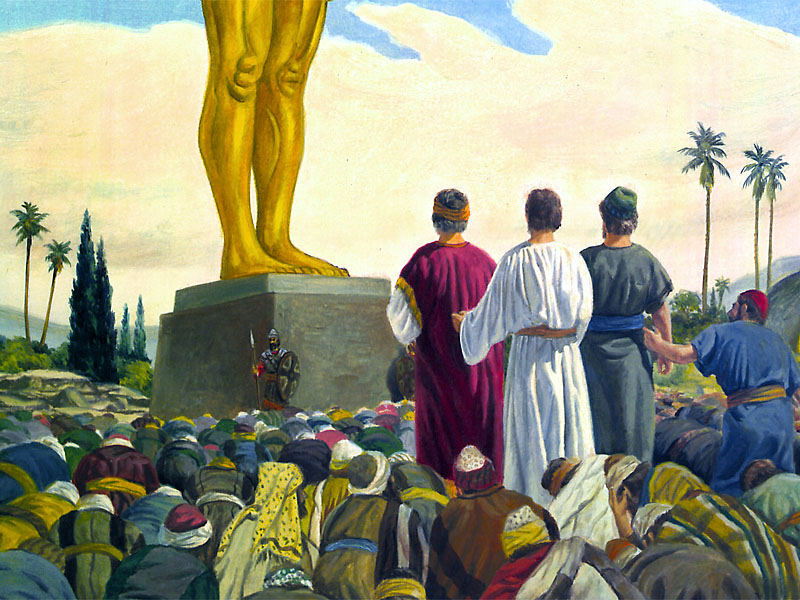 Only three young men stood up against the power and might of ancient Babylon. Only three lonely individuals were willing to take a stand by refusing to be silent. While thousands of Jews who outwardly professed to be God’s people bowed before the image of King Nebuchadnezzar, only three young men remained faithful by standing up for God. Only three brave men spoke the words of truth to Nebuchadnezzar and to all the representatives of the nation (Daniel 3:2), while the rest of the Jews willingly bowed in submission to the Babylonian King. Praise God for these faithful sentinels who said:

“Our God whom we serve is able to deliver us from the burning fiery furnace, and he will deliver us out of thine hand, O king. But if not, be it known unto thee, O king, that we will not serve thy gods, nor worship the golden image which thou hast set up.” Daniel 3:17, 18.

And just like in ancient times, so it is today, the majority of God’s people stand silent and afraid. In the face of Babylon’s relentless onslaught, many are growing timid and indifferent. The message and movement that we love, is fighting for its life – not against the literal armies of a foreign nation, but “against principalities, against powers, against the rulers of the darkness of this world, against spiritual wickedness in high places” (Ephesians 6:12).

We are talking about a solemn warning that was given to all of our pastors and administrators during the 1940s in Ministry Magazine, an official church publication. This warning placed the ax at the root of the problem regarding our relationship with modern Babylon. This appeal has been completely rejected today. In fact, we are doing the exact opposite. By rejecting this warning, we become responsible for inviting chaos and disaster into our ranks. Rome’s ecumenical movement is destroying our historic mission as many of our pastors and leaders attend Babylonian seminaries in order to obtain doctorates and degrees of divinity. This is a betrayal to our sacred trusts. Notice what Ministry Magazine published in 1944 (76 years ago) about this very thing:

“How dare a man contemplate, or have the temerity to present, the degree of doc­tor of divinity, gained in the universities of Babylon, as a credential for teaching or preach­ing this threefold message, the second stipula­tion of which is, ‘Babylon is fallen, is fallen…. Come out of her, My people.’ How dare we accept such a Babylonian credential in lieu of mastery of the truth? Shall a man go into Babylon to gain strength and wisdom to call men out of Babylon? To ask the question is but to disclose how far some have compromised with Babylon, as they have gone back to Babylon to drink from her wells of wisdom. Oh, for the living waters of truth fresh from the Word!” [1]

“Someone needs to sound an alarm. We need to grip ourselves and halt a growing trend that, if it becomes entrenched, will bring disaster through neutralizing our message. We need to give ourselves to the study of the Word until we are again known pre-eminently for our mastery and sound exposition of Scripture. Otherwise we shall go the way of all other religious bodies before us, who started out with a heavenly message, but who have bogged down in the morass of worldly scholarship with its erudite haziness, its loss of spiritual vision, and its blurring of truth, until its virility and its power to witness have virtually disappeared. We must not lose the very heart of our message to the world. We who proclaim it to others must not violate its mandate that we may be better prepared to announce the theory to others.” [1]

“Pray tell: Just how can we expect to get actual light on God’s divine message for today from men steeped in the Sunday-sabbath concept, committed to the natural immortality of the soul theory, ensnared by the evolution hypothesis, antagonistic toward the sanctuary and judgment-hour truths, deny­ing the principle of the historical interpretation of the prophecies, scoffing at the year-day prin­ciple, repudiating the Spirit of prophecy and its inspired guidance for study and research, and scoffing at the supreme truths of the imminent second premillennial advent of Christ?” [1]

This is what we used to believe. This is what we used to preach. This is how we used to feel. What has changed? We ignored this warning. Today we have leaders in the highest positions in the church who are currently earning their theological degrees from Roman Catholic seminaries. [2] Catholic education comes straight from the Vatican, not the Bible. Rome teaches that we must obey tradition or the words of men, both living and dead, who claim superiority over the Bible.

In order to receive a Catholic education, one must be in a Catholic setting, and it naturally follows that a Catholic environment leads to Catholic principles, Catholic thinking and Catholic values. To be in a Catholic seminary you must accept Catholic dogma. You must acknowledge Rome’s claim to authority in spiritual matters. You must be humble and obedient to your Catholic fathers and educators. You must accept the judgment of Rome and the guidance of Rome. For Seventh-day Adventists who no longer believe in the inerrancy and infallibility of God’s word, that would be easy to do. The next obvious step for them would be to embrace Rome. Unfortunately, this is happening.

But for Seventh-day Adventists who still regard the Bible as the infallible and inerrant word of God, the issue is different. We cannot obey the faulty human reasonings of sinful man above the Holy Scriptures. We cannot go into Babylon and bring back her erroneous teachings and begin spreading them throughout Adventism. We cannot become Rome’s puppets to accomplish her purposes by compelling others to pay homage and honor to her.

“Jesus followed the divine plan of education. The schools of His time, with their magnifying of things small and their belittling of things great, He did not seek. His education was gained directly from the heaven-appointed sources; from useful work, from the study of the Scriptures and of nature, and from the experiences of life—God’s lessonbooks, full of instruction to all who bring to them the willing hand, the seeing eye and the understanding heart” (Education, p. 77).

Jesus did not go to the University of the Roman Empire or to the great learning centers of His day. He utilized “heaven-appointed sources” that were not found in Babylon. If God had approved the sending of His prophets and priests to Babylon for their education, He would NOT have opened the schools of the prophets for His servants. John the Baptist, Jesus, Moses and all the prophets were sent into the desert to be taught by God. Why? Because true education prepares you for eternity. Babylon prepares you for this world by teaching the philosophies of ecumenism, liberation theology (social justice), socialism, gender theory, the LGBT+ agenda, environmentalism and other left-wing ideologies.

Again, this is what many of our pastors are echoing. These are the new teachings, discourses and dissertations that modern thinkers are flooding the church with. We are beating a hasty retreat from the church’s original mission while new appalling liberal ideas are replacing our historic faith. This is not Adventism; this is Romanism. Today, Seventh-day Adventists are hard at work, partnering with other secular and radical groups – bringing them together to enact social change and working to help pass legislation on issues pertaining to equality and civil rights. While political organizing and social activism have trumped the preaching of the Third Angel’s Message, our people are becoming secular humanists.

God’s solution for Babylon and her wine (doctrines and policies) has not changed. Charles Fitch, a Millerite preacher, said it best in his call to the Christian churches. Fitch was the first person to apply the term “Babylon” to both Rome and the fallen Protestant churches in 1843. May these words reverberate in Adventist pulpits around the world because in times of great crisis there have always appeared preachers of righteousness who did not hesitate to proclaim the pure word of God:

“But I do say, if you are a Christian, come out of Babylon! If you intend to be found a Christian when Christ appears, come out of Babylon, and come out Now! Throw away that miserable medley of ridiculous spiritualizing nonsense with which multitudes have so long been making the word of God of none effect, and dare to believe the Bible. It contains the wisdom of the infinite God as it is, and needs no alterations and emendations from men, as though they could tell what God means, better than He has been able to express it in his own language.” (Charles Fitch, Millerite preacher, 1843 “Come Out of Her My People”). [3]