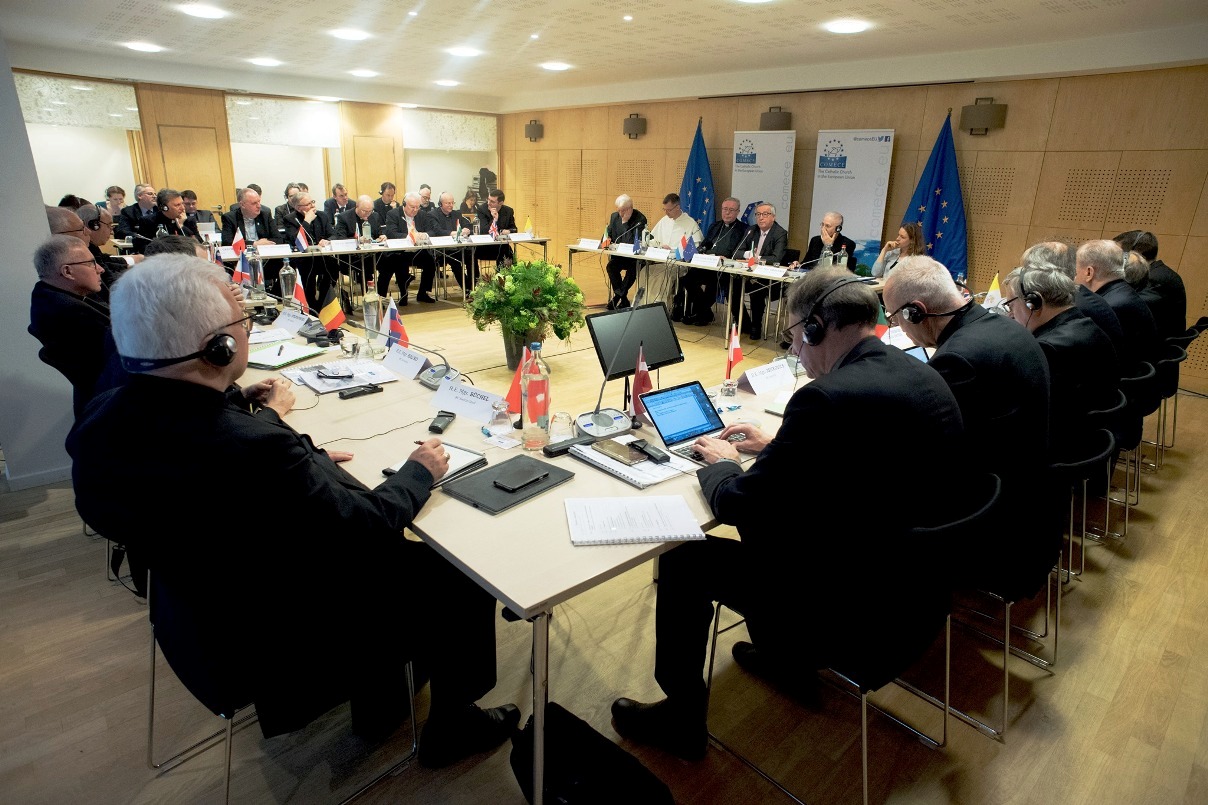 The Commission of the Bishops’ Conferences of the European Community (COMECE).

On May 28, 2020, the Roman Catholic Bishops’ Conference for the European Community (COMECE) and its partners have just published their plan for the European Union. This comes on the fifth anniversary of Pope Francis’ encyclical on climate change called Laudato Si’. The “3rd European Day of Reflection of Laudato Si” was celebrated yesterday and this year’s theme was: “How the Encyclical Laudato Si’ can steer the EU’s role in a just recovery after the Covid-19 crisis.”

This news was published both by the Vatican [1] and by the Roman Catholic Bishops working in the EU. [2] This event was organized by the following six Roman Catholic organizations and each of their names appear in the report. [2]

1. The Commission of the Bishops’ Conferences of the European Community (COMECE). This organization is an association of the Roman Catholic Church and represents Rome’s interests at the 27-nation European Union. [3]

2. The Council of Bishops’ Conferences of Europe (CCEE). This organization is also an association of the Roman Catholic Church and represents Rome’s interests throughout the 45 countries of the European continent. [4]

3. International Cooperation for Development and Solidarity (CIDSE). This is an international family of Catholic social justice organizations working to promote climate change in 120 countries and territories. [5] [6]

4. Global Catholic Climate Movement (GCCM). This is a network of over 900 Catholic organizations [7] working to promote the Pope’s climate change encyclical. In fact, the founding document for this organization is Laudato Si’. [8]

5. Jesuit European Social Center (JESC). This is the Jesuit Order in Europe that is promoting Laudato Si’ as “a vision for the future of humanity on this earth.” [9] Jesuits are also the main advocates of ecumenism, Eastern philosophies, the worship of Mother Earth and the Pope’s green Sunday law encyclical – Laudato Si. [10]

6. Justice & Peace Europe (JUSPAX). This organization is dedicated to raising awareness of Catholic social doctrine in European societies and among European institutions. [11]

Rome has everything covered in Europe. Her leaders have been very active and busy. Laudato Si’ is being vigorously promoted as the Catholic Bishops of Rome are appealing to European leaders to take action NOW! They are asking politicians across Europe and especially in the EU to implement Laudato Si’ as the solution to the COVID-19 crisis! They are trying to create a common home for all of humanity based on Pope Francis’ climate change agenda.

They only speak of an ecological conversion, but they’re silent about the great moral sins of the age: atheism, relativism, apostasy, heresy, debauchery, abortion, feminism, euthanasia and the LGBT+ movement. Why is that? They don’t want to lose the prestige of the world or the applause of men. They would rather offend the God of heaven than to lose their exalted position in this world:

All six of the Roman Catholic entities listed above have come together on the fifth anniversary of Laudato Si’ for one purpose – to implement Pope Francis’ climate change encyclical which calls (through stealth) for Sunday to be the law of weekly rest in order to save the environment. These Sunday law agitators are campaigning to stop the so called desecration of the environment. The climate change issue has become part of an international campaign in Europe. Rome is pleased with all the attention her Sunday doctrine is receiving. They are laying down the groundwork for the future, final crisis.

Where are the commandment-keeping people at this very time? Where are those who will stand up in defense of religious liberty? Unfortunately, in the end only a small minority will oppose the green Sunday law measure. Only a few will speak up in defense of truth.

We are seeing with our eyes world events that our Seventh-day Adventist pioneers wish they could have seen. We are witnessing prophetic fulfillments that all the ancient prophets hoped they could have lived to see. They only saw a shadow of what we are seeing today. However, what little they saw was enough to keep them faithful to their work. What about us? Praise the Lord that not everyone will remain silent:

“By thousands of voices, all over the earth, the warning will be given” (Great Controversy, p. 612).