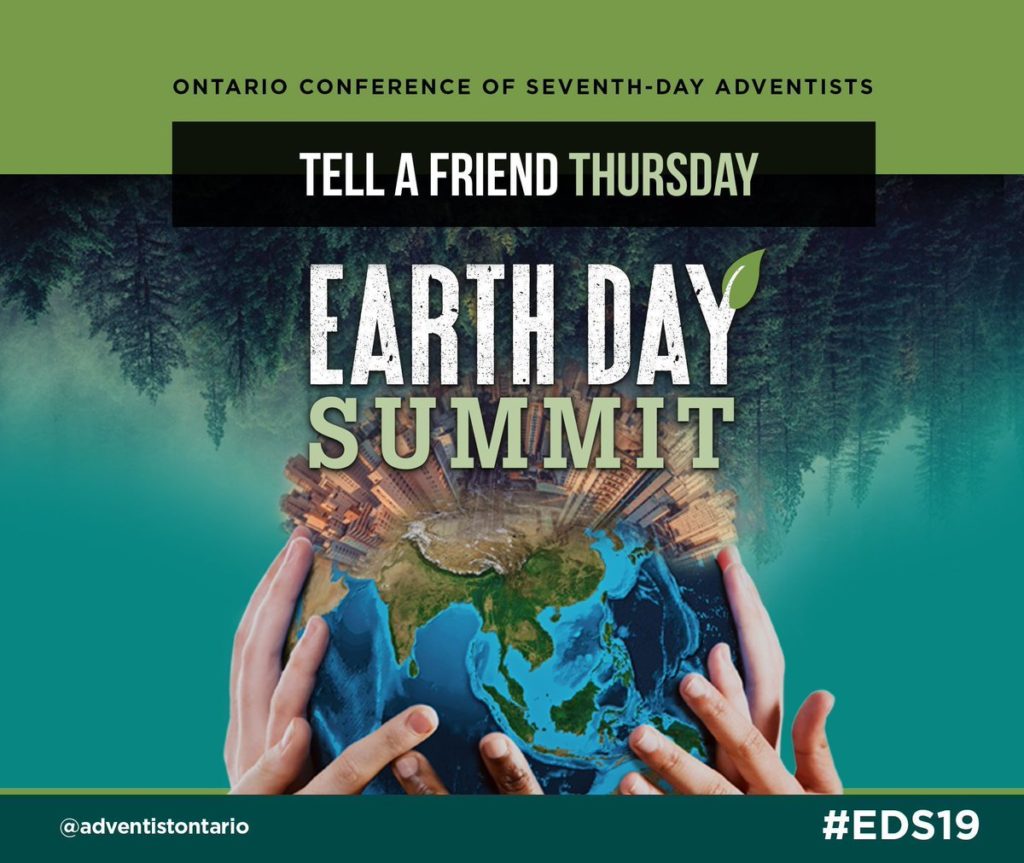 Earth Day is a world-wide, environmental movement celebrated by 1 billion people. Religionists, agnostics, atheists, spiritualists and people from every walk of life are partnering together to save the earth. More than 75,000 organizations, including the Vatican, in 195 countries are working to create a just, sustainable “environmental democracy.” [1] Created 50 years ago, Earth Day is celebrated every 22 of April as the birth of the modern environmental movement.

Seventh-day Adventists have gone all-in for saving the planet by organizing their first ever “Earth Day Summit 2019” in Ontario, Canada to coincide with the global Earth Day movement. The event was hosted by the Ontario Conference of Seventh-day Adventists and they brought together scientists, educators, pastors and church administrators to advocate and educate for earth/environment related issues. [2]

When Seventh-day Adventists neglect their primary objective for existing – preparing people for Christ’s soon return – they will eventually replace their purpose for something else. When our people choose not to focus on the historic mission of spreading the Three Angels’ Message, they will begin embracing everything and anything – including eco justice, green spirituality, climate religion, global warming, environmentalism, Mother Earth, Gaia worship, pantheism, the new age, moon goddesses, moon bats, moonbeams or tree hugging – call it what you want but it has made its way into the Seventh-day Adventist Church.

This certainly has become the case today. The ancient, primitive, jungle goddess called Mother Earth is being reintroduced to our people. Most non-Jewish, 1st Century Christians came out of paganism. They left their pagan, pantheistic gods and embraced the glorious truths of the gospel. But now some are wanting to take us back to paganism and back into the jungle with the new “save Mother Earth” climate agenda.

Many churches have embraced the radical environment madness, which is, to put it nicely, a holy crusade based on bogus science, political agendas, and fear mongering. Radical environmentalism is joined by the hip to feminism, and feminism is joined to LGBT-ism. These three ideologies are the product of the liberal left’s social reengineering program for the world.

To understand what’s really happening we must look no further to Rome [3] and to the United Nations. They are the architects who push for earth worship, green Sunday laws and a one-world, ecumenical religion that embraces everyone into one big happy family. Green earth activists have been crusading for laws that would give the planet (Mother Earth) the same rights as humans, if not more. And is it just a coincidence that green Sunday laws are also being agitated? [3]

There’s nothing wrong with being good stewards of God’s creation, but saving the planet is not the new morality. The real issues facing our world is the disintegration of God’s moral, 10 Commandment law. The slaughter of the unborn, the destruction of the one man and one woman marriage arrangement, the reversal of the gender roles by a godless society and the collapse of the family – these are defacing the image of God and corrupting the principle of His moral law.

When will Seventh-day Adventists hold a summit for these important moral issues? They do it for the global warming hysteria but not for the real moral issues that will bring down God’s judgments upon the earth? Sadly, most Seventh-day Adventist just don’t care about ending abortion or about ending the sustained attack against the family by LGBT+ activists. No. They’re too busy joining the world to advocate for climate change and green justice.

According to the world, the great moral issues today are not the 10 Commandments, the judgment work in heaven or the Second Coming of Jesus. It’s the environment, pollution and eco justice. The new morality removes the emphasis of sin and obedience and shifts the burden to political activism, social organizing and building bridges with the Vatican, the United Nations and other organizations across denominational lines who share these same interests. [4]

The never ending struggle for eco justice will certainly trump the preaching of the Three Angels’ Message. Instead of preparing people for the coming of Christ so that they can be ready in that day, we are busy trying to create the perfect environmental utopian society for the coming New World Order.