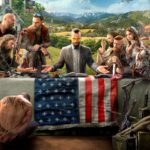 Soon it will be open season for killing fundamental Christians according to a new video game called “Far Cry 5.” The game is being released by Ubisoft and tells the story of a gun-toting, militant, Bible-believing Christian community that is trying to take over Hope County, a fictitious location in Montana. Christians are being stereotyped […]