Here is President Ted Wilson’s speech in its entirety when he addressed a multi-faith gathering of Muslims, Pentecostals, Lutherans Orthodox and Roman Catholics. This speech took place during a celebration commemorating the 500th Anniversary of the Protestant Reformation on October 31, 2017 (See all the pictures below). Pope Francis also sent his representative who not only delivered the Pope’s message but who was also present during Ted Wilson’s speech.

One would expect Seventh-day Adventists, on such a historic event as this, to espouse the prophetic views of the end-times in public before this vast ecumenical, interfaith assembly. But this did not happen. If you read the official church report from the denomination, you would think that Ted Wilson preached the Three Angles’ Message to this ecumenical gathering. Adventist News Network reported:

“Wilson also emphasized practical Christianity and the three angels’ messages in his remarks at a Moscow forum commemorating the 500th anniversary of Martin Luther’s nailing of the 95 theses to a church door in Germany.” Source

We are making President Wilson’s speech available so that you can judge for yourself. Ted Wilson has given very powerful speeches and warning messages in the past. Sadly, this is not one of them. This message could be preached in all the churches of Babylon with no problem. This was not a “Reformation” moment similar to the one that Luther experienced. Luther was excommunicated when he stood up the the false teachings of his day. He did not received applause and praise from Babylon, as Ted Wilson did at the end of his speech. It is a moral failure on our part to keep silent when we should be engaging people with truth, by pointing out the dangers of the great lawless system of prophecy that is seeking to deceive the whole world. That’s what Martin Luther did 500 years ago.

Simply “mentioning” the Three Angels is not the same as “preaching” about them. Paul actually declared the gospel (1 Corinthians 15: 1-4). He didn’t just “mention” to people that there was a gospel. Also in Acts 17:23-31, Paul clearly lets the Greeks know who the true God is when he saw their altar dedicated to an “unknown” god. He didn’t simply mention that there was a true God, he declared to them Who that God was and called them to repentance.

Sharing the Three Angels’ Message involves letting people know about worshiping God as Creator by keeping his seventh-day Sabbath (First Angel’s Message); calling people out of the ecumenical, Babylonian family (Second Angel’s Message); and warning people about the dangers of Sunday-keeping when it is enforced by law (Third Angel’s Message). This is the warning that God expects His Elijah messengers to give (Malachi 4:5).

To keep silent or to leave people in the dark especially as Rome is gathering all the churches into one body and as prophecy is leaping out of the book or Revelation before our very eyes – will result in the loss of souls, including our own (Ezekiel 3:17, 18). Yes, we must treat all people with respect and dignity and be kind and courteous, but having a true love for others will compel us to proclaim the truth to them as well. No more ecumenical soft-peddling with “MYSTERY, BABYLON THE GREAT, THE MOTHER OF HARLOTS AND ABOMINATIONS OF THE EARTH.” Revelation 17:5.

“Are we to wait until the fulfillment of the prophecies of the end before we say anything concerning them? Of what value will our words be then? Shall we wait until God’s judgments fall upon the transgressor before we tell him how to avoid them? Where is our faith in the word of God?” (Testimonies, 9:20).

Below are photos from the celebration that took place on the 500th Anniversary of the Protestant Reformation.

The celebration of the 500th Anniversary of the Reformation attended by Seventh-day Adventists took place in the Cultural and Exhibition Complex “Pashkov House” in Moscow, Russia. 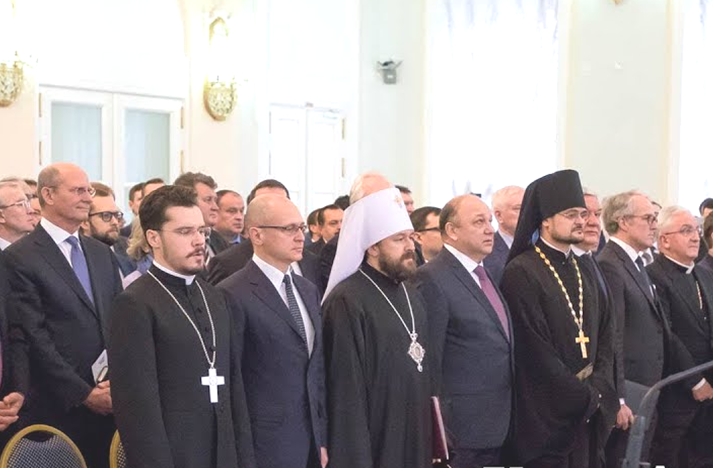 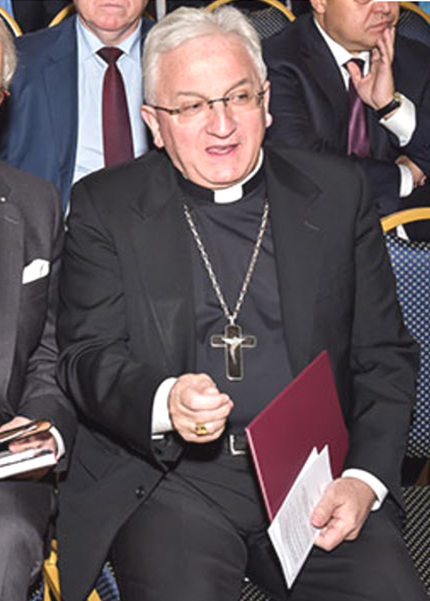 Representing Pope Francis for this celebration of the 500th year anniversary of the Protestant Reformation was the Roman Catholic Papal Envoy and Archbishop Celestino Migliore. 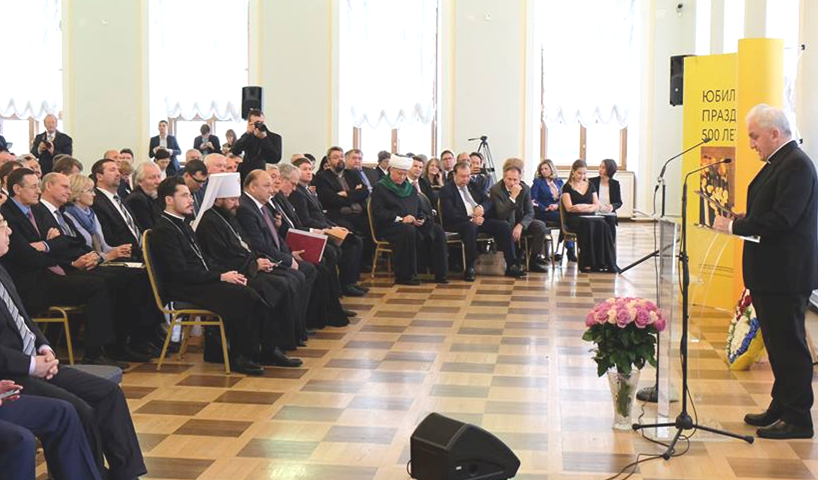 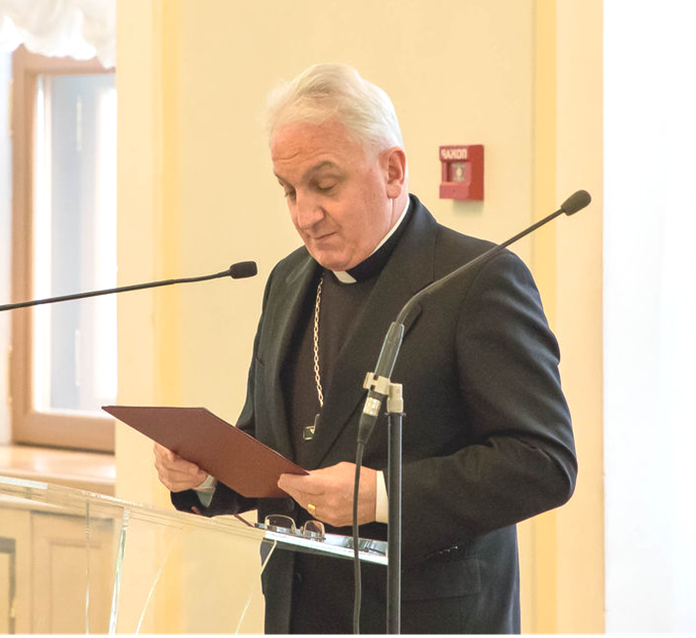 The Pope’s message being delivered to the multi-faith assembly. 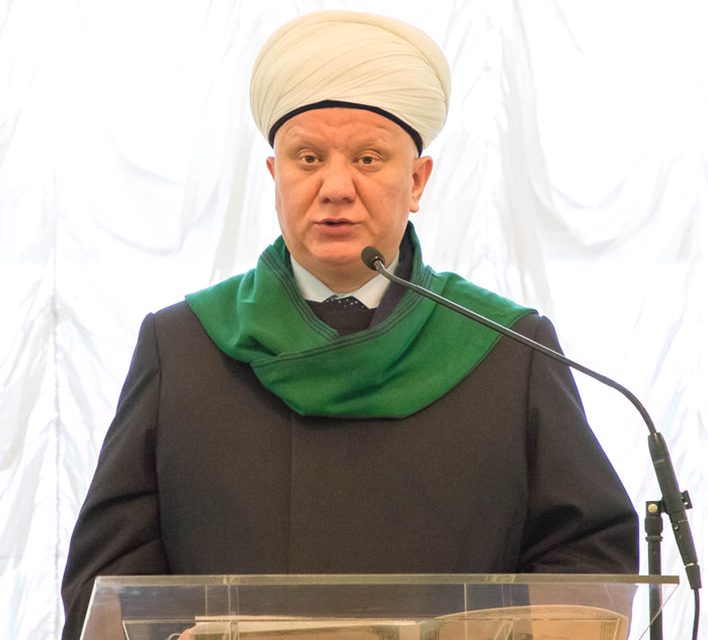 Russian Muslims was represented by Albir Hazrat Krganov, chairman of the Central Spiritual Administration of the Muslims of Moscow. 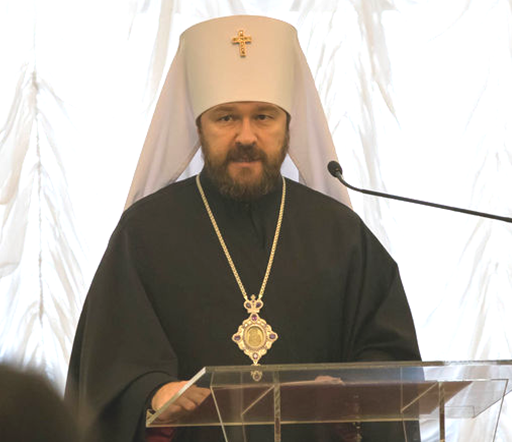 The Orthodox Church was represented by Bishop Hilarion Alfeyev, chairman of the Department of External Church Relations of the Holy Synod of Moscow. 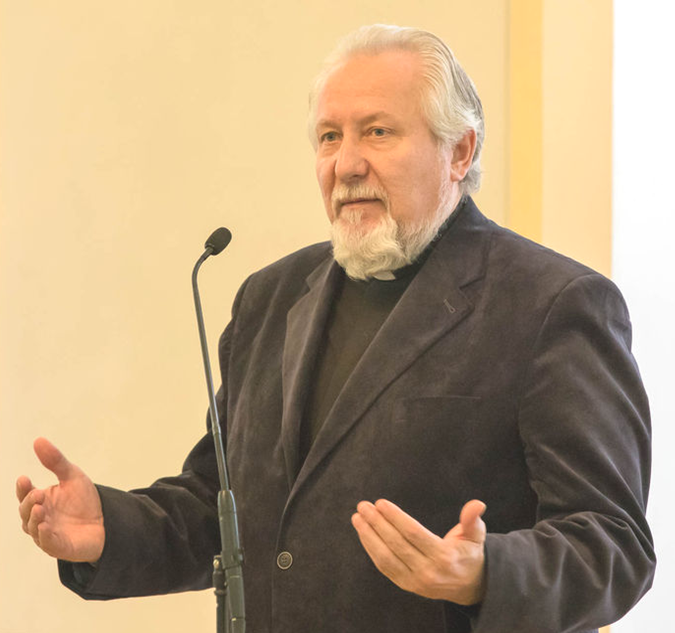 The Pentecostals were represented by Sergey Ryakhovsky, head bishop of the Russian Union of Christians of the Faith of the Pentecostals. 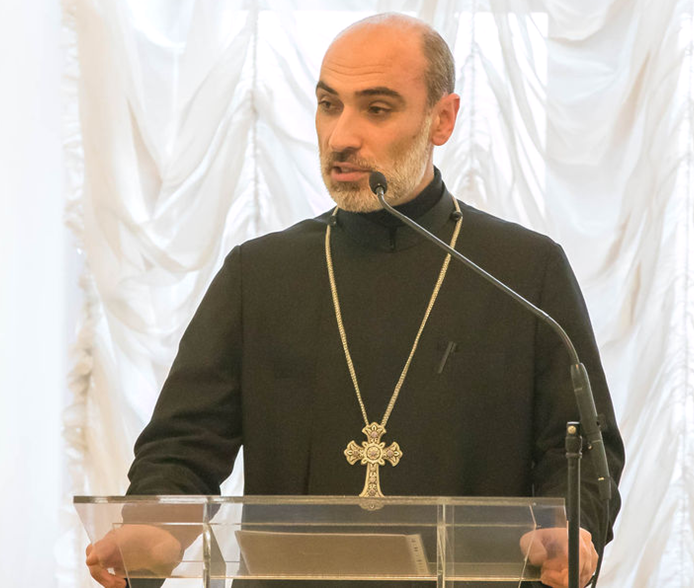 The Armenian Apostolic Church was represented by Priest George Vardanyan from the Russian and Novo-Nakhichevan Diocese. 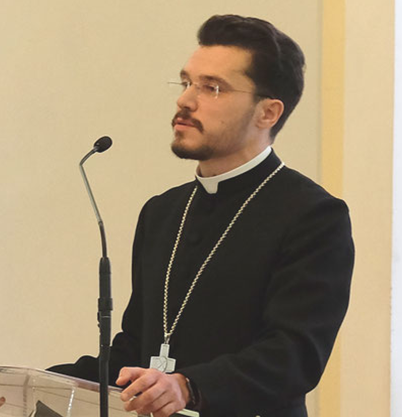 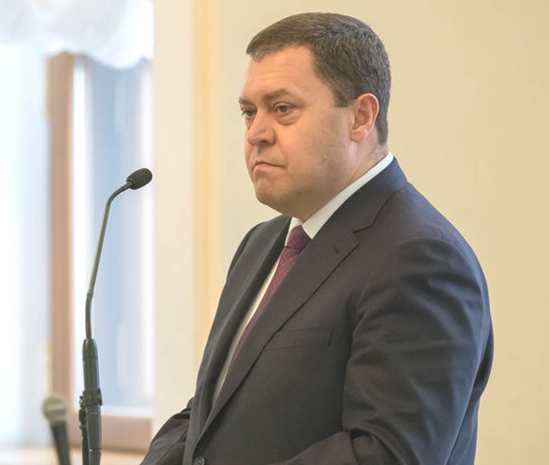 The Evangelicals were represented by Eduard Grabovenko, Head Bishop of the Russian Church of Christians of Evangelical Faith. 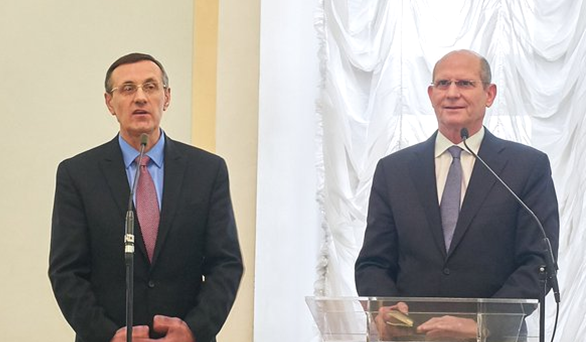 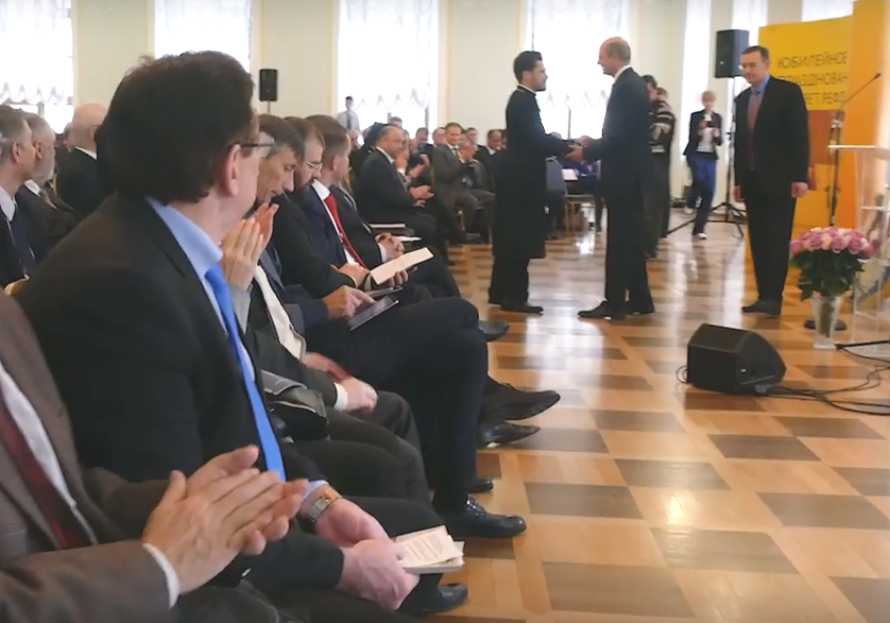 Ted Wilson gets applause and praise from the ecumenical audience after his brief speech. 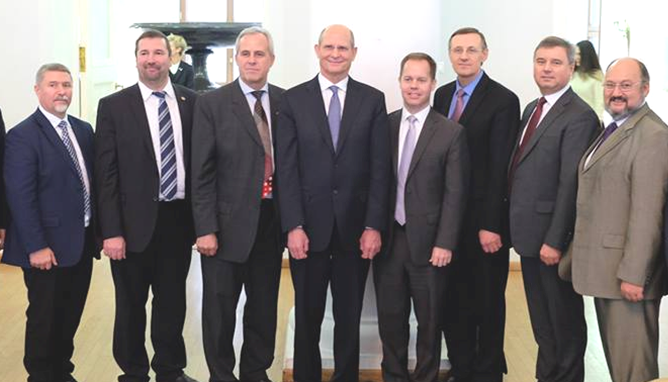 Ted Wilson with the SDA delegation that attended the ecumenical event commemorating the 500th Anniversary of the Protestant Reformation. 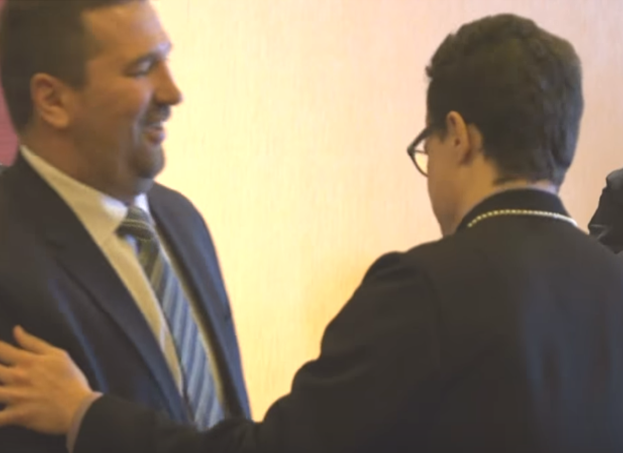 Left: Oleg Goncharov, director of the Religious Liberty Department for the Euro-Asian Division of Seventh-day Adventist Church with an agent of Rome. 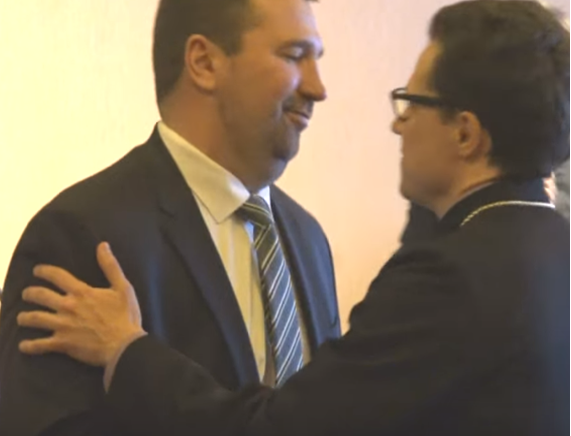 Religious liberty is hard at work. 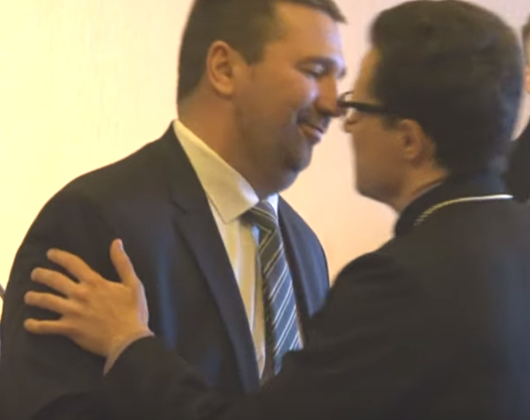 “With her much fair speech” and “flattering of her lips she forced him.” Proverbs 7:21. 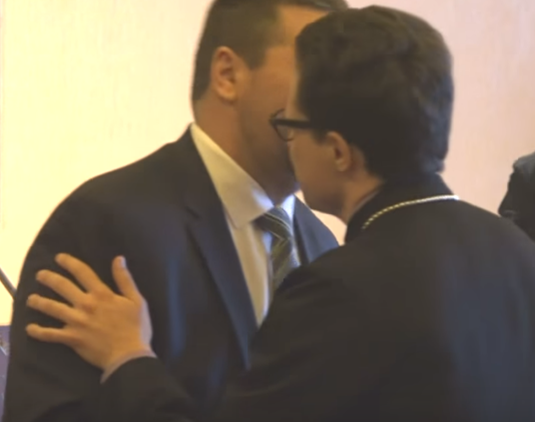 Kiss the Reformation goodbye: “The kisses of an enemy are deceitful.” Proverbs 27:6. 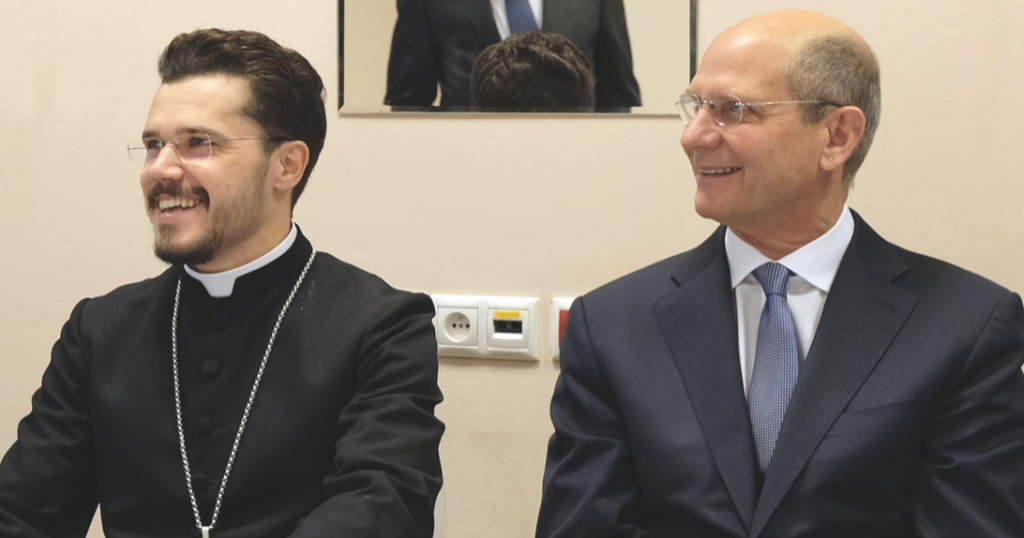 President Ted Wilson (right) and the ecumenical participants are happy.

A view of the ecumenical round-table. 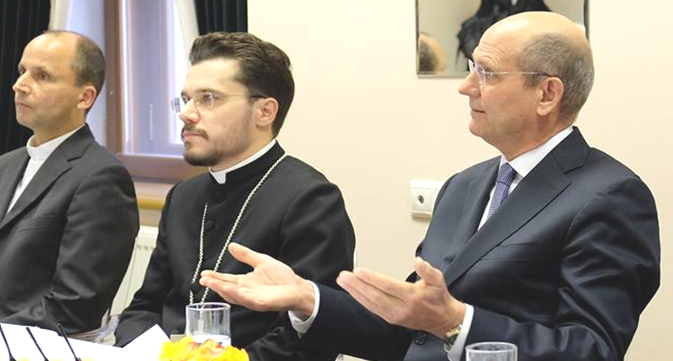 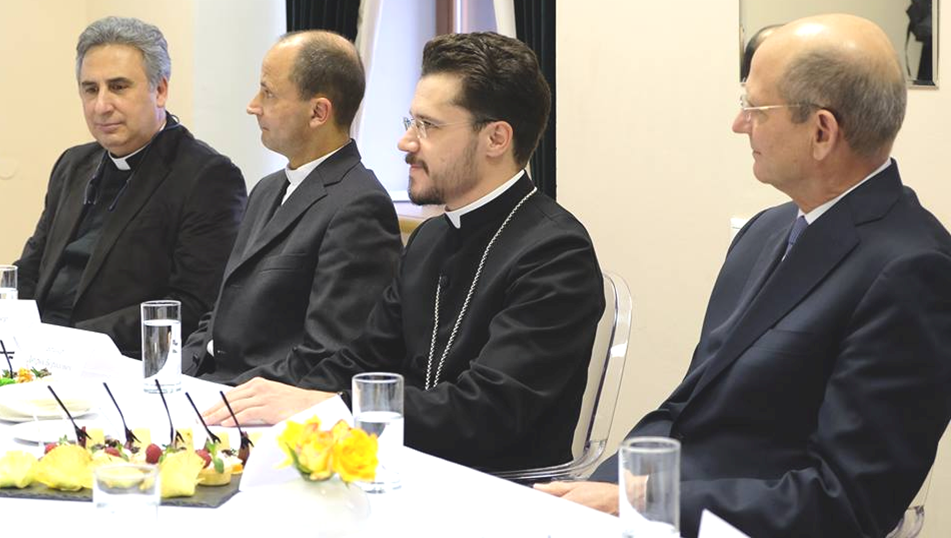 Eating with Catholics and Evangelicals. 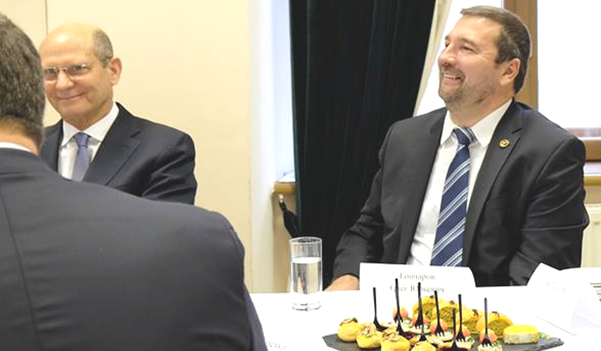 President Wilson (left) with Oleg Goncharov (right, the kisser) director of Religious Liberty for the Euro-Asian Division are enjoying this event.

Here is the danger and prohibition against attending these interfaith gatherings:

“As the storm approaches, a large class who have professed faith in the third angel’s message, but have not been sanctified through obedience to the truth, abandon their position, and join the ranks of the opposition. By uniting with the world and partaking of its spirit [ecumenism], they have come to view matters in nearly the same light; and when the test is brought, they are prepared to choose the easy, popular side” (Great Controversy, p. 608).

“It was by associating with idolaters and joining in their festivities that the Hebrews were led to transgress God’s law and bring His judgments upon the nation. So now it is by leading the followers of Christ to associate with the ungodly and unite in their amusements that Satan is most successful in alluring them into sin. ‘Come out from among them, and be ye separate, saith the Lord, and touch not the unclean.’ 2 Corinthians 6:17. God requires of His people now as great a distinction from the world, in customs, habits, and principles, as He required of Israel anciently” (Patriarchs and Prophets, p. 458).