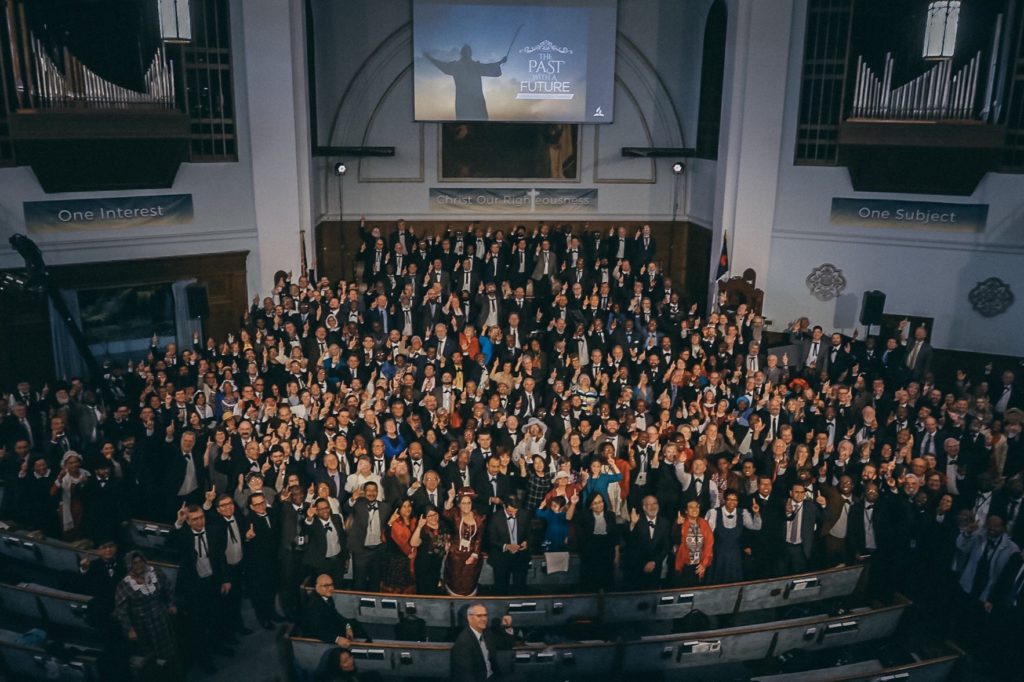 On Sunday afternoon, October 14, 2018 during the 2:00 p.m. business meeting at the 2018 General Conference Annual Council in Battle Creek, Michigan, the GC Executive Committee began a 5 1/2 hour discussion on the issue of “compliance committees.”

The issues under consideration were simple: Do we implement the rules that were duly voted upon in general session by due process? Or can leaders and members willfully disregard those decision with impunity? Will we follow a representative form of church government, where authority passes from the members and continues up through their elected delegates/officials, or can leaders basically do their own thing by their own authority?

Dan Jackson, President of the North American Division, did his best to try to persuade his colleagues to vote down these compliance committees. These committees, once approved, will be responsible for handing out disciplinary actions. The steps of discipline for non-compliant church members begins first with prayer and counseling, then warnings, followed by public reprimands and finally removal from office.

In the above video Dan Jackson expresses his reasons to vote “no” on the document authorizing compliance committees. He basically said that we all see things differently and no one should be kicked out just because someone has a different perspective on church policy. Many other leaders throughout the world field also expressed Dan Jackson’s concern. However, the majority of General Conference Executive Committee members did not.

Below is one of the best speeches made during the 5 1/2 hour discussions. Harold Butler, a member of the General Conference, had the moral fortitude to speak truth plainly in front of this committee. God bless him and all those who speak out against the popular sins in the church and who sigh and cry for the abominations being done in the land.

Harold Butler was cut off for slightly going over 2 minutes while Dan Jackson spoke for almost 3 minutes uninterrupted. But when you look at the substance of Harold Butler’s speech you will know why they cut him off. He revealed that there are some in the church who are promoting homosexual pastors! This shocking news came from a member of the General Conference. As soon as he began to apply the word of God to certain men sitting in the GC Executive Committee, that’s when he was shut down. They should have let him continue. We need more leaders like Harold Butler who will speak truth in love. Ellen White says that if our leaders would speak truth more often, that we would see more of God’s power among us.

“Words as unmistakably plain as these spoken by Nathan to David are seldom heard in the pulpits of today, seldom seen in the public press. If they were not so rare, we should see more of the power of God revealed among men. The Lord’s messengers should not complain that their efforts are without fruit until they repent of their own love of approbation and their desire to please men, which leads them to suppress truth” (Prophets and Kings 141). 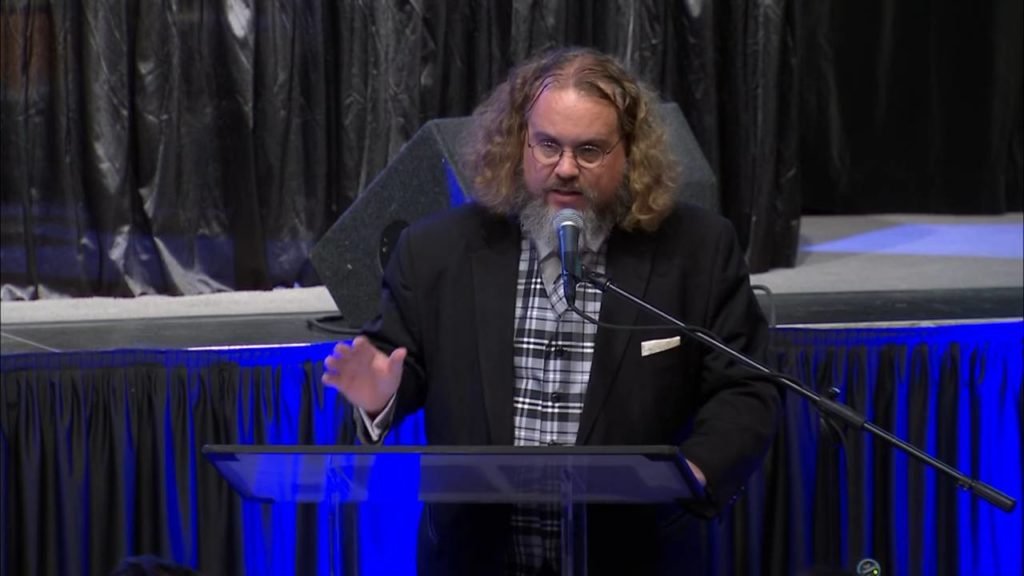 Dr. David Trim is a historian and archivists for the General Conference of Seventh-day Adventists.

A survey was conducted of all 137 Union Conference offices from around the world asking each president to consult with their officers and to answer certain questions based upon the views of the members within their territories. The following results are part of the questions and responses that show that there is a common concern throughout the world church over the issue of non-compliance. Dr. David Trim was responsible for conducting this survey. 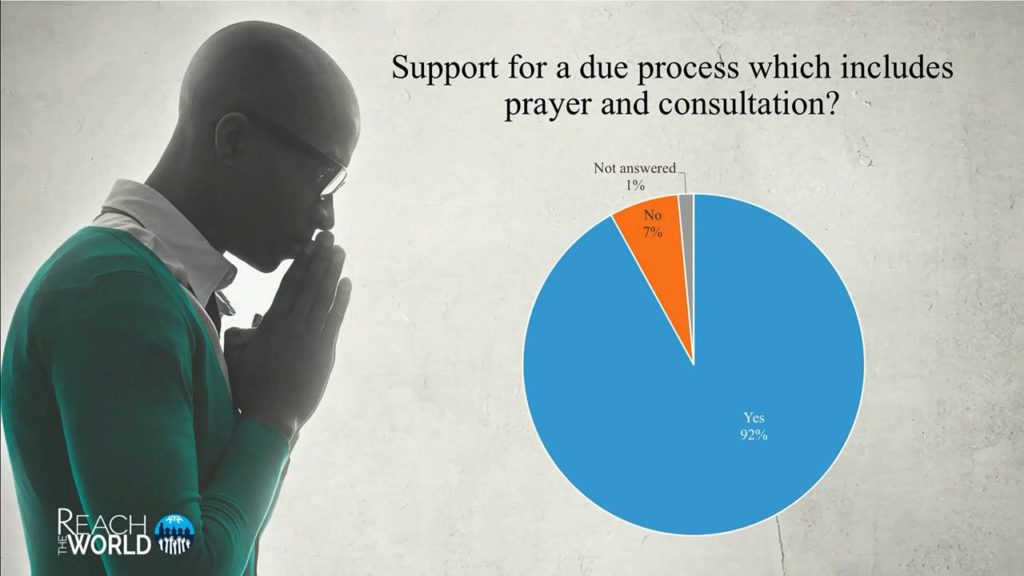 The first question shows that there is an almost unanimous consent throughout the church that some kind of compliance process should be implemented that includes prayer and consultation. 92% voted yes. 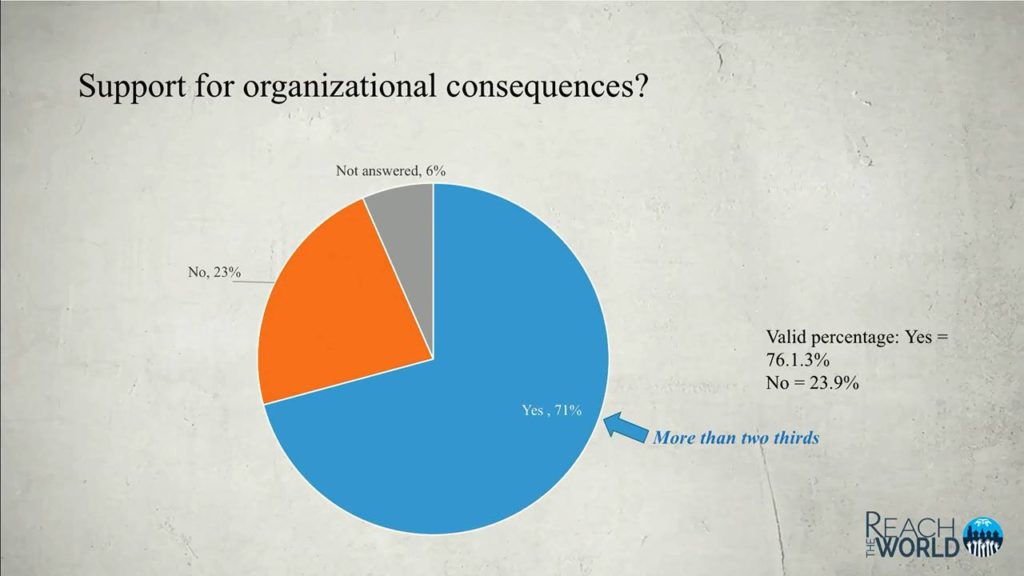 71% voted that there needs to be some kind of consequence implemented against non-compliant leaders when prayer and consultation does not bring unity in the church. 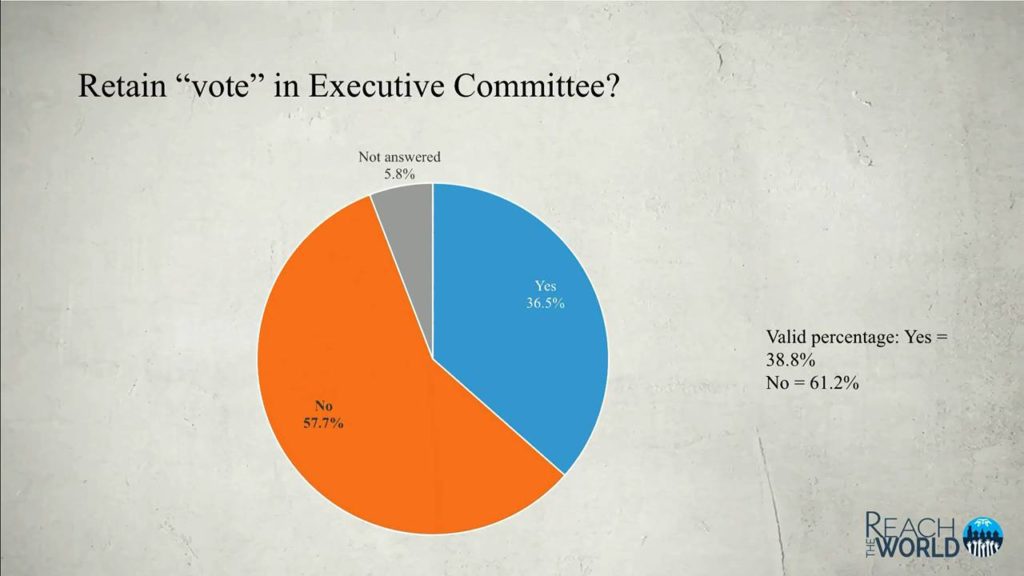 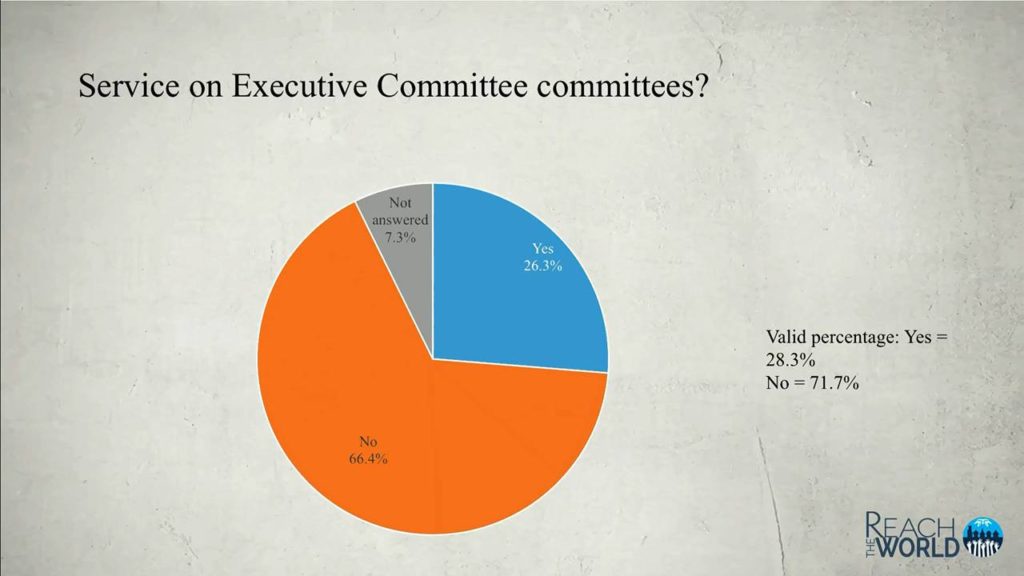 66.4% voted that non-compliant leaders should not even be serving on important church business meetings.

So it appears that this question of bringing compliance within the church is not simply the actions of Ted Wilson or of a few people. World leaders have expressed their views through this survey and there seems to be a consensus that favors compliance. The findings of this survey was read before the GC Executive Committee took up the vote to approve or reject the creation of these compliance committees.

Attorney Karnik Doukmetzian, General Counsel for the Seventh-day Adventist Church, dropped a bomb-shell on the committee. He spoke to the assembly and revealed that 3 different outside law firms were consulted by his office (Office of General Counsel for the General Conference). He said that he sought the legal opinions of experienced attorneys who deal with corporate/church issues. Attorney Karnik Doukmetzian reported that all 3 law firms were unanimous in their opinion that the General Conference Executive Committee has the legal right to sanction and remove any members for noncompliance. He also said that the courts, if necessary, would also uphold the church’s right to sanction or remove any of its officers for reasons defined by the policies and bylaws of the church.

Though not explicitly stated, it appears that this was a warning to any non-compliant conference, union, or division leader against making any drastic moves with regards to the church’s properties, bank accounts or intellectual properties. Why else do you bring in the lawyers to make these “clarifications” at such a high-stakes meeting?

After much discussion from both sides, the issue of “compliance” was finally put to a vote. The vote to create compliance committees was approved 185 yes to 124 no. In the above video you will see President Ted Wilson read off the votes. After telling the committee that the “yes” votes prevailed, President Wilson appealed to everyone to not engage in any vindictiveness but to continue under the control of the Holy Spirit.

That being said, compliance committees at the General Conference level were approved by the 2018 General Conference Annual Council constituency. What does this mean? It means that the “non-compliant” have been put on notice. They have until the Spring of 2019 to evaluate their relationships with the Lord and their future leadership roles within the Seventh-day Adventist Church.

In the video below, President Ted Wilson explains that enforcement procedures and compliance requests will not start until the 2019 General Conference Spring Council. That’s not for another 6 months. Ted Wilson says that this period will give people time to work out their “situations.”

Will these “situations” get worked out during the next 6 months? We certainly hope so; however, we are living in the time of the Omega of Apostasy and a great shaking is coming – which could mean that the Battle at Battle Creek (2018), was only a battle, and not the end of the war.

“Soon the battle will be waged fiercely between those who serve God and those who serve Him not. Soon everything that can be shaken will be shaken, that those things that cannot be shaken may remain” (Testimonies, Vol. 9, pp 15, 16).