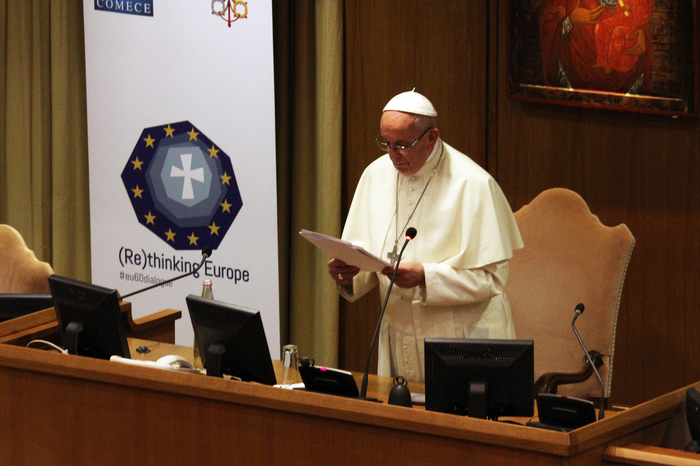 The once powerful Protestant empires of Europe have crumbled under the fervent assault of Rome. Europe’s Protestant past is no more. Europe today resembles the distant, pre-Reformation past when it was ruled by Catholic popes.

We are seeing the final chapter on the Reformation as strange events both in the religious and secular world are unfolding before our eyes. The religious stage is being set. Almost all the churches have united. The Roman Catholic Church apparently has had the most to gain by the atmosphere of ecumenism. The entire world is being wooed to join the great apostate fellowship found in Revelation 13, 17, and 18.

On October 27-29, 2017 over 350 high-level leaders from the Roman Catholic Church and from the European Union came together at the Vatican to participate in a special mass with Pope Francis.

The message from Pope Francis to the political leaders of Europe was aimed at challenging them to maintain the “Church” (Rome) at the heart of “public policy making.”

Pope Francis told the participants that the church has the responsibility of “highlighting” important roles for law makers that could benefit “humanity.”

The 500 years of rich Protestant history has been rejected, cast down, and “trodden under foot” (Daniel 8:14) as political leaders from the different nations of Europe descend to the Vatican to receive the pope. The Protestants of Europe used to reject the Pope’s claims of infallibility and supremacy as blasphemous during the Reformation era. They broke away from Rome because of her false doctrines. And what doctrines have changed in Catholicism since then? None. And even with the scandalous revelations over child abuse, the Pope was still given more than a hero’s welcome—he was welcomed as though he was the divinely appointed ruler representing God. This is papal supremacy!

The Reformation in Europe is officially over as Europe made peace with Rome on the eve of the 500 year anniversary of the Protestant Reformation. In so doing, they neglect the testimony of history and the clear teaching of the Bible.

The Papacy today still claims primacy and universal supremacy as Vicar of Christ on earth! Rome has never repudiated any of her doctrines. This event is a shameful betrayal to the Protestant Reformers and was predicted in Bible prophecy.

One must grasp the magnitude of what is happening before our eyes: the complete surrender of the Protestant Empires of Europe!