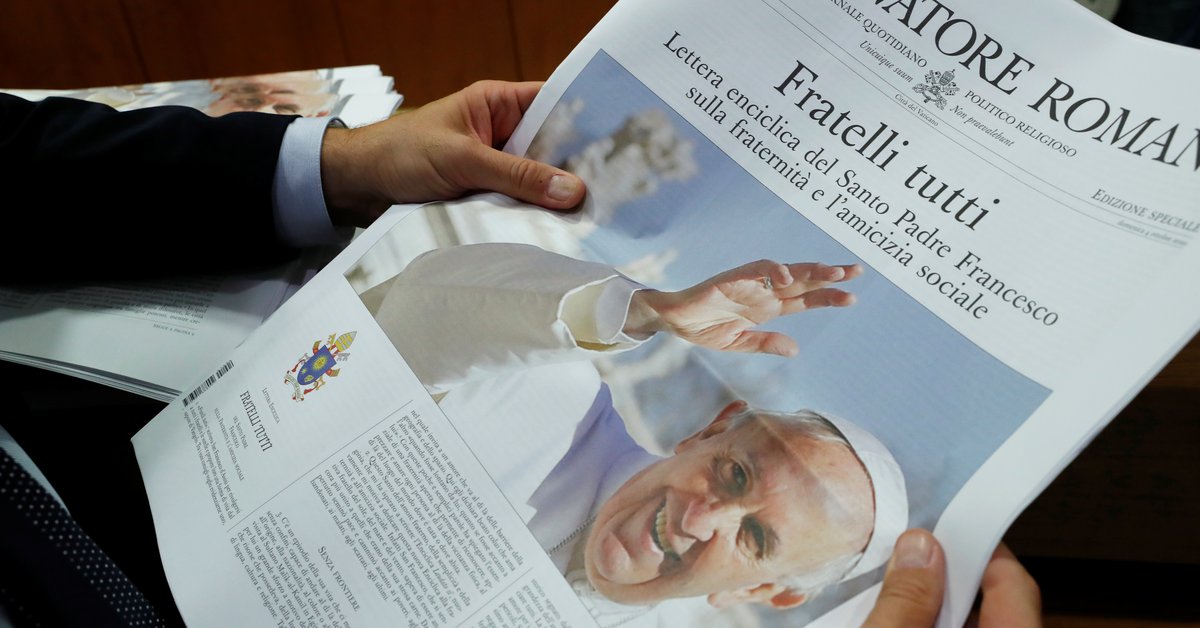 The Vatican has published the third encyclical of Pope Francis called “Fratelli Tutti” (All Brothers). It was signed on October 3, 2020 in Assisi, Italy. The Pope calls for a universal brotherhood to build a better, more just and peaceful world. However, the principles for affirming the universal brotherhood will be based on the pantheistic teaching promoted by Saint Francis of Assisi. The gospel of Christ is not mentioned. The goal is to overcome our differences by affirming the truth that all religions, including atheism and pantheism, are holy and contain truth.

The Vatican has made available the text of Fratelli Tutti [1] and we will examine some of the main points and teachings.

Paragraph #8. “It is my desire that, in this our time, by acknowledging the dignity of each human person, we can contribute to the rebirth of a universal aspiration to fraternity.”

Paragraph #287. “He wanted to be, in the end, “the universal brother” … May God inspire that dream in each one of us. Amen.”

Paragraph #95. “Love also impels us towards universal communion. No one can mature or find fulfillment by withdrawing from others. By its very nature, love calls for growth in openness and the ability to accept others as part of a continuing adventure that makes every periphery converge in a greater sense of mutual belonging. As Jesus told us: “You are all brothers” (Mt 23:8).

Yes, we are all brothers and sisters and equal in the eyes of God, but sin has alienated us from Him (Isaiah 59:2). The mission of the church is to reconcile the “prodigal” sons and daughters and bring them to repentance so that they can be reconciled to God. Only after embracing the Gospel of Christ are we “adopted” back into the heavenly family. It is then that we can call Him, “Abba Father”. (Romans 8:15).

Paragraph #148. “In fact, a healthy openness never threatens one’s own identity. A living culture, enriched by elements from other places, does not import a mere carbon copy of those new elements, but integrates them in its own unique way. The result is a new synthesis that is ultimately beneficial to all, since the original culture itself ends up being nourished. That is why I have urged indigenous peoples to cherish their roots and their ancestral cultures.

Paragraph #220. “Intolerance and lack of respect for indigenous popular cultures is a form of violence grounded in a cold and judgmental way of viewing them. No authentic, profound and enduring change is possible unless it starts from the different cultures, particularly those of the poor. A cultural covenant eschews a monolithic understanding of the identity of a particular place; it entails respect for diversity by offering opportunities for advancement and social integration to all.

Paragraph #34. “If everything is connected, it is hard to imagine that this global disaster is unrelated to our way of approaching reality … the harm we do to nature is itself the punishment for our offences. The world is itself crying out in rebellion.”

The idea that “everything is connected” comes from the same pantheistic teaching of the “circle of life.” It teaches that nature is sacred and divine just like God. Nature gives life and takes life. The title of the encyclical, “Fratelli Tutti” (All Brothers), is the sum of the Pope’s pontificate. This title is being exploited to teach heretical doctrines. How are we supposed to understand the meaning of the gospel that tells us who the true sons and daughters of God are?

The Bible clearly says that we are not all brothers because not all of us have received Christ. Only those who believe in the name of Christ are the children of God. So it seems that this “universal brotherhood” of Muslims, Hindus, Buddhists, Roman Catholics, Protestants and even pantheistic indigenous religions is a non-biblical concept. It contradicts the holy word of God.

Leading men devoid of the knowledge of Scripture are trying to build a universal spiritual brotherhood with conflicting views. No distinction of belief is made when it comes to fraternity. We are all brothers and sisters. It doesn’t matter if you reject Christ or embrace Satan. Who cares if you pray to the spirits of nature. You can deny Christ, His mission, His divine nature and His teachings and we are still one big happy family. According to Pope Francis, we still share one common father.

Paragraph #272. “As believers, we are convinced that, without an openness to the Father of all, there will be no solid and stable reasons for an appeal to fraternity. We are certain that “only with this awareness that we are not orphans, but children, can we live in peace with one another”. For “reason, by itself, is capable of grasping the equality between men and of giving stability to their civic coexistence, but it cannot establish fraternity”.

Paragraph #46. We should also recognize that destructive forms of fanaticism are at times found among religious believers, including Christians; they too “can be caught up in networks of verbal violence through the internet and the various forums of digital communication. Even in Catholic media, limits can be overstepped, defamation and slander can become commonplace, and all ethical standards and respect for the good name of others can be abandoned”. How can this contribute to the fraternity that our common Father asks of us?

A common father? Is God the author of nature worship? Is He the God of paganism? Is He the Author of confusion? Did He have a part in creating the different contradictory belief systems? The Pope says that those who use the Internet to criticize the Universal Brotherhood are disobeying the will of “our common Father.” These are smooth and seductive words wrapped with grave doctrinal error. The Pope’s encyclical is subverting the Christian faith. Such teachings must be rejected by all true believers. Presuming that all religions share a common Father is not only false, it opens the door for Satan to enter the church. The religion of Satan must also be embraced in the Universal Brotherhood.

Paragraph #254. “I ask God to prepare our hearts to encounter our brothers and sisters, so that we may overcome our differences rooted in political thinking, language, culture and religion. Let us ask him to anoint our whole being with the balm of his mercy, which heals the injuries caused by mistakes, misunderstandings and disputes. And let us ask him for the grace to send us forth, in humility and meekness, seeking peace.”

Paragraph #277. “The Church esteems the ways in which God works in other religions, and “rejects nothing of what is true and holy in these religions. She has a high regard for their manner of life and conduct, their precepts and doctrines which… often reflect a ray of that truth which enlightens all men and women.”

Paragraph #281. “A journey of peace is possible between religions. Its point of departure must be God’s way of seeing things. God does not see with his eyes, God sees with his heart. And God’s love is the same for everyone, regardless of religion. Even if they are atheists, his love is the same. When the last day comes, and there is sufficient light to see things as they really are, we are going to find ourselves quite surprised.”

According to the Pope’s encyclical, all religions are worthy of praise, including the faith of atheism. Since we will all be together in heaven, let’s unite here. The plan is to “overcome our differences” in “religion.” Why? Because God works in all belief systems. According to Pope Francis, there is something sacred in every religion.

To have this opinion and to promote it is to basically abandon the true Christian faith. The Pope’s encyclical basically elevates Krishna, Buddha, Muhammad, Gaia (Mother Earth) and witch doctors to the same level of Jesus. The everlasting gospel of Christ must be proclaimed in its totality and integrity, unmixed with human error. We cannot remain silent while the fundamental truths of the Bible are rejected. Jesus said:

“He who believes in Him is not condemned; but he who does not believe is condemned already, because he has not believed in the name of the only begotten Son of God.” John 3:18.