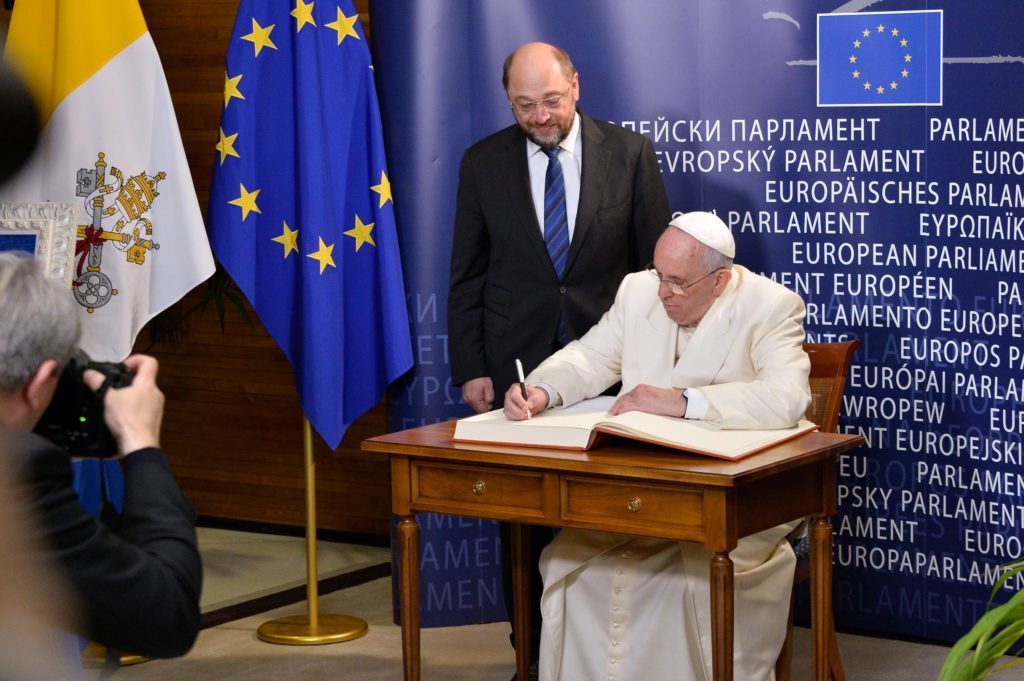 The European Union heads of state and government will be traveling to Rome to meet with Pope Francis ahead of their annual summit. They are going to hear the Pope share his “wisdom” and “vision” for the future of the European Union.

Some of the EU leaders have expressed that “Pope Francis is the ultimate world leader.”

We are seeing the disintegration of the free states as the leaders in Europe unite with the Vatican seeking her help to ensure success in the work of politics. However, this kind of relationship between civil and religious powers will bring disastrous results in the end because history teaches that no government can survive long when under the influence of Rome.

When civil rule comes under the influence of the church, these schemes tend to lead to the nations being controlled by and taken advantage of by the church. This movement leads to both the downfall of the church and state. When the church enters into an unholy alliance with the state that’s when her simplicity become corrupted with influence and power. This opens the way for the church to become arbitrary and persecutor to minority groups who reject the churches man-made traditions.

However, this is the church-state model described in the book of Revelation 13. Satan will deceive mankind through a corrupt church-state power. We see two organizations, church and state, being used in the final attempt to destroy God’s truth and faithful people.

Here is the false worship that will exist in the last days. The world and its leaders are “wondering” after a false system of religion. The world is being Romanized. The views or Rome are being sough out by the world for implementation. The moment is ripe to establish the Papal New World Order after the ancient Roman Empire.

But the truth is that no religious system that places a barrier between the people and the pure word of God can ever bring peace or purity to the soul. The true religion of Christ means the supremacy of the Word of God. The voice of the living God is the only authority that matters when it comes to our religion and faith; and this voice is heard in His Word. This means that we must reject the human teaching, the altered commandments, and traditions of men which are all errors as far as God is concerened. Many of these errors are found in Roman Catholicism and Protestantism.

To reject the clear teaching of God’s word and to reject God’s commandments so that we can keep man’s traditions is to make the same mistake made by the Pharisees.

“But in vain they do worship me, teaching for doctrines the commandments of men.” Matthew 15:9.

“Which all are to perish with the using after the commandments and doctrines of men.” Colossians 2:22.