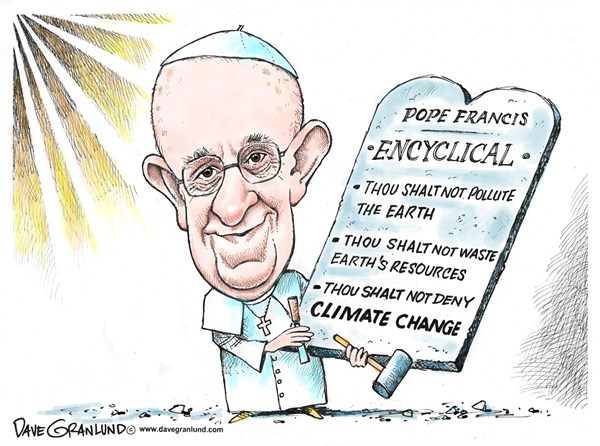 Pollution is now the new “original sin” that needs to be condemned and climate change deniers are the new sinners that are in need of redemption. The new gospel message is preaching the immediate phasing out of fossil fuels. This is the new salvation that the world needs today, according to the “new” gospel coming out of the Vatican. All this is a bunch of HOT air that is several degrees warmer than Al Gore’s global warming gospel.

Pope Francis wants to mobilize political leaders around his message so that they can pass legislation that will transform our global economic structure to a “green” technological system of justice. This vision includes the redistribution of wealth from the industrialized nations to third world countries under the guise of “climate change.”

The good fight is no longer about combating abortion, gay marriage or family values. What is going to destroy our world are not these traditional moral issue, no, we need to be preoccupied in combating greenhouse gases.

Sorry Pope, the church is not called to preach politics, communism, socialism or any other “gospel.” We are told in God’s word that we cannot allow anyone to remove us to “another gospel.”

“I marvel that ye are so soon removed from him that called you into the grace of Christ unto another gospel: Which is not another; but there be some that trouble you, and would pervert the gospel of Christ. But though we, or an angel from heaven, preach any other gospel unto you than that which we have preached unto you, let him be accursed. As we said before, so say I now again, If any manpreach any other gospel unto you than that ye have received, let him be accursed. For do I now persuade men, or God? or do I seek to please men? for if I yet pleased men, I should not be the servant of Christ.” Galatians 1:6-10.