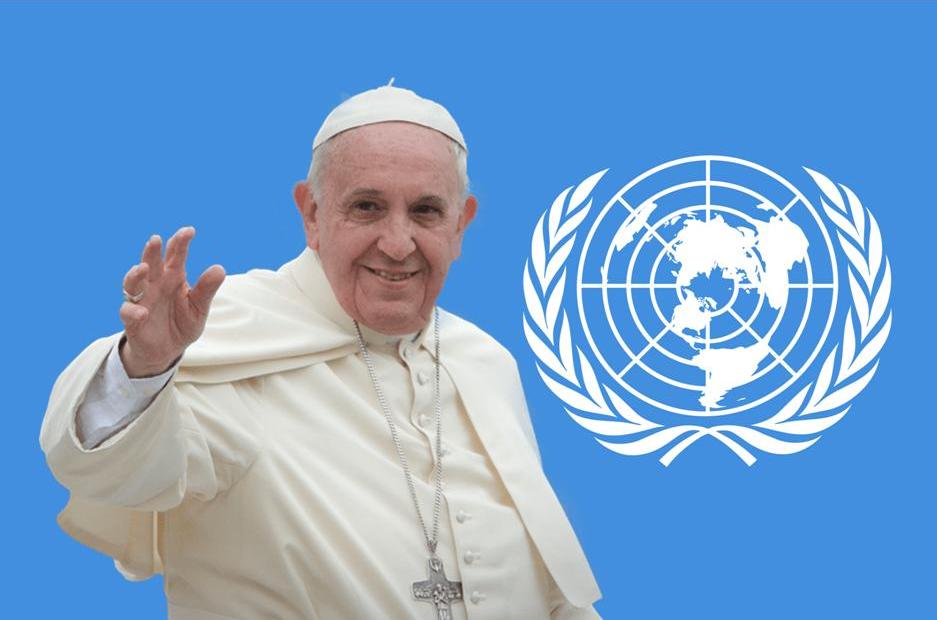 Pope Francis will commemorate the International Day of Human Fraternity on February 4, 2021 with United Nations Secretary António Guterres and the Muslim Grand Imam Ahmad Al-Tayyeb. [1] The event will take place in Abu Dhabi. Back on December 21, 2020, the United Nations General Assembly unanimously declared February 4 as the International Day of Human Fraternity. [2] The Vatican reported that this was done in response to the “clear call of Pope Francis”:

“This celebration responds to a clear call that Pope Francis has been making to all humanity to build a present of peace in the encounter with the other,” stressed Cardinal Miguel Ángel Ayuso Guixot MCCJ, President of the Pontifical Council for Interreligious Dialogue. “In October 2020, that invitation became even more vivid with the Encyclical Fratelli tutti. These meetings are a way to achieve true social friendship, as the Holy Father asks of us,” he added. [3]

Pope Francis will ally himself with the different religious faiths and with the United Nations to forge a new political brotherhood. This is what they will be celebrating on February 4, 2021. This is a brotherhood that is devoid of the gospel and of God. How can you have a brotherhood of man without the Fatherhood of God who created us all? The true gospel of Christ connects us to God and is more concerned with people’s spiritual lives than with political alliances.

On several occasions the mission of Jesus was confused with a political movement. Many wanted to use Christ to help restore Israel politically. Jesus clearly told His apostles to stay away from political movements and that they should instead be witnesses to His gospel in “Jerusalem and in all Judea, and in Samaria, and unto the uttermost part of the earth.”

“When they therefore were come together, they asked of him, saying, Lord, wilt thou at this time restore again the kingdom to Israel? And he said unto them, It is not for you to know the times or the seasons, which the Father hath put in his own power. But ye shall receive power, after that the Holy Ghost is come upon you: and ye shall be witnesses unto me both in Jerusalem, and in all Judaea, and in Samaria, and unto the uttermost part of the earth.” Acts 1:6-8.

On another occasion, Jesus refused to accept any kind of political power or use the political systems of this world to promote His message. Jesus clearly demonstrated that His mission was purely spiritual and not political:

“When Jesus therefore perceived that they would come and take him by force, to make him a king, he departed again into a mountain himself alone.” John 6:15.

The kingdom that Jesus advocated was the Kingdom of God. He clearly taught that only through baptism and repentance can we join the true “brotherhood” of heaven.

“Jesus answered, Verily, verily, I say unto thee, Except a man be born of water and of the Spirit, he cannot enter into the kingdom of God.” John 3:5.

The gospel of Christ presents God’s kingdom as the only one we must strive to enter. And we will only enter the kingdom of God through faith, baptism and a change of heart. This is not the unity being pursued by Pope Francis. He is trying to unite truth and error, light and darkness and Christ and Beelzebub – all in the name of brotherhood. Idolatry is abhorred by God (Exodus 20:1-6), and in this new fraternity, we see the endorsement of every false god –  Falon Gong, Sikhism, Buddhism, Jainism, Hinduism, Bahá’í, Zoroastrianism, Mother Earth, pantheism, animism, witchcraft and every god of wood and stone.

Unfortunately, this is what is presented in Fratelli Tutti. This is what Pope Francis stands for. The truth is that on February 4, 2021, during the International Day of Human Fraternity, we will be witnessing the fulfillment of Bible prophecy, but not what the world is thinking.

The multi-faith, multi-god universal fraternity that Pope Francis is creating with globalists, politicians, business leaders and bankers is the coalition described in Revelation that will seek to implement world control through global socialism. This will be orchestrated by the beast and the 10 Kings and will eventually lead to the mark of the beast:

“And the ten horns which thou sawest are ten kings, which have received no kingdom as yet; but receive power as kings one hour with the beast. These have one mind, and shall give their power and strength unto the beast.” Revelation 17:12.

“And in the days of these kings (ten kings, ten toes) shall the God of heaven set up a kingdom, which shall never be destroyed: and the kingdom shall not be left to other people, but it shall break in pieces and consume all these kingdoms, and it shall stand for ever.” Daniel 2:44.

They are planning right now to create a global structure that will enforce Catholic social doctrines. These global elites are trying to radically transform our world. They first tried to achieve their goal through the so-called climate crisis, but not everyone was on board. Now the Covid-19 pandemic is the new crisis to fulfill their dreams: church closures, the suspension of civil and religious liberties, mask mandates, travel restrictions, forced vaccinations and soon, a forced Sunday Law.

Can’t we see how prophecy is fulfilling? Can’t we see that the global kingdom of the beast is being established? Independent nations will soon lose their sovereignty. People will lose their individual freedoms and their Christian values. This will end with a push to demand submission to the mark of the beast, without which no one will be able to buy, sell, work, travel or participate in the new global economy.

“O ye hypocrites, ye can discern the face of the sky; but can ye not discern the signs of the times?” Matthew 16:3.