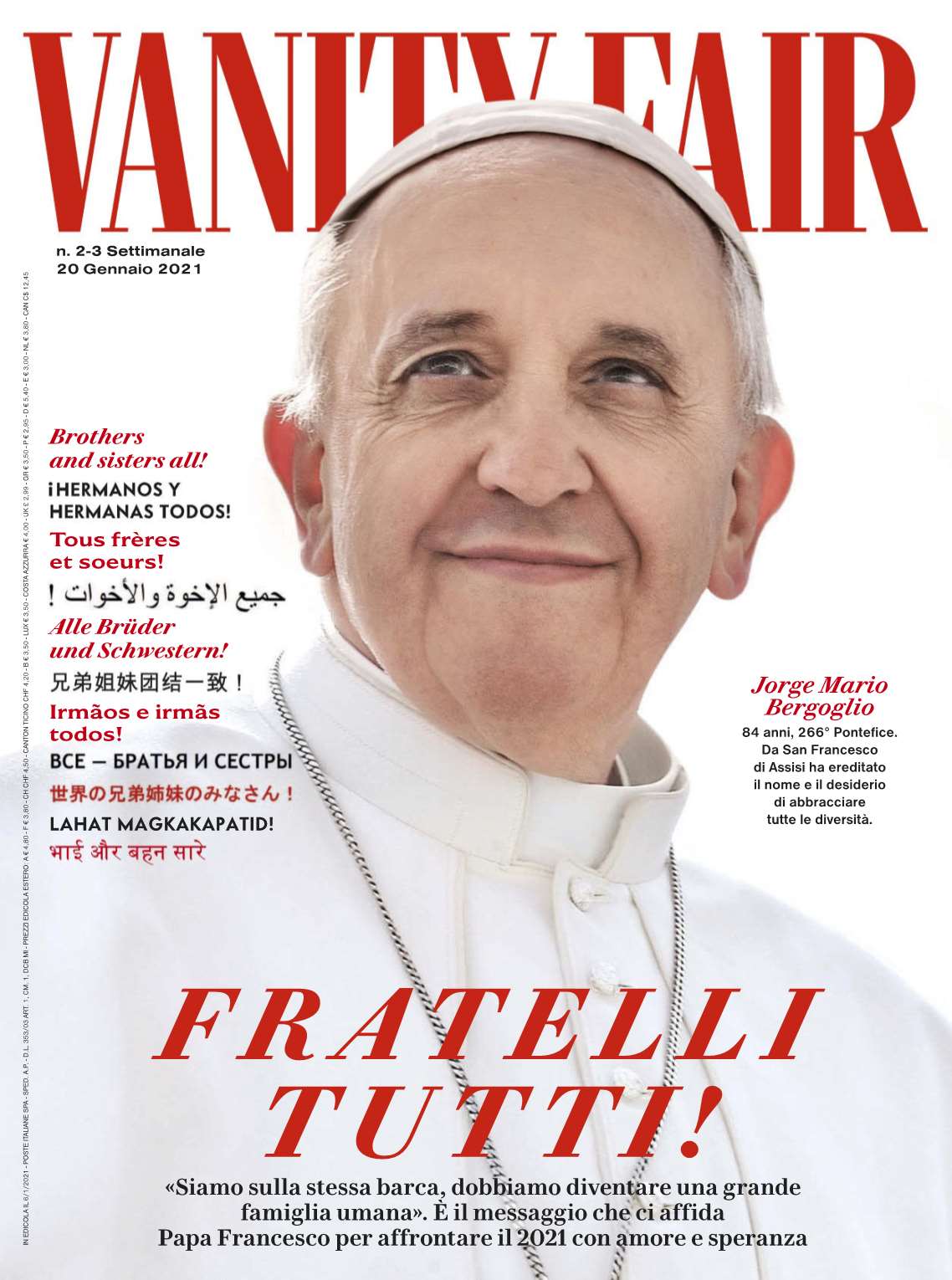 The January 2021 Italian edition of Vanity Fair dedicated its cover to Pope Francis and his message “Fratelli Tutti.” [1] The message posted on the cover reads:

FRATELLI TUTTI! We are all brothers and sisters. “We are on the same boat, we must become a great human family” is the message that Pope Francis entrusts to us to face 2021 with love and hope. Jorge Mario Bergoglio – 84 years old, 266th pontiff, he inherited the name and the desire to embrace all diversities from St. Francis of Assisi.

Vanity Fair is a global entertainment and fashion magazine that promotes a postmodern and countercultural worldview. This publication advocates on behalf of the LGBT+ movement, [2] the radical gender theory, [3] Planned Parenthood (abortion) [4] and many other liberal causes. Vanity Fair is hostile and antagonistic towards the Bible and conservative Christians in general. But they love Pope Francis. The secular and agnostic world embraces the Pope and his left-wing socialist message. Why? Because it is in harmony with our corrupt culture and the world loves its own.

This exaltation of Pope Francis by a secular and revolutionary magazine shows just how much the Pope’s message is loved by the world. Notice what Jesus says about this:

When Jesus calls us out of the world, we become children of God. Then the world will hate us because we are no longer being actuated by the principles or spirit of this world. When our message and influence are no longer carnal but spiritual, they will lead people to holiness and righteousness and not to sin. The world doesn’t want this. Notice what Jesus said to His own brothers and contemporaries, members of the Jewish nation:

“The world cannot hate you; but me it hateth, because I testify of it, that the works thereof are evil.” John 7:7.

Jesus was in conflict with the world, and it must always be that way. The words and deeds of Christ bore witness against the wickedness of this age: greed, lust, depravity, pride, envy and wrath. Jesus spoke the truth with love and as a result the world hated Him. Why? Because Jesus preached repentance and spoke against sin and apostasy.

But the world will not oppose you if you don’t bear a testimony against it. If you preach peace, financial prosperity, free health care, free housing, free food, free money, free internet and free stuff, then you will be loved by the world, but in conflict with Christ:

“Jesus answered them and said, Verily, verily, I say unto you, Ye seek me, not because ye saw the miracles, but because ye did eat of the loaves, and were filled. Labor not for the meat which perisheth, but for that meat which endureth unto everlasting life, which the Son of man shall give unto you: for him hath God the Father sealed.” John 6:26.

Many followed Jesus because they wanted to fill their bellies and pockets. Selfishness will attract people who are looking for some kind of material advantage. This will cause the church to fill people’s stomachs more than filling them with the glory of Christ. Many church leaders today seek worldly interests and political power over the spiritual needs of the people. These peace and safety preachers attract no opposition from the world.

But every time we speak out against hypocrisy and denounce the abominations of the world, the corrupt, unrepentant, and unsanctified will not tolerate it. Let Pope Francis speak out against the fashionable sins of this age – abortion, homosexuality, euthanasia, pornography, prostitution and the radical, unbiblical gender theories – and see how quickly they will remove him from off the cover of Vanity Fair.

“Preach the word; be instant in season, out of season; reprove, rebuke, exhort with all longsuffering and doctrine.” 2 Timothy 4:2.

Let every pastor and preacher fulfill his sacred duty and proclaim the Gospel in all its truth and power, and the world will rise up in opposition. But, God’s name will be glorified and many will come to repentance and be saved in the kingdom of God. God’s truth is in opposition to the dark, evil society in which we live. We must speak the truth and we must speak it boldly. God’s people must preach and teach what He has declared in His word, regardless of how it is received.

Preaching truth in the face of evil is our duty. That’s why God has a church in this world. This is how God addresses the floodgate of iniquity that we see in our world today. This is how God responds to the cultural crisis. As in all ages, God sends preachers of righteousness to warn men and women of a coming judgment if there is no repentance. Preachers like Enoch, Noah, Moses, Elijah, Daniel, Jeremiah, John the Baptist and Martin Luther were raised up by God to directly address the evil of their day. This is how God has always acted; and that’s still what He is doing today:

“In every generation God has sent his servants to rebuke sin, both in the world and in the church. But the people desire smooth things spoken to them, and the pure, unvarnished truth is not acceptable. Many reformers, in entering upon their work, determined to exercise great prudence in attacking the sins of the church and the nation. They hoped, by the example of a pure Christian life, to lead the people back to the doctrines of the Bible. But the Spirit of God came upon them as it came upon Elijah, moving him to rebuke the sins of a wicked king and an apostate people; they could not refrain from preaching the plain utterances of the Bible,—doctrines which they had been reluctant to present. They were impelled to zealously declare the truth, and the danger which threatened souls. The words which the Lord gave them they uttered, fearless of consequences, and the people were compelled to hear the warning. Thus the message of the third angel will be proclaimed” (Great Controversy, p. 606).