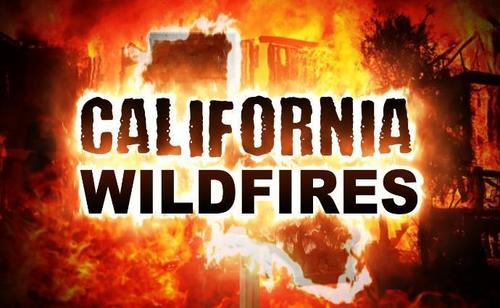 “Fires will break out unexpectedly and no human effort will be able to quench them. The palaces of earth will be swept away in the fury of the flames…The end is near, probation is closing. Oh, let us seek God while He may be found, call upon Him while He is near!” (Messages to Young People, 89, 90).

We are told that sometimes fire come as a result of God’s judgment upon the land. The Lord at times allows firestorms to bring swift, furious and utter destruction upon the wicked.

“Upon the wicked he shall rain snares, fire and brimstone, and an horrible tempest: this shall be the portion of their cup. For the righteous LORD loveth righteousness; his countenance doth behold the upright.” Psalm 11:6, 7.

God is holy and He intervenes when wicked men reach the limits of His mercy. Men are given the portion of their cup that is based according to their deeds. In times of disaster we must hasten to the cross of Christ and seek His grace and mercy to stay these destructions.

We are witnessing the worst fires ever seen before throughout the history of California. 2017 will go down in the record books as a historic year for California. Raging fires have completely ravaged Ventura County and now has set its eyes on Santa Barbara County. There seems to be no end to this crisis.

“The Spirit of God is being withdrawn. Disasters by sea and by land follow one another in quick succession. How frequently we hear of earthquakes and tornadoes, of destruction by fire and flood, with great loss of life and property! Apparently these calamities are capricious outbreaks of disorganized, unregulated forces of nature, wholly beyond the control of man; but in them all, God’s purpose may be read. They are among the agencies by which He seeks to arouse men and women to a sense of their danger.” (Prophets and Kings, 277).

These fiery disasters come to arouse us to a new sense of urgency. These ancient prophetic judgments also fell upon the ancient, sinful cities of Sodom and Rome. This all-consuming firestorm in California resembles the past judgments upon sinful cities by a righteous and holy God. California and the movie industry is riddled with corruption and vice. They are leading the nation in terms of secular and godless policies.

“And the light of Israel shall be for a fire, and his Holy One for a flame: and it shall burn and devour his thorns and his briers in one day.” Isaiah 10:17.

America’s cities have become playgrounds for unspeakable iniquity and sin. They are long-overdue for a similar judgment. As the leaders of this nation continue to ignore the warning calls for repentance, God’s judgments will only get worse and become more frequent.

“In the last scenes of this earth’s history war will rage. There will be pestilence, plague and famine. The waters of the deep will overflow their boundaries. Property and life will be destroyed by fire and flood. We should be preparing for the mansions that Christ has gone to prepare for them that love Him.” (Maranatha, 174).