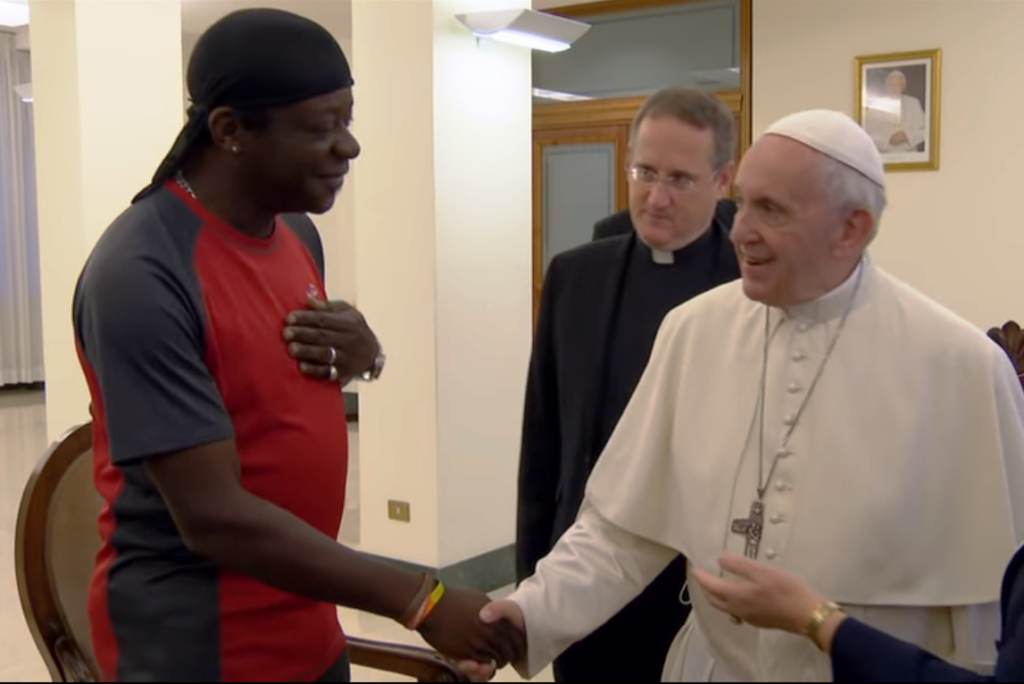 The greatest injustice that the church can do today is lie to people. Those who tell sinners what they want to hear and not what God says, do not posses a true love for souls. True, genuine care and compassion for people will require that we speak the truth in love (Ephesians 4:15).

But sadly today we have a church that attempts to reaffirm sinful lifestyles. We have pastors and leaders today who refuse to speak truth for fear that some might become offended. Some churches seem to be afraid of speaking out against sin or to warn of the condemnation that will befall all those who do not repent.

Pope Francis is leading the way by setting new standards of morality for gays and atheists. British TV personality Stephen Amos is both gay and an avowed atheist. [1] He was recently at the Vatican on a “pilgrimage” to visit Pope Francis. Steven’s journey was part of a BBC documentary called “The Road to Rome.” [2]

When Stephen Amos met Pope Francis he raised the issue of “atheism” and “homosexuality” in relationship to the church. Mr. Amos said the following to Pope Francis:

“So, me coming on this pilgrimage being non-religious, I was looking for answers and faith. But as a gay man I don’t feel accepted.” [3]

How did Pope Francis respond to the dilemma of “accepting” atheism and homosexuality in the church? Did he express to this individual that God has a plan that is greater and higher than we as humans set for ourselves – which includes keeping God’s commandments? (John 14:15). Did Pope Francis share how faith in God and in His Word will transform our lives to be more like the One we follow—Jesus Christ? (1 Peter 2:21, 22). Or did the pope tell him that the “unbelieving” (Revelation 21:8) will be lost and that “homosexuals” (1 Corinthians 6:9 NKJV) won’t be in heaven?

No. Pope Francis instead affirmed this person in his error and in his sinful life. Notice how the pope responded:

“Giving more importance to the adjective [deeds] than the noun [person] is not good. We are all human beings. It doesn’t matter who you are or how you live your life, you do not lose your dignity. There are people who prefer to select or discard people because of the adjective. These people don’t have a human heart.” [3]

Discarding people? No. The pope is discarding truth. Whenever there is a person heading for eternal ruin because of unbelief or impurity, we are discarding them and consigning them to destruction when we say “you still have dignity,” don’t worry and everything is OK.

Everyone was born in the image of God, so clearly all human beings have dignity. But the dangerous reasoning that the pope is making is this – “Because we are in God’s image it doesn’t matter how we live our lives.” This is not the gospel. The gospel teaches us that God’s love elevates us to live a life that is pleasing to Him (Psalm 40:8, Revelation 14:12).

The new, popular gospel that is sweeping the churches is one that will tell you that you can be saved with all your sins. The world is being lulled into a false sense of carnal security by false teachers who say that sinners don’t need to change or repent. It’s the devil’s gospel that says that God will leave you just as you are – miserable, in pain and suffering.

The truth is that we have a faithful Savior who has the power to give us a new life of purity and freedom through His life-changing gospel. We serve a God who can turn the vilest sinner into a minister of  righteousness. We need to care enough about people to tell them the truth and to warn them about the coming judgment that will fall upon the unrepentant wicked.

“God does not send messengers to flatter the sinner. He delivers no message of peace to lull the unsanctified into fatal security. He lays heavy burdens upon the conscience of the wrongdoer, and pierces the soul with arrows of conviction. The ministering angels present to him the fearful judgments of God to deepen the sense of need, and prompt the cry, ‘What must I do to be saved?’ Then the hand that has humbled in the dust, lifts up the penitent. The voice that has rebuked sin, and put to shame pride and ambition, inquires with tenderest sympathy, ‘What wilt thou that I shall do unto thee?'” (Desire of Ages, 104).