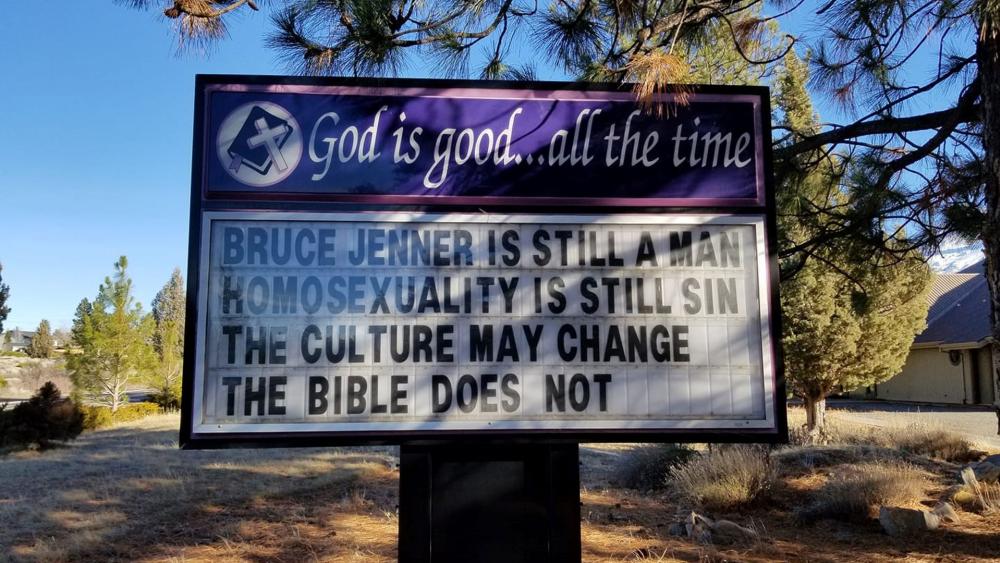 Pastor Justin Hoke posted a sign outside of his church that read in part, “Homosexuality is still sin. The culture may change. The Bible does not.” The church sign created a backlash within his local community. Some people gathered to protest while others vandalized the sign.

Justin Hoke had to resign from his position as pastor after the church he served became internally divided. [1] There is a growing divide taking place in the churches on the LGTB+ question. It’s affecting every church and every faith-based institution including our own. [2]

Why is the church even divided on this issue? And why are more and more pastors refusing to engage this growing controversy? Is it because the word of God is not clear on this subject? Of course not. It’s not that the Bible isn’t clear. It’s partly because some churches won’t talk about homosexuality in order evade all the controversy associated with this issue, while others churches have members who simply don’t read their Bibles anymore. According to a recent poll, almost 50% of Christians no longer read the Bible, let alone practice what it says. [3]

This is the main reason why we see so much confusion within Christianity. The modern Christian is no longer using the Bible to form his or her views about sexuality. So then what source are they using? Many churches today are turning to the secular world for answers and not to the Bible. The modern church is more in tune with Hollywood than with the Holy Scriptures. We live in an age where many are seeking the praise of man instead of the commandments of God.

This confusion is causing many people of faith to condone certain lifestyles that the Bible simply does not support. Whenever so-called believers change God’s word in order to accommodate the corrupt standards of this age, they are actually fulfilling the words of Paul when he wrote:

In an effort to become more accepting and more welcoming many houses of worship are compromising the clear teachings of the Bible. The cry from compromising Christians is, “Your not supposed to judge.” What they really mean is that they don’t want to hear any message that doesn’t make them feel good or that doesn’t conform to their opinions.

To judge simply means to make a distinction between right and wrong, truth and error, sin and righteousness. We don’t have to define these differences because God already has. We simply need to make right choices – choices that are based upon the word of God. The Bible actually says that we have to be able to discern and judge spiritually according the instruction of the Lord.

“But the natural man receiveth not the things of the Spirit of God: for they are foolishness unto him: neither can he know them, because they are spiritually discerned. But he that is spiritual judgeth all things, yet he himself is judged of no man. For who hath known the mind of the Lord, that he may instruct him? But we have the mind of Christ.” 1 Corinthians 2:14-16.

We can expect to see more and more pastors losing their jobs over this issue in the coming years thanks to this recent victory by LGBT+ activists. Silencing the opposition becomes the only option by those who refuse acknowledge the binding claims of the Bible.

By refusing to say what God says about sin we deceive the people. The culture today says that sin is not sin, while our Creator says otherwise. And now the church is caught in the middle trying to please everyone. Who and what is guiding the church today? Is it God or popular culture?

“Deal faithfully with wrongdoing. Warn every soul that is in danger. Leave none to deceive themselves. Call sin by its right name. Declare what God has said in regard to lying, Sabbathbreaking, stealing, idolatry, and every other evil. “They which do such things shall not inherit the kingdom of God.” Galatians 5:21. If they persist in sin, the judgment you have declared from God’s word is pronounced upon them in heaven. In choosing to sin, they disown Christ; the church must show that she does not sanction their deeds, or she herself dishonors her Lord. She must say about sin what God says about it. She must deal with it as God directs, and her action is ratified in heaven” (Desire of Ages, p. 805).