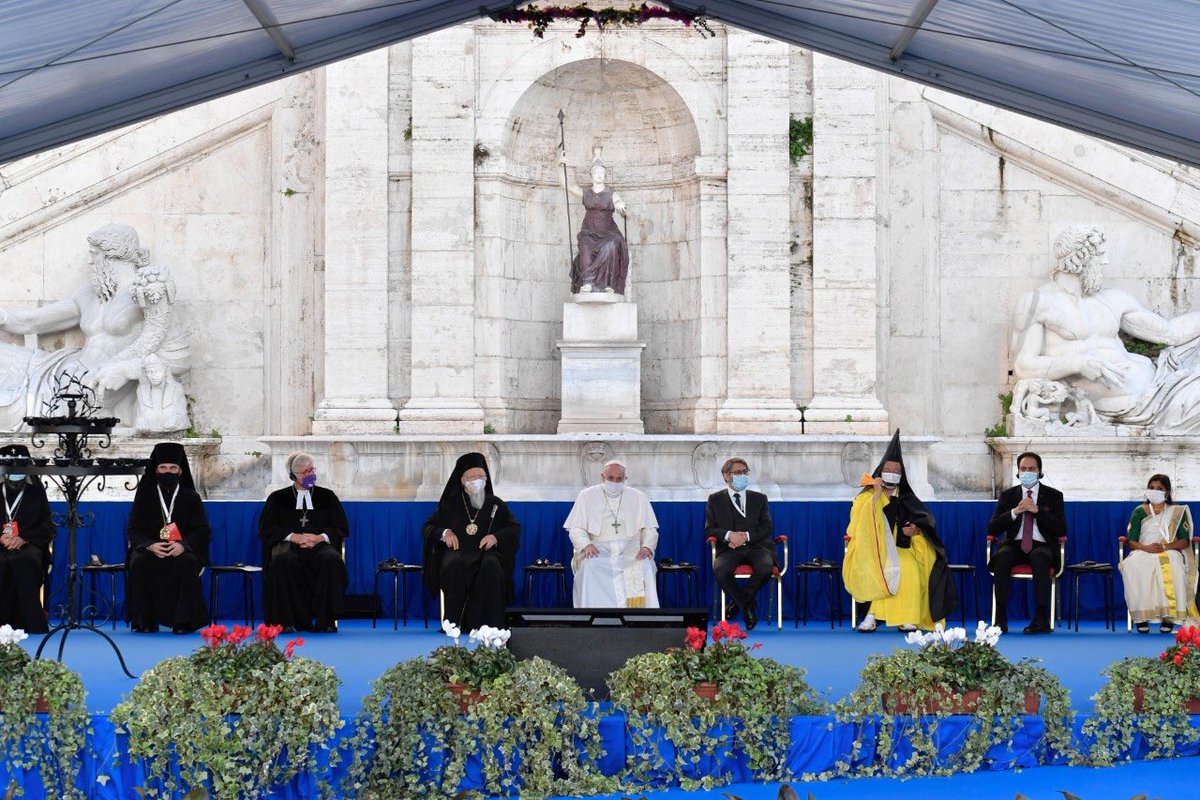 On October 20, 2020, Pope Francis met with the main religions of the world in Rome and with political leaders during the International Prayer Meeting for Peace entitled “No one is saved alone – Peace and Fraternity.” Everyone gathered in the “Spirit of Assisi” to invoke the different gods to bring world peace. They all signed a peace pledge as Pope Francis declared “firmly” that “no one can be saved alone: no people, no single individual!” [1] 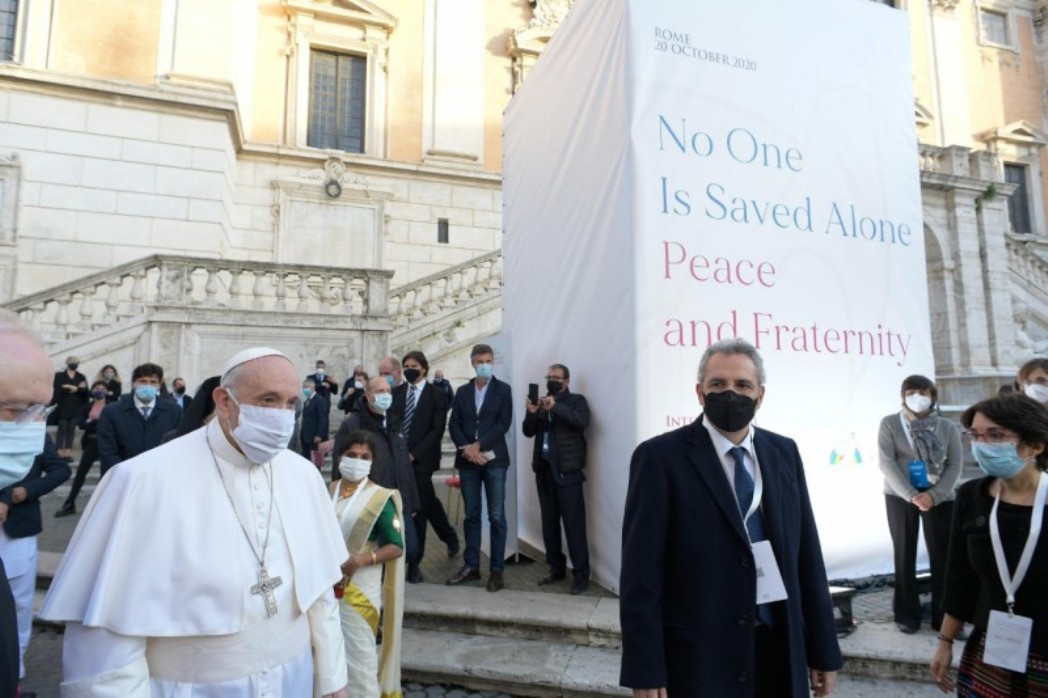 Christian, Orthodox, Buddhist, Sikh, Hindu, Muslim and indigenous faiths prayed for peace and pledged to commit themselves to each other through a candle lighting ceremony. This ceremony was an outward sign of their promise of peace and fraternity. [2] Throughout the event, the Pope reiterated his message from Fratelli Tutti and said:

“All of us are brothers and sisters!  Let us pray to the Most High that, after this time of trial, there may no longer be ‘others,’ but rather, a great ‘we,’ rich in diversity.  The time has come to boldly dream anew that peace is possible, that it is necessary, that a world without war is not utopian.” [3] 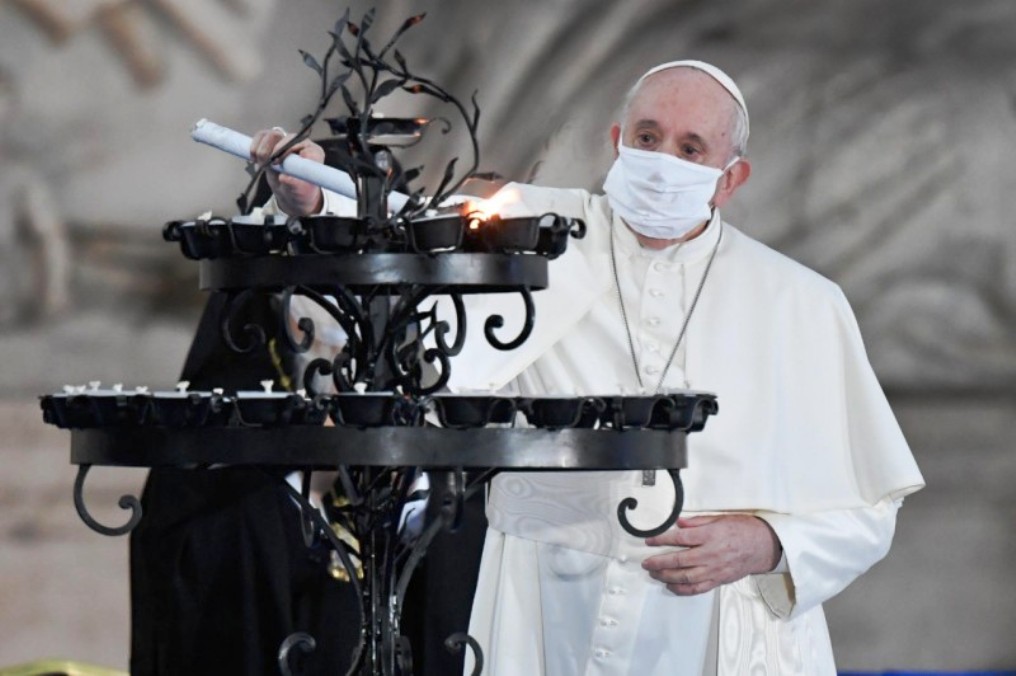 The Pope is uniting Catholicism, Protestantism and paganism into one. These are completely incompatible belief systems when considering the different gods they pray to. This is nothing new. Rome has done this before. History repeats itself. Emperor Constantine fused paganism with Christianity during the rise of the papacy. Later, Rome took a hit in 1798 when the Pope lost his dominion and became Napoleon’s prisoner. But now Pope Francis is helping to restore Rome’s former power by healing the deadly would. He is uniting Christianity with paganism once again and soon the infamous Sunday laws will come. Inspiration tells us:

“In the early part of the fourth century, the emperor Constantine issued a decree making Sunday a public festival throughout the Roman Empire. The day of the sun was reverenced by his pagan subjects, and was honored by Christians; it was the emperor’s policy to unite the conflicting interests of heathenism and Christianity. He was urged to do this by the bishops of the church, who, inspired by ambition, and thirst for power, perceived that if the same day was observed by both Christians and the heathen, it would promote the nominal acceptance of Christianity by pagans, and thus advance the power and glory of the church” (Great Controversy, p. 53). 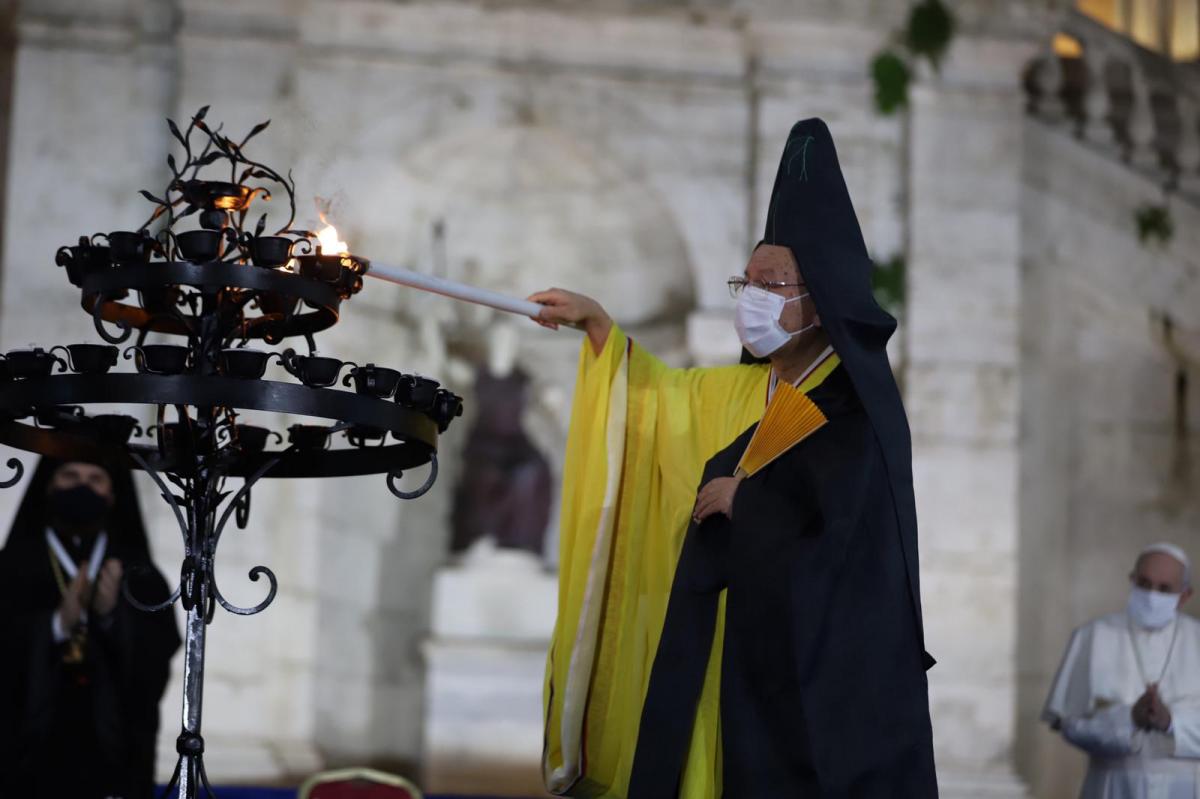 This is the new order or “fraternity” that is unfolding before our eyes – a mixture of every false religion under the sun. This is the new brotherhood that is advancing rapidly towards us. It’s not coming, it’s already here. Constantine’s efforts to merge Christianity and paganism led to the rise of the papacy, the implementation of a Sunday law, and the persecution of Seventh-day Sabbath keepers and anyone who spoke out against the rising apostasy. 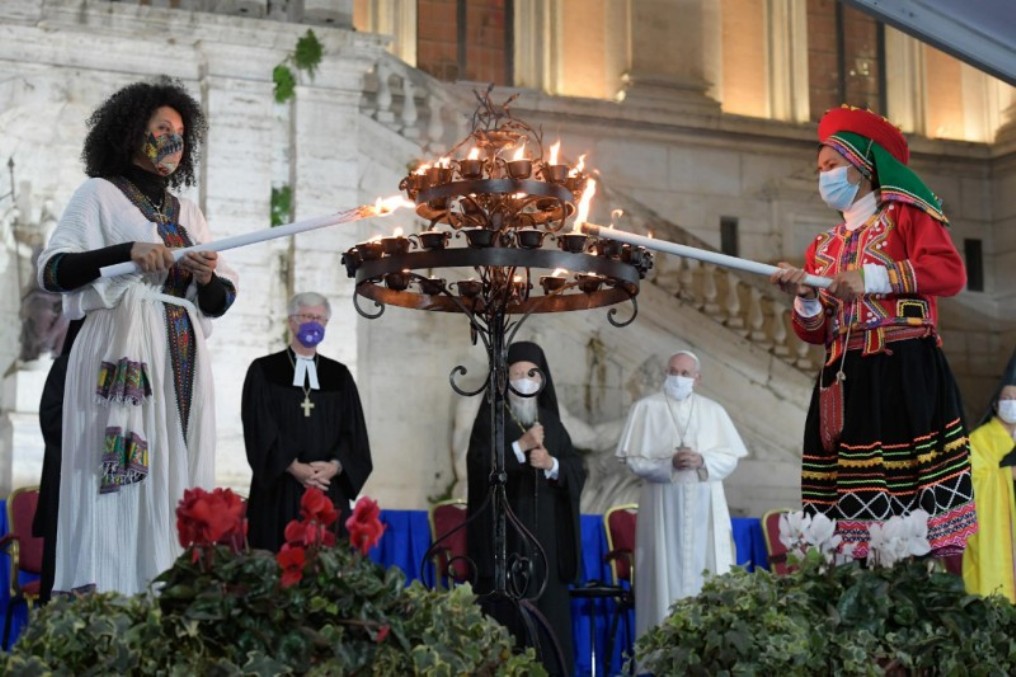 Indigenous faiths are part of the fraternity.

Today will be no different. It is not about a fraternity of peace that the Pope is creating. This is the healing of the deadly wound (Revelation 13:3) and a precursor to the green Sunday law (Revelation 13:15). This is the lawless system called  Babylon the Great that is causing the world to drink from the cup of wine of her fornication (Revelation 18:3). Why can’t our Adventist leaders see this? Why can’t we be like the early Waldensians and refuse to join this apostasy? We can only hope and pray for Jesus to come because this new fraternity that is being built will bring no “order” at all; but only chaos. 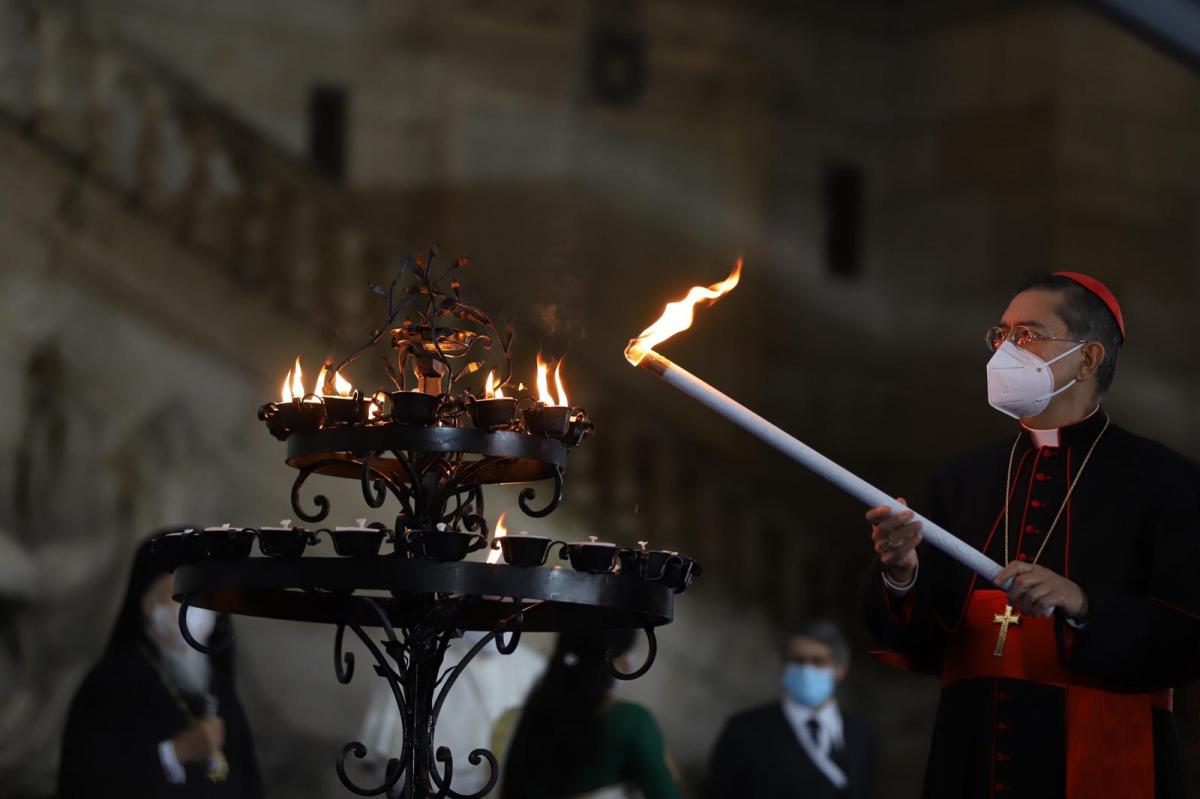 Pope Francis’ world peace pact will lead us to “a time of trouble, such as never was since there was a nation” (Daniel 12:1). Prophecy reveals that chaos, not peace, will reign during the closing scenes of earth’s history just before the coming of Jesus.

“There shall be … upon the earth distress of nations, with perplexity … men’s hearts failing them for fear, and for looking after those things which are coming on the earth … and then shall they see the Son of man coming in a cloud with power and great glory.” Luke 21:25-27.

The end of sin, sorrow, misery, evil, tyranny, terror and torment will take place when Jesus comes in the clouds of glory. Man’s best effort to establish lasting peace will always end in failure. 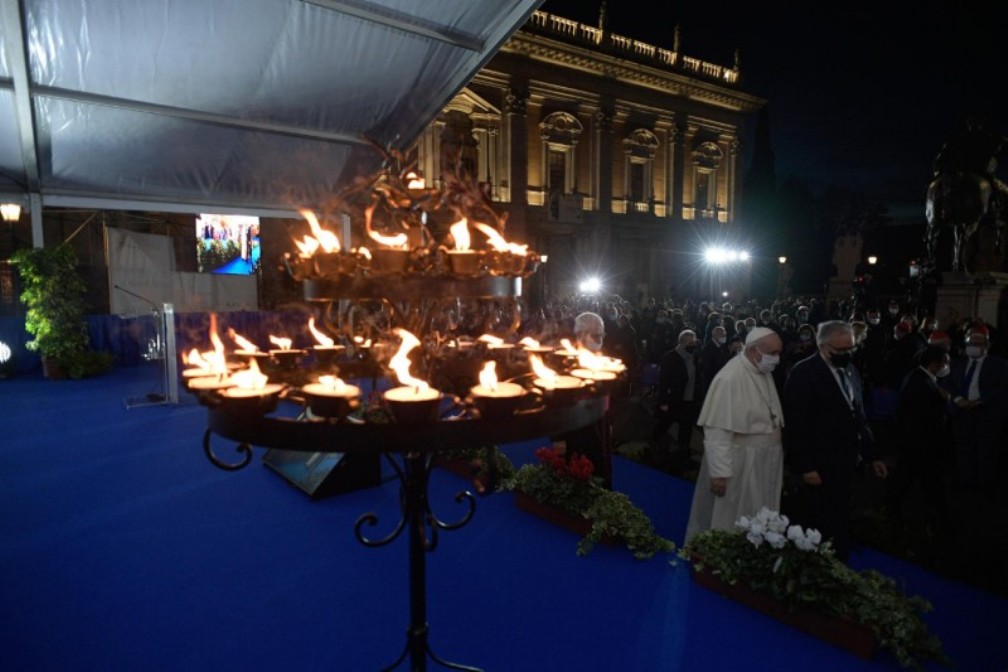 Fratelli Tutti: All the world’s religions are united.

It is a natural desire of the human heart to wish for peace and harmony. In the beginning we were created to be in peace and harmony with God. Once we are at peace with our Creator, then humanity will be at peace with each other. Mankind has sought for millennia to establish peace on earth. But because of sin, war replaced peace. 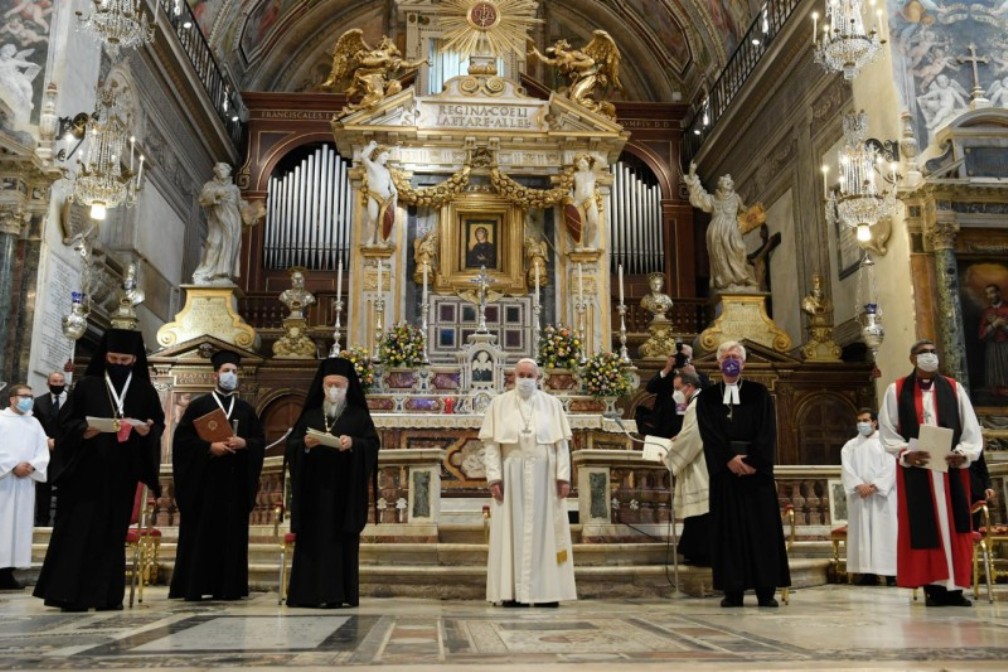 Wars stem from envy, greed, hate, pride, greed and similar evil desires. As long as these evil traits remain in our hearts, we can never have peace. These will only leave our lives when Christ enters our hearts. When Jesus comes in, sin goes out. This peace comes through union with Christ and obedience to God’s law.

The cause of all the trouble we see today is due to the great moral deterioration that is sweeping our world. This is clearly evident. We have widespread crime, extortion and corruption in all of our political systems. Our homes have become devoid of virtue and truth. Again, the word of God tells us that in the last days men would be:

“Lovers of “their own selves, covetous, boasters, proud, blasphemers, disobedient to parents, unthankful, unholy. Without nature affection, truce breakers, false accusers … lovers of pleasures more than lovers of God; having a form of godliness, but denying the power thereof.” (2 Timothy 3:2-5).

What is the cause of this downward trend? Men are seeking peace, liberty, equality and fraternity while transgressing the moral law of God:

“The same spirit that prompted rebellion in Heaven, still inspires rebellion on earth. Satan has continued with men the same policy which he pursued with the angels. His spirit now reigns in the children of disobedience. Like him they seek to break down the restraints of the law of God, and promise men liberty through transgression of its precepts” (Great Controversy, p. 500).

“Would we know the result of making void the law of God? The experiment has been tried. Terrible were the scenes enacted in France when atheism became the controlling power. It was then demonstrated to the world that to throw off the restraints which God has imposed is to accept the rule of the cruelest of tyrants. When the standard of righteousness is set aside, the way is open for the prince of evil to establish his power in the earth” (Great Controversy, p. 584).

“Those who teach the people to lightly regard the commandments of God, sow disobedience, to reap disobedience … If the law were not binding, why should any fear to transgress? Property would no longer be safe. Men would obtain their neighbor’s possessions by violence; and the strongest would become richest. Life itself would not be respected … The civilized world would become a horde of robbers and assassins; and peace, rest, and happiness would be banished from the earth” (Great Controversy, p. 585). 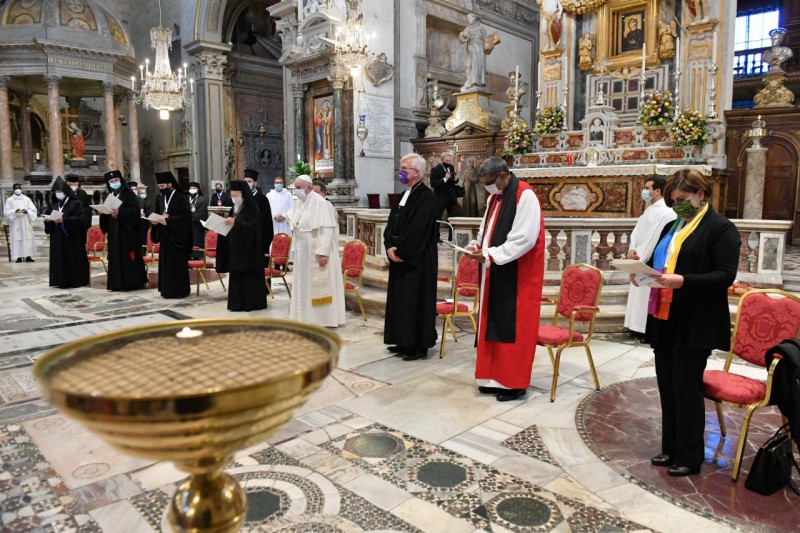 And any peace treaty or promise of peace or peace signing or man-made peace agreement in his current fallen sinful state can only be temporary and doomed to failure.

“For when they shall say, Peace and safety; then sudden destruction cometh upon them, as travail upon a woman with child; and they shall not escape.” 1 Thessalonians 5:8.

God’s word doesn’t predict a peaceful utopia. It predicts war, famine, pestilence, earthquakes, distress of nations with perplexities and the Roman abomination that will bring the final desolation. Are these signs evident in our world today? Absolutely! Not even one is missing. Then, says Jesus, “When ye shall see all these things, know that I am near, even at the doors” (Matthew 24:33).

The return of Christ, therefore, is imminent. And when He comes, then, and only then, will there be no more wars, suffering and death. The “former things will pass away” (Revelation 21:4). Until that momentous day comes, we can have peace in our hearts. It is a taste of the heavenly peace and rest that awaits God’s people. May Christ hasten His coming!