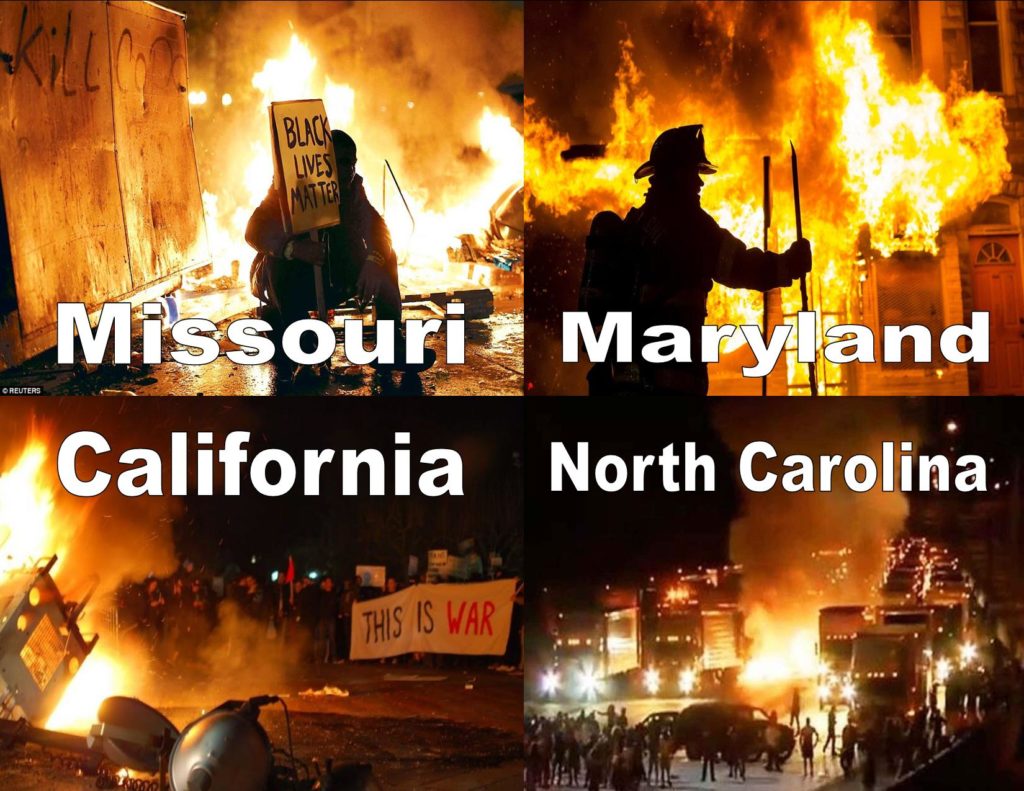 Racially charged riots have been boiling over in America. The results have been fires, violence, destruction of property and clashes with police. The American dream of peace, liberty and justice for all is turning into a nightmare as many prepare for a race war. Some call it anarchy and others call it a revolution.

All across this nation conflicts between police and minorities is escalating. The latest round of race riots started after a white policeman was cleared of killing a young black man. 120 people have been arrested after three nights of riots in St. Louis, MO.

Anthony Smith, a 24-year old black man, was shot dead by Jason Stockley, a white officer in 2011. Smith ran away from the police and was shot dead after a chase. The riots began last week after the officer was acquitted by a judge for murder.

Soon after St. Louis was on fire. Riots, looting, store-front destruction and police cars were being smashed. Accusations of police racism is fueling an age of anger and riots that is responsible for many of the fires and violence in our cities. There is tensions growing and feelings of mistrust among certain segments of society towards law enforcement. These scenes are increasing with frequency in American cities.

These very burnings were prophesied in the Bible:

“Ah sinful nation, a people laden with iniquity, a seed of evildoers, children that are corrupters: they have forsaken the LORD, they have provoked the Holy One of Israel unto anger, they are gone away backward. Why should ye be stricken any more? ye will revolt more and more: the whole head is sick, and the whole heart faint. From the sole of the foot even unto the head there is no soundness in it; but wounds, and bruises, and putrifying sores: they have not been closed, neither bound up, neither mollified with ointment. Your country is desolate, your cities are burned with fire: your land, strangers devour it in your presence, and it is desolate, as overthrown by strangers.” Isaiah 1:4-7.

These violent episodes and deteriorating race relations are just the symptoms of the godless and sinful age of the last days. And this spiritual crisis would result in the desolation and burning of our cities. God doesn’t just tell us why these violent protests are burning our cities; He also tells us how to solve this problem.

“Wash you, make you clean; put away the evil of your doings from before mine eyes; cease to do evil; Learn to do well; seek judgment, relieve the oppressed, judge the fatherless, plead for the widow. Come now, and let us reason together, saith the LORD: though your sins be as scarlet, they shall be as white as snow; though they be red like crimson, they shall be as wool. If ye be willing and obedient, ye shall eat the good of the land.” Isaiah 1:16-19.