“Let’s work towards peaceful co-existence between all religions!” [1] This was the actual message given on September 26, 2018 during the opening of the 2018 G20 Interfaith Forum. This gathering is being called the “world capital of ecumenism” and a “mega gathering of churches and faith-based organization.” [2]

For three days, top religious leaders from all the major faiths [Adventists, Catholics, Jews, Muslims, Protestants and pagans] are meeting in Buenos Aires, Argentina to discuss topics under the theme “Building Consensus for Equitable and Sustainable Development.” They are working together to help create policies on climate change, inequality, refugees, immigration, combating extremism, peace building and other human right issues. [3] 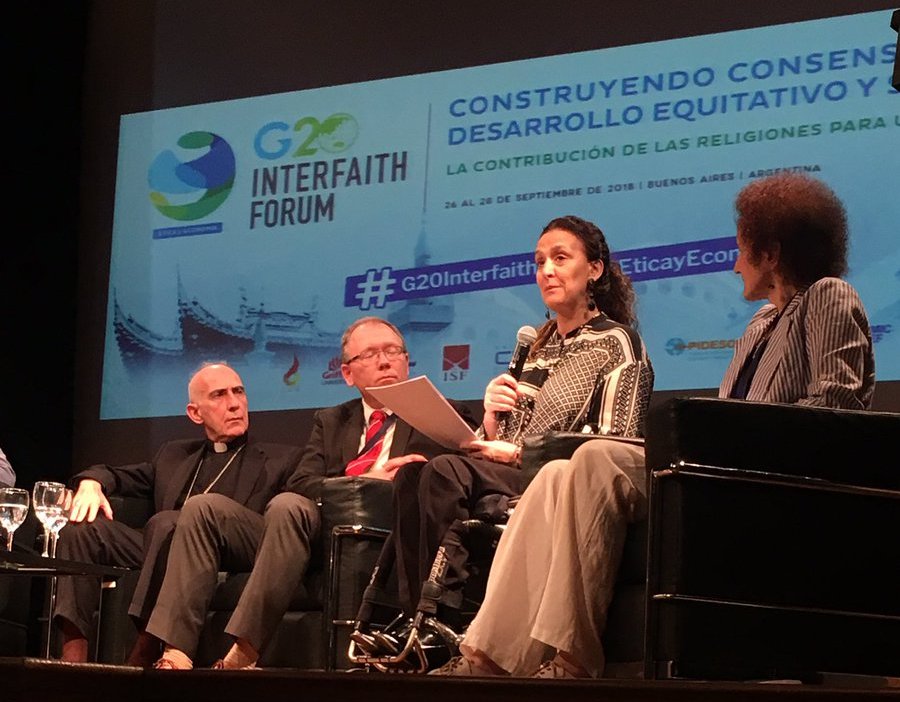 This global conference showcases how the world’s most powerful religious organisations are working together across denominational lines to bring change to our world. There is a strong Roman Catholic/Jesuit presence at this “interfaith” forum that is guiding all of these activities. In the above photo is Roman Catholic Monsignor and Bishop Carlos Malfa. [4] He is the General Secretary of the Argentina Episcopal Conference (the Roman Catholic Bishop’s Conference in Argentina). Bishop Carlos Malfa brought a special letter that Pope Francis prepared for this occasion and read it to the participants during the 2018 G20 Interfaith Forum. During the reading, Bishop Malfa also gave a picture slide-show presentation of Pope Francis. 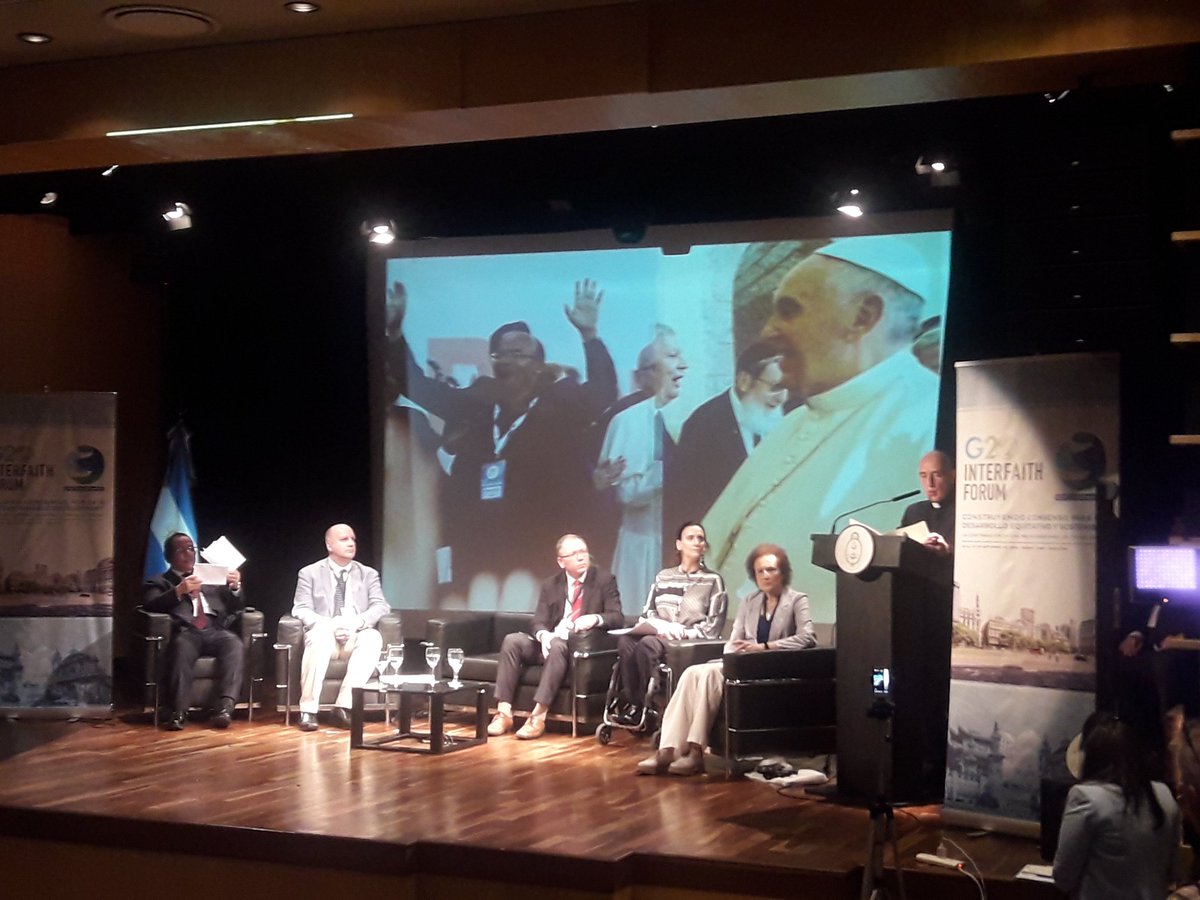 In the letter read by the Bishop, Pope Francis welcomed the participants by saying that the religious communities have to resolve the social issues of our day.

“These interfaith conferences, within the framework of the G20 Summit meetings, aspire to offer the international community the contribution of their different religious and philosophical traditions and experiences, to illuminate those social issues that concern us today in a special way.” [5] 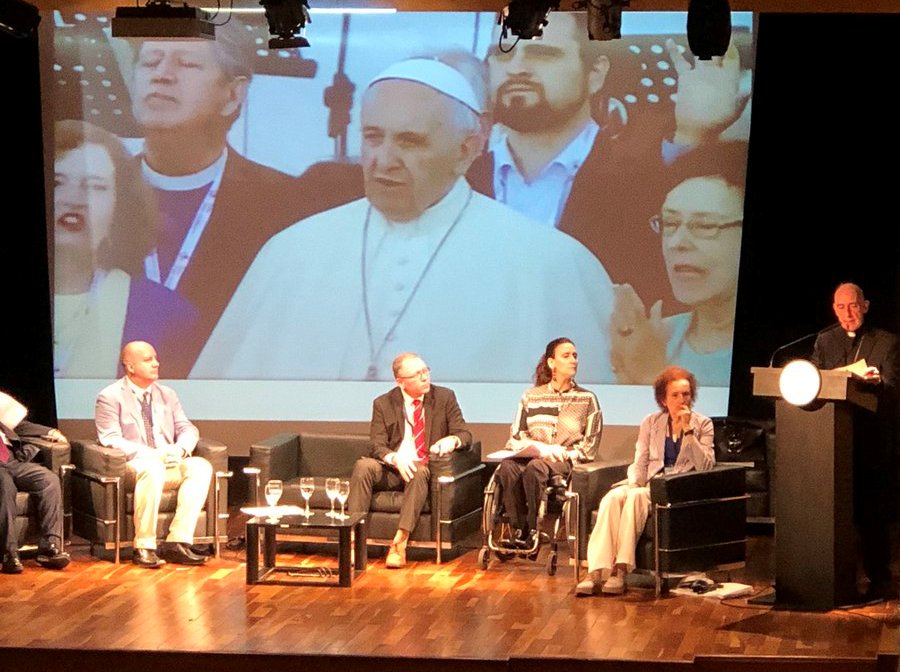 Pope Francis continued by stating that “religion” must be deeply-rooted into the building of society. Remember, when the pope says “religion,” he means Catholicism, and not historic, Biblical Protestantism.

“In these days of exchange and reflection, it is intended to explore more deeply the role of religions and their specific contribution in consensus-building, for a just and sustainable development that ensures a decent future for all.” [5] 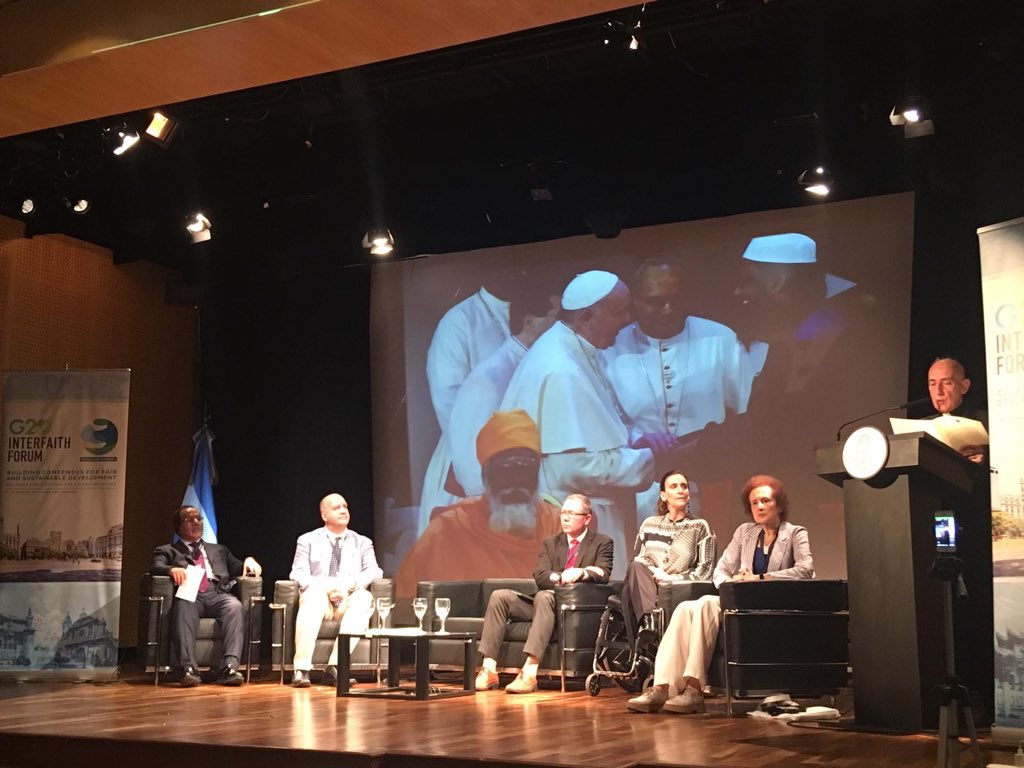 Pope Francis sent his greetings to the interfaith participants.

Pope Francis reminds this interfaith gathering that they cannot remain “indifferent.” They must fix societies problems.

“We are currently facing difficult situations that not only affect many of our neglected and forgotten brothers but also threaten the future of all humanity. And men of faith cannot remain indifferent to these threats.” [5] 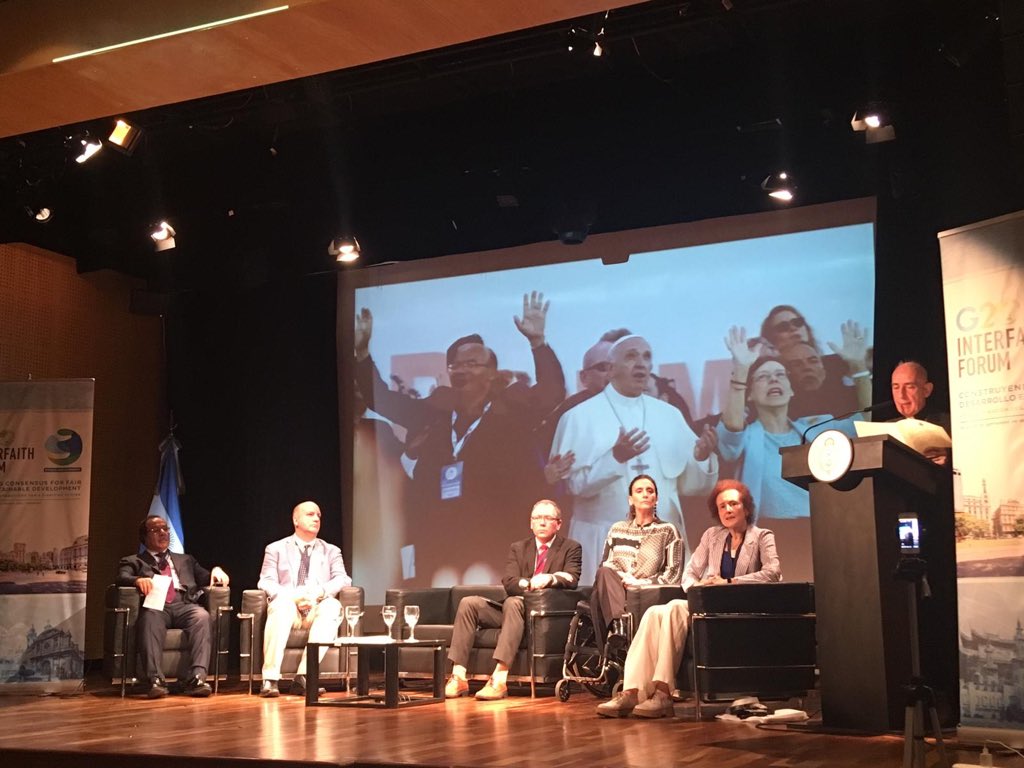 A photo slide-show was made of Pope Francis during the reading.

Pope Francis said that the first step in achieving change in the world is for the religious faiths to engage in “constrictive dialog.”

“Thinking about religions, I believe that beyond differences and different points of view, a first fundamental contribution to the world today is to be able to show the fruitfulness of constructive dialogue to find together the best solutions to the problems that affect us all.” [5] 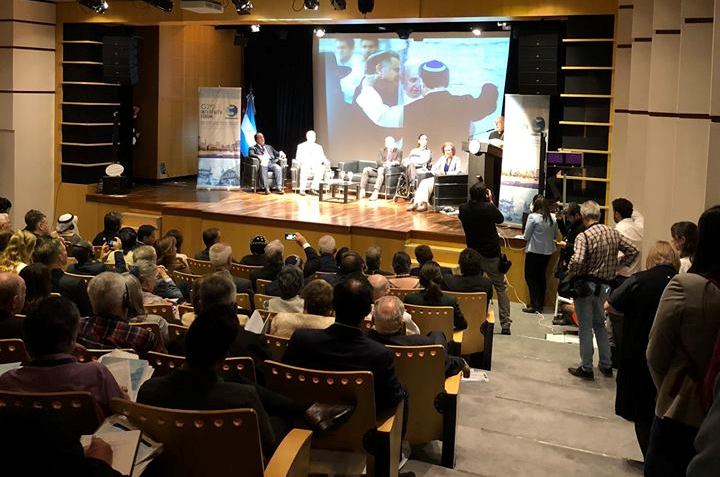 Pope Francis outlined his goals for the G20 Interfaith Forum.

Pope Francis also told this gathering of Seventh-day Adventists, Catholics, Protestants, Jews, Muslims and pagans, that we are one family.

“Called into being by one Father, all of us are linked by unseen bonds and together form a kind of universal family, a sublime communion which fills us with a sacred, affectionate and humble respect.” [5] 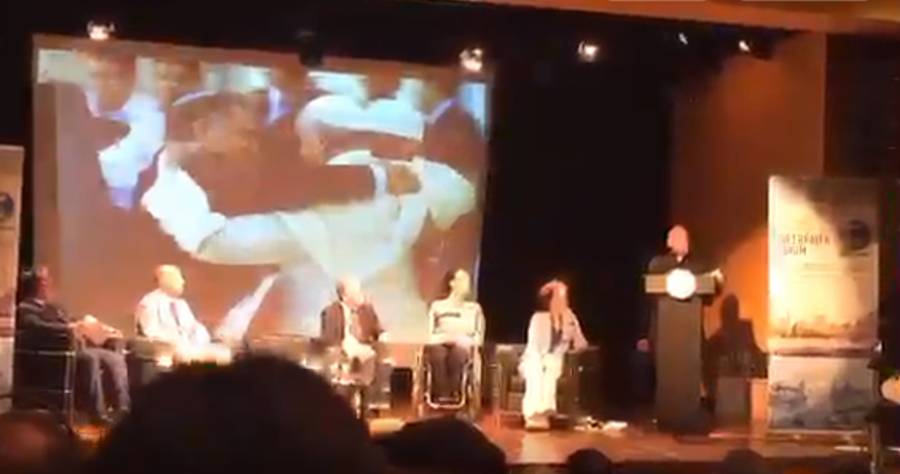 Pope Francis emphasized again and again that we need to sit down and talk things over in order to work out our misunderstandings.

“Dear friends, I wish to renew once again, and before this very distinguished assembly, my call to protect our common home through concern for the whole human family. An urgent invitation to a new dialogue on how we are building our society, in the search for sustainable development in the conviction that things can change.” [5] 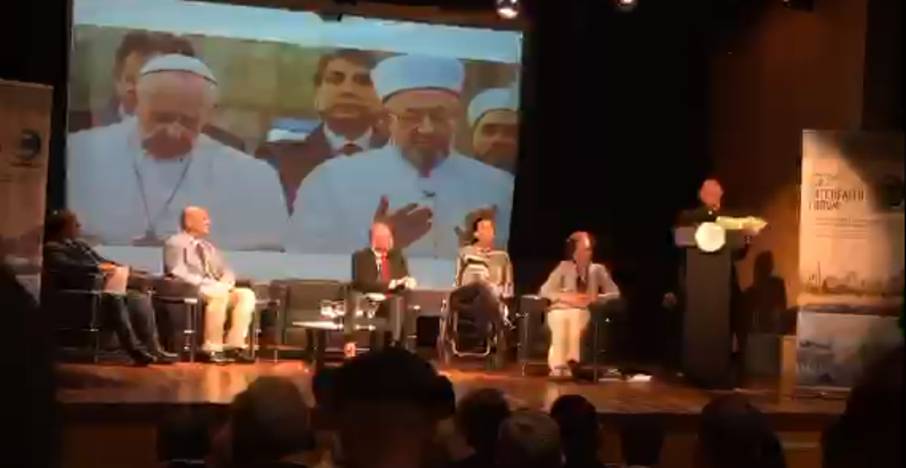 Pope Francis concluded by stating that the only way to achieve a just, peaceful and sustainable universe is when the churches collaborate together.

“Please allow me to conclude by recalling once again that we are all necessary for this task, and that we can collaborate together as God’s instruments to protect and care for creation, each one contributing their culture and their experience, their talents, and their faith.” [5] 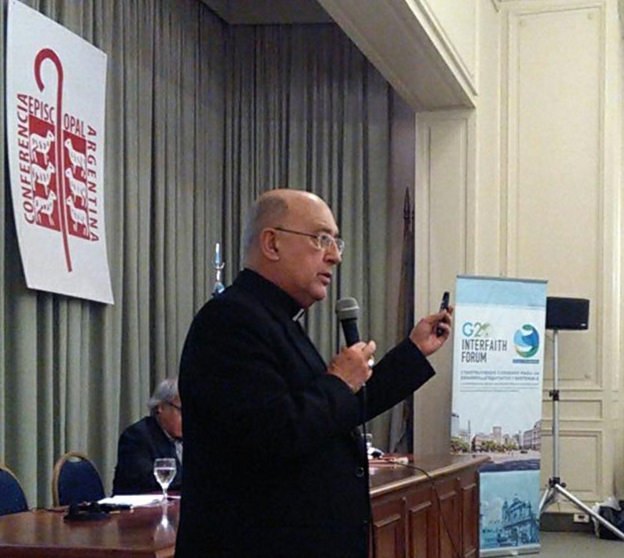 Jesuit Cardinal Pedro Barreto S.J. is a Roman Catholic Cardinal and Archbishop of the city of Huancayo, Argentina. He is also a top Jesuit in Argentina. [6] This Jesuit leader not only attended the G20 Interfaith Forum but he also addressed the interfaith religious gathering. [7] He is standing next to the G20 Interfaith Forum banner and the Argentina Episcopal Conference (Catholic Bishops’ Conference) logo. 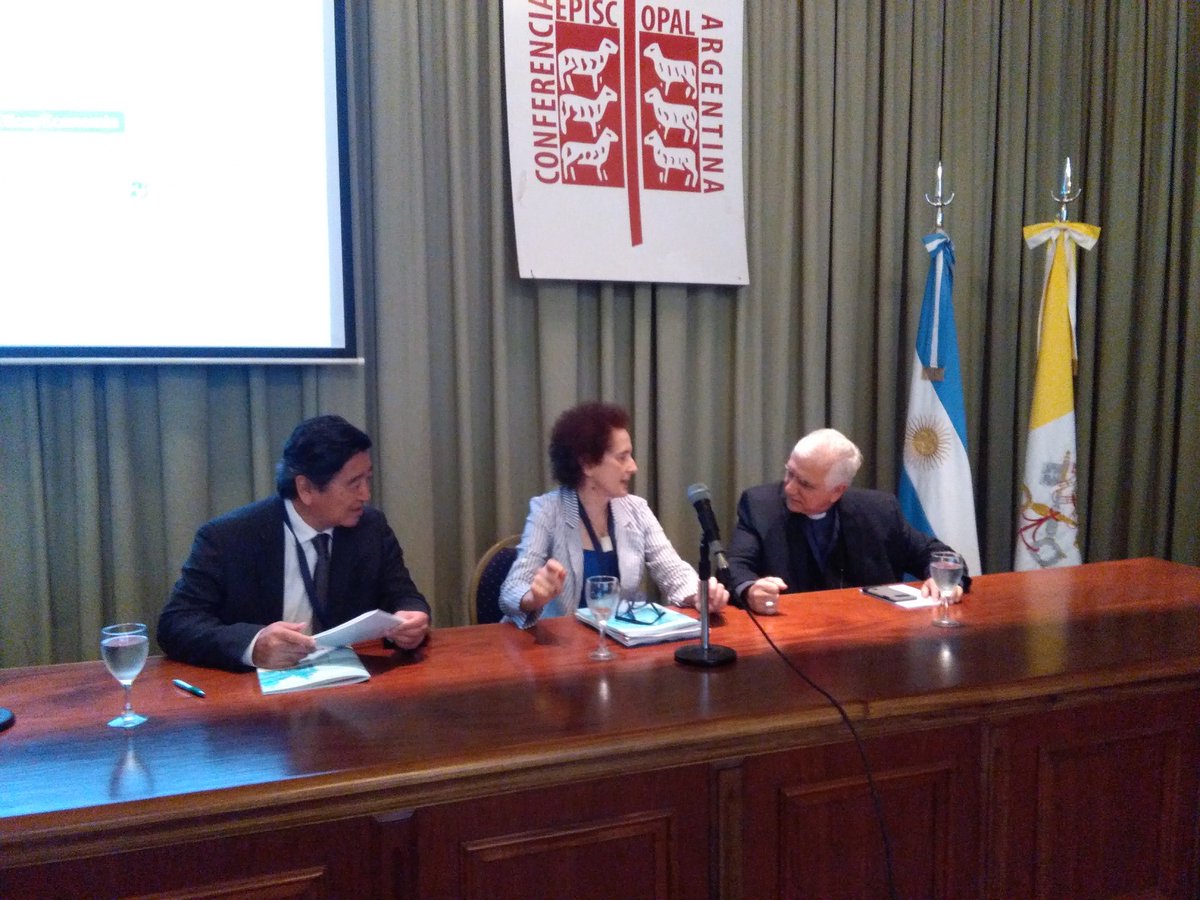 In the above photo we see Roman Catholic Archbishop Jorge Lozano during the start of the the “4th High Level Dialog.” [8] It is very revealing how this “high level” dialog between the top religious faiths is being conducted. We see Rome’s agent (the archbishop), the logo for the Catholic Church in Argentina and the Vatican flag next to the flag of Argentina. There should be little doubt about who is behind all of these “high level” talks. 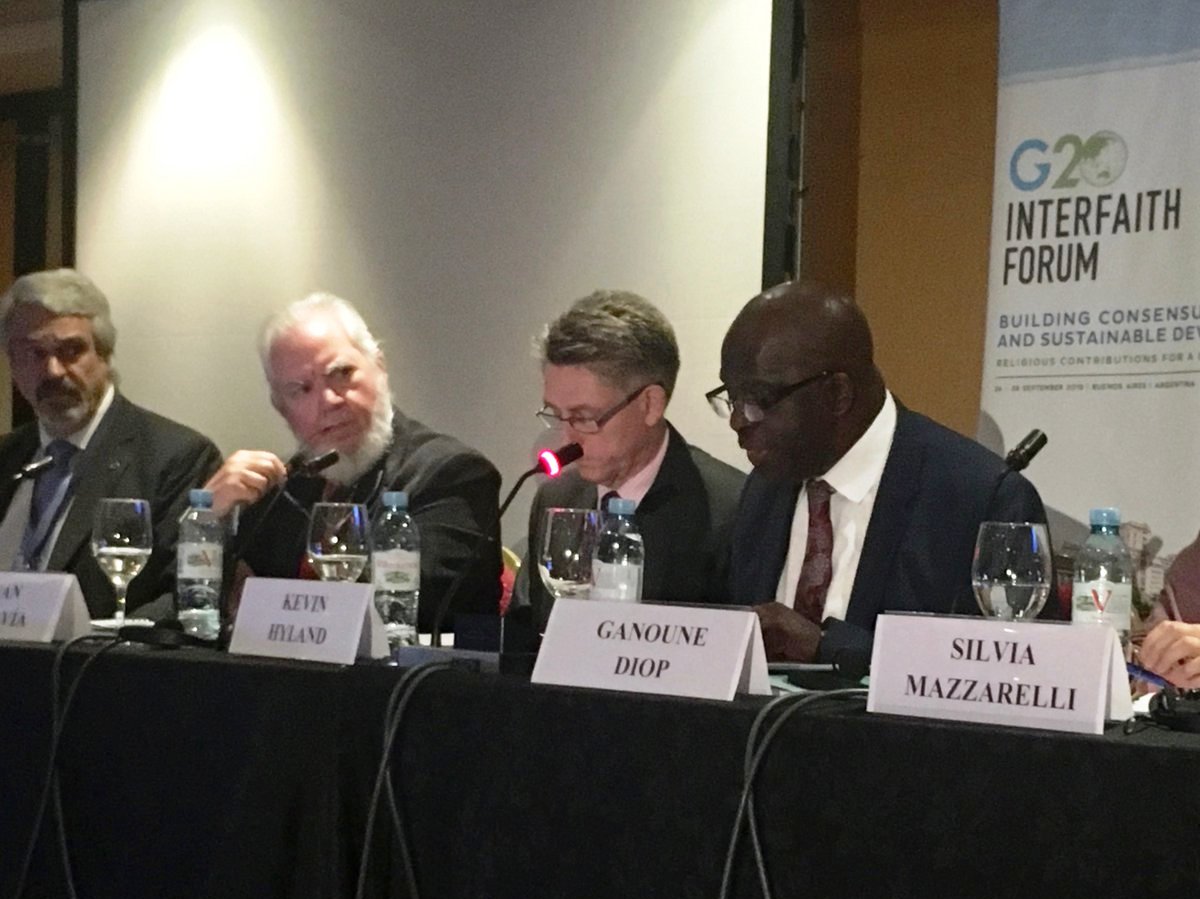 Representing the Seventh-day Adventist Church was Ganoune Diop. He not only attended, but he was also a featured speaker during one of the sessions at the G20 Interfaith Forum. In the above picture Diop is actually sitting in front of the G20 Interfaith Forum’s banner. Make no mistake, Seventh-day Adventists have been participating in these high level meetings with Roman Catholics/Jesuits for many years. “Oh, but we are promoting religious liberty,” we are told. Ganoune Diop didn’t even mention the word “religious liberty” in this September 26, 2018 session. He spoke about protecting the rights of immigrant children. [9]

The Stage is Being Set

“Those who become confused in their understanding of the Word, who fail to see the meaning of antichrist, will surely place themselves on the side of antichrist” (Bible Commentary, Vol. 7, p. 949).

The handwriting is on the wall. The Vatican has affirmed its duty and role to lead out in bringing changes to our world, and these changes will come about when all the churches unite together as one. We can clearly see Revelation 13 and Revelation 17 starting to take shape as Rome is busy fulfilling its prophetic role. 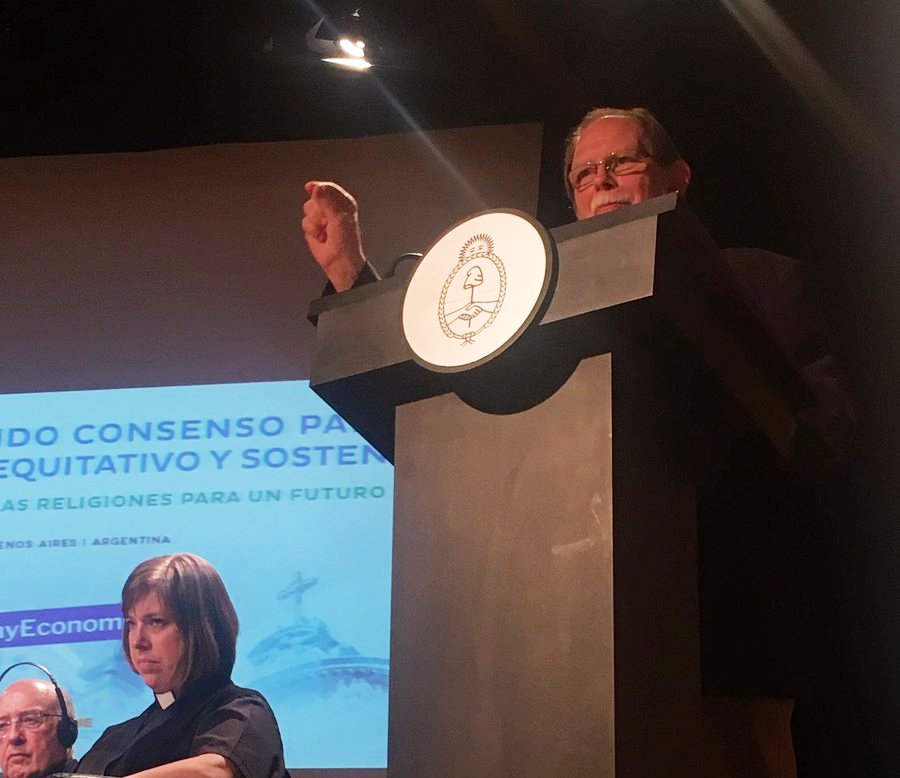 Chris Ferguson, Secretary General of the World Communion of Reformed Churches – a fellowship of 80 million Evangelical and Reformed Christians.

We cannot even begin to emphasize the danger of these interfaith/ecumenical encounters. Rome has been pushing interfaith dialog and ecumenical cooperation ever since Vatican II (1962-1965). They want to heal the deep divides that happened when the Roman Church was splintered. We will continue to watch the Catholic Church grow increasingly assertive in its efforts to expand its influence. She feels duty-bound to bring all churches back home to “Rome sweet Home” and to “heal” the disunion that was created centuries ago. This healing is prophesied in Revelation: 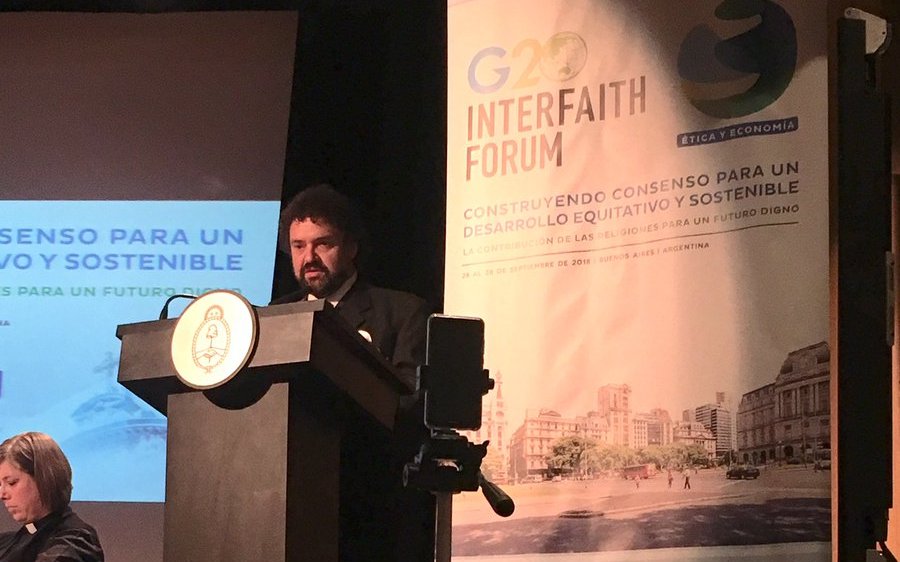 “I was shown the necessity of those who believe that we are having the last message of mercy, being separate from those who are daily imbibing new errors. I saw that neither young nor old should attend their meetings; for it is wrong to thus encourage them while they teach error that is a deadly poison to the soul and teach for doctrines the commandments of men” (Early Writings, p. 124).

We cannot build a society or even unite with those who are “daily” embracing “new errors.” What kind of foundation are we going to build upon when the churches are rejecting the principles of God’s word and His moral law? They are rejecting the Biblical views on marriage, gender identity and gender roles by redefining their own morality. They are overflowing in scandals and cover-ups with all the rampant child sex abuse and homosexual priests. Rome’s house is in complete disarray, yet they want to change our world? So what kind of society do they actually want to build? 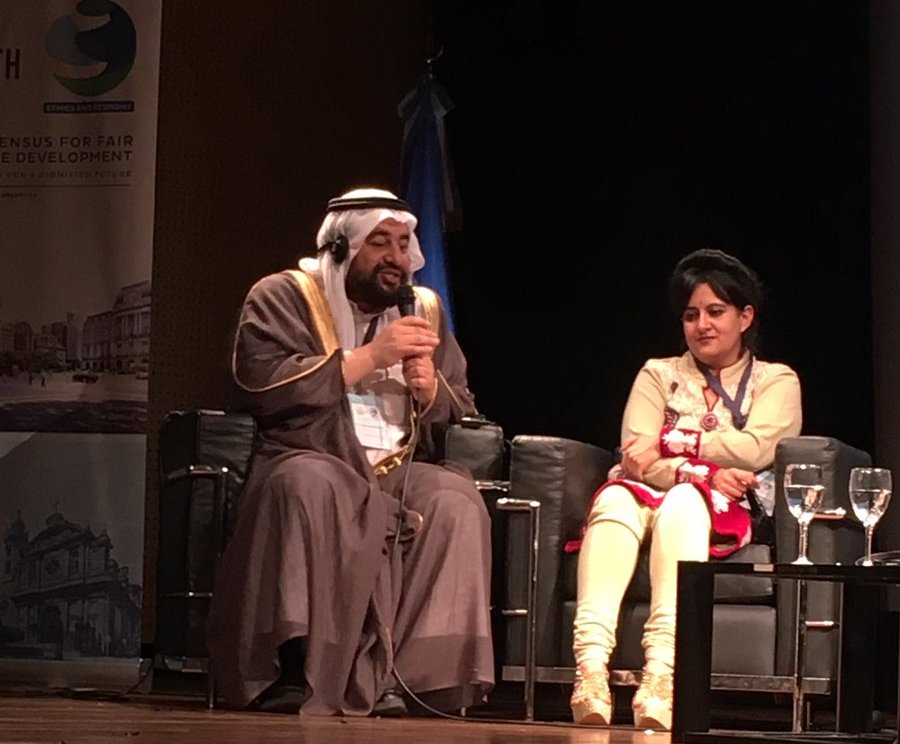 (1) Unity upon the word of God, (2) unity upon the truth, (3) unity upon the apostolic faith and (4) unity with the principles and foundations of the kingdom of heaven – this should be our Seventh-day Adventist “witness.” All of this talk of unity and cooperation today in these interfaith forums is never meant to include unity in faith and doctrine. In these gatherings men attempt to find the lowest common denominator (and it’s very, very low) that all the conflicting religions can accept, while glossing over the apostasy and the gross theological errors. They create this huge compromise all in the name of “love” and “unity.”

Unfortunately, love that is not truthful or Biblical can never lead to unity. And a unity that embraces falsehoods is actually enabling them. This is not love. Can we really continue to justify our presence in these interfaith forums that have not served anyone? Our world has only gotten worse. It is past time for God’s people to also rise up and fulfill their divinely, mandated work in this solemn hour of earth’s history.