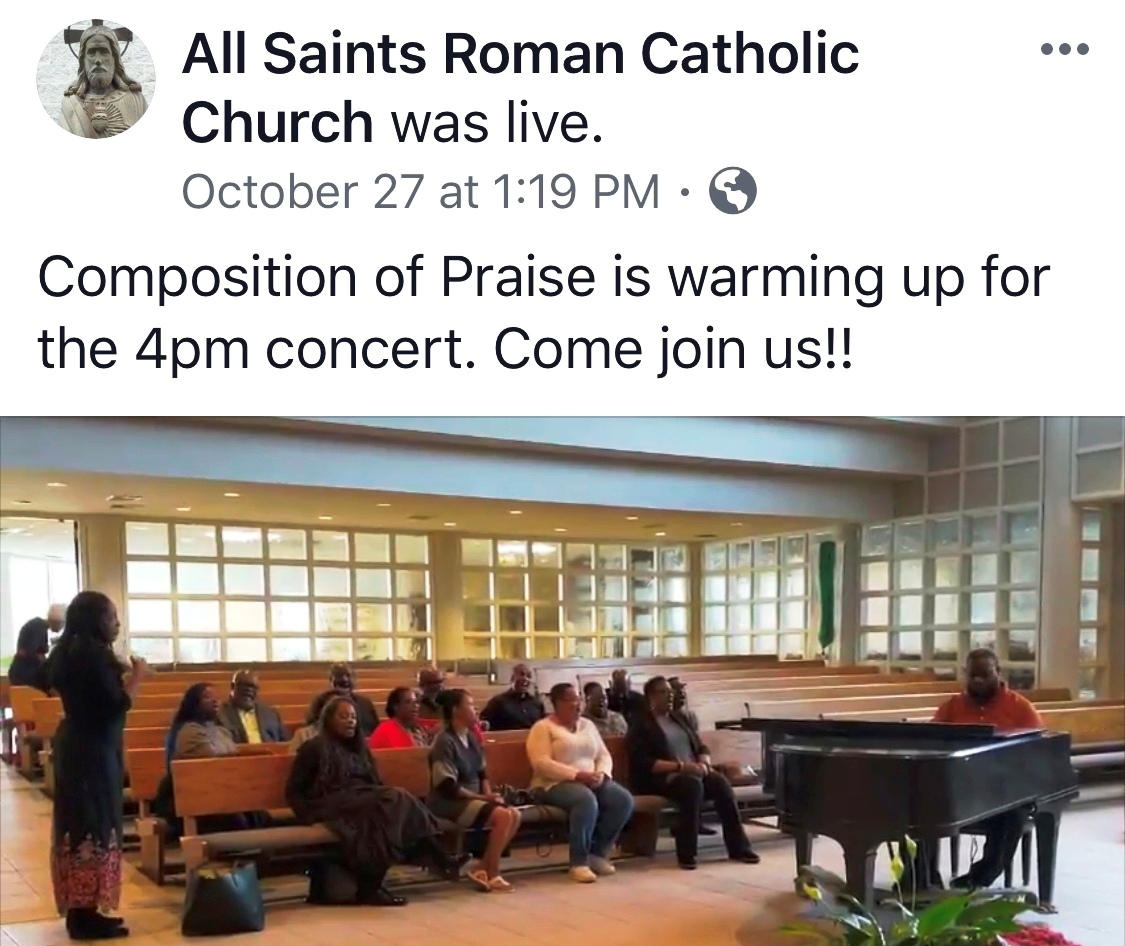 ‘Composition of Praise’ is warming up at All Saints Roman Catholic Church. [1] 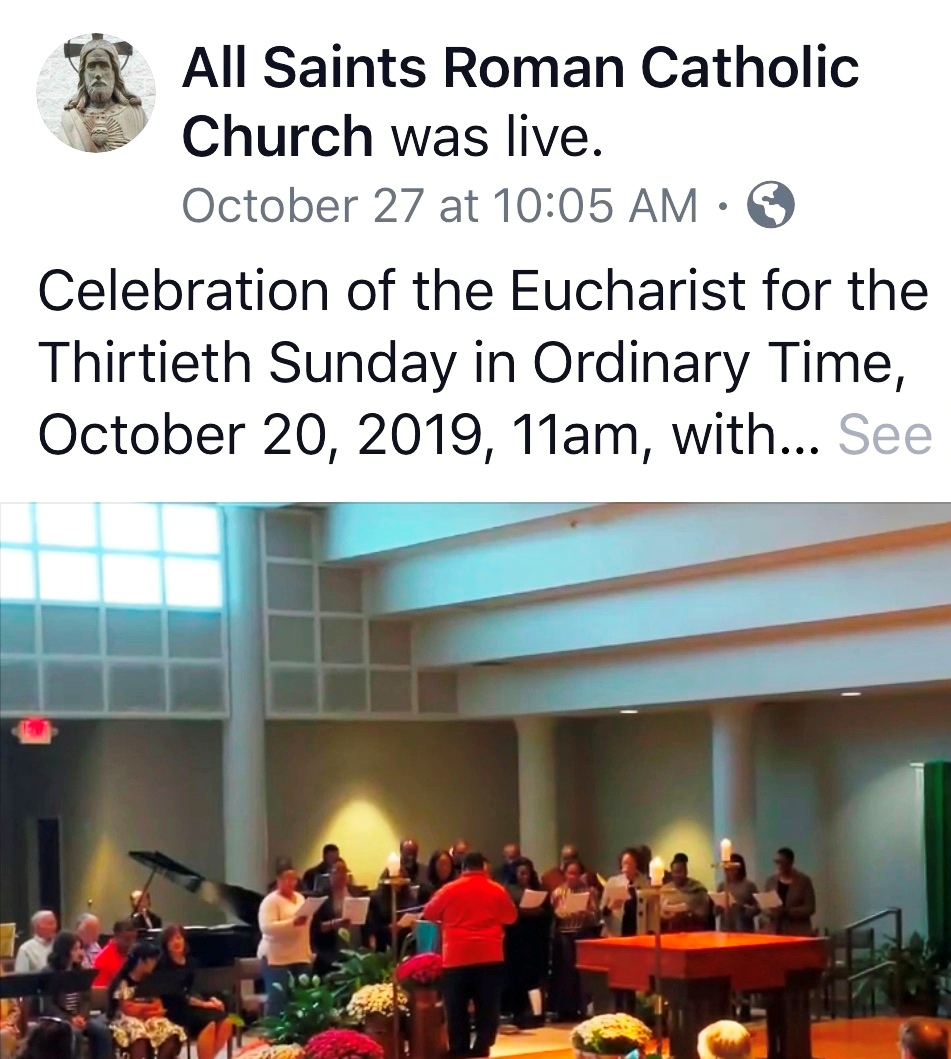 ‘Composition of Praise’ performs during the the “Celebration of the Eucharist” (Catholic Mass). [2]

An ecumenical choir complete with Seventh-day Adventist singers performed last month during the 11:00 a.m. Sunday morning Eucharistic mass celebration at All Saints Catholic Church in Bridgeport, West Virginia. The name of the internationally known, multi-faith musical group is called ‘Composition of Praise’ (CoP) and according to two different news reports this choir is comprised of Roman Catholic, Seventh-day Adventist and other Evangelical churches. [3] [4] 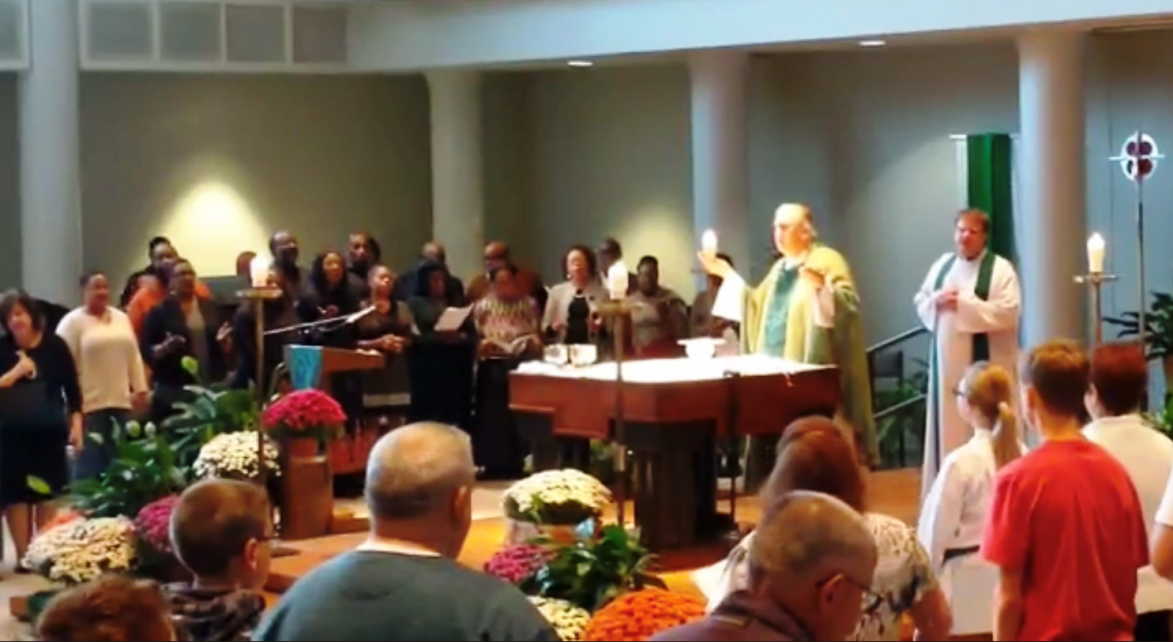 Not only does the Catholic Church’s Facebook page announce that this choir sang during mass, the secular news media also reported that Seventh-day Adventists performed during mass as members of the musical group. [4]  A one-world religious unity is being created to promote coexistence, pluralism and diversity. These ecumenical choirs exist to show that the different faiths are all equal. This interfaith musical group has the support of Rome, the Evangelicals and many Seventh-day Adventist churches. 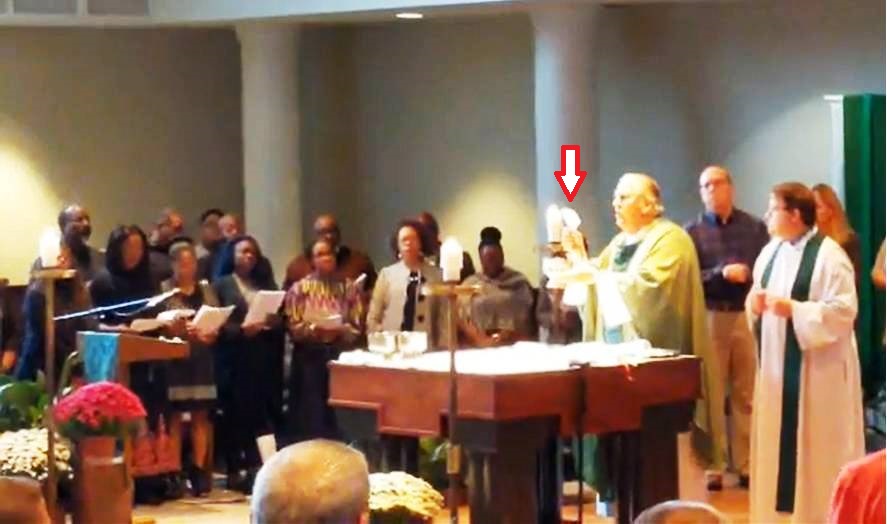 Father Benny Kapa holds up the Catholic wafer god and says, “Behold the Lamb of God” with the choir looking on (see program schedule below).

How do we know? Well according to their website, ‘Composition of Praise’ (CoP) is scheduled to perform in many of these churches across America. [5] So here we have a multi-faith choir made up of Catholics, Evangelicals and Seventh-day Adventists spreading an ecumenical message through music in Catholic, Evangelical and Seventh-day Adventist churches. The mission statement for this theologically conflicting and diverse musical group says:

“CoP’s mission is to help people of all faiths to understand the Word of God and build understanding, unity, and love, through music.” [6] 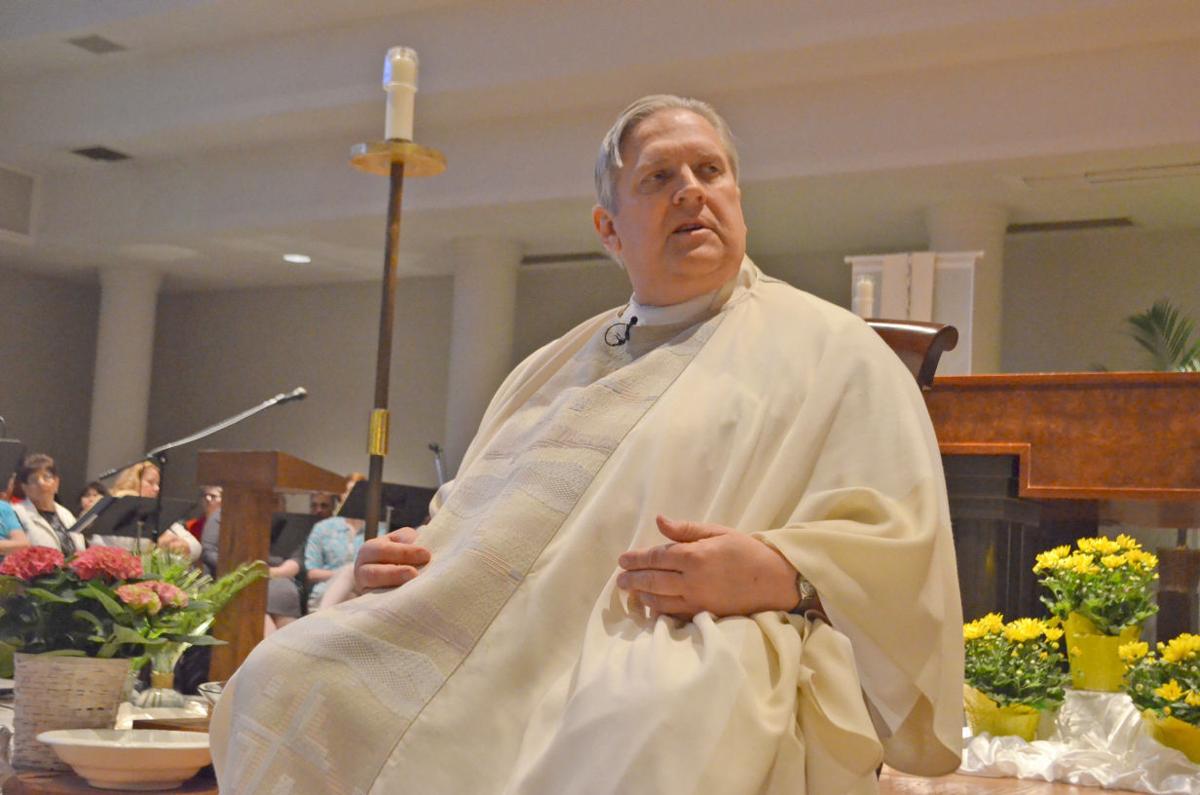 They are helping people understand God’s word? What part of God’s word? Roman Catholic mass? The immortality of the soul? Sunday sacredness? Their message seems to be that all faiths are the bearers of the same ecumenical gospel since no one church possesses all truth.

The Program at All Saints Catholic Church

But what is most concerning is the following video of the entire Sunday morning Eucharist Celebration (mass) at All Saints Catholic Church in Bridgeport. [7] The video is a little over 1 hour and you will see both the Catholic Priest Benny Kapa and the ecumenical choir collaborating in this mass celebration – the Roman Catholic Church’s most central act of worship. Here is a breakdown of the video:

This is one of the reasons why millions of Bible-believing Christians were murdered during Rome’s Holy Inquisition. Protestants refused to worship the wafer (bread) as God Almighty. If you believed that the bread and wine only symbolized Christ’s blood and body you would have been declared by Rome to be a heretic and they would have burned you at the stake. That’s what Roman Catholic Canon law says – and still does!

Unbelievable! Do you believe that our Protestant forefathers would have stayed, participated or sung in this Eucharistic Catholic mass? What about our Seventh-day Adventist pioneers? Sadly, this is what 60 years of ecumenism has done to us. It is bringing us to Rome. Millions of sincere Christians, including Seventh-day Sabbath-keeping Waldensians gave their lives for the Apostolic/Protestant faith during the Dark Ages and during the Protestant Reformation. Why? Because they refused to bow to Rome. Are we to imagine that they died in vain? Absolutely not.

Please contemplate the gravity of the following warning. Here are the two groups that are now being developed within the church:

“I saw the nominal church and nominal Adventists, like Judas, would betray us to the Catholics to obtain their influence to come against the truth. The saints then will be an obscure people, little known to the Catholics; but the churches and nominal Adventists who know of our faith and customs (for they hated us on account of the Sabbath, for they could not refute it) will betray the saints and report them to the Catholics as those who disregard the institutions of the people; that is, that they keep the Sabbath and disregard Sunday” (Spalding and Magan Collection, p. 1).

When we do any of these we are not just betraying the Apostles, the Reformers or the faithful Remnant people – oh no. We are betraying the God whose hand has been guiding these movements away from Rome throughout history: