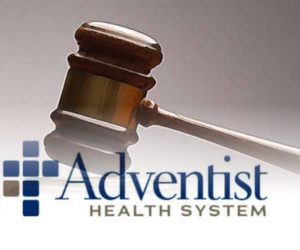 Adventist Health System [AHS] doesn’t appear to like its name. After 45 years, the healthcare giant has announced that it will be rolling out its new name “AdventHealth” on January 2, 2019. [1]

AHS is the largest Protestant, faith-based healthcare organization in the world employing 80,000 professionals. It is well-known throughout the healthcare industry as a leader in quality care and services.

However, after a series of recent financial scandals, accusations of fraud, lawsuits, fines and out-of-court settlements totaling in the hundreds of millions of dollars, one has to wonder if maybe the name “Adventist Health System” hasn’t already become permanently tainted – resulting in this new corporate name change.

The following fraud cases are just a few examples of those that were settled between Adventist Health System and the US Department of Justice [DOJ]. These references are made available, not by the news media, but by the DOJ itself.

These and other out-of-court settlements do terrible damage to any corporation’s reputation. Sadly, the media did run negative stories on these reports. [6] And one of the benefits in adopting a new name change is that the church will be able to distance itself from the legal disasters created under the old “Adventist Health System” name. In a few years the AHS name will be a thing of the past. Customers and patients will visit the hospitals and not even realized that the embattled health care system hasn’t disappeared at all; it has only changed its name.

It’s like getting a fresh, new start and/or a rebaptism when you change your name. Maybe customers will forget all about the troubled and sketchy past. With the new “AdventHealth” name, we will enhance our image once again. Well, maybe….just as long as we don’t catch another one of those devastating fraud cases by the US Department of Justice.

So, will adopting a new name work to rebrand our reputation? No. Will adopting the world’s method of healing give us a good name in the eyes of the world? Not likely. Will health-care alliances with Rome help us to stay afloat financially? Don’t count on it. There are only two choices we can make that will restore our good name and reputation with regards to the health work. God has set before us two options.