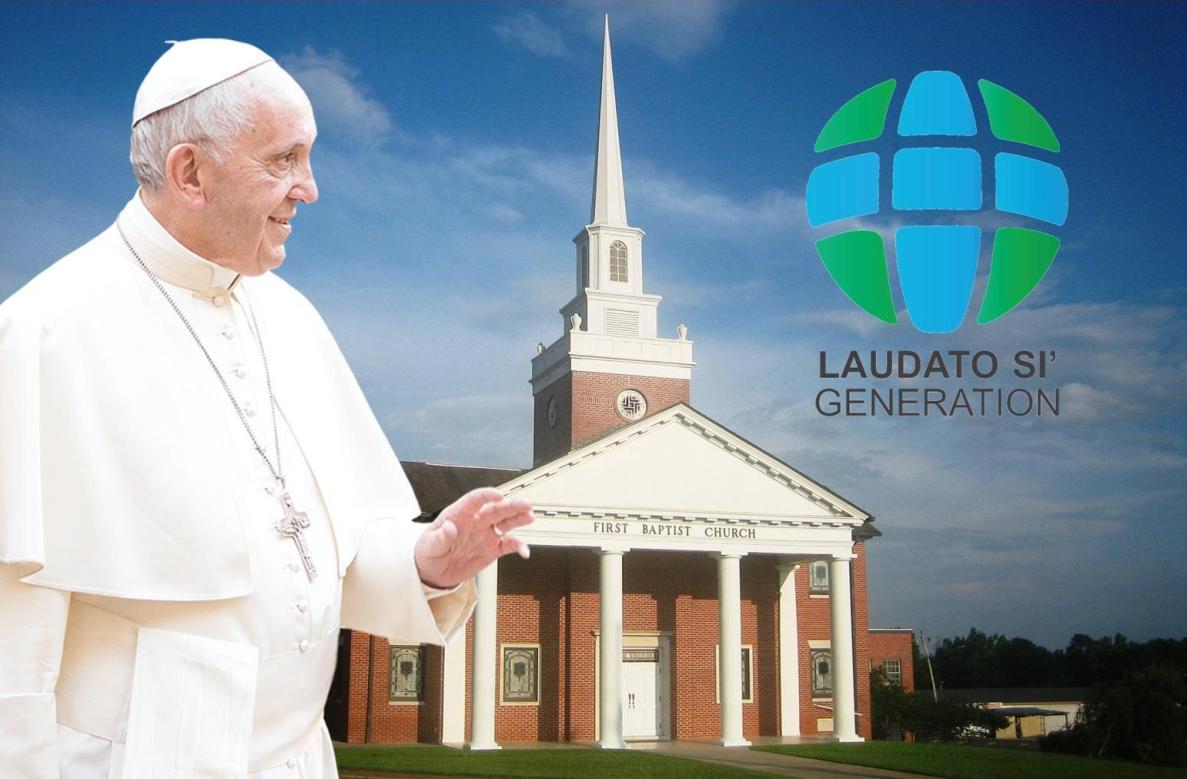 The Baptist Message (BaptistMessage.com) is an online news source serving “the Southern Baptist family” and the general “public.” [3] Earlier this year, they published an article questioning whether the Covid-19 shutdowns weren’t so bad after all, considering the positive environmental impact they claim it brought. The article is entitled “A Radical Environmental Proposal: A Day of Rest” and states the following:

A weekly day of rest could help keep the balance in the environmental system that God established to sustain man’s physical existence. Scientists have made multiple serendipitous discoveries about the impact of shutdowns around the world during the novel coronavirus pandemic:

Today, Baptists are arguing that Sunday may be the solution to our environmental problems. This is the same message found in Pope Francis’ encyclical Laudato Si’.

So, what if a lockdown on major activity was sustainable for a time each year – just not all at one time? What if the interruption was only one day each week? Could something as simple as observing one day of rest for every six days of work make a difference in air quality and thus reduce the dire ecological impacts from pollution that many scientists predict for our world?

As for the economic impact on businesses from being closed one day of the week — Chick-fil-A has done quite well by closing on Sundays, generating more sales per store in six days than its three closest competitors, combined, achieve in seven. A day of rest is not a solution for the proliferation of plastics in the oceans, etc. But when it comes to reducing airborne pollutants, one day off in seven seems to more than make sense, it is wisdom from above. [4]

In other words, a weekly Sunday lockdown is good for the environment and good for the economy. Here we see Baptists promoting the Roman Catholic view of the “common good,” which basically says that the views of the minority (seventh-day Sabbath worship) should be sacrificed for the good of the majority (Sunday worship). This actually happened in the days of Jesus. Jesus was sacrificed for the “common good” of the majority:

“Then gathered the chief priests and the Pharisees a council, and said, What do we? for this man doeth many miracles. If we let him thus alone, all men will believe on him: and the Romans shall come and take away both our place and nation. And one of them, named Caiaphas, being the high priest that same year, said unto them, Ye know nothing at all, nor consider that it is expedient for us, that one man should die for the people, and that the whole nation perish not. And this spake he not of himself: but being high priest that year, he prophesied that Jesus should die for that nation.” John 11:47-51.

The chief priests and the Pharisees were afraid of Rome. Nothing has changed in 2,000 years, because today the whole world is also afraid of Rome, including our people. And to please Rome, God’s people, the Jewish nation, determined that in order to preserve the common good and retain their place and nation, it was necessary to eliminate Jesus. History repeats itself. This is exactly where our world is heading.

But here is the problem with the common good, the Sunday rest laws and the fear of Rome. The Bible tells us to “Fear God, and give glory to him; for the hour of his judgment is come: and worship him that made heaven, and earth, and the sea, and the fountains of waters.” (Revelation 14:7). This is a call to embrace God as the Creator. It is a call to worship and honor the One who created heaven and earth. It is a call to embrace the seventh-day Sabbath, a monument to both the Creator and creation.

If we are going to speak of a day of rest for humanity or for creation, we must first recognize that in Christ all things were created (Colossians 1:16, 17), and without Him nothing that exists was made (John 1:1-3). We must also recognize that whenever we speak of the Sabbath, we are speaking of the rest of the Creator (Genesis 2:1-3). Since God created the Sabbath, only He knows for what purpose He made it:

“And he said unto them, The sabbath was made for man, and not man for the sabbath: therefore the Son of man is Lord also of the sabbath.” Mark 2:27, 28.

Only Jesus can tell us which day is the Sabbath, what it is for and how we can keep it. Any statement made by men or by the church about which day is the true Sabbath rest or how we honor the Creator is just man-made additions to God’s word. Human ordinances, human decrees and human encyclicals will always be wrong. Only the Word of God should be our guide. Whoever clings to the Holy Scriptures and is taught by God, can never be wrong.

While the entire world fears the beast of Revelation and lines up to embrace the common good (the mark of the beast), God will have a people who will keep His commandments, not man’s (Revelation 12:17, 14:12, 22:14). The time is coming, and is here, when all human and papal traditions will exalt human wisdom (2 Thessalonians 2:4) and give glory to man in the highest (a violation of Luke 2:14) by exalting the false day of Sun worship (Ezekiel 8:16) above the commandment of God that says: “Remember the Sabbath to keep it holy” and “the seventh day is the sabbath of the Lord thy God” (Exodus 20:8, 10).