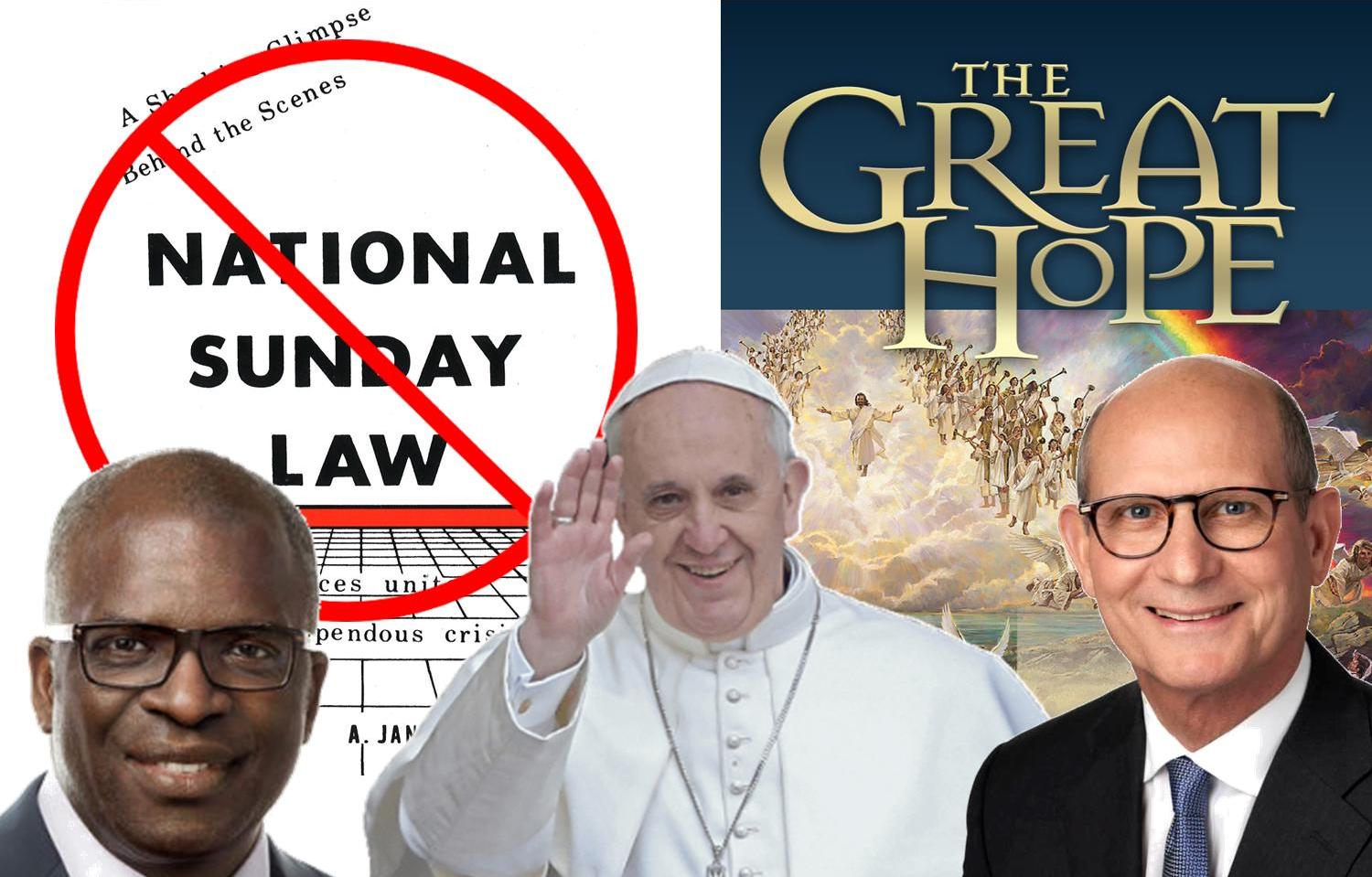 Are our leaders standing with Rome or with the Remnant?

“I have been shown that Satan is stealing a march upon us. The law of God, through the agency of Satan, is to be made void. In our land of boasted freedom, religious liberty will come to an end. The contest will be decided over the Sabbath question, which will agitate the whole world.” (Evangelism, p. 236).

NZ Catholic is New Zealand’s only national Catholic newspaper and is published by the Roman Catholic Bishop of Auckland. Back in March 25, 2021, the NZ Catholic attacked the National Sunday Law book by calling it “anti-catholic” and told people to trash it. [1] Then on March 30, 2021, the NZ Catholic renewed its attack on the National Sunday Law book and countered its message by calling people to “rest” on “Sunday” and “worship the Lord” on the first day.

They published an article titled “Discard Nonsense but Keep the Lord’s Day.” The message is that we should discard the truth about the seventh-day Sabbath that is mentioned in the National Sunday Law book and instead keep Sunday as the Lord’s Day. The Catholic publication stated:

“Many Catholic households will have received, in their letterboxes, a booklet titled ‘National Sunday Law’ — and many of those households will have done with it what Fr Mervyn Duffy, SM, suggested; consigned it forthwith to the recycling bin. Fr Duffy, in comment for NZ Catholic, rightly described the contents of the pamphlet as ‘nonsense’.” [2]

“Sunday Mass is the ‘great Sabbath prayer of the Church,’ and that the Second Vatican Council fathers wanted to intensify Catholics’ experience of the liturgy on ‘the Lord’s Day’.” [2]

“What a tragedy when we contribute ourselves to the secularization of the Sabbath, when we treat Sunday like any other day.” [2]

“After issuing a reminder that the Third Commandment is not a suggestion, Fr Barron had some suggestions for Catholics to ‘reclaim the Sabbath.’ First, attend Mass, and encourage others to do so too. And then try to make Sunday different — by, for instance, reading a religious book, praying alone or with others, going for a meditative walk, praying the Rosary, or reading the Bible, especially the readings for the Mass on that day.” [2]

So here we can clearly see what the controversy is over. It is not over a book or the author. It is about the Third Angel’s Message and the observance of the Fourth Commandment, the seventh-day Sabbath. It is about the future mark of the beast, when Sunday rest is imposed by law. And the tragedy is that the Seventh-day Adventist Church has not only disavowed the National Sunday Law book and the message it contains, but has not said one word in defense of God’s seal, the seventh-day Sabbath. The official response from church leaders has been paralysis, fear, silence, and dare we say cowardice. [3]

Today, we have leaders who cannot even publicly affirm the basic biblical truth that Sunday is the mark of apostasy. [4] What is more fundamental to Seventh-day Adventists than the question of Saturday versus Sunday? It’s in our name: Seventh-day Adventist! So why the disappointing silence on the part of many leaders? Unfortunately, they have to maintain their earthly reputation. The world loves them too much and they don’t want to disappoint anyone (except God). We have reached a point in Adventism where we are far more eager to be well received by the masses than to stand alone for Christ.

Like song #610 says in our Adventist hymnal, I would much rather “Stand Like the Brave.” Notice what is in our hymnal:

The cause of thy Master with vigor defend;
Be watchful, be zealous, and fight to the end;
Wherever He leads thee, go, valiantly go,
Then stand like the brave, with thy face to the foe. [5]

This is in our hymnal. But instead of standing like the brave faithful Seventh-day Adventists in New Zealand who are sharing our message and doing what needs to be done, many church leaders do nothing, say nothing and sacrifice nothing for the truth. They sit comfortably at home. And when the world asks them about the National Sunday Law book, they hide under their desks and assume the fetal position.

“Stand like the brave!” Perhaps this should be a required song that every pastor needs to sing. Perhaps this hymn should be the theme song of the next General Conference Session. I would rather stand in solidarity with one brave Seventh-day Adventist than with a thousand silent ones who never speak out and never risk anything for Jesus Christ. At least we know where the one brave soul stands. That brave soul is not ashamed of the everlasting gospel or the Three Angels’ Messages. They stand up for what they believe in. And the rest? What about the majority? You never know where they stand, and when a little pressure is applied, they cut and run.

It is disappointing that some our leaders today would rather stand in solidarity with the United Nations, abortionists, ecumenists, feminists, globalists and with Rome’s universal fraternity. We are joining the very ones who despise the Sabbath of the Lord and the Three Angels’ Messages. These are the same ones who are promoting Sunday as the day of “rest”  and the day to “worship the Lord.” Is this what Adventism is being reduced to?

The only good news is that even as our faith is under attack in New Zealand and while our truth-filled books are being burned and thrown away and while the voice of opposition is calling for Sunday to be kept holy, there will be “a very small remnant “who will refuse to sit by and do nothing. There will be “a very small remnant” who will fearlessly proclaim Adventist truth in all its fullness. And I don’t know what you are going to do, but as for me and my house, we will serve the Lord and show solidarity with the “very small remnant.”

To support the National Sunday Law book project in New Zealand that is currently in operation and under attack visit http://www.nslproject.org/specifics/

To support the National Sunday Law book project in the United States that is constantly being attacked, call Pastor Jan Marcussen’s office: 618-627-2357.