Freedom of worship is one of our most cherished liberties that must be protected. For more than 120 years, Seventh-day Adventists have worked to defend and advance the cause of religious liberty. This longstanding, time-honored work is one of the great pillars of Adventism. This Sabbath, January 25, 2020 is “Religious Liberty Sabbath.” [1] A special offering will be collected in every Seventh-day Adventist church world-wide for the work of religious liberty. A special reading will be made highlighting the great work that is being done by the Religious Liberty Department. 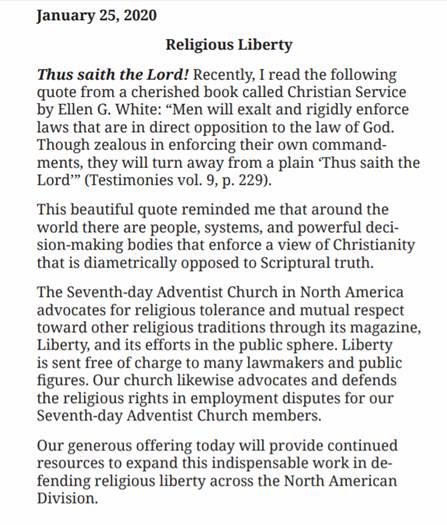 It seems quite clear that there is an effort prevailing in the Religious Liberty Department of the Seventh-day Adventist Church that is encouraging a stronger relationship with the Roman apostasy. Some religious liberty leaders are engaging in joint worship services, multi-faith bridge-building efforts and interfaith unity with Rome. Other pastors and leaders are partaking in the Eucharistic mass with other faiths [3], some are singing Latin Mass songs and attending special accredited Catholic seminaries approved by the Holy See. [4] These activities diminish the significance and the urgency of Revelation 14:8 and Revelation 18:3-5. [5]

“Can anybody give a reason for this change in the feeling of Protestants toward Catholicism? Was it all just a senseless ‘panicky feeling,’ when the Waldenses and Albigenses used to tremble at the approach of the minions of the Pope? Was Luther’s feeling toward the Pope nothing but jealousy? Did Huss and Jerome, and tens of thousands of others whom we call martyrs,—did they commit suicide? Was it foolish superstition on the part of the Lollards, when they used every means in their power to conceal their Bibles, so that the agents of the Pope might not burn them? In short, must we say that the Reformation was a mistake, and that the men who stood so firmly for principle were nothing but cranks? If not, why should there be any change in feeling towards Rome?”

“When Protestants cease to protest, they might as well be Catholics. We hold that Protestantism today ought to stand in the same relation to Catholicism that it did in the days of the Reformation. That does not mean that we should hate Catholics or that we should have any feelings towards them other than those of Christian charity and courtesy; but it does mean that we should protest against the principles and practices of the Church of Rome, and not be dazzled by its display of wealth and power.”

“We warn the people of America that degenerate Protestantism, which comprises nearly all the Protestantism that now exists, is about to sell their liberty to the Church of Rome. Let every true man keep his eyes open to discern. the signs of the times” (“Another Sign of the Times” by E. J. Waggoner, American Sentinel, March 1888, Vol. 3, No. 3, page 5). [6]

Now read what A. T. Jones wrote about the Babylonian “family”:

“They are seeking an alliance with Rome herself. And when these professed churches of Christ shall have formed their illicit connection with worldly power, they will have thus turned themselves into a band of harlots committing fornication with the powers of earth, as did their harlot mother before them. And then the inspired description of Babylon the Great will be complete: ‘Upon her forehead was a name written, MYSTERY, BABYLON THE GREAT, THE MOTHER OF HARLOTS AND ABOMINATIONS OF THE EARTH.’ Rev. 17:5. Let not the professed Protestant churches blame us for this application of the Scripture. They themselves have acknowledged the Church of Rome as their mother, and they need not blame us if we call attention to the Scripture description of the family” (“The American Sentinel and the Churches” by A. T. Jones, American Sentinel, December 1888, Vol. 3, No. 12, page 1). [7]

“By proofs abundant it has been shown in these columns (American Sentinel), and demonstrated in their own actions, that the professed Protestant churches of the United States are completely apostate, and are joined in principles and in practice to Rome” (A. T. Jones, American Sentinel, September 14, 1893, Vol. 8, No. 36, page 1). [8]

To compare the modern day religious liberty work to the noble efforts of our pioneers is almost blasphemy in the eyes of the Lord. Our pioneers warned against the real dangers to religious liberty – Rome. They taught us that the principles of Protestantism and Romanism are direct opposites. They warned us that Rome would one day completely subjugate Protestantism. It’s happening! When did A.T. Jones or E. J. Waggoner participate in an interfaith worship service with Rome? What relationship did they have with the Catholic mass?

Who will guard the unfettered ideals of Protestantism and liberty if we continue to pursue these interfaith partnerships? Who will defend our core values and preach the final warning messages against the beast and its image? Who will stand up for truth if the watchmen are laying down their weapons and embracing a false ecumenical message of peace and safety?

The religious liberty work today is in danger of becoming an incubator for ecumenism. This sacred ministry is being hijacked. There is a war raging in the church today that is attempting to eradicate our Protestant/Adventist heritage. There seems to be new attitudes, new agendas and new theories regularly being forced upon us from every direction, even as our historic message is being undermined.

The Remnant Church is supposed to be the champions of God during the final conflict in the 6,000 year-old battle between truth and error. Why are we afraid to lovingly share the final warning messages? Why are we surrendering during the heat of the battle? Why do we allow our present truth messages to be suppressed? Seventh-day Adventists are supposed to be the best and brightest students of Bible prophecy – revealing the truths from God’s word to this generation.

We have the Bible, the Spirit of Prophecy, sacred history, Bible concordances, Greek Bibles, Hebrew Bibles and so many other resources that our predecessors did not have. We ought to be the cream of the crop when it comes to shinning the light from the throne of God to this dark, unbelieving world. But I will submit to you that this generation of Seventh-day Adventists are the most culturally conformed, the most lukewarm and the most prophetically silenced generation in the history of the 6,000 year-old controversy.

The religious liberty work was designed to strengthen our witness (Three Angels’ Message) in the world. But the opposite can also be true. If this sacred ministry is being used to passively or actively bring us into the fellowship of Rome and diminish our unique mission and message then how can we silently stand by and witness the slow death of such an important ministry by those who should protect and defend it?

If the offerings collected during “Religious Liberty Sabbath” are going to be used to fly leaders to Rome for interfaith unity with the Pope or to other multi-faith worship services, then we need to stop collecting these offerings. Stop wasting God’s money on “religious liberty” activities that will hinder the progress of the Three Angels’ Message. Stop using funds to help build up Rome’s influence during the global/political end-time drama.

“The banner of truth and religious liberty held aloft by the founders of the gospel church and by God’s witnesses during the centuries that have passed since then, has, in this last conflict, been committed to our hands” (Acts of the Apostles, pp. 68, 69).

We have been given two banners – the banner of truth upon which is inscribed the commandments of God and the faith of Jesus; and the banner of religious liberty, which is to open the way so that we can share the truth of Revelation 14:6-12 to the world. We cannot and must not separate these two banners for they are one and the same work.