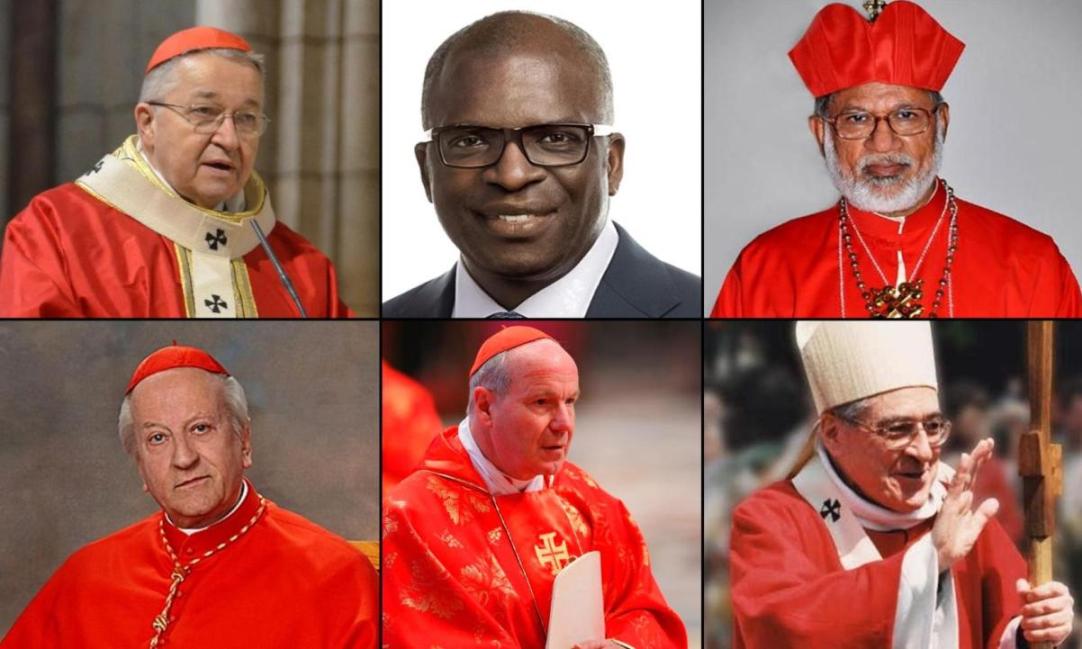 What does Ganoune Diop have in common with the top Roman Catholic Cardinals? They were all trained at the same theological seminary.

The truth is finally coming out. Just last week Ganoune Diop published a polemic essay defending the Seventh-day Adventist Church’s involvement in interfaith relationships with Roman Catholics and other churches. The article was circulated far and wide by the Adventist Review, a church-owned publication. In the article Ganoune Diop criticized with cruel and bitter vitriol all those who oppose his meetings with Pope Francis and the interfaith movement. [1]

It turns out that Ganoune Diop conveniently forgot to mention to the global readership of the Adventist Review that he is currently completing a PhD degree at a Roman Catholic seminary. So while Diop was defending the church’s interfaith relationship with Rome and while he was attacking Seventh-day Adventists for questioning those relationships, Diop failed to disclose a major, personal conflict of interest.

This personal conflict of interest compromises him and calls into question whether his report in the Adventist Review was even objective. At a minimum, Ganoune Diop gave an appearance of impropriety by attacking Seventh-day Adventists who oppose interfaith relationships with Rome while at the same time being a member of a Roman Catholic school community. For this he should apologize.

Another possible scenario is that Ganoune Diop purposely misled the readers of the Adventist Review when he argued that we need to “mingle” with the leaders of other churches when in fact Diop is currently in a teacher/student relationship at a Roman Catholic seminary. This is not mingling; this is “nurturing.” Diop is a pupil and he is being trained, disciplined and indoctrinated by the agents of Rome. This makes his report in the Adventist Review dishonest, biased and unfair. It makes his attacks against faithful Seventh-day Adventists repugnant and scandalous. He ought to do the honorable thing and apologize. Then he should resign.

Conflicts of interests, appearances of impropriety and unjust vitriolic attacks in our publications give rise to suspicion and a loss of confidence. It is best to avoid these situations altogether. Those who work at the General Conference are not a law unto themselves. They work for the world-wide church and they are supposed to be servants of the people. Or maybe the plan is to sweep all this under the rug and hope that in time people will forget? 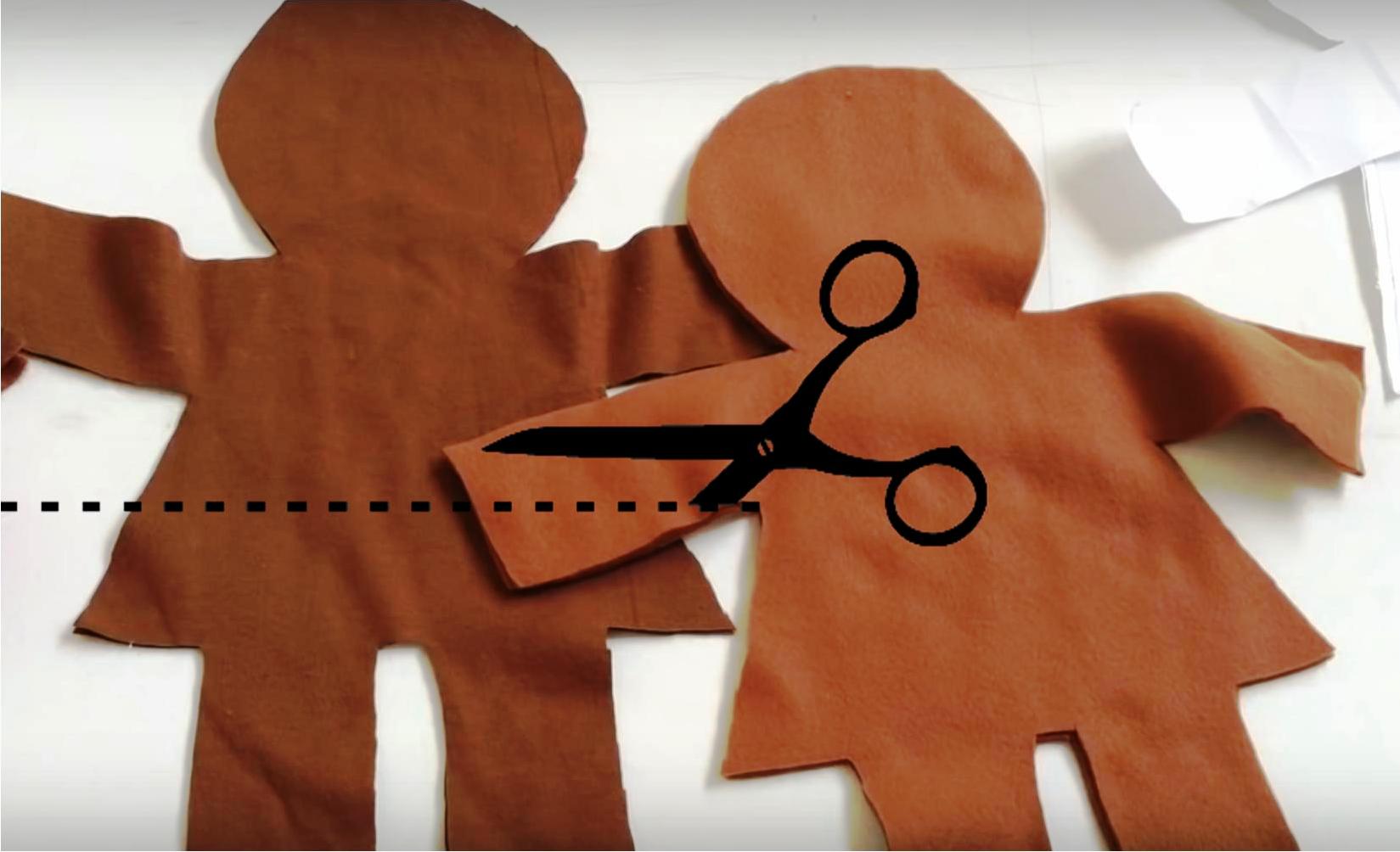 Cut from the Same Cloth

What “common ground” and “shared interest” does Ganoune Diop have with these top agents of Rome? They are all cut from the same cloth. Diop is attending the same Roman Catholic seminary that prominent leaders in Rome have already gone through.

This is undoubtedly a very serious situation when some of the highest leaders of both the Roman Catholic Church and the Seventh-day Adventist Church are products of the same theological institution. To be more frank, Ganaoune Diop is currently gaining more “wisdom” and “knowledge” to use in denominational employment for his work at the General Conference. He is being trained to help with church ministry, and the education is coming from the same school where prominent Roman Catholic theologians and leaders are being taught by Rome.

Not Just Any Catholic Institution

Ganoune Diop has earned a PhD candidacy from the Institut Catholique de Paris (Catholic University of Paris). This means that he has completed all of his coursework, classes and examinations and is currently working on his thesis/dissertation at this Roman Catholic institution. This is not just any ordinary Catholic institution – it is a university that prides itself in providing “training which meet the academic standards of the Holy See.” [2]

There are two sources that confirm Ganoune Diop’s affiliation with the Institut Catholique de Paris (Catholic University of Paris). One comes from a Seventh-day Adventist source. [3] 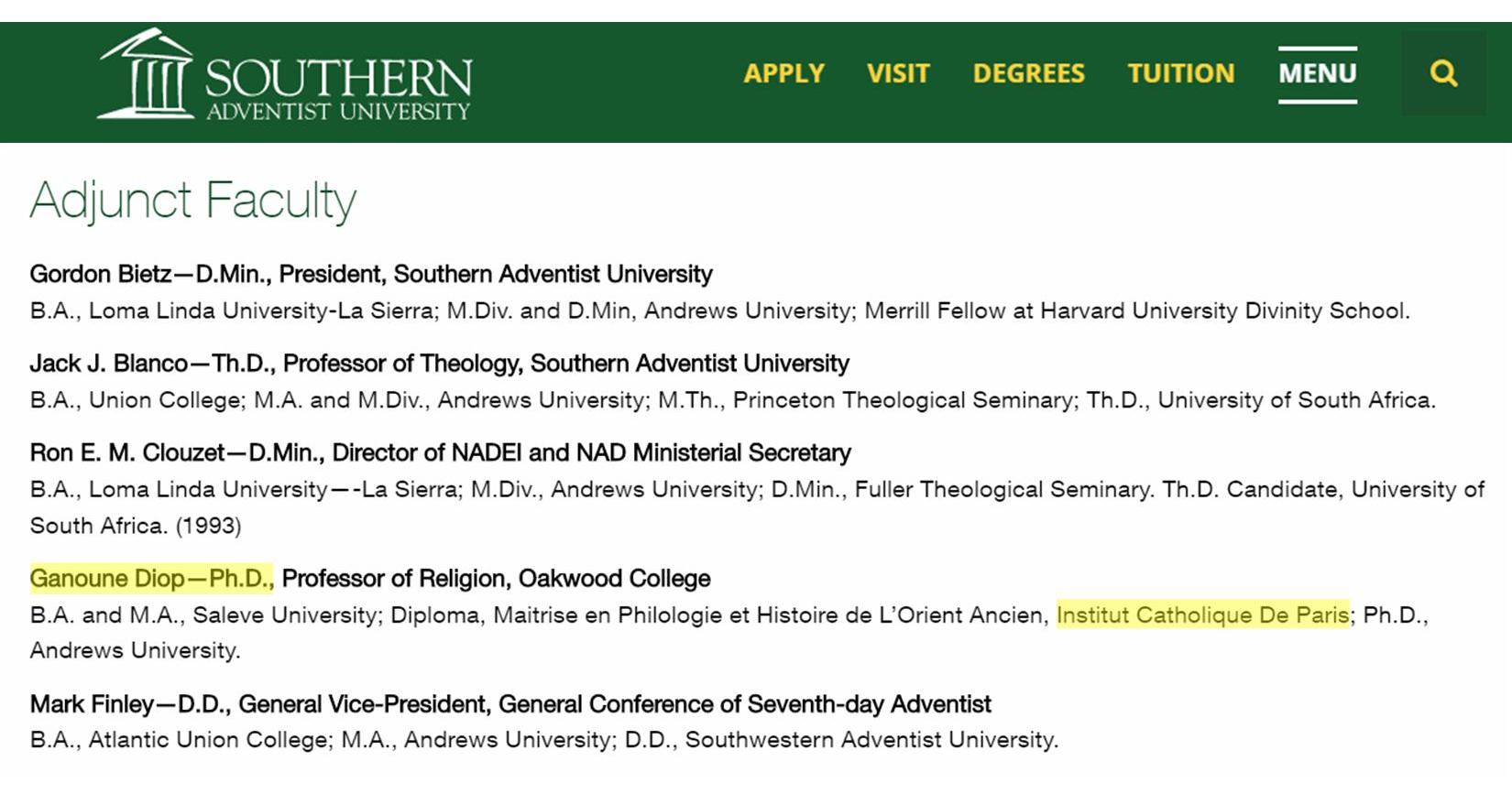 The second source comes from Ganoune Diop’s biography page published by the Declaration of Human Rights website. [4] Ganoune Diop was one of the signers during an event which took place in 2018. Several churches and organizations met together at this time. [5] 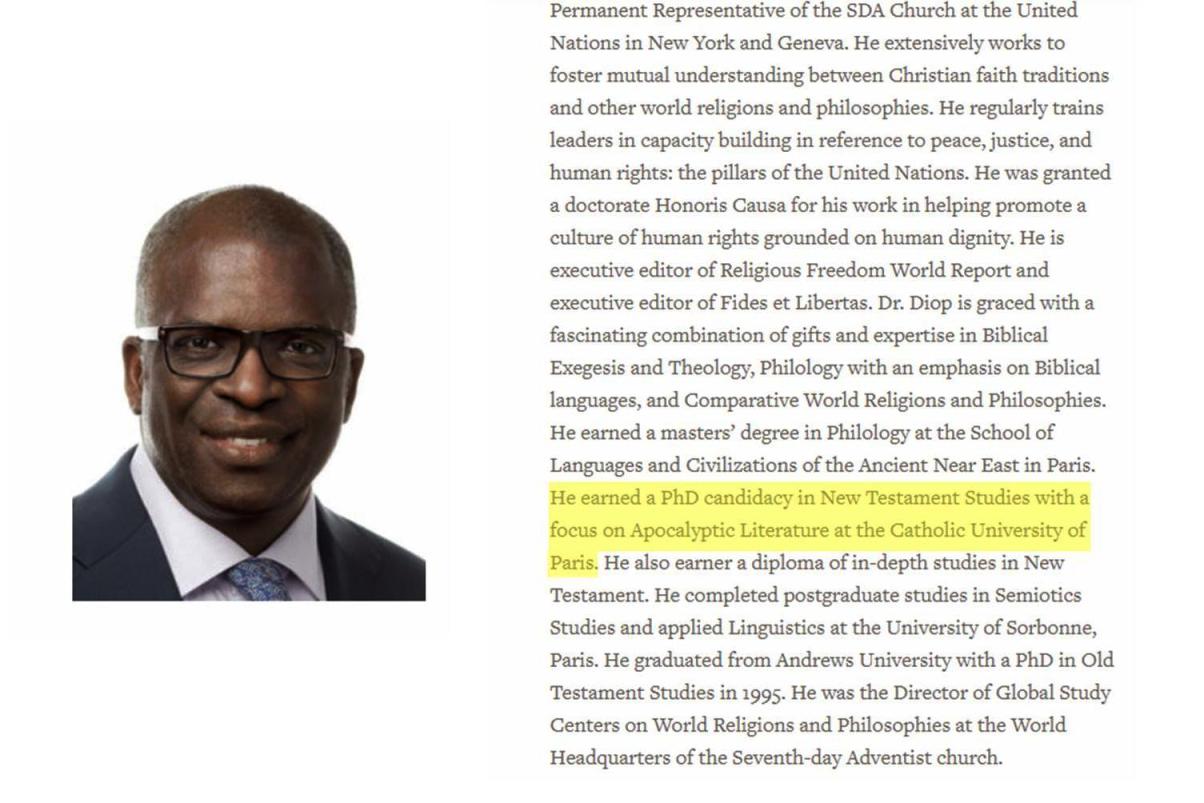 This is Ganoune Diop’s bio from the Declaration of Human Rights website that describes his PhD candidacy at the Catholic University of Paris. [4]

The top Roman Catholic Cardinals mentioned above have also studied at this very same university. [6] Are we to suppose to imagine that when our church leaders attend Roman Catholic seminaries, certified by the Holy See (Vatican), that they will acquire a greater love and appreciation for The Three Angels’ Message? On the contrary, Rome’s theological schools have two primary objectives:

Why are we getting special training by institutions that repudiate the fundamental principles of Adventism? Do we not see the enormous risk we take when we appoint men into positions of trust who were trained by the enemies of present truth? No cause is ever without an effect; and when SDA leaders are trained with the “academic standards of the Holy See” these decisions have a profound effect upon God’s people as a whole.

“And there are some who, having secured this worldly education, think that they can introduce it into our schools. But let me tell you that you must not take what the world calls the higher education and bring it into our schools and sanitariums and churches. We need to understand these things. I speak to you definitely. This must not be done.” (Fundamentals of Christian Education, pp. 535, 536).

What good is accomplished when leaders are “nurtured” or “trained” by institutions that applaud tradition, philosophy and the changing of God’s commandments? What can a school of theology owned by Rome teach God’s people? What messages can we hope to learn from them, if not to abandon our unique calling and witness, abandon the commandments of God, recant the “distinguishing truths” of the faith, and return with them to Babylon!?! This is precisely what we have been seeing during the last 60 years. In reality, it is not “higher education” that church leaders are learning in Roman Catholic seminaries; actually, it is a “lower education” which leads to a departure from our historic beliefs and values.

“Can two walk together, except they be agreed?” Amos 3:3.

The servant of the Lord presents only two classes of people who do not “walk together” but who are actually standing irreconcilably apart from each other. There should be a clear line of distinction in education, behavior, and lifestyle between those who belong to God and those who do not.

“All society is ranging into two great classes, the obedient and the disobedient. Among which class shall we be found? Those who keep God’s commandments, those who live not by bread alone, but by every word that proceedeth out of the mouth of God, compose the church of the living God. Those who choose to follow Antichrist are subjects of the great apostate. Ranged under the banner of Satan, they break God’s law, and lead others to break it. They endeavor so to frame the laws of nations that men shall show their loyalty to earthly governments by trampling upon the laws of God’s kingdom.’ Manuscript Releases Vol. 1, pp. 295, 296.

We are told through inspiration that if we continue to lower God’s standard of truth then we will enjoy peace with the “dragon.” But when we hold up high our banner of truth and unfurl its message to the world then the wrath of the dragon will become manifest:

“It is because the saints are keeping all ten of the commandments that the dragon makes war upon them. If they will lower the standard and yield the peculiarities of their faith, the dragon will be at peace; but they excite his ire because they have dared to raise the standard and unfurl their banner in opposition to the Protestant world, who are worshiping the institution of papacy.” (Testimonies, Vol. 1, p. 223).

The decision to train our leaders in Catholic seminaries will be seen as a positive step by Rome. This is helping to heal the divisions within the ecumenical family. The more we lower our standard of truth and the more we send our leaders to get special training and nurturing by Rome, the faster we will strengthen the bonds of interfaith unity and cooperation.

Unfortunately, many Seventh-day Adventist leaders and brethren will see this as a good thing. Personally, I see this as another example of how the church is being sold down the river without a paddle and is “drifting away to sea, without chart or compass” (Review and Herald, July 24, 1888).