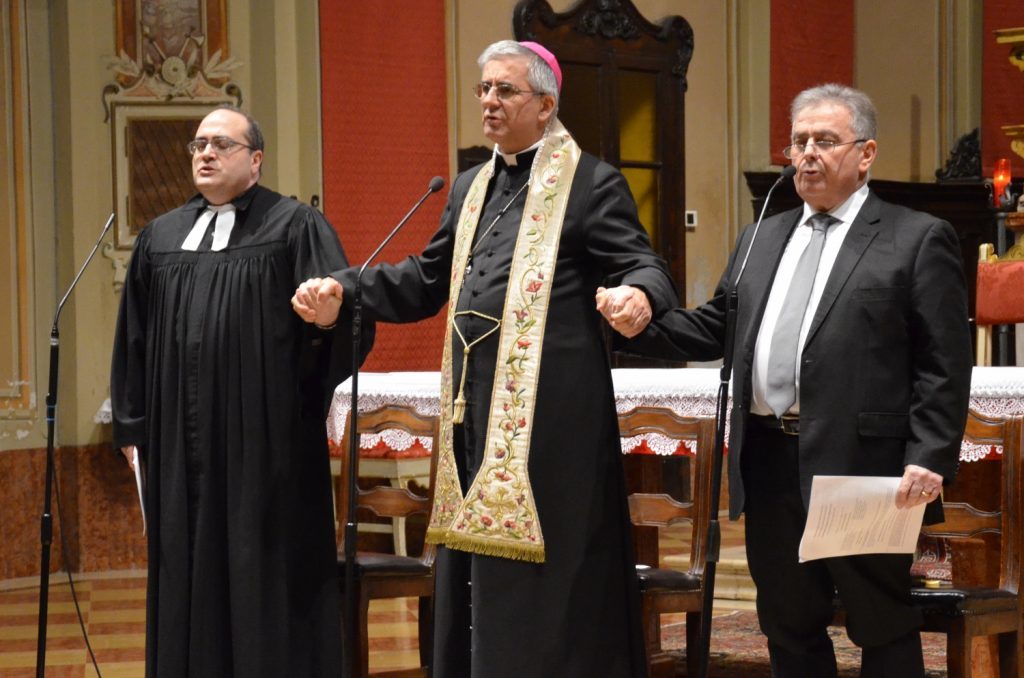 “Protestantism shall stretch her hand across the gulf to grasp the hand of the Roman power” (Maranatha, p. 216)

Earlier this year Methodists, Roman Catholics and Seventh-day Adventists held hands during an ecumenical prayer vigil in Cremona, Italy. These men locked hands in public in a show of unity and solidarity in Northern Italy.

This news item, as in most cases, was not made available by any Seventh-day Adventist news outlet. It was the Roman Catholic Diocese of Cremona who published this photo and reported that this event was an “ecumenical prayer vigil to celebrate Christian unity.” [1]

Seventh-day Adventists were not raised up as a people to grasp the hand of Romanism. We were raised up to give a very special warning message to the world. What is that startling message that God has commissioned us to preach? It is the Three Angels’ Message found in Revelation 14:6-12. These messages need to be heard in every Adventist pulpit and in every Adventist church around the world more than ever before.

There is a great urgency for God’s people to move forward with these special messages because the whole world is wondering after the beast in search for unity. Many are abandoning our distinctive, end-time messages for the sake of “grasping” the hand of Rome. 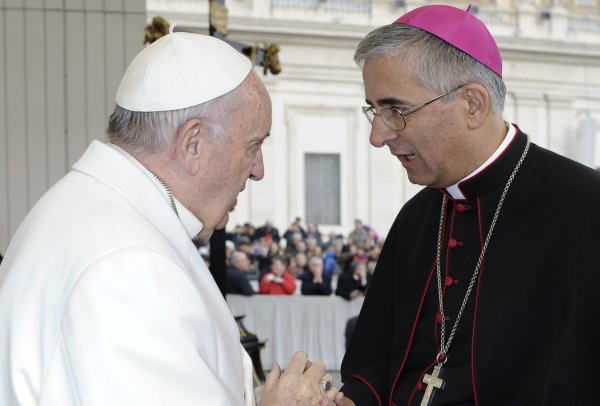 Connecting the dots: Bishop Antonio Napolioni, who is pictured above holding the hands of Seventh-day Adventists, is now holding hands with Pope Francis.

Today, the entire religious world is wondering after the beast (Revelation 13:3). Protestants no longer protest the abominations and drunkenness of this beast power. Martin Luther, John Calvin, Huss and Jerome and all the founders of the Protestant movement were clear in the identity of this dangerous power. They all understood that it was essential to separate from the fellowship of Rome in order to preserve the purity of the gospel and to fulfill their God-given mission.

Sadly, the Reformers have abandoned their protest and have been reaching across the gulf to grasp the hand of Rome. It is because of this apostasy that God has raised up the Seventh-day Adventist people to reform the Reformation. The Three Angels’ Message is a Reformation message. Tragically, many of our own people are also embracing Romanism. This has lead to the abandonment of our distinctive mission and message in many churches.

Many pastors and leaders have been trying to foster peace with all the different religious faiths around the world when they should be giving the straight testimony. The straight testimony of the Third Angel would startle the world and awaken them up to what is really going on. Failure in giving this warning is causing us to lose the power of the Three Angels’ Message. These great pillars of our faith are being removed and replaced with the same watered-down message that Rome and the Evangelical churches are preaching. This is where we are at today.

To any concerned, faithful Seventh-day Adventist – Ellen White has stated that “the Lord Himself will call men, as of old He called the humble fishermen, and will Himself give them the education He desires them to have. He will call men from the plow and from other occupations to give the last note of warning to perishing souls” (Publishing Ministry, p. 278).

God Himself will have to call and train workers after His own order to give the last warning message to the world. Why? Because many of our pastors and leaders have become members in these ecumenical organizations. And as long as they remain part of those interfaith associations, they cannot preach our distinctive doctrines.

Many pastors have been trained to think ecumenically. Whenever Seventh-day Adventists downplay their distinctive beliefs and just focus on the points of doctrine which everyone else believes in – this is called ecumenism. This will result in the loss of souls, including our own.

Many are endorsing this non-threatening and non-offensive style of approach. However, inspiration instructs us to do the exact opposite. We are told that when the world resists and opposes our preaching – this will be proof that we are giving the true message for our time:

“The third angel is represented as flying in the midst of heaven, symbolizing the work of those who proclaim the first, second, and third angel’s messages; all are linked together. The evidences of the abiding, everliving truth of these grand messages that mean so much to us, that have awakened such intense opposition from the religious world, are not extinct. Satan is constantly seeking to cast his hellish shadow about these messages, so that the remnant people of God shall not clearly discern their import—their time and place—but they live, and are to exert their power upon our religious experience while time shall last” (Selected Messages, Vol. 3, p. 405).