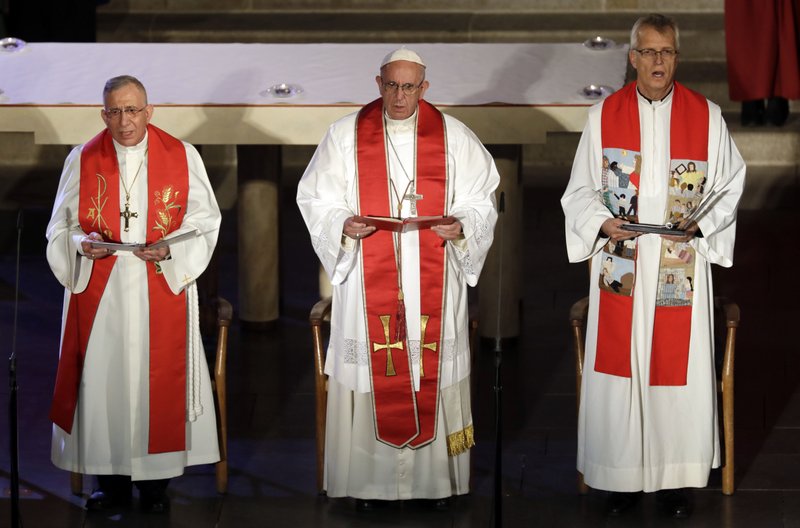 The Protestant Reformation’s greatest moment came when Martin Luther sat in the Diet of Worms during his climatic defense of the Holy Scriptures. Facing the threat of execution, Luther stood on trial before the Roman Catholic Magistrates to answer the accusation of heresy because he was being accused of challenging the Church’s teachings and for defying the pope.  When asked to recant his positions, Luther famously replied with the statement:  “Here I Stand. I cannot do otherwise. God help me.”

Without hesitation, Luther upheld the clear teachings of Scripture above the church and the encyclicals of the pope. He was excommunicated and lived under the threat of martyrdom for the rest of his life. That was how the Reformation began.

Today we are on the path to full unity with the Catholic Church; a church that has not changed any of her doctrines. It is Protestantism that is making all the concessions! The Pope still claims universal authority over the entire Christian world. He still claims infallibility. He claims to be the final authority in religious matters thereby placing himself above God’s Word. The Pope still claims to be the Vicar (representative) of Christ. According to the Bible (John 14:16) the Holy Spirit is Christ’s representative, not a mere man. Rome still claims to forgive sins and they still believe they have the authority to change God’s law. They still command their members to worship and pray to idols, Mary and all the dead saints. They still believe in purgatory, indulgences and tradition.

The doctrinal questions raised by Martin Luther have not been resolved. How can we just ignore this reality? Where are the Reformers who used to protest these aberrations of Scripture? There’s hardly any left. Sadly, we are heading right back into the Dark Ages because the heirs of the Reformers have now rejected the principles of the Reformation. Whenever a people is divorced from their own heritage and belief system they will not stand long. Indeed, Protestants will continue to be blown away with every wind of doctrinal and cultural wind – gay clergy, same-sex marriage, women’s ordination, abortion, and a list of other issues because of her rejection of the Scriptures. This is opening the door to confusion, religious relativism, pluralism and the dilution of Bible doctrine.

“But God will have a people upon the earth to maintain the Bible, and the Bible only, as the standard of all doctrines, and the basis of all reforms. The opinions of learned men, the deductions of science, the creeds or decisions of ecclesiastical councils, as numerous and discordant as are the churches which they represent, the voice of the majority,—not one or all of these should be regarded as evidence for or against any point of religious faith. Before accepting any doctrine or precept, we should demand a plain Thus saith the Lord” in its support” (Great Controversy, 595).