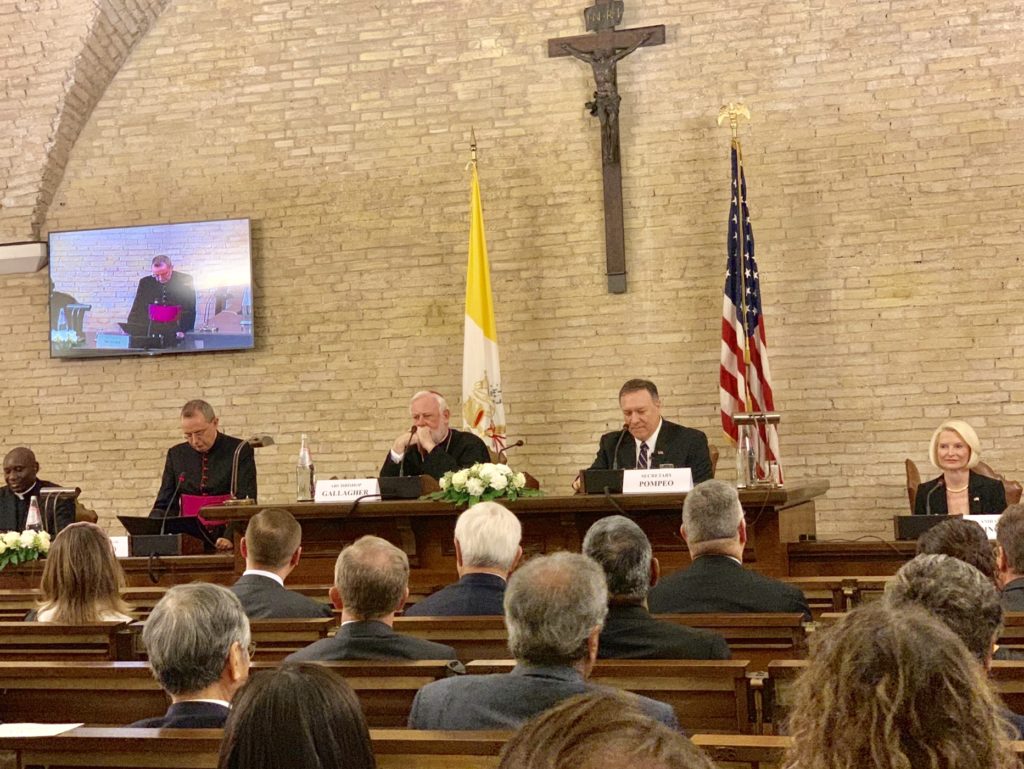 This US-Vatican symposium was held October 2, 2019. Photo: US Embassy at the Vatican.

On October 2, 2019 the United States government and the Vatican held a high level symposium on the need of promoting religious freedom. The event was called “Pathways to Achieving Human Dignity: Partnering with Faith-Based Organizations.” [1] They discussed the importance of the US and Vatican to partner together with faith-based organizations to advance religious liberty, combat human trafficking, climate change and providing humanitarian aid.

US Secretary of State Mike Pompeo and Vatican Secretary for Relations with States Archbishop Paul Gallagher led out in this event designed to build a society which could truly be “tolerant” and “inclusive.” However, what is extremely troubling is to see the two great powers of Bible prophecy (US and Rome) coming together to promote ‘Laudato Si’ and to attempt to get all the churches involved. 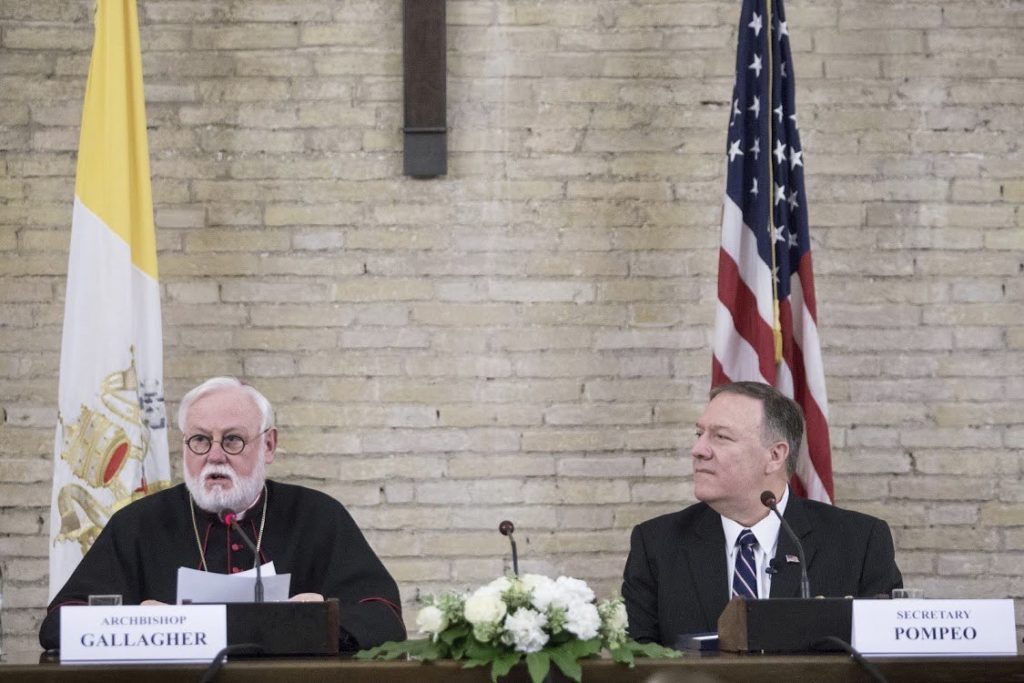 “I also wish to emphasize that while responding to humanitarian emergencies, the Holy See believes that it is urgent to address the root causes of such crises, such as horrific wars, persecutions, human rights violations, political or social instability, extreme poverty, consequences of climate change, and so on. In this regard, it is important to remember the call of Pope Francis, in “Laudato sì”, for an integral ecology that underscores the link between the protection of the environment, the fight against poverty, social justice, economy and politics.” [2]

According to Rome, all of the world’s problems will be solved as soon as the Pope’s encyclical becomes law. Unbelievable! Now notice how this same Vatican official describes creating some kind of international ecumenical council to impose this agenda:

“It would be valuable also to develop an international network of religious leaders and people of good will to build tolerance, fraternity and healthy pluralism …  a healthy pluralism which respects differences and values them as such.” [2]

Brother and sisters, the handwriting is on the wall! The Pope’s encyclical ‘Laudato Si’ has a provision for Sunday rest. Now we see the Vatican and the United States (Revelation 13) coming together to agitate ‘Laudato Si’ to the world. They are also calling on all the churches to join them in the international spotlight to work together to create “Pathways to Achieving Human Dignity.” These “pathways” include the implementation of ‘Laudato Si.’ 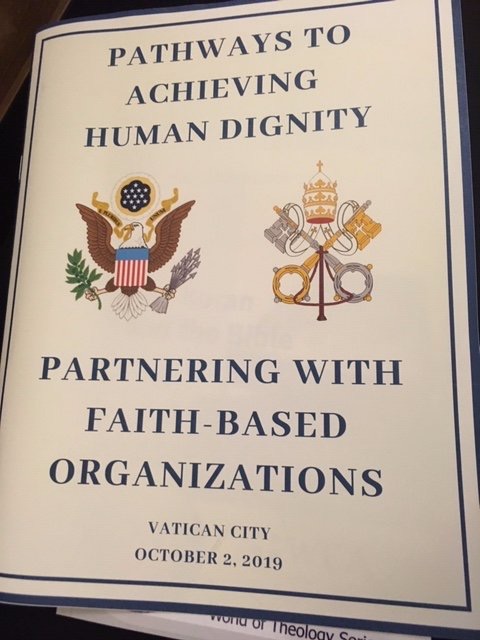 Section #237. On Sunday, our participation in the Eucharist has special importance. Sunday, like the Jewish Sabbath, is meant to be a day which heals our relationships with God, with ourselves, with others and with the world. Sunday is the day of the Resurrection, the “first day” of the new creation, whose first fruits are the Lord’s risen humanity, the pledge of the final transfiguration of all created reality. It also proclaims “man’s eternal rest in God”. In this way, Christian spirituality incorporates the value of relaxation and festivity. [3]

Section #179. Because the enforcement of laws is at times inadequate due to corruption, public pressure has to be exerted in order to bring about decisive political action. Society, through non-governmental organizations and intermediate groups, must put pressure on governments to develop more rigorous regulations, procedures and controls. Unless citizens control political power – national, regional and municipal – it will not be possible to control damage to the environment. Local legislation can be more effective, too, if agreements exist between neighbouring communities to support the same environmental policies. [3]

“The Sunday movement is now making its way in darkness. The leaders are concealing the true issue, and many who unite in the movement do not themselves see whither the undercurrent is tending” (The Review and Herald Extra, December 11, 1888).

We know that Sunday laws will come and when they do they will discriminate against religious minorities. Sunday laws also benefit and favor the larger Christian population who already keep Sunday holy, but places undue hardships and financial burdens on minorities who keep the Seventh-day Sabbath, or Saturday, as the day of rest. For seventh-day Sabbath (Saturday) keepers to have to abstain from business or work 2 days a week is unfair and discriminatory. That is why Sunday laws give an unfair advantage to Sunday-keepers who already keep Sunday as the day of rest.

And most importantly, the Seventh-day Sabbath (Saturday) is the foundation of true worship to God (Exodus 20:8-11; Hebrews 4:4, 11). Rome is the beast of Bible prophecy (Daniel 7:25) who replaced Saturday with Sunday in the Fourth Century during the Council of Laodicea 363-364 A.D., Canon 29.

In light of Bible prophecy, in light of this historical meeting between the United States and the Vatican, in light of the dangers against true religious liberty and in light of the law of God that becomes desecrated by the exaltation of Sunday –  it’s time to take a stand against anyone who may be thinking of introducing ‘Laudato Si’ through some climate change legislation.

Instead of supporting the radical climate change agenda, every Seventh-day Adventist must be raising up a voice against any measure that would introduce stricter Sunday rest enforcement through stealth.