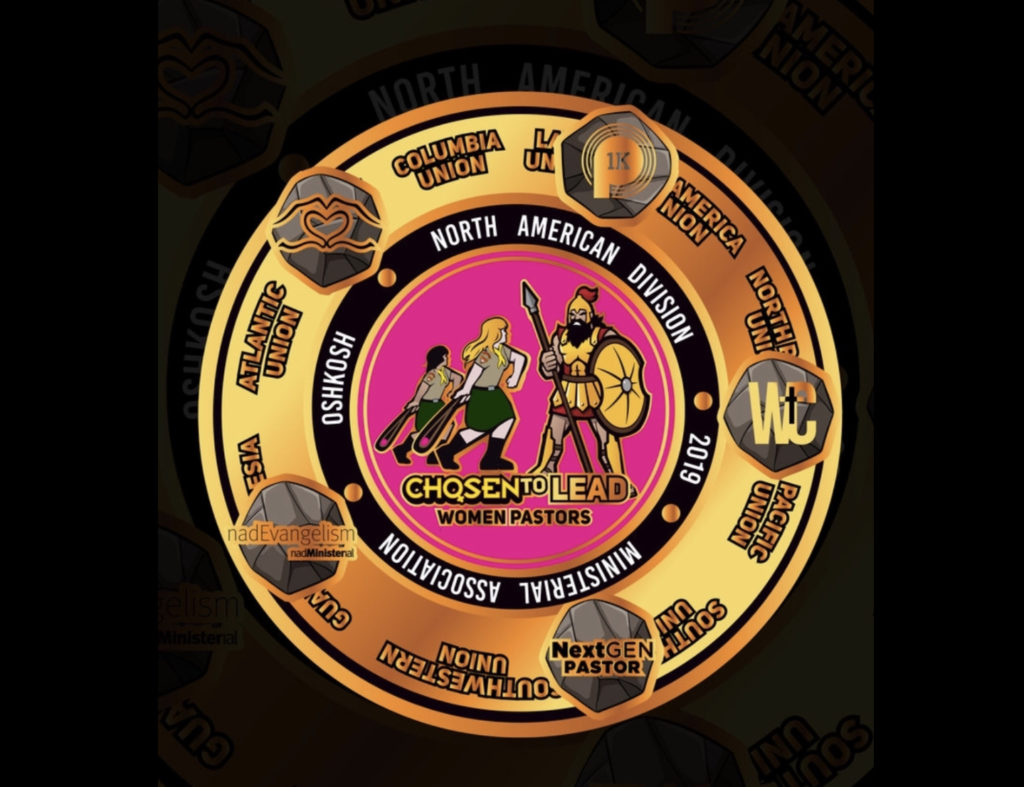 Women’s ordination advocates at the North American Division of Seventh-day Adventists [NAD] are making great progress in their recruiting efforts to bring many more women into pastoral positions within the church. They are now targeting young, unsuspecting Adventist girls with their radical feminist advocacy.

A new “Chosen to Lead – Women Pastor” pin will become available to all young Seventh-day Adventist girls who are members of the Pathfinders organization. Notice what the purpose of this new pin is for, according to the the NAD:

“If you are a girl, young woman, desiring to become a pastor in the future or considering this option, even if you have not made your mind up yet, you will receive this pin as a gift. You can claim this gift at the North American Division Ministerial Association Booth (Booth #513 in Hangar A).”

“There you will also be able to visit with the North American Division Ministerial Team. These are your Pastors’ Pastors, who will be available to pray with you and encourage you as you contemplate the possibility of serving God as a pastor in the future.”

“Current women clergy, who are present at the Camporee can also claim a pin at the North American Division Ministerial Booth.”

“This pin features two Pathfinder girls confidently facing the giant. Intentionally designed with the purpose to affirm and encourage girls in North America who fearlessly have accepted or will accept the call of God to Pastoral Ministry. God calls and enables girls just as He called and enabled David.” [1]

What’s even more disturbing is how the liberals in the church purposely take advantage of the young to push their gender equality propaganda upon church families without any consent, discussion or opinions. We need to understand that feminism along with ecumenism, environmentalism, political activism and the emotionally driven rock music are all part of an attack to bring confusion to the mission and message of the Adventist people.

We are looking to the emergent church movement and to the popular liberal trends to see how we can drag these worldly elements into the church. One of the more recent, popular trends within the liberal churches is to bring in as many female pastors as possible and to ordain them whenever possible.

The vast majority of Protestant denominations didn’t even have women pastors until just only recently. The push to ordain women into the ministry started taking off in the 1960s – at the same time that feminism was exploding worldwide. The global women’s ordination movement was the result of liberal philosophy making its way into the Protestant churches. This is what began to influence the new liberal thinking.

Prior to the 1960s almost every major denomination rejected women pastors and women’s ordination. The trend among liberal churches to ordain women pastors can be seen in the following list.

The reality is that women’s ordination is a modern, recent phenomena. The question to ordain women into ministry also represents a theological departure from 2,000 years of consistent Christian history and practice.

Despite this, the new wave of the future is to push women into pastoral roles. These liberal trends will continue not just in Protestantism, but sadly within Adventism. Their objective and resolve is becoming more aggressive as the NAD is now targeting the most young and most vulnerable – our children.

This unbiblical, secular, feminist propaganda is slithering it’s way throughout Adventism and unfortunately our young people will ultimately pay the price for our unwillingness to deal with this apostasy.