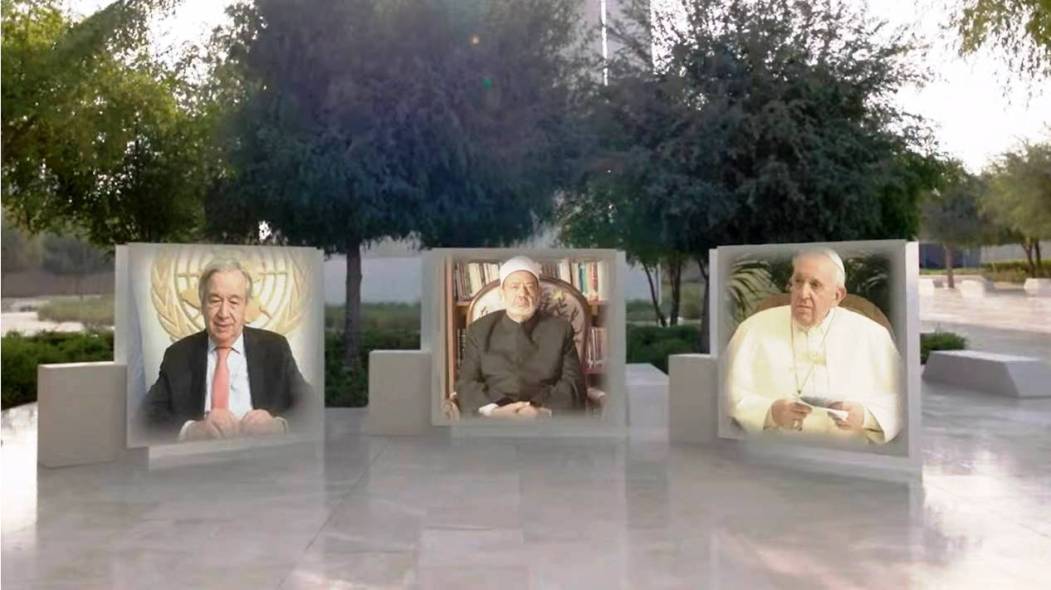 The UN Secretary General, the Grand Imam and Pope Francis.

On February 4, 2021, Pope Francis participated together with the Grand Imam of Al Azhar, Ahmed el Tayeb and the Secretary General of the United Nations, António Guterres, in the World Day of Human Fraternity. Pope Francis did more than just call for unity. He turned up the pressure and the rhetoric by strongly encouraging people to join his new global fraternity with an ultimatum, “we are either brothers or enemies.” The Vatican reported the following:

“Pope Francis also emphasized that despite differences in cultures and traditions, we are brothers and sisters, ‘born of the same Father.’ In this regard, fraternity must be built, not by negotiation, but through respect for our different cultures and traditions. “It is the moment of listening. It is the moment of sincere acceptance. It is the moment of certainty that a world without brothers is a world of enemies,” the Pope said. He further underscored that “we cannot say we are either brothers or not brothers,” stressing rather that “we are either brothers or enemies” because indifference is “a very subtle form of enmity.” [1]

The Vatican also reported that “local Churches” will also be “encouraged” (threatened) to join this annual celebration:

Pope Francis was happy said: “I am very pleased that the nations of the entire world are joining in this celebration, aimed at promoting interreligious and intercultural dialogue.” [2]

“In the future, starting in 2022, with the experience of this first celebration of the International Day of Human Fraternity and with more time to prepare, the local Churches will be encouraged and helped to participate actively with intercultural and interreligious events marking this date.” [2]

The whole world will be forced to participate in the Pope’s global brotherhood, which is a Masonic-style human utopia encompassing humanism, paganism, euthanasia, full-term abortion, gay marriage, the LGBT+ movement, transgender identity, feminism, and other Marxist ideologies. If you don’t join, you are the “enemy.”

Will we join a brotherhood of globalists who are fighting to impose a godless and immoral agenda on the world? Will we join those who promote perversion by suing schools so that little boys and girls can use the same bathrooms and changing rooms? This is Babylon fallen; and will we join them? No. That would be a betrayal of the gospel of Christ. Jesus clearly stated that our true brothers and sisters are those who obey God’s word and do His will:

“There came then his brethren and his mother, and, standing without, sent unto him, calling him. And the multitude sat about him, and they said unto him, Behold, thy mother and thy brethren without seek for thee. And he answered them, saying, Who is my mother, or my brethren? And he looked round about on them which sat about him, and said, Behold my mother and my brethren! For whosoever shall do the will of God, the same is my brother, and my sister, and mother.” Mark 3:31-35.

Our world is divided into two groups with two distinct origins, two distinct characteristics and two distinct destinations. As we come to the end of time, this distinction will become even more evident between those who belong to God and those who do not. Those who follow the teachings of Jesus, who love Him, keep His commandments and preach His gospel are part of the Remnant people (Revelation 12:17; 14:12; 22:14). And those who promote disobedience, moral relativity, man-made traditions and abominable, anti-biblical theories are symbolized by Babylon fallen. (Revelation 18:1-4).

Prophecy accurately predicted that there would be an attempt to force everyone into a great multi-religious and multi-god fraternity in the last days. This worldwide movement is called Babylon and has become “the habitation of devils, and the hold of every foul spirit, and a cage of every unclean and hateful bird” (Revelation 18:2).

Rome’s Request Has Been Granted

Here’s how a “Papal document” turned into a “global day of celebration.” On December 5, 2019, ten months after the signing of the Document on Human Fraternity, ROME REQUESTED AND PROPOSED to the United Nations that “February 4” be officially declared as the World Day of Human Fraternity. Rome told the UN to get it done. Notice what “ACI Prensa” reported. This agency belongs to the EWTN Global Catholic Network family. They reported the following on December 5, 2019:

“Cardinal Ayuso Guixot and Judge Muhammad Abd al-Salam met in New York with the Secretary General of the United Nations, António Guterres, to deliver a message from Pope Francis and the Grand Imam of Al -Azhar Ahmed Al-Tayyeb, in which it is proposed that February 4 be declared World Day of Human Fraternity.” They also requested “the United Nations to participate, together with the Holy See and Al-Azhar, in organizing, in the near future, a world summit of Human Fraternity.” [5]

The Pope sent his letter asking for a day for human fraternity, and the United Nations gave it to him. Rome gets what it wants. Next, the Pope will ask that Sunday be a day of rest for the environment, and he will achieve that too. The UN and the US will be too willing to comply. Truly, prophecy is being fulfilled before our eyes:

As the world joins the universal fraternity of Rome, this will lead to the systematic dismantling of all our freedoms. They are working to revoke the constitutional rights of sovereign nations, and soon all of our liberties will disappear. It would be in everyone’s best interest if our political and religious leaders were to completely sever their association with the Vatican. This is what every true Protestant Christian will be calling for.

As Seventh-day Adventists, we must continue to give the third angel’s message, which warns against the “image of the beast” – when civil powers enforce the teachings of the church. This is the heart of the whole matter during the final crisis, which proves once again that the message ordained by God to be given in these last days is relevant, applicable and a necessary warning to everyone. The entire world is turning to Rome, and we have been given the mission to turn people’s attention to God — to worship the Creator, and not the beast, to keep God’s commandments and not the coming Sunday law of the Antichrist’s New World Order.