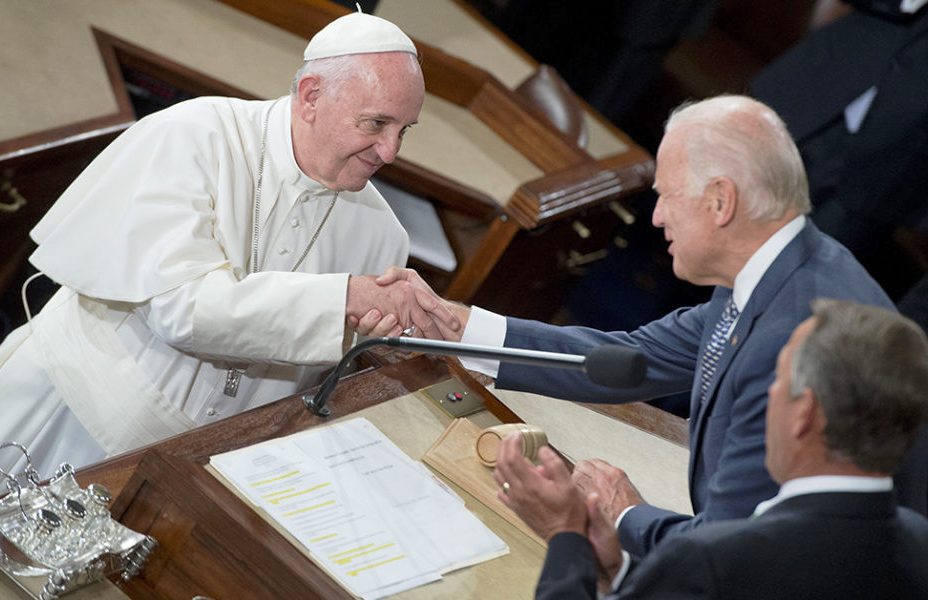 According to a statement released by Joe Biden’s Presidential Transition Team, Joe Biden received a call from Pope Francis congratulating him on his victory. In the phone call, Joe Biden and Pope Francis pledged to work together on their “shared beliefs.” What shared beliefs? Well, climate change was specifically mentioned. Remember, whenever they say “climate change,” they mean Laudato Si.’

President-elect Joe Biden spoke this morning with His Holiness Pope Francis. The President-elect thanked His Holiness for extending blessings and congratulations and noted his appreciation for His Holiness’ leadership in promoting peace, reconciliation and the common bonds of humanity around the world. The President-elect expressed his desire to work together on the basis of a shared belief in the dignity and equality of all humankind on issues such as caring for the marginalized and the poor, addressing the crisis of climate change, and welcoming and intergrading immigrants and refugees into our communities.

A strange new alliance between the Vatican and the Biden transition team is being formed, and it is extremely troubling to see the two great powers of Bible prophecy (US and Rome) coming together to promote Laudato Si.’ It has now become official. The Vatican seems to be full of joy and praise with the presumed victory of Joe Biden. According to Rome, all of the world’s problems will be solved as soon as the Pope’s encyclical becomes law. And according to Joe Biden, he is on board with Laudato Si.’ [1]

Brother and sisters, the handwriting is on the wall! The Pope’s encyclical Laudato Si’ has a provision for a Sunday law. Now we see Pope Francis and Joe Biden (Revelation 13) coming together to agitate Laudato Si’ to the world. In light of Bible prophecy, in light of this historical collaboration, in light of the dangers against true religious liberty and in light of the law of God that becomes desecrated by the exaltation of Sunday – it’s time to take a stand against anyone who may be thinking of introducing Laudato Si’ through some climate change legislation.

Instead of supporting Rome’s radical climate change agenda, every Seventh-day Adventist must be raising up a voice against any measure that would introduce stricter Sunday rest enforcement: