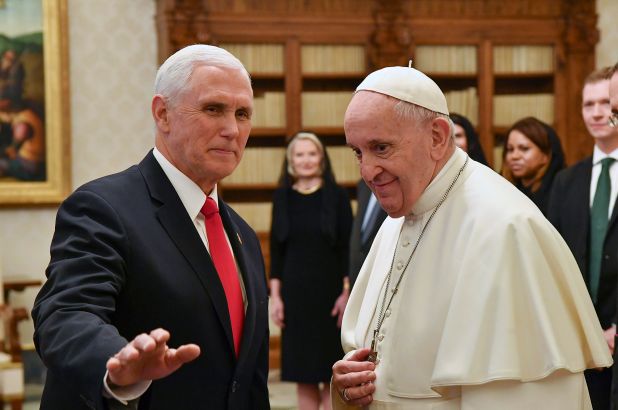 Pope Francis with US Vice President Mike Pence at the Vatican.

Pope Francis is fulfilling his pledge to get the kings of the earth (Revelation 17:12, 13) to endorse his ‘Laudato Si’ climate change encyclical. He gives copies of this document to the different high-level leaders who visit him in Rome with the hope that they will take action and implement his policies in their respective countries.

Remember that the Vatican’s effort to promote the Pope’s encyclical on climate change (Laudato Si) is fulfilling the prophetic criteria given to us in the Bible and Spirit of Prophecy. The Pope’s encyclical is a warning about the imminent climate crisis and addresses the natural disaster phenomenon. According to the actual text, ‘Laudato Si’ has a “Sunday” rest provision (section #237) and an “enforcement of law” provision (section #179). [2]

Here we can see the Pope’s commitment to environmentalism, social justice and Sunday laws. He gave Mike Pence a copy of his climate change encyclical hoping that the Vice President would start advocating  environmental justice at the highest levels in the White House. But it doesn’t appear that Mike Pence will play any role in tackling the so-called ecological crises with President Trump anytime soon.

President Donald Trump’s administration has taken a completely different view on the “climate crisis” than what the Vatican is advocating. Just this week President Trump told leaders at the World Economic Forum in Davos, Switzerland that the promoters of climate change are the “prophets of doom” and “fortune tellers” who are embracing “error.” [3]

It doesn’t appear that the Pope and the President are on the same page, at least not for now. One thing is certain; even though Rome and the current President of the United States seem to be at odds with each other on the climate change issue, we know that in the end prophecy will surely come to pass:

Right now the USA,  through President Trump, is strengthening its economical and political power. Our nations’ influence is growing worldwide. This is a fulfillment of Bible prophecy. A weak nation, both politically and economically, cannot force the world to worship the first beast (papacy). Only a strong, powerful nation that has the ability to bring China, Iran, North Korea and Russia to its knees can fulfill this end-time prophetic role. Trump has expressed that this is his ultimate objective – making America powerful and respected again.

What we see in the book of Revelation is a very close and intimate working relationship between these last two great superpowers of prophecy – the USA and the Vatican. God help us when these two powers finally do get on the same page and pledge to work together to advance their prophetic roles.

For now let us welcome this temporary disunity and division between the Pope and the President. Let us work to spread the gospel of Revelation 14:6-12 before it’s too late.

“The work which the church has failed to do in a time of peace and prosperity, she will have to do in a terrible crisis, under most discouraging, forbidding circumstances.” (Evangelism, p. 31).